Accessibility links
Where's The Change? Gay Activists Ask Many in the gay community expected President Obama to be a fierce ally. But as the administration moves slowly on issues important to gays, some activists suggest it's time to be more demanding of Obama. 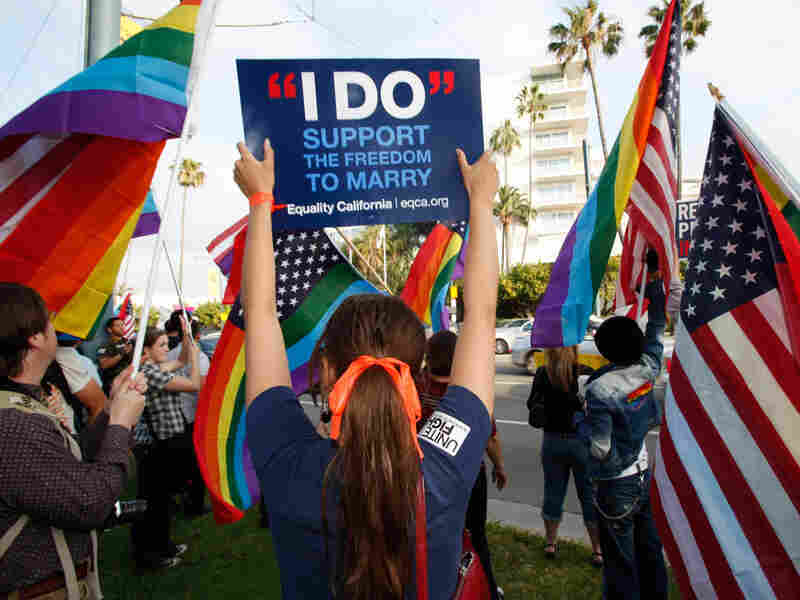 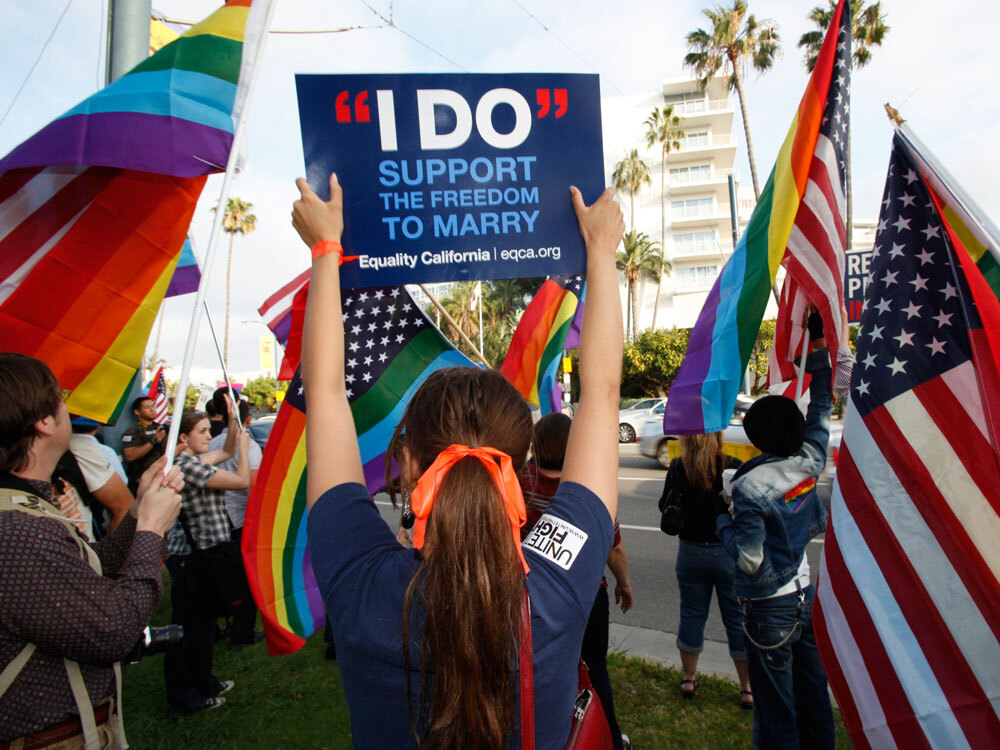 Gay-rights supporters demonstrate outside the Beverly Hills hotel in California, where President Obama attended a Democratic Party fundraiser in May.

Vermont on Tuesday joined five other states that have given same-sex couples the right to marry. That situation was almost unimaginable a decade ago, when, after rancorous debate, the state became the first in the union to enact same-sex civil unions.

But despite the historic gains made by the nation's gay community, this year has largely been one of disappointment for many whose hopes were pinned on President Obama's promise of change after two terms of an openly hostile Republican administration.

"People were shellshocked from the last eight years," says Michael Joseph Gross, a New York-based writer whose recent piece about Obama and the gay community, "Hope and History," appeared in The Advocate, a national gay and lesbian newsmagazine.

Obama supports civil unions, but he has never come out publicly in support of same-sex marriage. Nonetheless, Gross says, the gay community saw in Obama a fierce ally in the White House. And as recently as June, the president pledged to "bring the full spectrum of equal rights to LGBT Americans."

"This was supposed to be the easy part," Gross says.

It hasn't turned out that way.

The battle over same-sex marriage continues to play out in the states: Maine has approved marriage equality but may face a challenge in November. New Hampshire's same-sex-marriage bill takes effect Jan, 1, 2010.

Their suit is looked at with both fascination and trepidation by gay leaders: The case has brought wide attention to the issue, but if it goes to the U.S. Supreme Court and the lawyers lose, it could be a major setback for ongoing same-sex-marriage efforts.

The tone was set on Inauguration Day, when the newly elected president had megachurch Rev. Rick Warren, a vigorous opponent of same-sex marriage, deliver the invocation.

Warren's appearance on the dais with Obama came on the heels of California's Proposition 8, a voter-approved constitutional amendment that banned gay marriage mere months after the state Supreme Court had affirmed same-sex-marriage rights. Warren and Proposition 8 amounted to what many activists described as a one-two punch.

The punches, they say, continued. By May, Justice Department lawyers, obligated to respond to a court challenge in California, wrote a strong brief defending the Defense of Marriage Act, or DOMA, the federal law that bars same-sex couples from marrying or receiving benefits that typically flow from marriage.

Big Democratic donors, furious at the contents of the brief — which, in part, compared same-sex unions to incest and pedophilia — boycotted a major Democratic Party fundraiser in Washington. David Mixner, a former adviser to President Clinton, asserted that the brief "could have been written by the Rev. Pat Robertson," a conservative Christian who has said that gay marriage could lead to child molestation and bestiality.

Justice Department lawyers rewrote the brief last month, toning down the language and asserting that the administration views DOMA as "discriminatory and supports its repeal."

The administration's slow action on issues important to LGBT Americans has also sown divisions and confusion within the ranks of movement leaders and grass-roots networks.

"There are divisions over what people think should be priorities," said one national organizer, who asked not to be identified.

Many generous donors, tapped out by the massively expensive and unsuccessful battle against Proposition 8, have opposed a movement to challenge the California ban next year, preferring, they say, to regroup for a 2012 presidential election-year push.

Some are questioning the costs of a planned October march on Washington, which has not drawn the support and enthusiasm organizers had hoped. Others are agitating against complacency, urging leaders and grass-roots activists to become more visibly demanding of Obama.

"We can't wait for someone else to do this for us," Gross says, adding, "President Lyndon Johnson didn't wake up one day and decide to do the right thing for blacks in America. American blacks forced him."

No issue has drawn more attention and acrimony than Obama's slow walk to changing the U.S. military policy known as "Don't Ask, Don't Tell," which bars openly gay Americans from serving in the armed forces. And no issue, LGBT leaders say, provides the president a cleaner path to action.

"The political reality is that the president and the secretary of defense have made promises based on pressure from the gay community," says Aaron Belkin, director of the Michael D. Palm Center, a public policy think tank at the University of California, Santa Barbara. 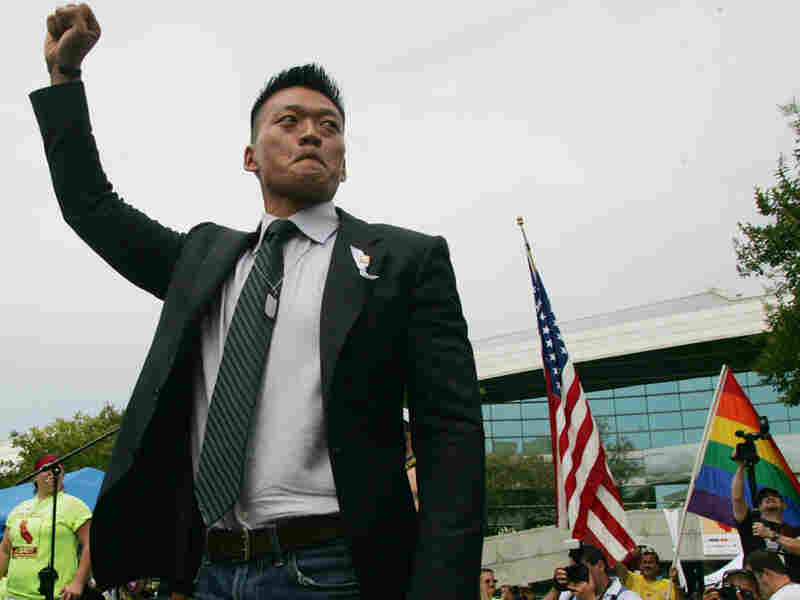 Lt. Dan Choi, an Iraq combat veteran, was discharged under the Don't Ask, Don't Tell policy. Above, he appears at a rally in Fresno, Calif., in May to protest the California Supreme Court decision to uphold Proposition 8, which bans gay marriage in the state. Gary Kazanjian/AP hide caption 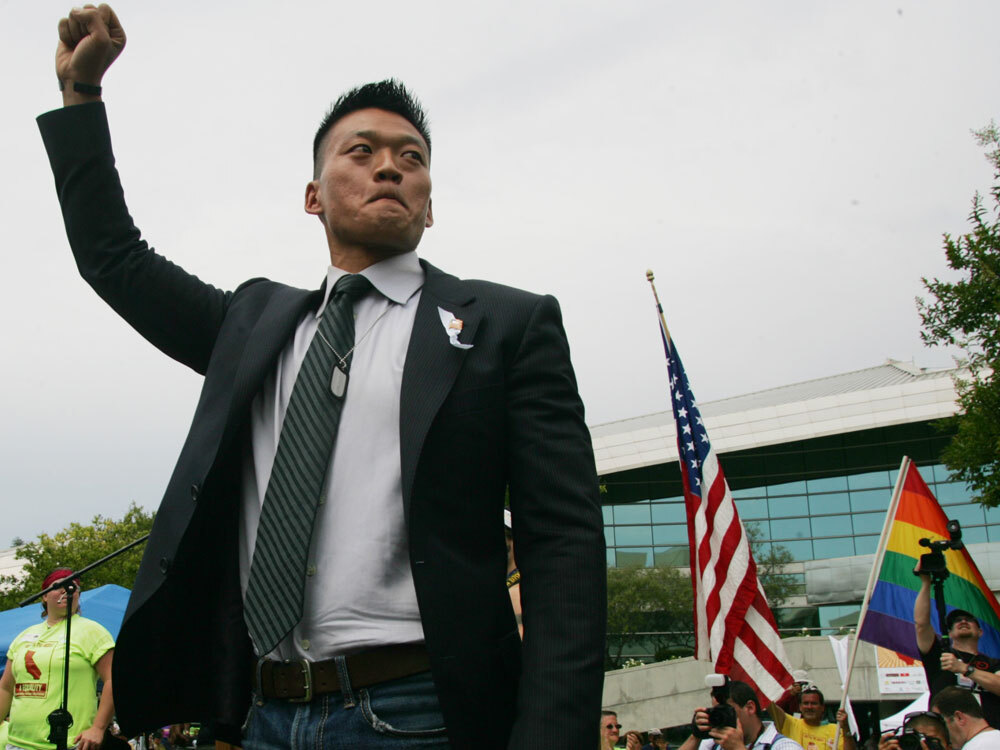 Lt. Dan Choi, an Iraq combat veteran, was discharged under the Don't Ask, Don't Tell policy. Above, he appears at a rally in Fresno, Calif., in May to protest the California Supreme Court decision to uphold Proposition 8, which bans gay marriage in the state.

Belkin is among those calling on Obama to issue an executive order halting the implementation of the policy, while efforts at legislative change chug through Congress. At least 265 service members have been dismissed because of their sexual orientation since Obama became president; more than 13,000 have been ousted since the policy was adopted.

During the campaign, Obama said he would ask the Defense Department and senior command in every service branch to develop an "action plan" for repealing Don't Ask, Don't Tell. He also pledged to develop procedures for bringing back into the military those ousted because of their sexual orientation.

His campaign promises came at time when national support for repealing the policy hit 75 percent, according to an ABC News/Washington Post poll taken in July 2008, on the 15th anniversary of the policy. It marked a dramatic shift in public opinion over the life of the policy: In 1993, the pollsters said, only 44 percent said they believed that openly gay Americans should be allowed to serve.

Obama has said he would like to see the policy repealed "sooner rather than later." But he has resisted calls for an executive order, preferring, he says, to allow the matter to move though Congress for a more durable fix. Defense Secretary Robert Gates has said he would consider rewriting Pentagon regulations to relax the policy, though nothing formal has been released.

That's not good enough for Belkin and Gross, who both talk about the ouster of West Point graduate Dan Choi, a member of the Army National Guard and fluent in Arabic. After returning from Iraq, Choi was booted from the military when he came out as a gay man.

Advocates like Belkin see little chance for congressional action, given the competing policy initiatives on the Hill this fall — from health care to climate change — and a rapidly closing window of political opportunity as the 2010 midterm elections approach.

But the next time a soldier is ousted for being gay, Gross says, activists should put down their rainbow flags and head to the service members' military base.

"Let's just stand there until we're moved and put into jail," Gross says. "Let's get to the point where the government has to do something with us, and the nation has to see that we're willing to give up our freedom for our freedom."

Gay leaders cite some progress under the new administration: Obama has promised to sign proposed federal hate crime legislation that would include people attacked because of their sexual orientation. He also extended some benefits to domestic partners of federal employees, though the provision of health coverage would require congressional approval. And he has voiced support for the Employment Non-Discrimination Act, which would extend federal employment discrimination protections to cover sexual orientation and gender identity.

One thing Obama has accomplished, Gross says, is shattering the hatred of the past eight years.

But with Obama's popularity slipping, and predictions of potentially significant Democratic losses in Congress next year, there remains great anxiety of a lifetime opportunity slipping away.