Accessibility links
Wave Of Violence Strikes Eastern Europe's Gypsies There have been a series of vicious attacks on the minority, also known as Roma, in Eastern Europe this year. Several Roma, including children, have been killed in attacks involving firearms, gasoline bombs and hand grenades. 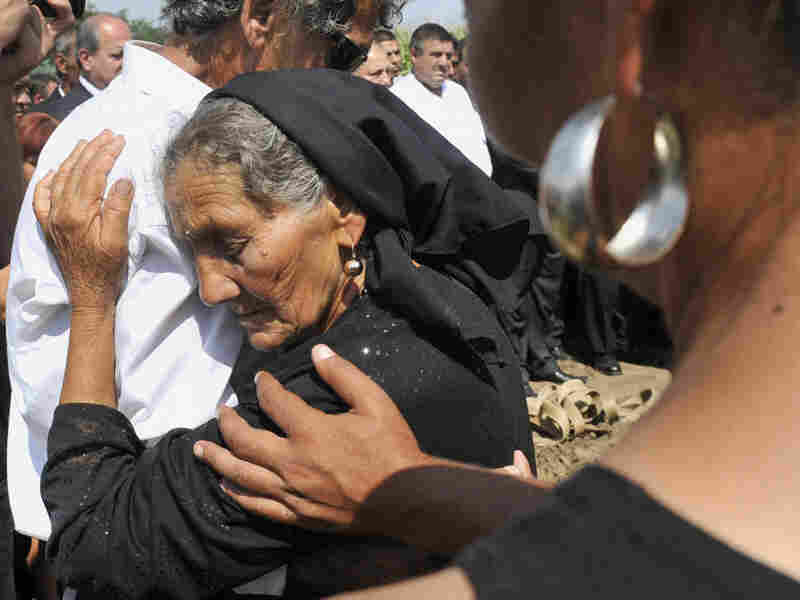 Mariska, mother of Maria Balogh, reacts during her daughter's funeral Aug. 7 in Kisleta, Hungary. Maria Balogh, a Roma (or Gypsy) woman, was shot dead and her 13-year-old daughter seriously injured on Aug. 3, when their house was attacked in the latest of a series of attacks on Gypsies. Bela Szandelszky/AP hide caption 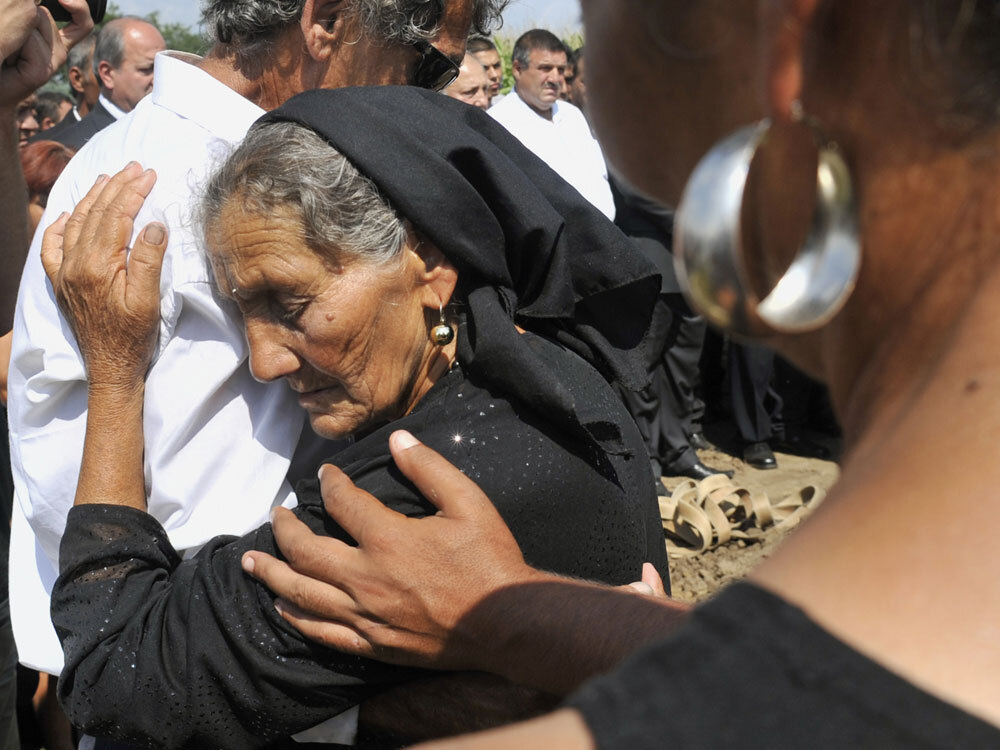 Mariska, mother of Maria Balogh, reacts during her daughter's funeral Aug. 7 in Kisleta, Hungary. Maria Balogh, a Roma (or Gypsy) woman, was shot dead and her 13-year-old daughter seriously injured on Aug. 3, when their house was attacked in the latest of a series of attacks on Gypsies.

The Roma minority, known as Gypsies, unfortunately, are used to discrimination and violent attacks. But recent violence in Eastern Europe has reached a new level of ferocity.

Several Roma, including children, have been killed in attacks this year involving firearms, gasoline bombs and hand grenades. Roma activists blame right-wing groups, which appear to have grown in strength as the economic crisis has deepened across much of Eastern Europe.

The latest victim was single mother Maria Balogh, 45, and her 13-year-old daughter Ketrin. In early August, the Baloghs were asleep in their house in Kisleta, a quiet farming village in northeastern Hungary near the Ukrainian border. An unknown number of armed men broke into their house and fired on the women. Maria was killed, and her daughter remains hospitalized with critical injuries.

Family member Virag Lakatos, 20, who lives near the victims, says Maria worked hard at local agriculture jobs and kept to herself.

"Her husband died a while ago, and she worked very hard to raise her daughter alone," Lakatos says. "She lived for her daughter. Sometimes I walk past her house now, and I keep thinking, why isn't she calling out my name and inviting me in, as usual?"

In February, attackers struck a different rural village in Hungary. They set fire to the Roma family's house during a nighttime attack using a Molotov cocktail, or homemade gasoline bomb. When the father and his 5-year-old son tried to run away, they were shot dead. 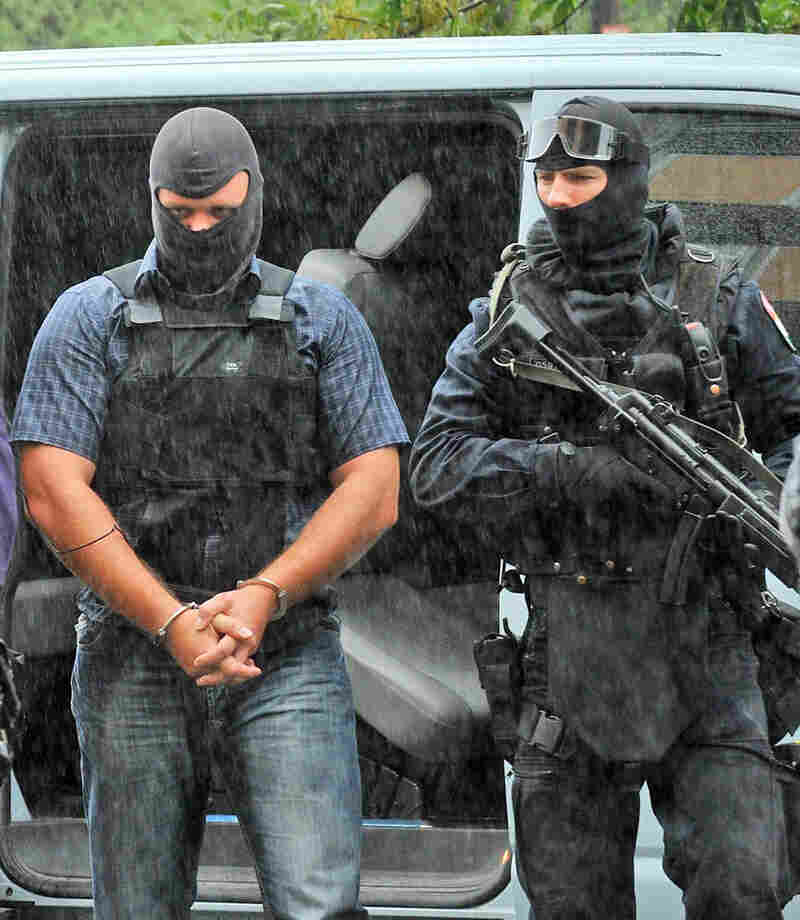 A suspect (left) in a series of deadly attacks against Roma people is hooded and handcuffed as he is led by police officers into a court building for his arraignment hearing Aug. 23 in Budapest, Hungary. A judge ruled to keep him in custody two days after Hungarian police detained four men accused of having committed six murders in nine attacks against Roma people in various settlements of Hungary since July 21, 2008. Szilard Koszticsak/AP/MTI hide caption 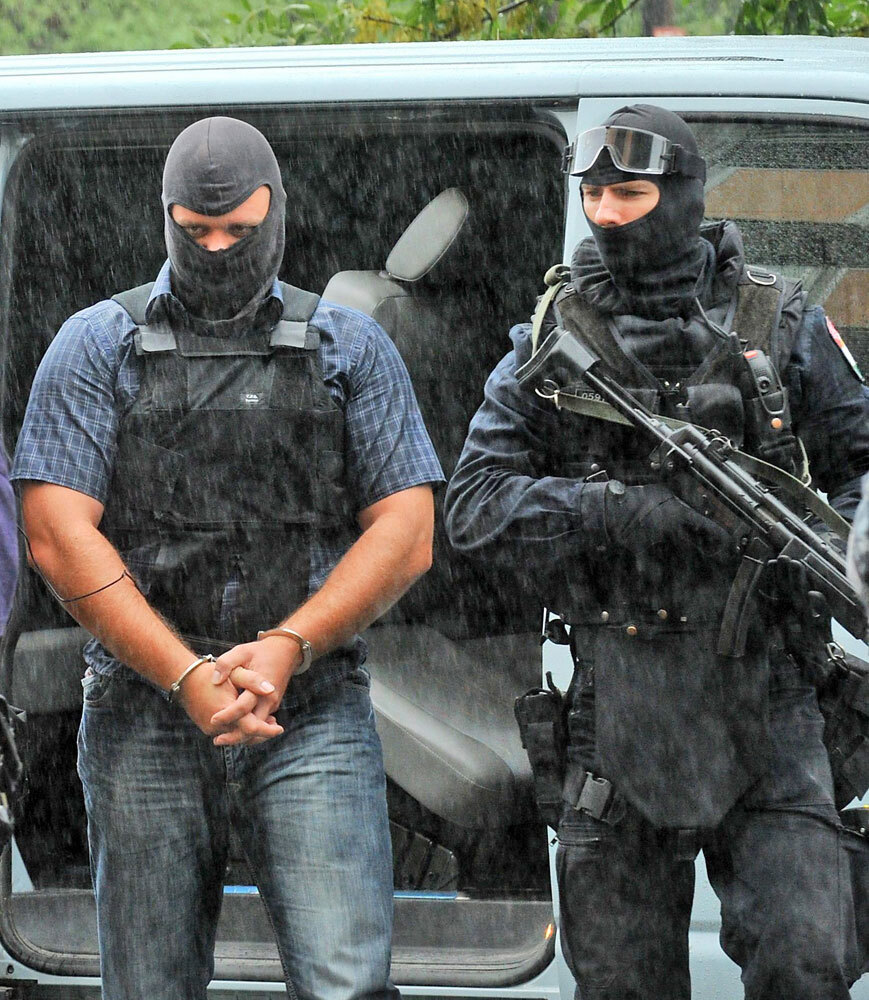 A suspect (left) in a series of deadly attacks against Roma people is hooded and handcuffed as he is led by police officers into a court building for his arraignment hearing Aug. 23 in Budapest, Hungary. A judge ruled to keep him in custody two days after Hungarian police detained four men accused of having committed six murders in nine attacks against Roma people in various settlements of Hungary since July 21, 2008.

Since 2008, Hungary has seen at least nine arson attacks, eight shootings and two assaults involving hand grenades on Roma communities. Violence against Roma also has flared in the Czech Republic, Romania and elsewhere in recent months.

Roma activist Juci Csik walks up to Balogh's freshly dug grave in a small cemetery that hugs a field of tall corn. The grave is covered with pine wreaths and flowers browned by the summer sun. Csik sees the rising violence and intimidation against Roma as a Europe-wide problem.

"In Italy, they also regularly shoot at Gypsies in their caravan settlements outside the cities," Csik says. "In Ireland, there are tensions with the authorities. In the Czech Republic this year, we've seen attacks by gangs using Molotov cocktails and guns, like here in Hungary."

Hungarian police have arrested four men and charged them with murder, attempted murder and arson for alleged involvement in the attacks. Hungarian newspapers report that the suspects were extremists well-known to some police and intelligence officials.

There are questions as to why authorities didn't monitor the group more closely. One of the suspects reportedly was involved in an arson attack on a synagogue in 1995, and another is a neo-Nazi skinhead.

Police are looking for other suspects, but the arrests have done little to calm fears in Kisleta. Roma men are still conducting all-night car and foot patrols of their neighborhoods.

"I'm just defending my family and the other Roma in this village," Istvan Horvath, 28, says. He's staying vigilant, unconvinced that the racist crime wave is over.

"We patrol until dawn," Horvath adds. "But if we see anything suspicious, we stay out longer."

Across Eastern Europe, the Roma population is increasing — and so is resentment as the economic downturn has worsened. The crisis has only sharpened old social tensions.

The government in Hungary predicts that the economy will contract by 6.7 percent this year. Unemployment is rising.

Just 10 blocks away from where Balogh was murdered, wheat and corn farmer Imre Madach says the slumping economy has worsened anti-Roma feelings.

Hungarian government figures show that less than one-quarter of Roma work legally in the country.

Madach says he doesn't condone violence and hate but accuses Roma of being lazy welfare cheats.

"Gypsies don't work but have eight or nine children, and then get all this money from the state to live on," Madach says. "And this state sucks the blood out of the Hungarian working people in high taxes to pay them. It's just not fair! So, of course this sharpens the social tensions."

Roma activists say the Hungarian extreme right-wing Jobbik or "better" party has recklessly stoked the anti-Roma climate. Jobbik is growing in popularity based in large part on an anti-Roma platform. Jobbik leaders regularly lash out at what they call "out of control Gypsy crime" and call for a cut to welfare benefits to the long-term unemployed.

"The motivation can only be racist, as all of the victims are Roma," says Jeno Kaltenbach with the European Roma Rights Center in Budapest. He says Jobbik's fierce anti-Roma rhetoric has contributed to the climate of hate and fear.

"Jobbik uses this [racist] language openly," Kaltenbach says. "It can justify such actions saying 'we are only protecting ourselves against Roma crime.' "

Asked about the anti-Roma attacks, Jobbik spokesman Zsolt Varkonyi points to an attack nearly three years ago in which a mob of Roma attacked and killed a Hungarian man after a traffic altercation. Varkonyi denies that Jobbik's paramilitary wing, the volunteer Hungarian Guard, has anything to do with the recent wave of anti-Roma violence.

"These killings were done so professionally, that it could not be the guy next-door," Varkonyi says. "The members of the Hungarian Guard are the guys from next-door. The professionalism is a sign that it is a secret service. We suspect people in the Slovak Secret Service."

A Hungarian police official says there is no evidence that Slovakian secret agents are behind the anti-Roma violence.

The extreme right-wing party accuses Jews of buying up land across rural Hungary and believes so-called Gypsy crime is the top problem in the country.

Recent polls show between 15 and 18 percent of Hungarians support the party. If those numbers hold through elections next spring, Jobbik is poised to become the third most powerful political party in Hungary.