Accessibility links
Colleges Ramp Up Efforts To Hold On To Students As many as half of all students who attend college might never complete their degrees — and many schools view that as a crisis. At Millersville University outside Lancaster, Pa., retention is a priority — from bonding with students at orientation to spotting depression and risk factors. 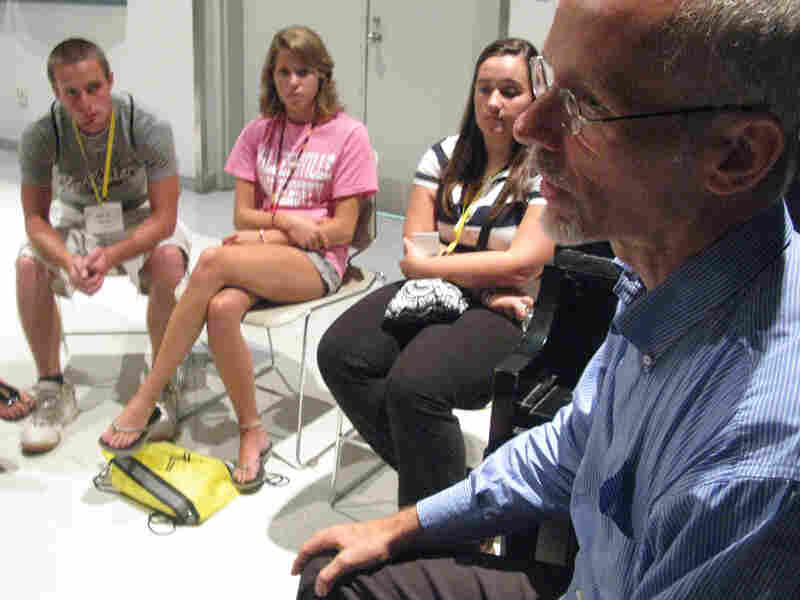 Professor Dan O'Neill talks with freshmen enrolled in his freshman seminar course on homelessness during orientation week at Millersville University near Lancaster, Pa. O'Neill, who is also an adviser, says he watches the students' study skills, how well they are managing their time, their alcohol use, sexual issues — all of the risk factors that can torpedo a student's chances of success. Larry Abramson/NPR hide caption 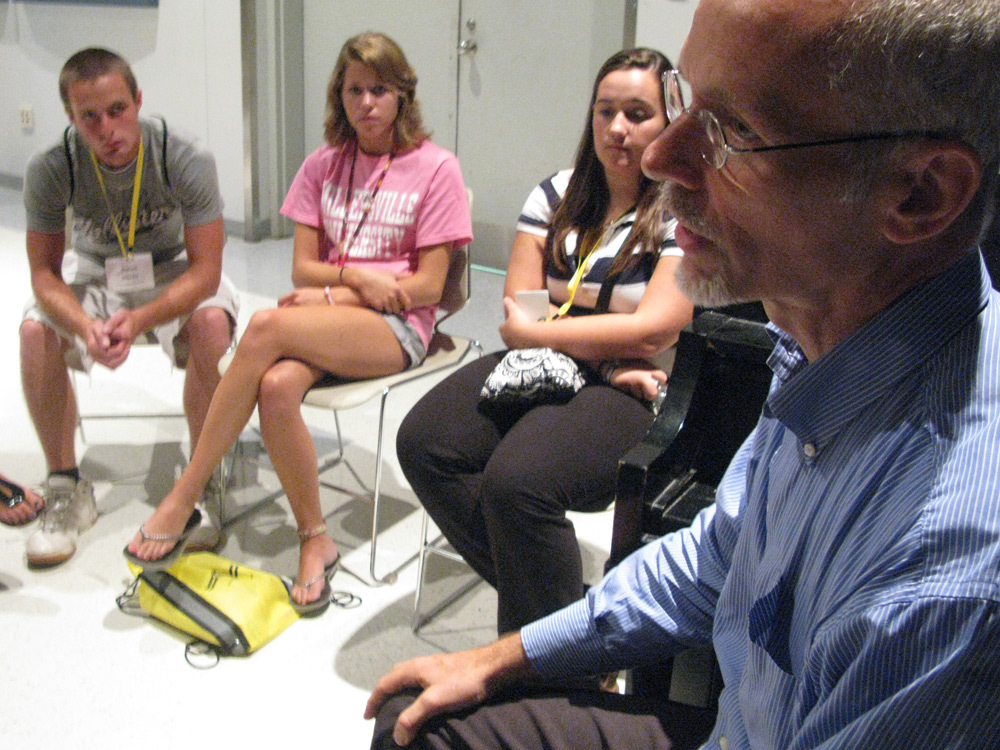 Professor Dan O'Neill talks with freshmen enrolled in his freshman seminar course on homelessness during orientation week at Millersville University near Lancaster, Pa. O'Neill, who is also an adviser, says he watches the students' study skills, how well they are managing their time, their alcohol use, sexual issues — all of the risk factors that can torpedo a student's chances of success.

Millions of college freshman are starting school this fall — and as they launch their new careers, they'll be told over and over how crucial a degree is.

Yet as many as half of all students who attend college might never complete their degrees.

Many schools view this as a crisis and have embraced a new mission: Retain students at all costs.

Professor Ralph Anttonen at Millersville University says even when he went to college, faculty were aware that many students would never finish. Anttonen, 69, says back then school administrators felt there was little they could do about this.

"It scared the hell out of me when [my professor] said, 'Look to your left, look to your right, one of you won't be here next semester,' " Anttonen says.

Now, getting students to graduate has become job No. 1 for many institutions.

Anttonen, known as "Doc," is the chief evangelist for getting students to graduate from the public institution outside Lancaster, Pa. Anttonen says retention, or holding on to students, is simple in theory.

"It's establishing a bond between that student and something in the institution," he says. "Be it a person, a program, a club, an activity."

But actually creating that bond with a bunch of teenagers is anything but simple.

One of the first activities that freshmen at Millersville experience is the freshman seminar, a key part of student orientation. Students meet for the first time with professor Dan O'Neill for a class on homelessness. Eight students slump in chairs in an auditorium. O'Neill explains the concept: They will look at what a home means in American culture — and what it means to lose your home.

The homelessness course is not graded; it's primarily meant to help integrate new students into their roles as college students and citizens of the Lancaster area. O'Neill also serves as these students' adviser. He uses the class as a way to probe strengths and weaknesses. He says he looks at their study skills, how well they are managing their time, their alcohol use, sexual issues — all of the risk factors that can torpedo a student's chances of success.

Risk factor No. 1 is being an undeclared freshman in the first place, as those are viewed as a threatened species. With no firm interest to guide them, they are more likely to be upset by the loss of a high school relationship or by bad grades in college.

Millersville President Fran McNairy says students at state schools are more likely to drift away than those chosen by selective institutions.

"It's easy to be able to retain and graduate the best and the brightest," she says.

Some Ivy League schools hand degrees to more than 90 percent of their students. But that's after they've cherry-picked those most likely to succeed. Millersville has to admit most of the students who apply. Still, thanks to its efforts at retention, this state school has a graduation rate that is much higher than similar schools.

McNairy says she is investing in retention efforts because it's the right thing to do, and because it saves money.

"When you lose a student, you have to replace a student," McNairy says. "That costs even more."

Recruiting is expensive, she says, in part because schools end up courting many students who then choose to go to another institution.

McNairy says she tries to make it everybody's mission at this school to hold on to students. That includes dorm staff, who might be the first people to notice that a student is depressed. And it includes the counseling service. Kelsey Backels, director of the counseling service, says she is already seeing the first signs of a malady that drives many students home: homesickness.

"Every day this week we've had one of our counselors on call in the office for homesick students," Backels says. "We had one yesterday who came on Tuesday and was ready to leave on Wednesday."

All this attention is not always welcome. During orientation, Millersville students are counseled, pep-talked and warned about every possible risk to their futures.

"It's boring, 'cause it is a lot of the same thing over and over again," says freshman Jessica Wall of Palmyra, Pa. "But it makes sense. It definitely will be beneficial in the long run."

Some retention programs are paying off. But the challenge continues to grow as schools accept more students with learning problems, students attending college for the first time and those heading to college from the military under the new GI Bill.