Accessibility links
Widespread Alcohol Abuse Clouds Mongolia's Future A World Health Organization report notes that alcohol abuse could be Mongolia's biggest stumbling block to economic and social progress as it drives up crime rates and creates public health concerns. Critics also say alcohol is too plentiful and the government is too reliant on revenues from alcohol sales.

At midnight in Mongolia's capital, Ulan Bator, 14 people are in the "sobering-up" cells at a district police station on a recent evening.

This and police stations like it are on the frontline of Mongolia's battle against alcohol abuse. People are brought to the cells to prevent them from freezing to death in the winter, and from doing harm to others.

A report by the U.N.'s World Health Organization notes that alcohol abuse could be Mongolia's biggest stumbling block to economic and social progress. A 2006 survey carried out by Mongolia's Ministry of Health and WHO found that 22 percent of Mongolian men and 5 percent of women are dependent on alcohol, rates three times higher than in Europe.

The station's top-ranking policeman says the level of alcohol abuse has worsened drastically since Mongolia became independent from the Soviet Union in 1990. He blames the social upheaval that came with post-Soviet economic liberalization.

Unemployment and poverty are the main issues why people get drunk. In the early '90s the manufacturing plants closed down, and their workers became very poor. With the market economy, the unemployment rate became critical and the drinking really started.

"Unemployment and poverty are the main issues why people get drunk. In the early '90s the manufacturing plants closed down, and their workers became very poor. With the market economy, the unemployment rate became critical and the drinking really started," says the officer, Davkharbayar, who like many Mongolians goes by only one name.

The sobering-up cells are in the cellar of the police station. In the empty, windowless cells, with wooden pallets on the floor, men huddle together under blankets. Their clothes have been removed to prevent them from committing suicide.

Surveys indicate that 72 percent of violent crime is driven by alcohol. Alcohol-related domestic violence prompted the arrests of the 14 people in lockup on this recent evening.

"All of these 14 calls came from homes complaining," says Davkharbayar. "It's all domestic. These men are all our regular customers. We know them all."

Rural herders have moved to the capital city with their traditional circular tents or gers. Their despair is writ large. In a district of Ulan Bator where they have settled, unconscious bodies lie by the roadside, ignored. Other drunks stumble past, held up by staggering friends. In small groups, they huddle around roadside fires, drinking themselves into oblivion.

Alcohol As A Tool

Almost one in five Mongolian men binge-drink on a weekly basis. One reason for the high level of alcoholism is the sheer availability of alcohol. Mongolia has one shop selling alcohol for every 270 people, the highest number anywhere in world. Most supermarkets have an aisle dedicated to vodka, sometimes with more than 25 types of vodka alone, costing just $2 for a half-pint.

Many politicians have a direct interest in the alcohol industry, and alcohol taxes and licenses generate large revenues for the government. 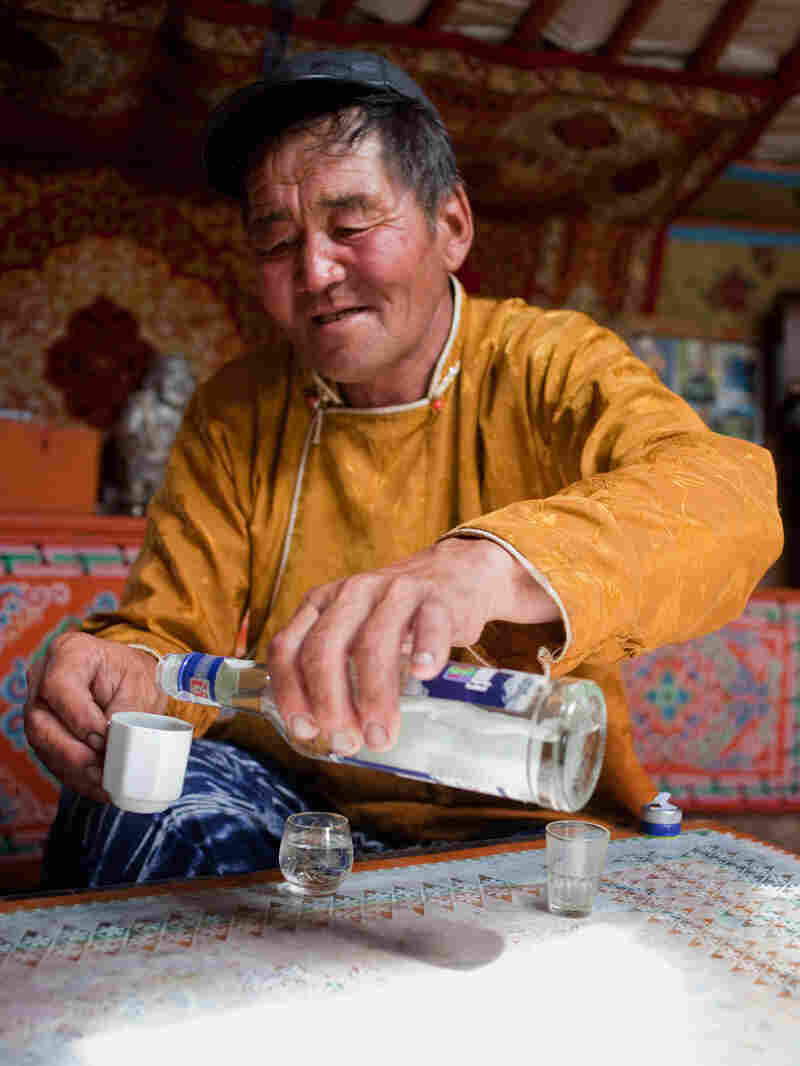 Munda, a nomad, starts his day by drinking vodka in his traditional hut, or ger, in Mongolia's Gorkhi-Terelj National Park. Ariana Lindquist for NPR hide caption 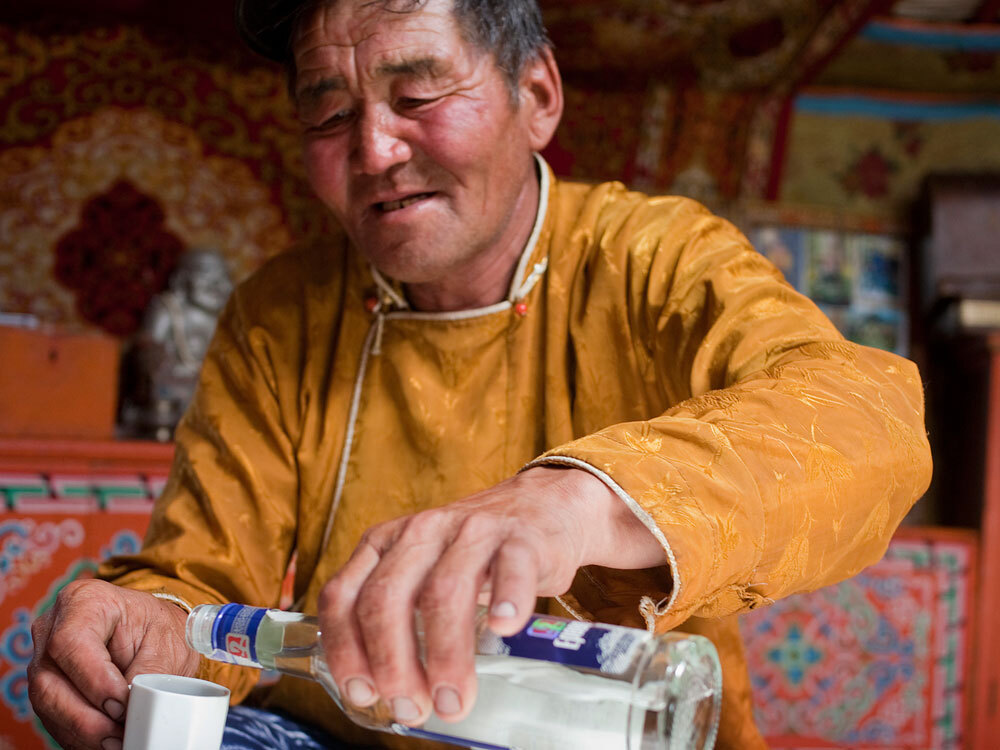 Munda, a nomad, starts his day by drinking vodka in his traditional hut, or ger, in Mongolia's Gorkhi-Terelj National Park.

"Alcohol is one of the single most important sources of income for the Mongolian government," says Sean Armstrong, who is researching alcoholism in Mongolia. "Currently, 20 to 23 percent of the government income comes from taxes directly related to alcohol use and sales."

A couple of years ago, even the then-health minister had his own highly profitable vodka brand. Many vodka brands appeal to national pride, invoking national heroes like the founder of the Mongol empire, Chinggis Khaan, known in the West as Genghis Khan.

Drinking plays a core part in Mongolian culture. But Armstrong says alcohol was also used by Mongolia's successive colonizers, first the Chinese, then the Russians.

"It has been a very important tool of colonization. At least in the 1870s, it was a key tool of the Manchus to assist in the colonization of the country and the exploitation by economic means," Armstrong says. "Most Mongolians will tell you in their opinion, the Russians were quite smart — first they brought vodka, then they brought communism, and after vodka, anything would seem like a good idea."

Alcohol is one of the single most important sources of income for the Mongolian government.

Sean Armstrong, who is researching alcoholism in Mongolia

In a shabby building on the outskirts of Ulan Bator, the state narcology center offers a place for people who want voluntarily to quit the habit. Burly security men man the doors, which are locked behind anyone entering. It is the only state-run rehab facility in Mongolia, yet it has only 50 beds for inpatients, meaning capacity is about 1,800 patients per year — far less than needed.

Patients stay for just 10 days, receiving medication for the first five and attending lectures. Some patients receive post-treatment checkups, but others don't.

In the television room, a small man who doesn't want to give his name says he is a train driver who has been in the facility for a week. He says he came because he got scared about what he might do.

"I drank too much, then I couldn't go to work. My only fear was that by being drunk I could cause deaths, since I am responsible for so many people. It was a huge problem," he says.

He admits that had it not been for this place, he would not have known where to turn for help. "I would probably have looked for an alternative method," he says, "like shamanism, and piercing the tongue and that sort of thing. People say that's not very reliable, though."

The social problems emanating from Mongolia's drinking culture are even the subject of a hip-hop parody in "Reverse Day," a sardonic song by the popular band Tatar.

All the women in the music video have their front teeth missing, a clear reference to the high level of alcohol-fueled domestic violence.

"The Earth is spinning a bit too fast," the lyrics say. "Have one more, the alcohol is evaporating."

As Mongolia struggles to find its way, this epidemic of alcoholism is undermining its progress. If left untackled, it could become a national emergency.