Accessibility links
Boeing's 'Dreamliner' Is Causing Some Headaches To build the 787, Boeing took two giant leaps. First, it created the structure not from metal, but from lightweight composite material. And second, it outsourced more than ever before. From the outset, those changes have created a lot of problems. 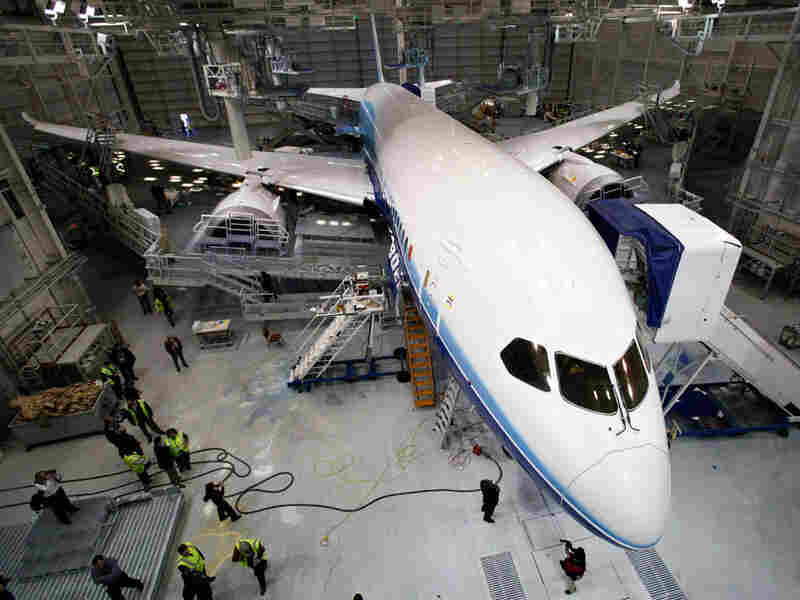 A Boeing 787 Dreamliner sits in a paint hangar at the plant in Everett, Wash. Despite fanfare over its debut, it has yet to have its first test flight. Elaine Thompson/AP hide caption 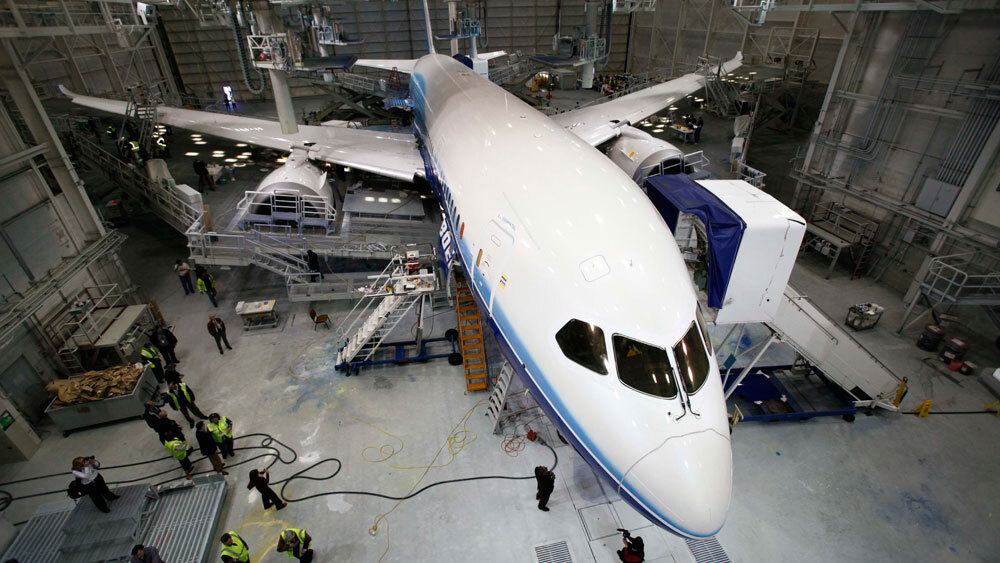 A Boeing 787 Dreamliner sits in a paint hangar at the plant in Everett, Wash. Despite fanfare over its debut, it has yet to have its first test flight.

To build the 787, Boeing took two giant leaps. First, it created the structure not from metal, but from lightweight composite material. And second, it outsourced more than ever before.

Boeing has more than 800 orders for the new jet. It remains the best-selling new aircraft in the company's history.

But Boeing's 787 Dreamliner has also produced a lot of headaches from the outset. There have been a handful of cancellations for the first test flight, which was first scheduled for nearly two and a half years ago. And this week the man in charge of Boeing's passenger jet business was replaced.

In July 2007, the company held an elaborate rollout celebration. The red carpet ceremony at the Boeing factory in Everett, Wash., was broadcast live around the world, and 15,000 onlookers cheered wildly when the plane made its debut.

But there was also some unease.

"I had a chance afterward to kind of walk, take some pictures and just look at it for a second and it didn't look quite right," says Jon Ostrower, a reporter for Flight International magazine. He says the plane didn't look flight-ready, despite assurances by senior Boeing officials a couple of weeks earlier at the Paris Air Show. 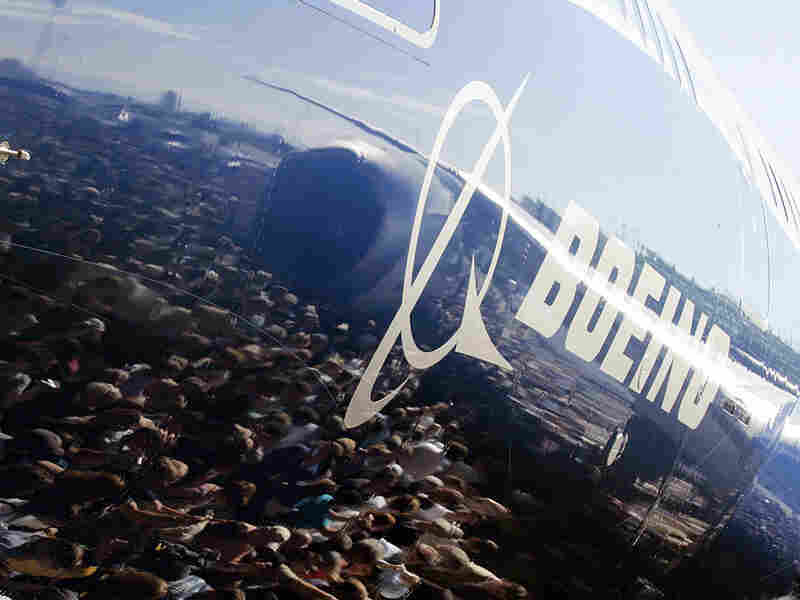 A crowd of thousands gathered in Everett in July 2007 for the debut of the Boeing 787 Dreamliner. Tangi Quemenera/AFP/Getty Images hide caption 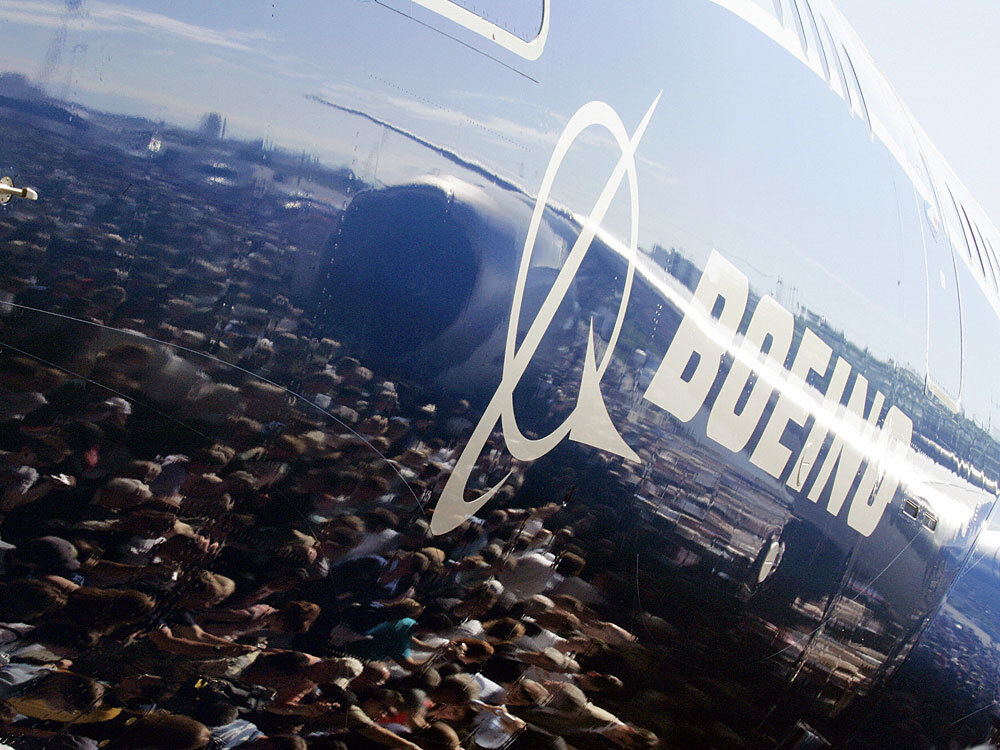 A crowd of thousands gathered in Everett in July 2007 for the debut of the Boeing 787 Dreamliner.

"The program manager actually said the plane would be structurally complete at the time of the rollout. Well, that wasn't exactly the case. That was actually far from the case," Ostrower says.

Ostrower and others wondered, did senior Boeing officials know the plane was nowhere near ready to fly, or were they totally out of the loop? Either answer is troubling. And questions about the program's leadership and the production method have persisted as the jet was delayed and delayed again.

To save money and minimize its financial risk, Boeing outsourced not just production, but design and engineering in ways it had never done before.

"Boeing had this colonial model," says Ray Goforth, executive director of the engineers' union at Boeing. "They were going to be the colonial power, and they would have these colonies, and they would tell them what they needed, and the colonies would deliver the parts and they would reap the profit. It was really this arrogant vision of how this was going to work."

The union, called the Society of Professional Engineering Employees in Aerospace, which has a vested interest in keeping jobs at Boeing, opposed the company's outsourcing plan from the beginning. But the union accurately predicted many of the problems, including suppliers with insufficient technical expertise and vast communication gaps.

This summer, Boeing had to scrub the first flight test because of structural problems. And the company ordered a major Italian supplier to stop producing fuselage sections because they weren't good enough.

Boeing declined to provide an executive to interview for this story, but the company has acknowledged that not all of its suppliers were up to the task and says it will pay more attention to them in the future.

Airline industry analyst Richard Aboulafia says Boeing's attempt to, in his words, "do things on the cheap" hasn't worked out.

"The idea of spreading risk and cost has horribly backfired," he says. "The amount of money needed to repair the damage by this production model far outweighs any cost savings associated with adopting the model."

This week, Boeing replaced the head of its passenger plane business. The new CEO of Boeing Commercial Airplanes, Jim Albaugh, comes from Boeing's defense unit. Analyst Cai von Rumohr of Cowen and Co. notes Albaugh has run technically complex programs, but not in the commercial arena.

The challenges are immense.

"Hanging over all of this is aircraft performance," says Aboulafia. "There's a lot we don't know. If there are problems, how quickly can they refine the design and manufacturing of the aircraft to meet the original expectations?"

Boeing has to demonstrate that the 787 is still worth waiting for. The first flight test is now slated for the end of the year, and Boeing has a lot riding on it.