Accessibility links
Global Financial Crisis Hits Mongolia's Grasslands The International Monetary Fund has declared the worst of the global recession over, but that's not the case in Mongolia, where the financial crisis hit later than in the U.S. And a plunge in commodity prices — especially metals and wool — is having an enormous impact.

The International Monetary Fund has declared the worst of the global recession over, but in some places the ripples of the financial crisis are still reverberating. In Mongolia, the crisis hit later than in the United States. And the global plunge in commodity prices — especially of copper, metals and wool — is still having a huge impact.

On horseback, Dalantai Khatanbaatar and his 7-year-old son canter across the windswept Mongolian plain, rounding up their animals. Like 40 percent of the country's population, Khatanbaatar is a herder.

With 250 sheep, 80 cashmere goats and 50 horses, Khatanbaatar regards himself as middling-poor. Cashmere is his main source of income, and he had depended on prices staying high, driven up by the seemingly insatiable desire for the luxury wool in the West.

But after the financial crisis hit, cashmere prices halved. Facing illness in the family, Khatanbaatar was in financial trouble. He has just taken out a $350 loan.

"I wouldn't have to ask for a loan in normal circumstances," Khatanbaatar says, sitting on a small stool inside his traditional round tent, known here as a ger. "Normally when raw cashmere sells at $28 a kilo, I can easily raise $700. But now it sells at half that. It's really affecting our everyday lives."

Normally, when raw cashmere sells at $28 a kilo, I can easily raise $700. But now it sells at half that. It's really affecting our everyday lives.

Khatanbaatar is not the only one suffering. On average, Mongolians in rural areas have taken out two loans per household, and many are struggling to pay them back.

It is perhaps a sign of the times that an American banker is a household name in Mongolia. Peter Morrow, the American CEO of one of the country's most popular banks, Khan Bank, is particularly well known in Khatanbaatar's tent, in Rashaant, 160 miles from the capital, Ulan Bator.

"Do you know Peter from Khan Bank?" Khatanbaatar anxiously asks a visiting reporter. "I borrowed money from Peter — if you meet him again tell him I'm thankful."

Morrow says his bank is doing all it can to help herders pay back their loans. But many are unable to do so now.

"Our policy has been to restructure every loan we possibly can. And we're doing a lot of restructuring," Morrow says.

He says that in the first six months of the year, Khan Bank restructured 12,000 loans, which is about 23 percent of its loans to herders.

Subprime herder loans are only a small portion of the bad debts held by Mongolia's banks. Eighteen percent of all loans are non-performing or "bad" debts, according to the World Bank.

It's likely the worst is still ahead, largely because Mongolia has a seasonal economy, so the summer feels good, everybody's out, and the animals will be fed and sold, cash is coming in. But as soon as winter starts hitting, that's when you'll see the full brunt of the crisis.

In Ulan Bator, the impact is clear. Construction projects are stalled; day wages for laborers are down by 60 percent. Government revenues slumped, because of the collapse in mineral prices, leaving a budget deficit of more than $200 million over 18 months, equivalent to 12 percent of Mongolia's gross domestic product.

Some help has come from international lending institutions. But Arshad Sayed, the World Bank's representative in Mongolia, is gloomy.

"It's likely the worst is still ahead, largely because Mongolia has a seasonal economy. So the summer feels good, everybody's out, and the animals will be fed and sold, cash is coming in. But as soon as winter starts hitting, that's when you'll see the full brunt of the crisis," Sayed says.

The International Monetary Fund also says the chances of a near-term recovery in Mongolia are weaker than previously foreseen. But Morrow says Mongolia is in a unique position.

"Mongolia is perhaps the only country in the world that has a fix for its economic problems — an immediate, available fix — in the form of very large mining projects," he says.

One project, the Oyu Tolgoi copper and gold mine, would bring investment roughly equivalent to the country's entire economy. But the deal has been tied up in Mongolia's parliament for the better part of a decade. But parliament recently struck down a controversial windfall profits tax on mining, which paves the way for global mining giant Rio Tinto and Canada's Ivanhoe Mines to proceed with the project. 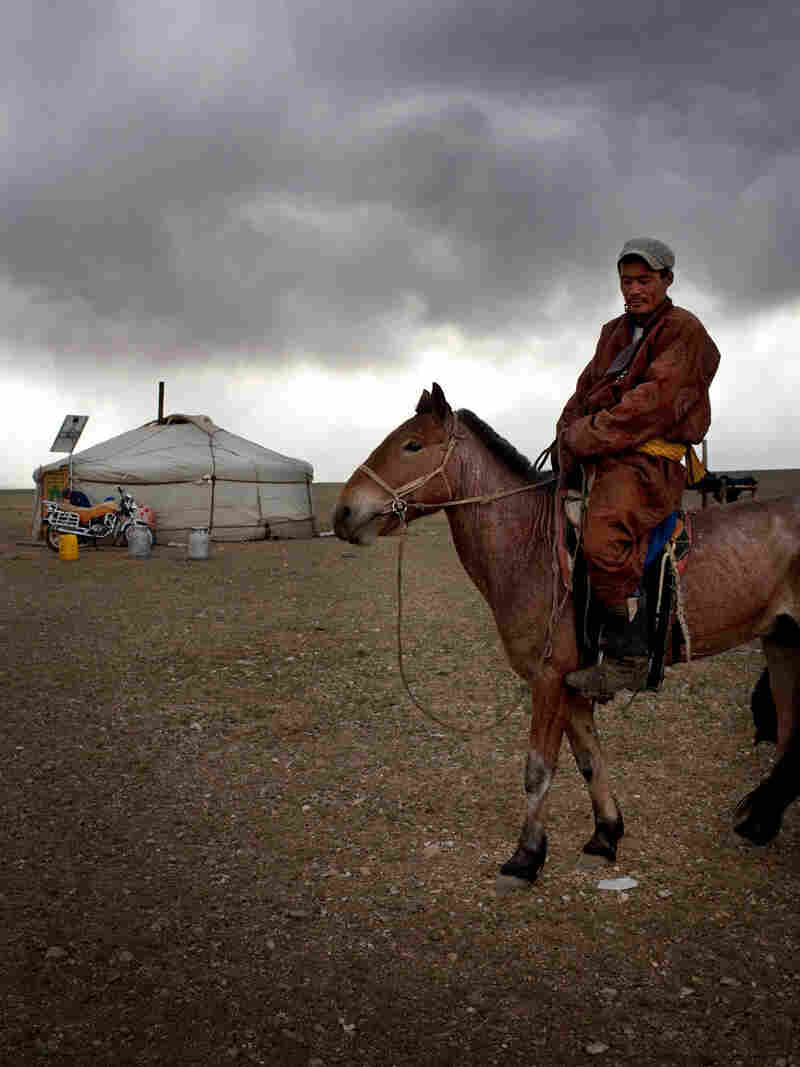 Munkhbat Altangerel is seen at his ger, the traditional felt tent mobile home of nomadic Mongolians, on the grassland in Uyanga, Mongolia. Ariana Lindquist for NPR hide caption 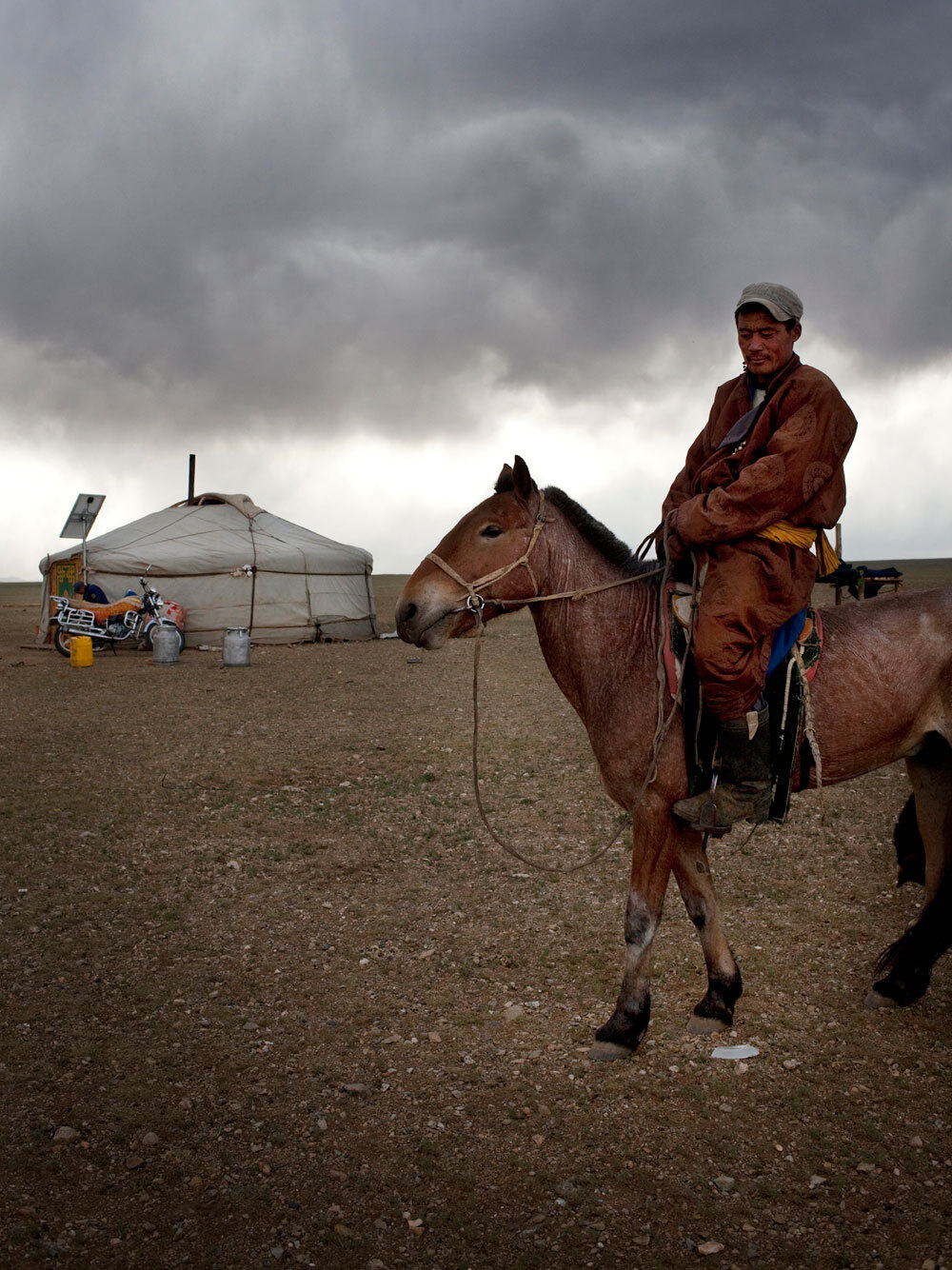 Munkhbat Altangerel is seen at his ger, the traditional felt tent mobile home of nomadic Mongolians, on the grassland in Uyanga, Mongolia.

On the vast Mongolian grasslands, far away from talk of mineral deals, the crisis has already hit Munkhbat Dashtseren. Watching his wife ladling hot milk, he is worrying about the present.

Lured by low interest rates, the 59-year-old took out a $700 bank loan to buy a motorcycle and a new ger for his son. But then the financial crisis hit, and interest rates — and his repayments — went up. Meanwhile, commodity prices plummeted, and food prices rocketed, leaving his family of six struggling.

"Tomorrow I have to go to pay money to the bank. I've had to sell 20 sheep to do this. It affects me a huge amount. Before I used to buy lots of bags of flour and rice to stockpile over there. Now you see it's empty," he says.

Dashtseren says he can no longer find any way to cut his family's expenditures.

"We cannot eat any less," he says wearily. "We don't eat too much anyway."

As his family milks its diminishing herd of sheep in a blisteringly cold wind, Dashtseren is yet another victim of easy credit. He now thinks the bank cheated him, remembering the visits to his ger by bank officials offering loans at unbelievably low interest rates.

In Mongolia, as in the U.S., many of those affected are the worst off, who didn't or couldn't read the fine print. Dashtseren has calculated that his family can survive for another year or so, but will have to keep selling off its flock to service the loan.

At this rate, he says, they will end up with no sheep — and no source of income for the future.