Accessibility links
Hospitals Work To Prevent Patients From Falling The No. 1 reason for patient injuries at hospitals is falling. Medicare no longer covers the costs related to some falls and many hospitals are making changes to help prevent them. But one critic worries that such precautions could potentially go too far.

About a year ago, something tragic happened at Fairview Hospital in western Massachusetts.

"All of a sudden, out of nowhere, we heard a humongous thud," says nurse Ellen Beckwith, who was working on that floor. "Not only did we hear it, but we felt it throughout the whole unit." 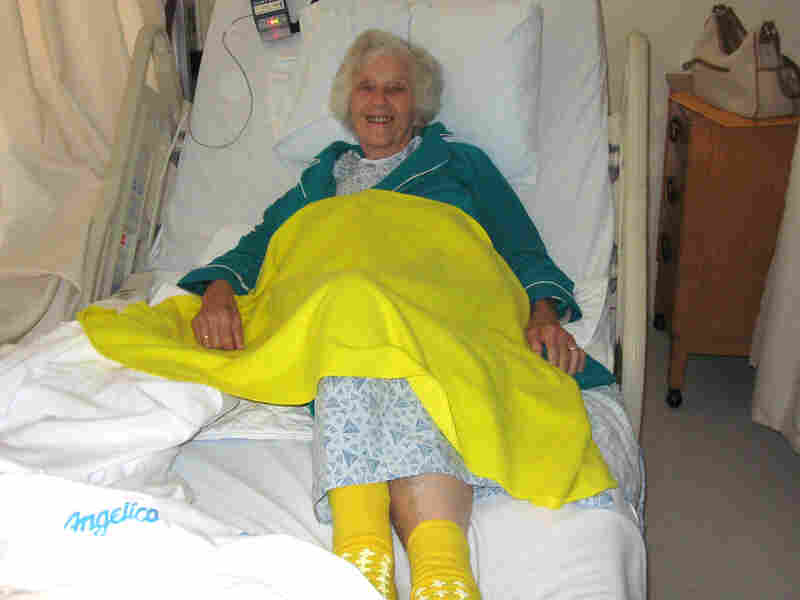 Jean Gutowski, 88, a patient at Fairview Hospital in Great Barrington, Mass., wears yellow socks and covers herself in a yellow blanket, which indicate that she's at high risk of falling. Sacha Pfeiffer/WBUR hide caption 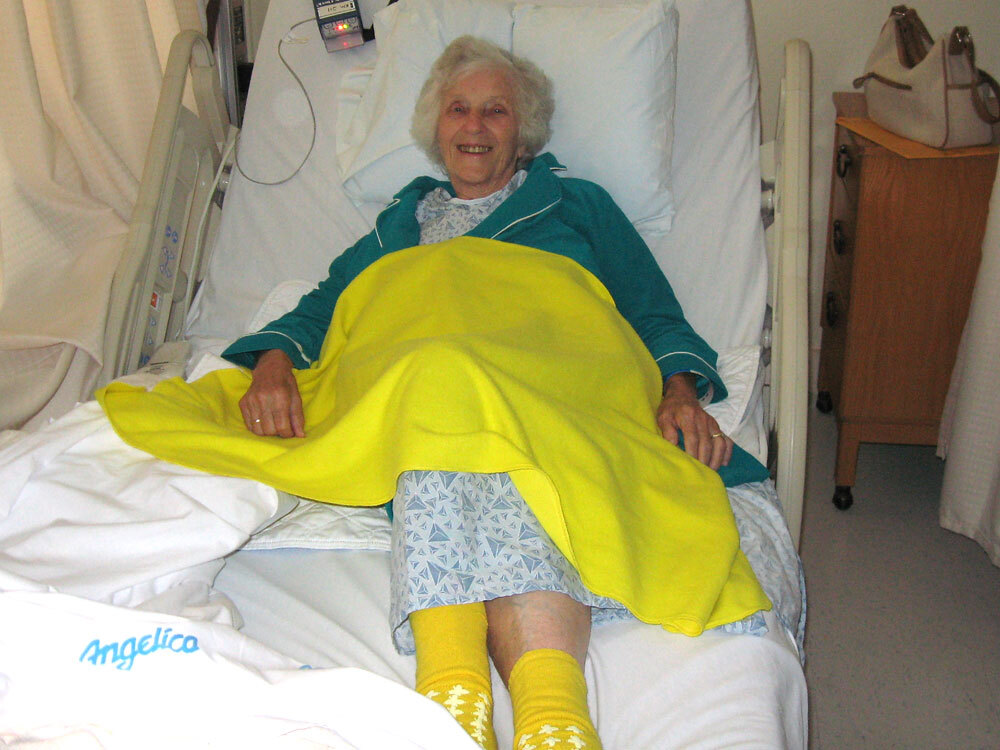 Jean Gutowski, 88, a patient at Fairview Hospital in Great Barrington, Mass., wears yellow socks and covers herself in a yellow blanket, which indicate that she's at high risk of falling.

A patient had fallen. She was 90 years old.

She had hit the back of her head on the metal sill of a closet. The woman got up and, at first, she seemed fine. She was awake and talking, and complained only of a sore back. A half-hour later, that changed.

"All of a sudden, she went unresponsive and vomited, and she was never responsive after that," Beckwith says. "She died not long into the early morning hours." 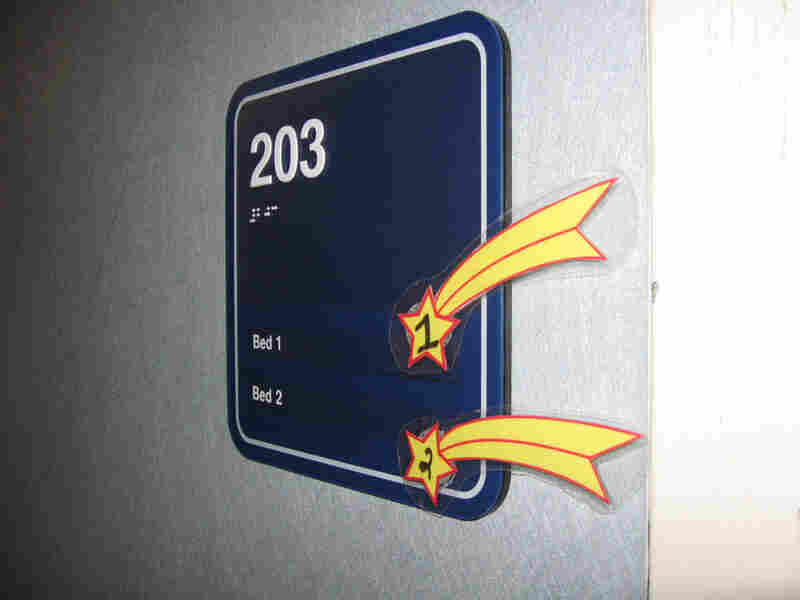 Yellow stars outside rooms at Fairview indicate which patients are at risk of falling. Sacha Pfeiffer/WBUR hide caption 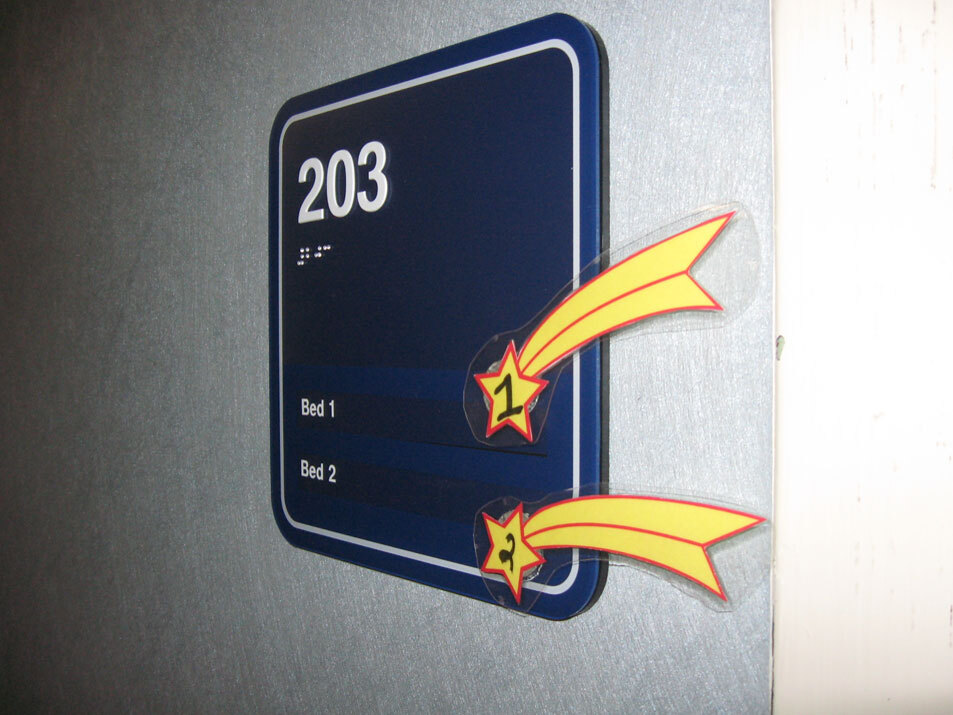 Yellow stars outside rooms at Fairview indicate which patients are at risk of falling.

The cause of death was a traumatic brain injury from the fall. The accident was devastating for Fairview's staff, so the hospital decided that though it already had a fall-prevention program, it needed to be more aggressive.

Beckwith points to one way the hospital now identifies patients at risk of falling: Outside of several rooms are big stars made of bright-yellow construction paper.

"You can look in and see on the closet there's a yellow sheet," she says. "That individual is somebody that's a high, high fall risk." Nurses make rounds to check up on those patients every half-hour, instead of every hour, Beckwith says.

All patients admitted to Fairview are evaluated for their risk of falling, which is the number one reason for patient injuries at hospitals. They are then re-evaluated daily. High-risk patients also get yellow blankets and yellow socks. They also get bed alarms. If a patient at risk of falling tries to get out of bed unattended, a blaring tune sends nurses running to help.

"When you start getting up, your feet aren't where they should be," Schermerhorn says. "You really could feel that all the oars weren't in the water. You're dopey, for lack of a better word."

Patient falls are the most common injuries reported in hospitals. Many hospitals are making simple changes. For example, patients aren't given diuretics before bedtime, as a full bladder might tempt patients to make a nighttime bathroom trip by themselves — a classic scenario for a fall.

Some hospitals avoid drugs that could impair a patient's balance. They are also using beds that can be lowered to the floor so that if patients fall out, they won't fall far.

All this patient protection isn't just happening out of benevolence. In some states, hospitals now have to publicly report their fall rates. There is also a financial incentive: Medicare will no longer pay for costs related to certain hospital falls. Those falls can add more than $4,000 in excess charges per hospitalization.

Sharon Inouye, a Harvard Medical School professor, says she worries fall-prevention efforts could have a dark side.

"My concern is that in the desire to prevent falls from occurring, hospital staff may want to do things like put up more restraining devices or not let people get up out of bed," she says.

When a person is confined to bed, she says, "they lose muscle mass, they start to get weak, they lose their balance ability — and that, of course, predisposes [them] to falls."

Many hospitals say they restrain patients only as a last resort. They say that other techniques are helping reduce falls. Now that hospitals' reputations and financial health are on the line, there is strong incentive to keep driving those fall rates down.