Accessibility links
Can Dirt Really Save Us From Global Warming? Some politicians are promoting "no-till farming" as a way to fight climate change. The idea? When crops are planted without tilling, the soil holds carbon that would otherwise end up in the atmosphere. But some scientists think no-till may not be better at storing carbon than conventional farming. 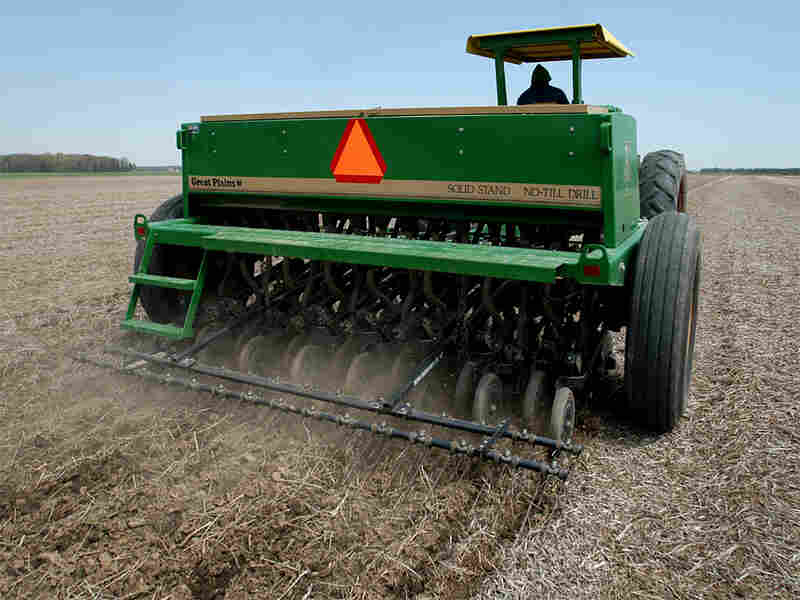 A farmer plants soybeans in an untilled field. No-till farming, in which crops are planted into last year's field stubble without plowing, has gained acceptance in the past two decades as a way to build organic matter, reduce erosion and control pesticides and fertilizers. J.D. Pooley/AP hide caption 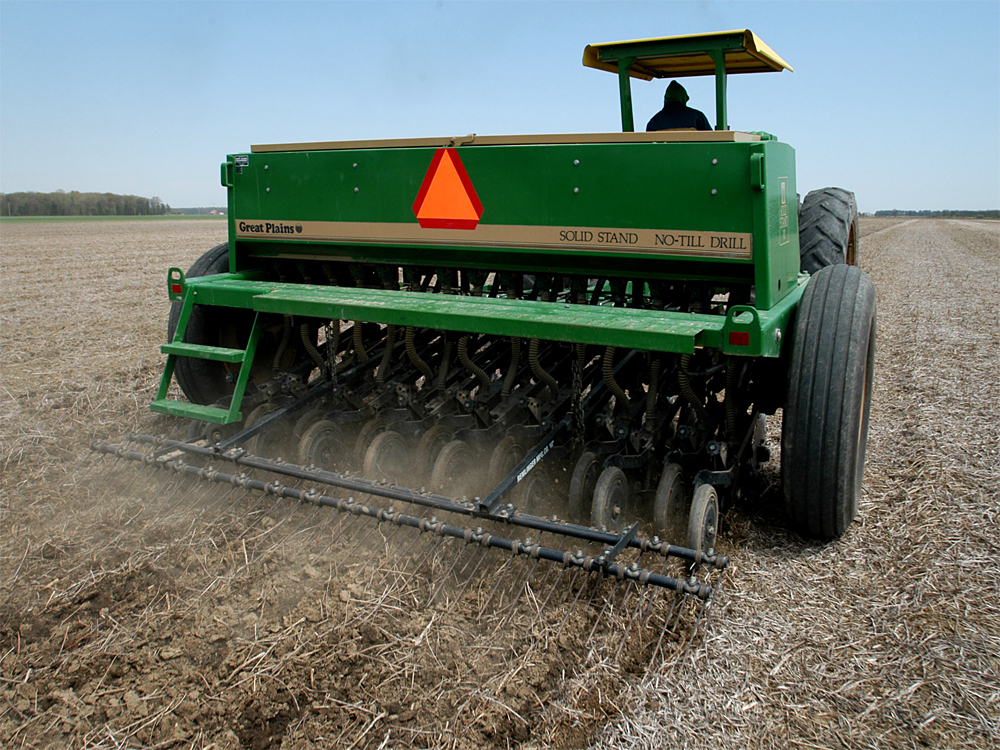 A farmer plants soybeans in an untilled field. No-till farming, in which crops are planted into last year's field stubble without plowing, has gained acceptance in the past two decades as a way to build organic matter, reduce erosion and control pesticides and fertilizers.

This month the Senate is set to take up the climate and energy bill that Congress began work on last spring. One provision will likely set up a system to pay farmers for something called "no-till farming."

The concept: When crops are planted without tilling, the soil holds more carbon, which means less goes up into the atmosphere.

But scientists aren't sure no-till really sequesters carbon any better than conventional farming.

Soil scientist Michel Cavigelli of the U.S. Department of Agriculture agrees that no-till fields, like the one he studies in rural Maryland, can hold more carbon than plowed fields.

In part that's because the Maryland field has more organic matter — dead vegetation (mostly the residue from the previous crop), microorganisms, manure or compost.

"The percentage of organic matter in this soil is two percent," Cavigelli says of a no-till field of corn, "twice as much in some of the tilled systems, at the very surface."

But that is only at the surface. Researchers have discovered that when you dig down three feet or so, plowed fields hold just as much — if not more — carbon than no-till.

This is important because the energy bill would allow farmers to earn "offsets" if they practice no-till.

Offsets are like "get out of jail free" cards in Monopoly. If you do something that reduces carbon in the atmosphere, you earn an offset that you can sell to a company that would have to limit its carbon emissions if the bill becomes law. Each offset a company buys allows that company to emit more carbon at its own facilities.

But no-till only stores carbon as long as it isn't tilled. "If you till it, you can lose almost all the carbon you gained in the previous five years say with one tillage, even," says Cavigelli. "So one of the challenges is to maintain your no-till fields forever in essence to really gain the benefits of carbon sequestration."

Rattan Lal, a soil scientist at Ohio State University, says that's not what a lot of American farmers do. "The farmer plows one year and does no-till the next year."

But if it isn't tilled, Lal says, the no-till field can store more carbon than a plowed field if the conditions are just right — the right kind of soil, moisture, and soil temperature, for example.

The Question Of Residue

There's a possible conflict brewing here, though. Federal law and the energy bill encourage farmers to remove crop residue — the remains of the previous season's crop — to make ethanol.

"That's a no-no," Lal says. "The moment you take the crop residue away the benefit of no-till farming on erosion control, water conservation and on carbon sequestration will not be realized."

Nonetheless, Lal supports no-till for carbon offsets, mostly because when you don't plow, you use less fossil fuel to run equipment and make fertilizer.

These savings mean that no-till has a smaller "carbon footprint" than plowing.

Farm interests are eager to win offsets. They say the energy bill will raise their fuel costs across the board. The final list of what will be allowed in the bill could help swing votes when the Senate votes on the measure.