Accessibility links
Illustrator Keeps Artistic Vision Despite Eye Injury After nearly four decades of illustrating plants for the Smithsonian National Museum of Natural History, Alice Tangerini is still trying to perfect the art. But an eye injury has made her job more difficult, so she's had to make accommodations such as wearing an eye patch to allow her to focus better and using a computer to draw.

Alice Tangerini got her job illustrating plants for the Smithsonian National Museum of Natural History straight out of college in 1972. Her boss, botanist Warren Wagner, thinks she's now the best botanical illustrator in the U.S. — even with just one good eye.

Wagner has asked the slender, dark-haired artist not to retire, calling her "irreplaceable." She says she absolutely loves her job: Hours can go by, she says, as she draws the long, smooth lines that capture the nature of a leaf or a branch. After nearly four decades on the job, Tangerini is still trying to get it just right.

"Every drawing is that attempt to reach perfection," says Tangerini, who is also the curator of the Smithsonian's 5 million plant drawings. "The attempt to really make that one line that you say, 'That's exactly the way I wanted to make that line.'" 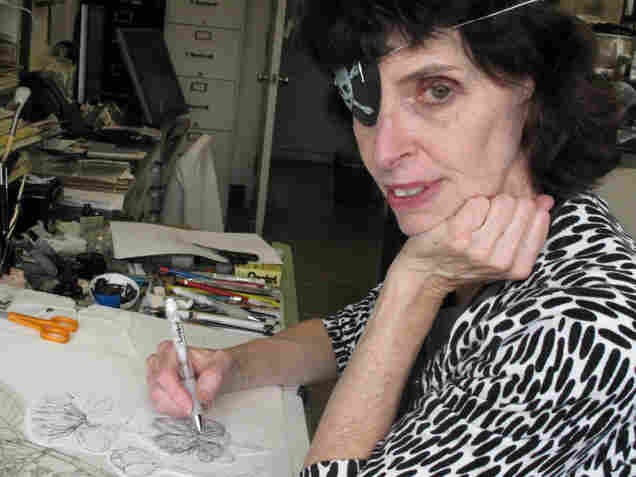 Botanical illustrator Alice Tangerini's right eye was injured, so she wears an eye patch to help her focus with the left. Ted Robbins/NPR hide caption 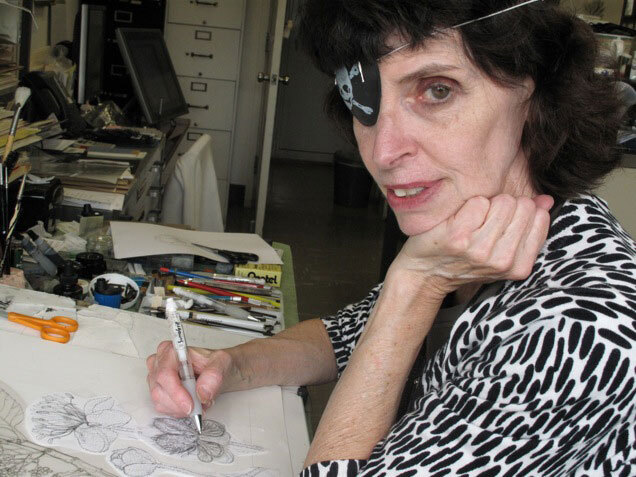 Botanical illustrator Alice Tangerini's right eye was injured, so she wears an eye patch to help her focus with the left.

Tangerini's work appears in scientific journals such as The Flora of the Guianas. She is as much scientist as artist. Her office several floors above the museum's exhibits is filled with old pens, fine brushes, even surgical tools she uses to dissect tiny plants such as the grain-sized flowers of the sandpaper tree from Guyana. She works from dried brown specimens collected in the 1990s and sewn to a large piece of acid-free paper. She must rehydrate the flowers, then look at them under a microscope. Then she makes sketches of the hairs on the magnified flower.

A New Way Of Looking At Things

But it's getting tougher for Tangerini to see things. Her right eye was injured four and a half years ago.

"They don't have a diagnosis for it, they just say it's bad luck. You just worked so many years and one eye gave out," she says. "And in this field, you can't have any distortion. You can't put up with it."

Tangerini had surgery, but it left her with double-vision in her right eye. So she faced a potentially career-ending obstacle. Her boss tried to help. Wagner suggested she use only her good eye and wear an eye patch over her injured eye.

"I gave her my son's pirate patch," he says, "so she can cover one eye and she still focus in and see things. So she's figured out ways to go past her disability with her eye and still do first-rate art."

That's not the only accommodation Tangerini had to make to stay on top of her game in a field that demands detail, skill and patience. She recently began using a large graphics tablet, a monitor she can draw directly on. The software program Photoshop makes the small drawings larger. It's especially useful for techniques like stippling — using dots to create a shadow effect.

"It's a little bit of an eye relief for me to be able to enlarge the drawings on a monitor to where I don't have to really strain my eye," she says.

It works. But wearing an eye patch and using only one eye for as much as 10 hours a day is tiring. So, little by little, Tangerini is being forced to go digital. She doesn't mind if it will keep her on the job.

"As long as my eyes hold out," she laughs. "As long as I can still use my good eye I will still be drawing here."