Accessibility links
Fall Movie Preview - Bob Mondello - Wild Things, Sweet Nothings And A Pair Of Nines The summer blockbuster season is wrapping up, which means it's time for a cooler (and cooler-headed) stretch of quieter films. Autumn will bring relationship dramas, musicals, swooning romances and — OK, fine — a couple of films about the end of the world. Bob Mondello has a preview. 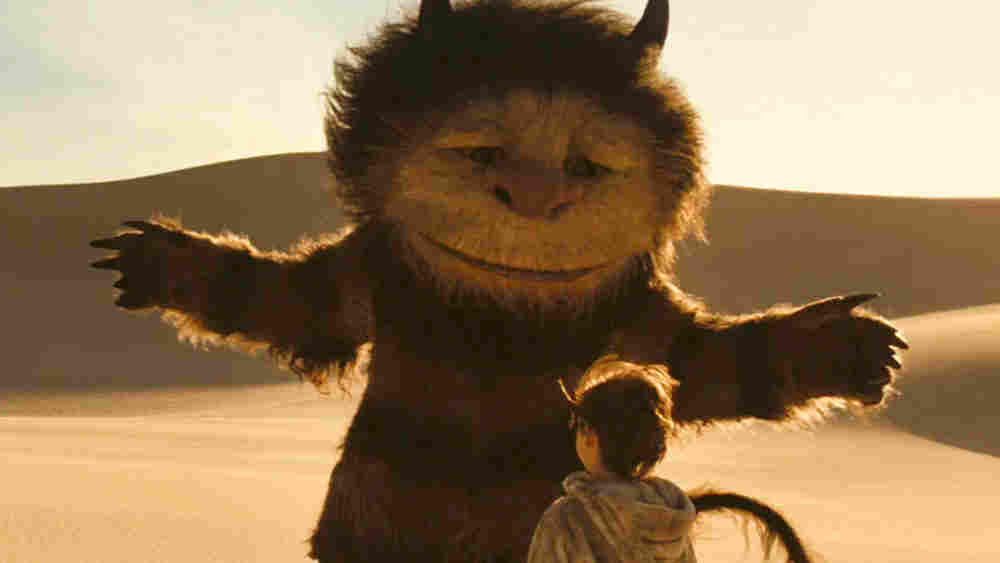 Don't blink: James Gandolfini as Carol and Max Records as Max in Where The Wild Things Are. Warner Bros. Pictures hide caption

'Where The Wild Things Are'

The season of summer blockbusters draws to a close this weekend, having raked in some $4 billion at the box office — while leaving audiences transformered, upped, hangovered, (star) trekked, and (Harry) pottered.

Traditionally, cooler weather brings quieter films and Oscar hopefuls, and this fall is no exception. Quiet time at the cinema will include 19th-century poetry, dramas about relationships, and in the movie 2012 — well, that one's not so quiet, come to think of it — the end of the world as we know it.

The calendar of the ancient Mayans ends three years from now, you see, and that's enough for the folks who blew up world capitals in Independence Day and froze most of the civilized world in The Day After Tomorrow. In 2012 they'll be bringing plagues of meteors to the party, so be prepared to duck.

Also battling apocalypses: Bruce Willis in Surrogates, in which the world is mostly peopled by robots, Viggo Mortensen in The Road, in which the world is barely peopled at all; and Elijah Wood in the Tim Burton/Timur Bekmambetov-backed adventure 9, an animated nightmare in which mankind has given up the ghost entirely — although a few, um, surrogates are still around. 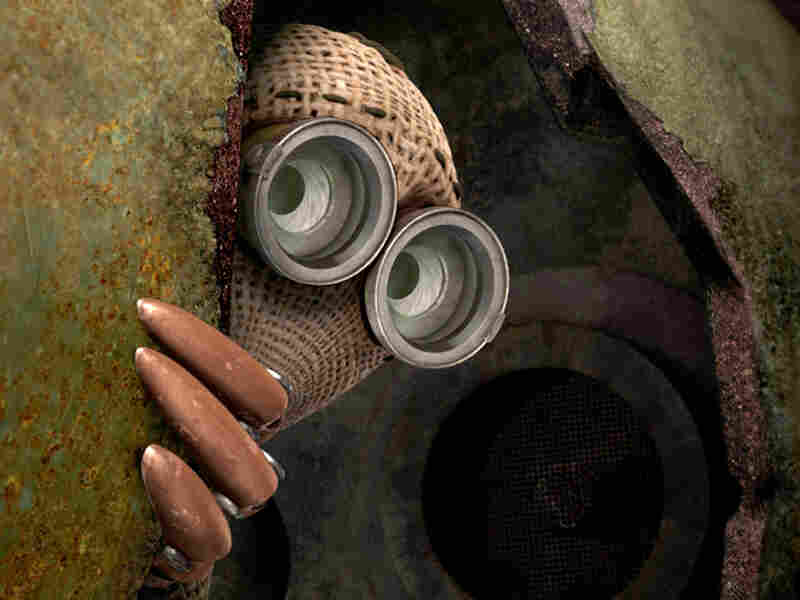 Short-order star: Shane Acker's 2005 animated short made a smallish sensation out of No. 9 — a rag-doll creature brought to life by one of Earth's last mad scientists. Now 9 (voiced by Elijah Wood) gets a somewhat more epic adventure in Acker's feature-length adaptation. Focus Features hide caption 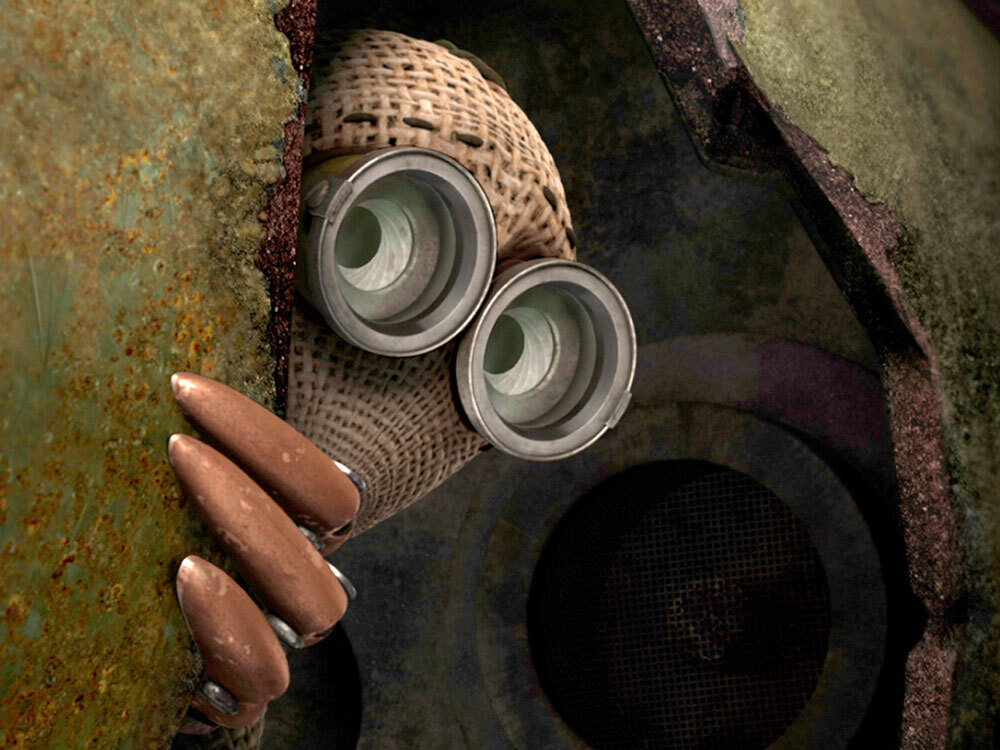 Short-order star: Shane Acker's 2005 animated short made a smallish sensation out of No. 9 — a rag-doll creature brought to life by one of Earth's last mad scientists. Now 9 (voiced by Elijah Wood) gets a somewhat more epic adventure in Acker's feature-length adaptation.

The rest of Hollywood will be hewing a little closer to real life, but there's still suspense to be had in, say, Mira Nair's biographical film Amelia, based on the life of aviator Amelia Earhart. Star Hilary Swank looks so much like the real deal that the director was able to interweave actual newsreel footage in the film.

Biopics without that luxury include Coco Before Chanel, in which Audrey Tautou plays the famous designer; The Young Victoria, with Emily Blunt as a barely teenaged Queen of England; and The Informant!, in which Matt Damon plays corporate whistleblower Mark Whitacre. Whitacre was a high-paid (and bipolar) executive at the agricultural firm Archer Daniels Midland when he decided he was uncomfortable with how the company operated. In the film, he's depicted as a guy so eager to be helpful to the FBI that his enthusiasm kinda gets in the way of his going undercover. 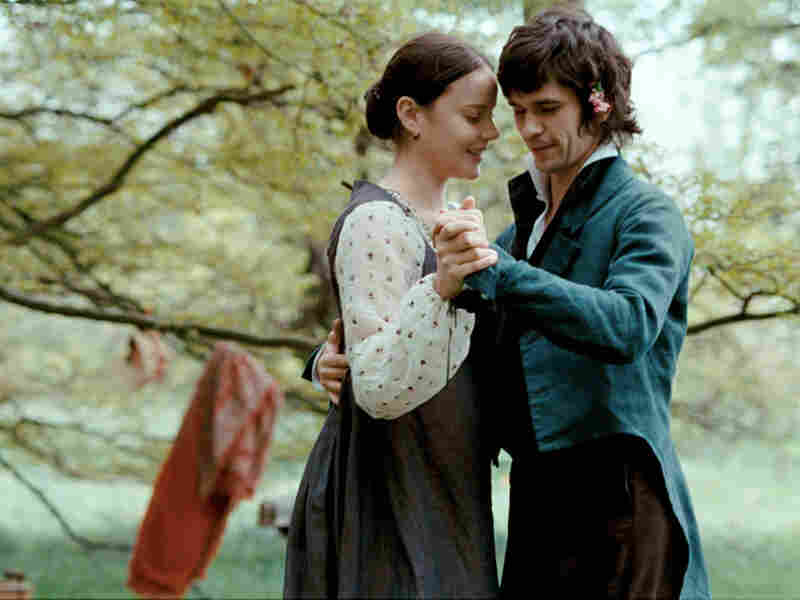 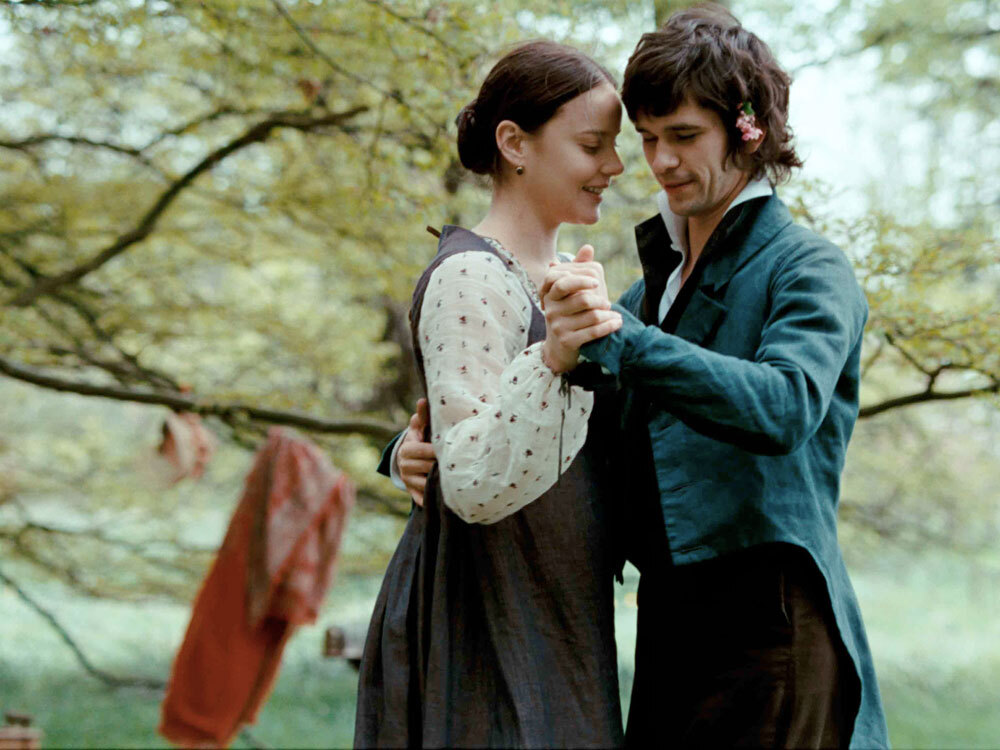 'The sorryest figure in the world': That's what John Keats (Ben Whishaw) thinks a lovestruck man looks like. Guess who falls for Fanny Brawne (Abbie Cornish)?

If your taste in biography runs to something a bit more Masterpiece Theaterish, there's also the story of a short-lived 19th-century poet. John Keats is pictured in Bright Star as a certifiably incurable incurable romantic; director Jane Campion and her producers presumably hope their doomed hero was right, and that "a thing of beauty is a joy for ..." — well, for at least a few weeks at the multiplex.

For longer-lasting romance, teenage girls have the latest in The Twilight Saga: New Moon, about a high school student and the vampire she loves. Other teen romances include the film An Education, in which a 16-year-old schoolgirl is wooed by an older man, and Jennifer's Body, in which Juno screenwriter Diablo Cody posits a high-school student who seduces — and then eats — her boyfriends. 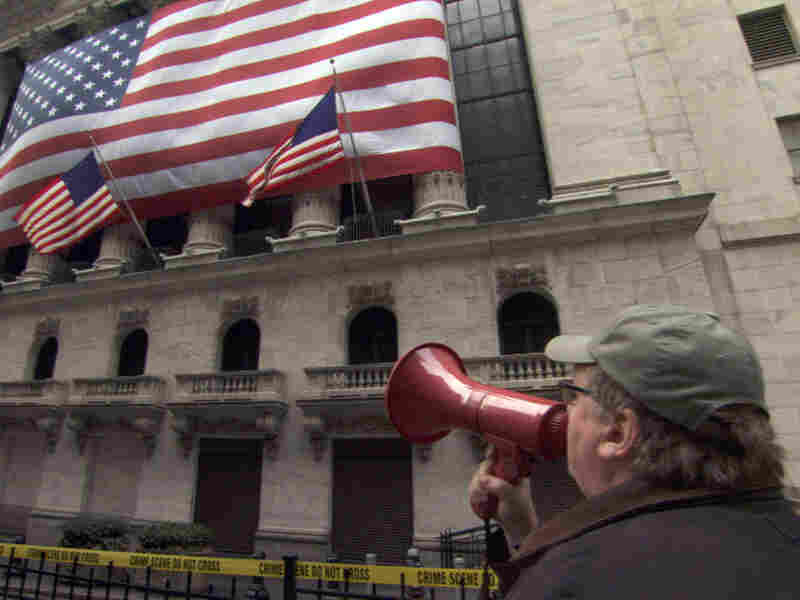 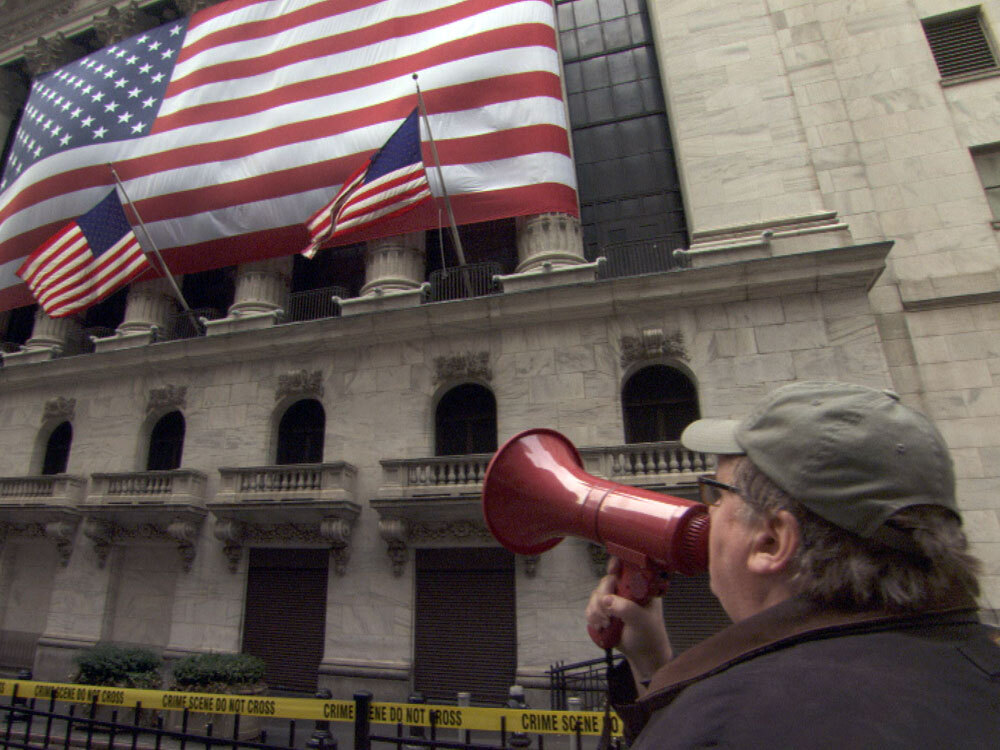 If that's not your idea of romance, there's a documentary called A Love Story. Well, sort of: Michael Moore's new provocation is actually called Capitalism: A Love Story, and it deals with the banking-system collapse that led to the current economic crisis.

Other documentaries include No Impact Man (which just opened in a couple of markets) More Than A Game, about the Ohio high school team Lebron James played on before he became an NBA superstar, and This Is It, a concert movie using rehearsal footage shot just before Michael Jackson's death, as the pop star was preparing for a comeback tour.

Looking for a piece of that same music-movie audience will be a remake — of Fame, this time with a hip-hop inflection and up-to-date dance moves for the kids of the generation that saw the first one in high school.

For even younger kids, there's an "origins" story for a beloved children's novel. If you know about the town of Chewandswallow, you know that weather forecasts there often say things like "Cloudy With a Chance of Meatballs." The film of the same title will explain how that came to pass.

Other kidflicks include Disney's first animated African-American princess in The Princess and the Frog; a stop-action animated version of Roald Dahl's Fantastic Mr. Fox, voiced by the likes of George Clooney and Meryl Streep and directed by Wes (The Royal Tenenbaums) Anderson, of all people.

Another director who usually specializes in quirky pictures for adults — Spike (Being John Malkovich) Jonze — has corralled some fierce-looking creatures for a live-action version of a beloved tale that Maurice Sendak told in vivid pictures and just 10 sentences. It's about a boy named Max, and the imagination that takes him Where the Wild Things Are. 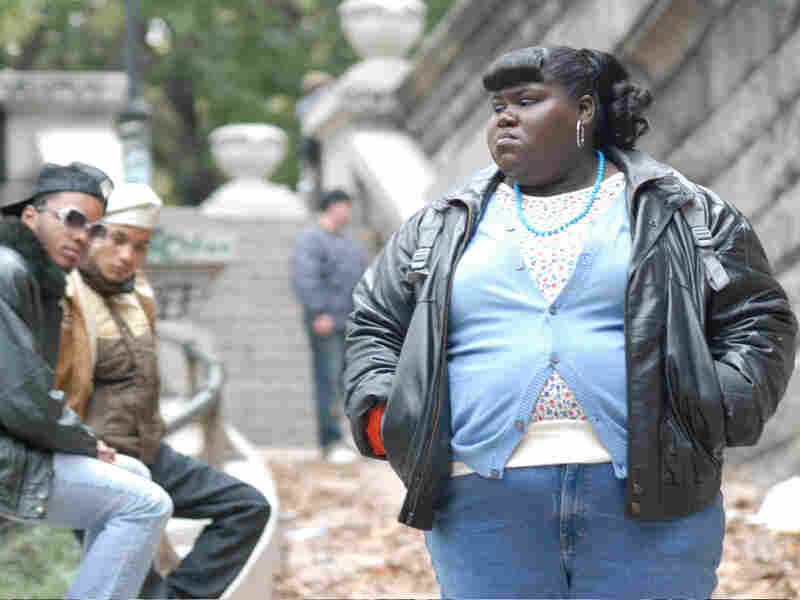 Precious child: Gabourey Sidibe stars as Claireece "Precious" Jones in one of the season's most anticipated indie dramas. It's based on a harrowing novel by the writer and performance poet Sapphire. Anne Marie Fox/Lionsgate hide caption 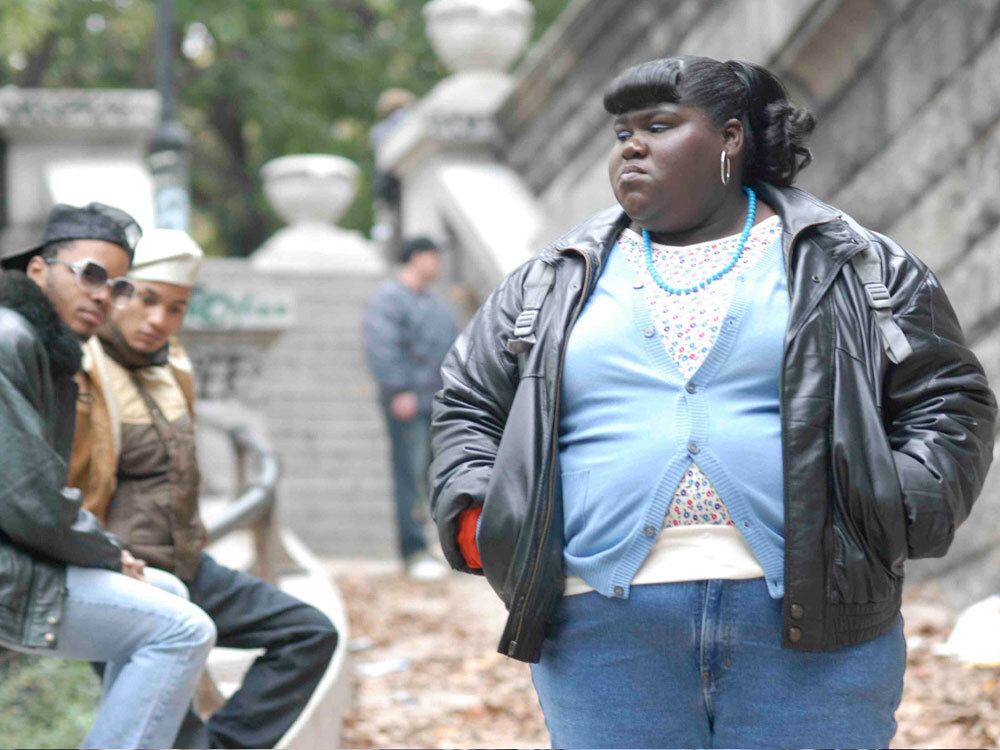 Precious child: Gabourey Sidibe stars as Claireece "Precious" Jones in one of the season's most anticipated indie dramas. It's based on a harrowing novel by the writer and performance poet Sapphire.

Fantasy is what Hollywood regularly serves up. Realism is rarer — the province mostly of low-budget independent films. The most heralded one that will come your way this autumn is the Sundance hit Precious, based on a novel about an overweight teenager who has big dreams and a big body, but very little else in life.

Precious leads a fall parade of films with serious themes. Others include The Boys Are Back, with Clive Owens as a struggling widower with two sons, and Brief Interviews with Hideous Men, a labor of love for actor John Krazinski, who was so enamored of the short-story collection by the late David Foster Wallace that he turned them into a screenplay, and stepped behind the cameras to direct it.

More experienced directors who've waited for cooler weather to unveil their pictures include the Coen Brothers, who have a quirky comedy called A Serious Man, and Pedro Almodovar, who arrives in the middle of Oscar season with the film noir Broken Embraces, starring current muse Penelope Cruz.

But the film that has the buzz for Oscar season is Nine. No, not 9 — this is Nine. Rob Marshall, the guy who won every award going for his musical film Chicago, is back directing another Broadway-to-film musical.

This one's based on Federico Fellini's 8 1/2, about a director who's stuck for inspiration. Arthur Kopit and Mary Yeston added songs to make a stage hit called Nine, which is the number of women in his life who end up inspiring him. They include such Oscar winners as Judi Dench, Nicole Kidman, Penelope Cruz and — perhaps because one of the big production numbers is called "Be Italian" — Sophia Loren.

As Loren makes an entrance in the film's trailer, the music swells to become a fanfare, and the singer and everyone else turns her way as if a goddess has arrived. Which makes sense, for of course one has.