Accessibility links
Outlandish Advice with a Spacey Rock Vibe On "Rocket," Working for a Nuclear Free City attempts to solve some of life's most vexing problems. But as the answers get more outrageous, and the lessons get harder to come by, the music's momentum starts to take over. 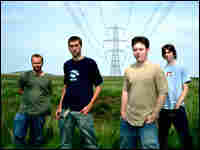 Working for a Nuclear Free City attempts to solve some of life's most vexing problems. hide caption

Songs are always there to provide counsel during hard times, a soundtrack for love gained and lost, and an escape hatch when escape is most desperately needed. Sometimes, they're even there to answer life's most haunting questions. Why songwriters are expected to reveal these secrets is beside the point; theirs are often words to live by.

On "Rocket," Working for a Nuclear Free City makes it easy. "If you're unclean, better bleach your body" — check. A bath might well work wonders. "If you feel the hate, better kill somebody' — uh, check? "If you're feeling ill, better leave your body" — easier said than done. "If you wanna leave, better build a rocket." Okay, so Working for a Nuclear Free City doesn't have the answers, but there's probably a lesson in there somewhere. Regardless, "Rocket" is built around a spacey rock vibe that builds momentum as its advice gets more outlandish. Listen, but don't act.