Accessibility links
Climate Game Gives Real Options to Save World A game developed by Princeton University professors gives students and executives alike a chance to develop strategies to keep carbon emissions flat. And there's no "get out of jail free" card; players must use already existing technologies. 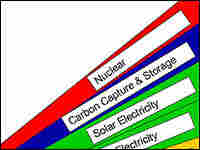 The object of the game is to stabilize greenhouse emissions for the next 50 years by using more efficient technology, such as solar or nuclear energy. hide caption 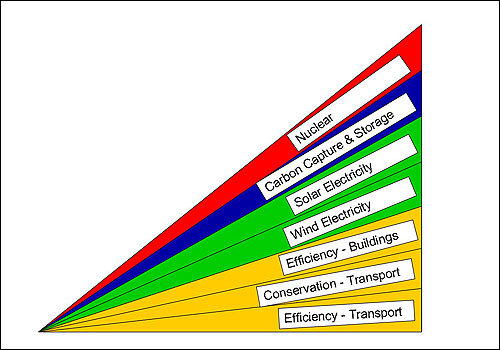 The object of the game is to stabilize greenhouse emissions for the next 50 years by using more efficient technology, such as solar or nuclear energy.

Learn How to Play the Game 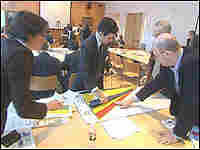 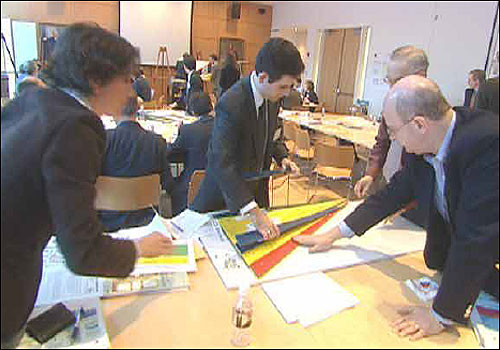 When thinking about climate change and reducing carbon emissions, people often bring up the need for technological breakthroughs. But some experts say we already have all the tools and know-how we need to drastically reduce carbon emissions.

That idea is the basis for a new game. It's being played by school children, policy wonks, scientists, and other groups around the world. Recently, at a business seminar held by the Sustainable Enterprise Academy at York University in Toronto, some executives decided to sit down and give it a try.

The first thing to know is that this game isn't like Monopoly or Scrabble. There's no fake money or cards you can swap. It's more like a thought experiment. Pretend you are a policy maker. Your job is to save the world — by keeping carbon emissions flat over the next 50 years.

"What we're saying is, we need to get started now," says Roberta Hotinski, who is standing in front of a classroom to run the game. "It's certainly a lot easier job if we start now than waiting 50 years. So how do we even get our hands on this problem of what do we need to do?"

One way is to play this game. Here's how it works:

The world's carbon emissions keep going up and up and up. This game takes the projected increase for the next 50 years and slices it into seven equal wedges.

You have to get rid of these wedges. And to do that, you have options. To be precise, you have 15 of today's technologies, such as fuel efficient cars or nuclear power.

Of course, to get rid of just one wedge, you have to scale a technology up. Big time. For example, Hotinski says, just consider fuel efficient cars.

"If we doubled the fuel efficiency of all the world's cars, projected 50 years from now. That would be one wedge," she explains. "So that's a really big undertaking, all the cars in the world, doubling their projected fuel efficiency."

Do you like nuclear power? To get one single wedge with nuclear, you would have to convince the world to triple its number of nuclear power plants. And to get a wedge by growing crops for biofuels, "using current practices, this would take an area the size of India, one sixth of the world's cropland to grow enough biofuels," Hotinski says.

So to play this game, you need to get together with a few strangers or pals. And see if you and your teammates can agree on some mix-and-match combination of seven technologies. Because remember, you need to cut seven wedges to keep carbon emissions flat.

"And no one technology can do the whole job," Hotinski says. She breaks people into three groups and gives them an hour to save the world.

Everyone seems somewhat stunned by what they've just heard, even though these folks mostly work for energy firms and environmental consulting groups.

One player named Scott Grant sums up the general feeling: "Each of these wedges really is huge. Absolutely huge. And the chances of us doing any one of them is small unless we make huge changes."

Still, everyone starts debating. Some of the technologies are a real turn-off for players like Ruth Kelly. "Nuclear, I think, is really a bad choice," she says, "because this affects our children, our great grandchildren — they're left with a horrible mess."

But her teammates overrule her concerns. It's the only group to go for any nuclear energy.

Other strategies are far more popular — almost everyone thinks like a player named Gale Tedhams.

"Can I make a suggestion that we think about efficiency overall?" she asks. "Whether it's transportation, buildings, whatever, industry. Because it seems to me that is the most cost-effective and I think those are the low hanging fruit."

Two groups decide they need to double the fuel efficiency of cars. And everyone agrees that every house and office building should install the most efficient equipment for heating, cooling and lighting. The groups also all like wind energy. They agree to install enough windmills to cover an area the size of Germany.

Two teams decide to drastically cut how much people drive, through things like better public transportation. But some people say that's not realistic, because it's such a fundamental change to the way people live their lives.

Of course, every technology, at such a big scale, would mean big changes. And for many participants, that's how this game hit home.

And the options these groups picked are the basically the ones that Hotinski sees all the time. She works for a group called the Carbon Mitigation Initiative, and she travels all around to promote the game. "We've done it with Princeton researchers and school teachers and high school kids," she says. "And they turn out to be remarkably similar. It really isn't that different from group to group."

This game was created by two professors at Princeton University, Robert Socolow and Stephen Pacala. They wanted to convince people that we already have the tools to solve the climate problem (at least for the next 50 years). And Hotinski says most players do come away thinking that cutting carbon is doable. But they don't think it's going to be easy.