Accessibility links
Brilliant Teen Born to Write Symphonies At age 18, Dominik Maican has already composed six symphonies, one of which has been recorded by the London Symphony. Although child prodigies are nothing new, Maican stands out as a composer of substance. 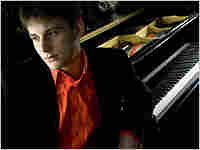 Hear Maican and his music on NPR's radio program 'From the Top' and in concert in Washington, D.C.

The Borromeo String Quartet Plays the Finale from Maican's Quartet No. 2, in Concert at Dumbarton Church

Dominik Maican was born on Beethoven's birthday in 1988, and it appears to be more than coincidental. Maican wrote a song cycle at age 5 and a set of Romanian dances at age 7.

Now 18, Maican has a half dozen symphonies, a mass, chamber pieces and songs to his credit, plus more than 50 composing awards and an appearance on the Today show. The London Symphony Orchestra has already recorded one of his symphonies.

Debbie Elliott visited Dominik, or "Dom," as his friends call him, at his home just outside Washington, D.C.

Those who know Maican and his music say that he's not your average prodigy.

Pianist Christopher O'Riley, host of the classical music program From the Top, sees a career in the making.

"His sincerity and clarity of vision is compelling," O'Riley says. "He has a wonderful sense of the lyric, harmonic, and expressive range of possibility, in addition to a curious musical mind. I expect great things from him in the future, near and beyond."

"He's gifted, and I can't put that into concrete words," Thomas says, "but I know it and I feel it and everybody around him does, too."

Dominik started attending Juilliard at age 12. For the past six years, each Saturday, he and his parents — both musicians — have made the four-hour drive from their Bethesda, Md., home to Juilliard in New York City.

Despite the long drives, Maican believes it was a valuable experience. "I was able to progress with my music," he says. "I started in one place and I managed to correct all my little mistakes and I gained all kinds of techniques."

Maican composes his music in many styles.

"I write very neo-romantic music, but also very modern and minimalist," he says. "It all depends on what I'm doing at that very moment."

His influences range from the pop music he likes — Celine Dion and Nickelback — to the rustic sounds of Romanian folk music. Maican's family has roots in Romania. He says they've visited often, taking trips into the mountains to hear shepherds play folk melodies.

This fall Maican will attend Indiana University, home to one of the largest music schools in the United States. He says he hopes to get a well-rounded education and leave some of his concentrated music studies behind.

"I feel like I need a break from all this intense music study," he says. "It's not a break from music, but I've taken theory at Juilliard for six years now."

Watch a short documentary about Dominik Maican (from the Washington Post)