Accessibility links
At 85, Sam Rivers Creates A Scene In Orlando Multi-instrumentalist Sam Rivers has sparked sessions by Miles Davis and Tony Williams, and he fostered New York's Loft Jazz scene of the 1970s. Now he's doing the same in the land of Mickey Mouse.

When you think of Orlando, Fla., Disney World is probably the first thing that comes to mind. Odds are you don't think of progressive big band jazz. Yet that's exactly what Sam Rivers wants. 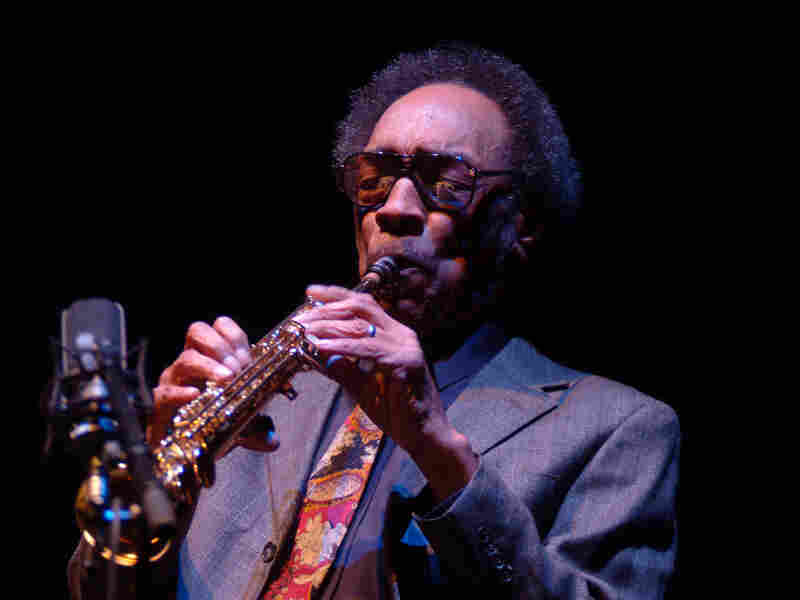 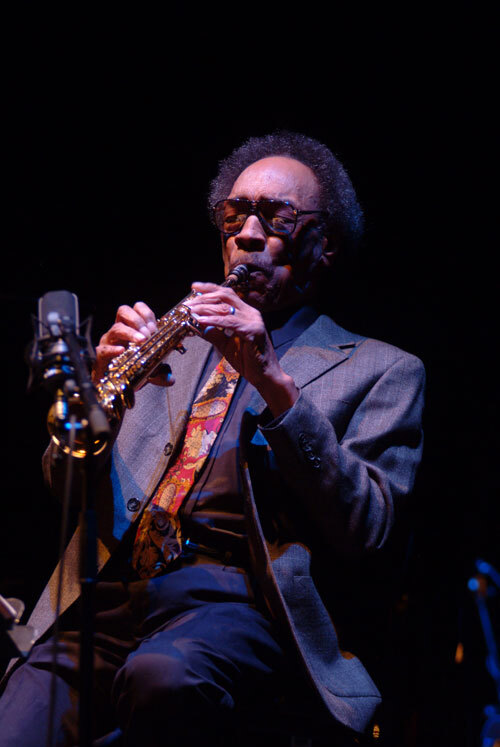 Rivers is a giant of modern jazz. His distinctive saxophone and flute playing made themselves heard in the mid-1960s in Boston and New York. In the '70s, he helped create Manhattan's Loft Jazz scene — inviting some of the era's most innovative musicians and their fans into his home for performances, and spurring others to do the same.

Now 85, Rivers is tilling similar soil in Orlando. He's thin — in the past year he's gone through hip surgery and fought pneumonia. His eyes are hidden behind thick-framed glasses, but his face glows with energy as he gets ready to take the stage at the Plaza Theater in Orlando.

"I'm ready when I come here," Rivers says. "I warm up at home, you know. So I always look forward to it 'cause it's always a different performance. [I] hear it differently, too."

The audience of about 50 is made up of students, older jazz fans and people just curious to hear and see Rivers' big band. Writer Jennifer Greenhill Taylor has been coming to hear Rivers for a decade.

"Sam's music is incredibly powerful," says Taylor, "because Sam himself is an incredibly powerful and enigmatic kind of person and his music is like that. It's so intricate, and there's all these conversations going on up there and the musicians are having such a good time."

Valencia Community College Student D.J. Severence came out to hear Rivers for the first time — because it was a requirement for his music appreciation class.

"I just wanted to check him out, really," Severence says. "It's pretty crazy — it's like, I don't know, it just changed my opinion on music in general. The way he puts out jazz convinces me to look more into jazz."

Rivers wants reactions to his music.

Rivers began to move listeners in the 1960s. His powerful tenor sax was featured on Miles Davis' Miles in Tokyo, Tony Williams' Life Time and Rivers' own Blue Note debut, Fuschia Swing Song, all recorded in 1964.

In 1970, he began to foster a new scene. He opened up his loft to performances and called it Studio Rivbea — the name combined Rivers with Beatrice, the name of Rivers' first wife. It was around this time that fellow saxophonist Hamiet Bluiett met Rivers.

"I walked in and told him my name was Bluiett and I play baritone saxophone. So he said, 'OK Bluiett, yeah good, good. I got a band. Tuesday night. Be there.' So I showed up and that was about it," Bluiett recalls.

Studio Rivbea was one of the focal points for what came to be called the Loft Jazz scene. Bluiett says the space — and Rivers — attracted all sorts of creative people.

"Sam has always been like a teacher, you know. He had all this experience and knew a lot of stuff, so I was glad to be around him," Bluiett says. "It was mainly Sam. Sam is a magnet within himself — he writes all this music and is such a tremendous character; if he puts on anything you want to show up to be a part of it, and be in it, and see what it is going on."

Going Where The Climate Suits His Clothes

The success of the loft scene also led to its decline, as real estate investors cashed in by developing cheap properties that were suddenly hip. So Rivers went to school — teaching at Dartmouth and Cornish colleges, among others. He also toured with Dizzy Gillespie's United Nations Band, which brought him to Orlando. He started thinking about relocating.

"No. 1 because of the musicians available," says Rivers. "Two is because of the weather. I came up in Chicago and Boston and New York and I've always hated the cold weather. This is the first time — in my old age — I've got a chance to enjoy decent weather."

Rivers was able to draw on some of the musicians teaching at area universities — and working at Disney World — to form the Rivbea Orchestra in 1991. Saxophonist Danny Jordan was one of them. He says having Rivers in Orlando transformed the area's music scene.

"It was either Dixieland, or bebop, or fusion," Jordan says. "And each club would sort of purport itself to play either one of those styles of music. And Sam came to town and broke everyone's conception of what was acceptable and commercially viable in town."

For his part, Rivers says living and working in central Florida has not lessened his sense of connection with artists and musical collaborators present or past. The room where he practices is lined with photos. He points to one of him with Spanish artist Joan Miro, who gave him a painting; another shows him with Dizzy Gillespie.

His house has a nice view of Park Lake. But Rivers has drawn all of the window blinds in his music room.

"This is where I do all my work," Rivers says. "Looking at the lake and all those things, that's too distracting. So I'd rather be in here where there's just nice plain walls where I don't start daydreaming because of the beautiful atmosphere."

The room has a computer with music software on it, but Rivers still composes most of his tunes by hand. And at 85, he still practices two hours a day. He says that in central Florida, he's experiencing the most creative time in his life.

"I'm getting more ideas now — I think I'm far more mentally inspired creatively than I was when I was like 50 or maybe even 40," Rivers insists. "I have so many more ideas. I have so much more knowledge. It's great, it's sort of like the universe: The more you see out there, the more there is. I don't expect to ever reach my full achievement. I don't expect to ever have that. Until I pass there's gonna be, like there's always more, you know?"

Sam Rivers is happy to spend most of his time in Florida. But he wants to squeeze in one last international tour. And Rivers is also looking for some institution to give a home to his life's work of more than 300 compositions — before they overwhelm the shelves and filing cabinets that have begun to spread beyond his music room.