Accessibility links
Exercise Studies Find Good News For The Knees It's commonly thought that exercise — particularly running — is hard on the joints. But recent studies show that running doesn't increase the risk of arthritis, and many runners have healthier joints. 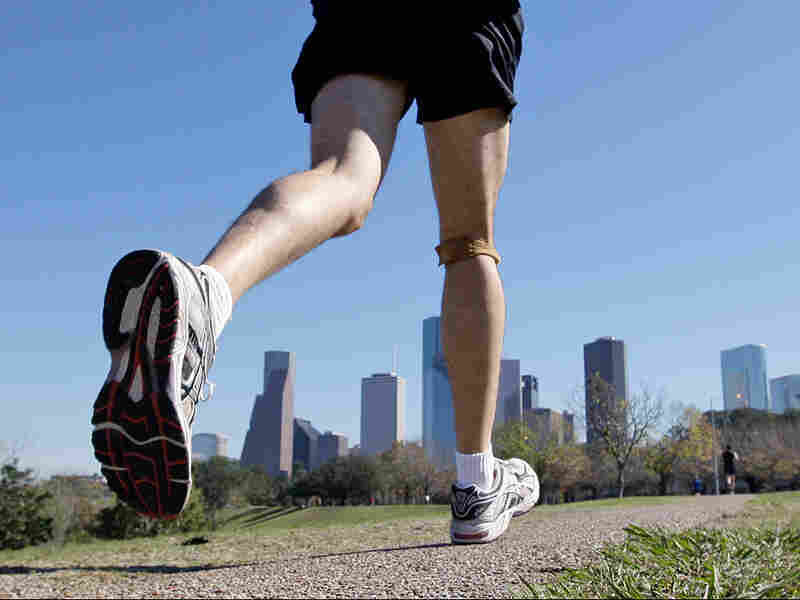 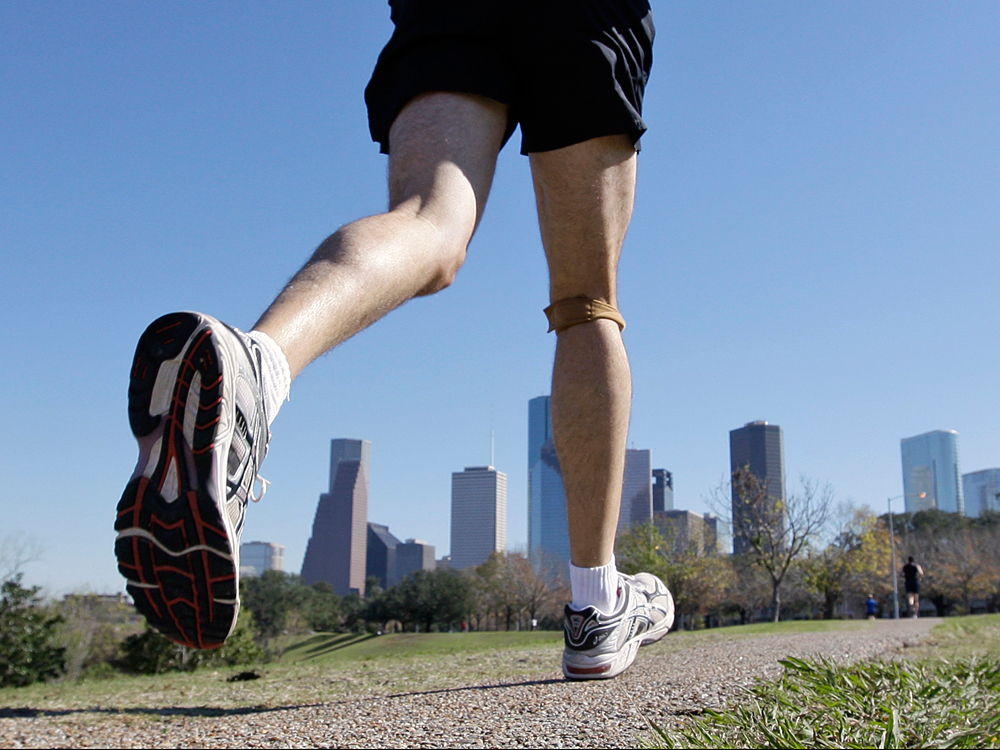 A jogger runs near downtown Houston. Recent studies show that running doesn't increase the risk of arthritis, and some runner's actually have healthier joints.

Common perception has it that exercise can be hard on the joints. But several recent studies suggest that moderately intense, weight-bearing exercises — including long-distance running — do not increase the risk of arthritis.

Physician Harvey Simon, 67, has been running for over three decades. Back in college, they called him "Gazelle," despite his somewhat ungainly stride:

"I'm reasonably lean, but I'm uncoordinated and clumsy. My running stride is something awful to look at," he says, laughing. "But I haven't missed a day of running since Oct. 30, 1978."

No Worse For The Wear

After clocking a little over 100,000 miles over the years, Simon says his knees and hips are no worse for the wear.

"I may be lucky, I may be genetically gifted in that way, but my joints are fine," he says.

The questions remain: Is Harvey Simon an anomaly? Isn't all that pounding bound to do some damage?

Every time a runner strikes the ground he or she applies 8 times their body weight to the joints, says Simon. If you take a 150-pound person, each stride will impose a load of about 1,200 pounds to the body.

"That goes from the foot to the knee to the hip and spine, etc," says Simon. And that's a lot of weight. "Over the course of a mile — that's tons and tons of impact," he says. "So it's understandable that people suspect that may be harmful to joints."

But the most recent studies are showing that for many people, running isn't harmful. In an analysis for Harvard Men's Health Watch, in one long-term study of about 1200 residents of the town of Framingham, Mass., researchers looked for a correlation between arthritis and exercise:

And then there's a study from Stanford University that tracked a group of long-distance runners for 20 years. Researchers compared their health to others of similar age who did much less exercise. They expected to find a lot of problems with the runners' knees, but it turns out they had healthier joints at the end of the study, says Dr. Eliza Chakravarty, a professor of rheumatology at the Stanford School of Medicine.

"It does sort of negate the idea that running is universally bad on the knees," says Chakravarty.

There are, however, some clear risk factors for osteoarthritis related to physical activity, says Steven Blair, an exercise scientist at the University of South Carolina.

"The primary predictor of joint injury is a previous injury," he says. "You may have damaged something as a kid that then causes you trouble later on."

Studies show that if you suffer an injury in a shoulder or knee you're 2 to 5 times more likely to develop arthritis in that joint.

Other risk factors include weight, age, or alignment problems. For example, if one leg is shorter than the other this can put unusual stress on the joints.

There are all sorts of individual exceptions, says Blair, and it's important for everyone to be careful and not over-do it.

But increasingly, he says, the studies are reminding us that the joints were made for moving.