Accessibility links
Literary Detective: On The Trail Of Invisible Ink Weekend Edition literary detective Paul Collins looked into the origins of Yes & Know children's books. They're filled with games and trivia partially printed in invisible ink. Along the way, he found a link to behaviorist B.F. Skinner, as well a new way the technology is being used. 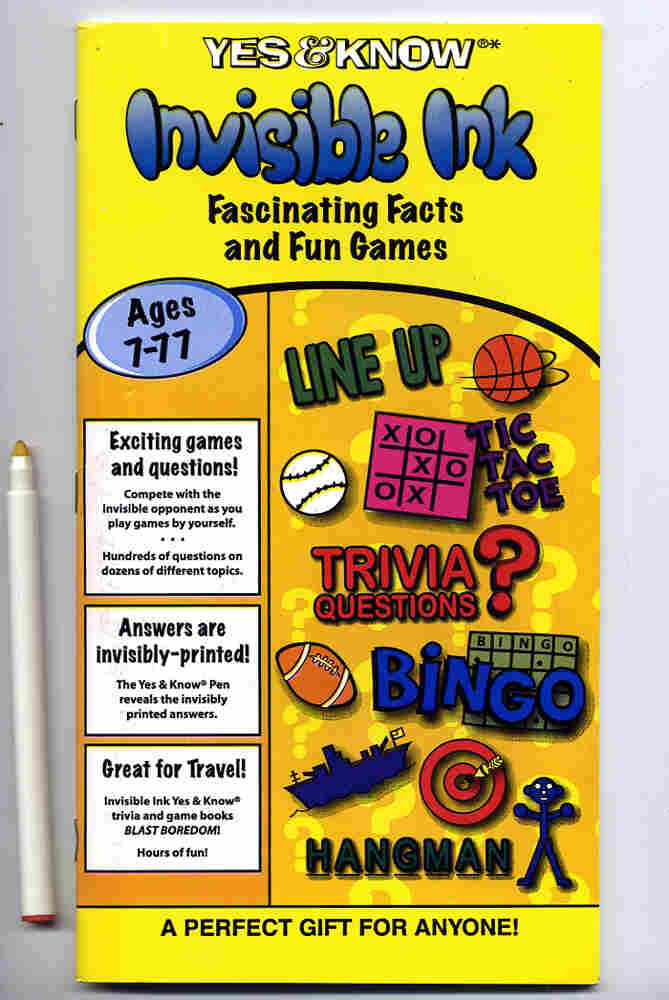 A Yes & Know book, filled with games and trivia partially printed in invisible ink. To get the answers, you need a proper "decoder" pen. Courtesy Paul Collins hide caption 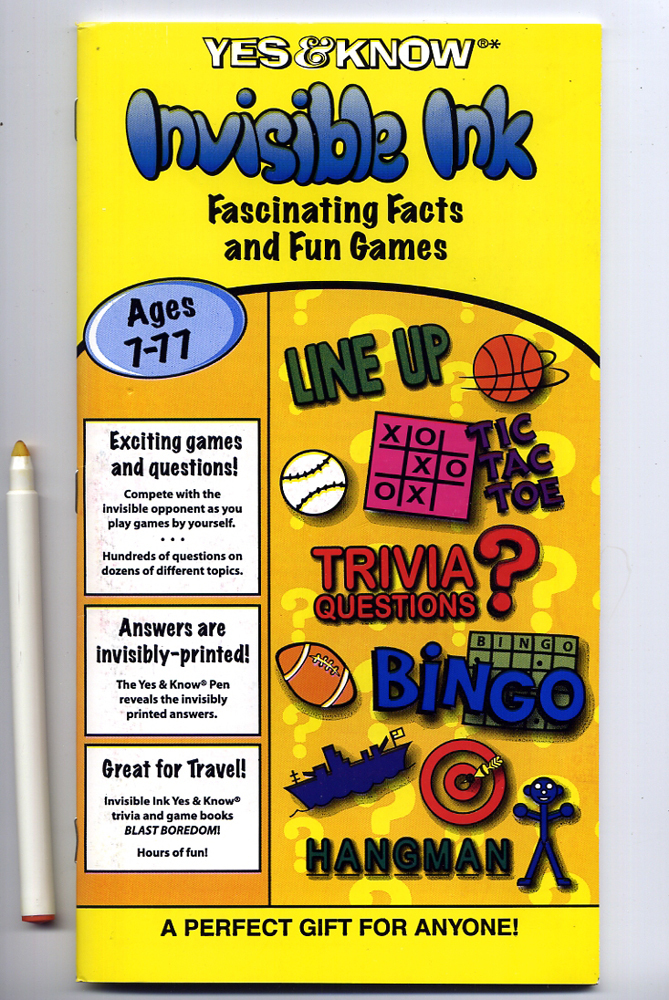 A Yes & Know book, filled with games and trivia partially printed in invisible ink. To get the answers, you need a proper "decoder" pen.

Families who took vacations this summer might have relied on iPods and DVD players to keep the kids quiet in the backseat.

Paul Collins, Weekend Edition literary detective, picked a decidedly low-tech distraction to entertain his children: a Yes & Know book, filled with games and trivia partially printed in invisible ink. To get the answers, you need a proper "decoder" pen.

Collins tells host Scott Simon that the book looked almost exactly like those from his 1970s childhood. Soon after the family trip, he looked into the books' origins.

"When I started digging into this about where these books came from, I tracked it down to Leon Lenkoff," a printer of tapes and labels who lived in Louisville, Ky., until his death in 1986, Collins says.

Over the years, Lenkoff applied for all kinds of game-related patents, starting with one for invisible-ink games — an idea he patented in 1974. Reviewing his patent application, Collins noticed that Lenkoff cited a previous patent "by a guy named Burrhus Frederic Skinner." That would be behaviorist B.F. Skinner, famous for his experiments with rats and pigeons on how they respond to their environment.

Skinner filed his patent in 1968. "His idea was basically having self-correcting worksheets in the classroom," Collins says. For example, students could use invisible-ink pens to work on their handwriting. If they went outside the lines as they were practicing their letters, the paper could turn red.

"Skinner was really fascinated by this idea of automating learning and having teaching machines, and so this idea actually fit into that," Collins says. Lenkoff advanced that concept by using invisible ink for games. 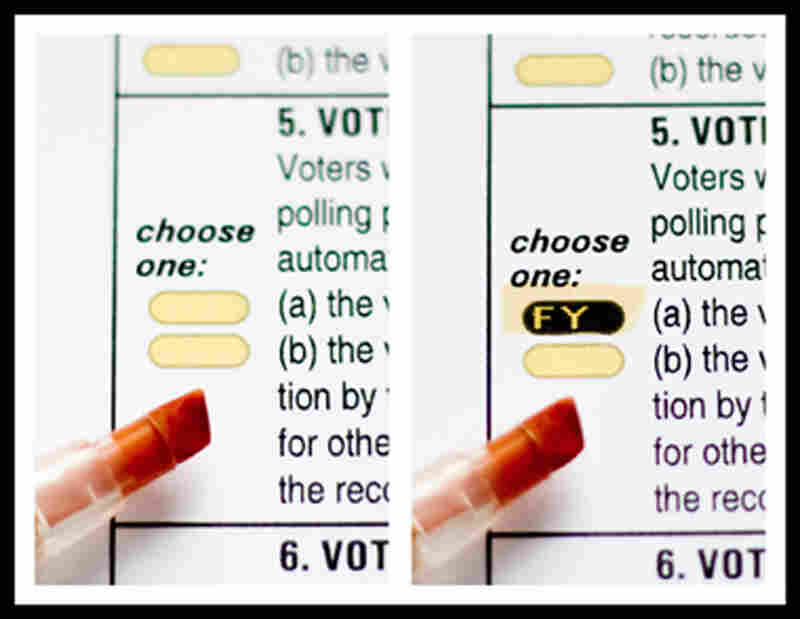 The magic of the decoder pen. Scantegrity.org/Creative Commons hide caption 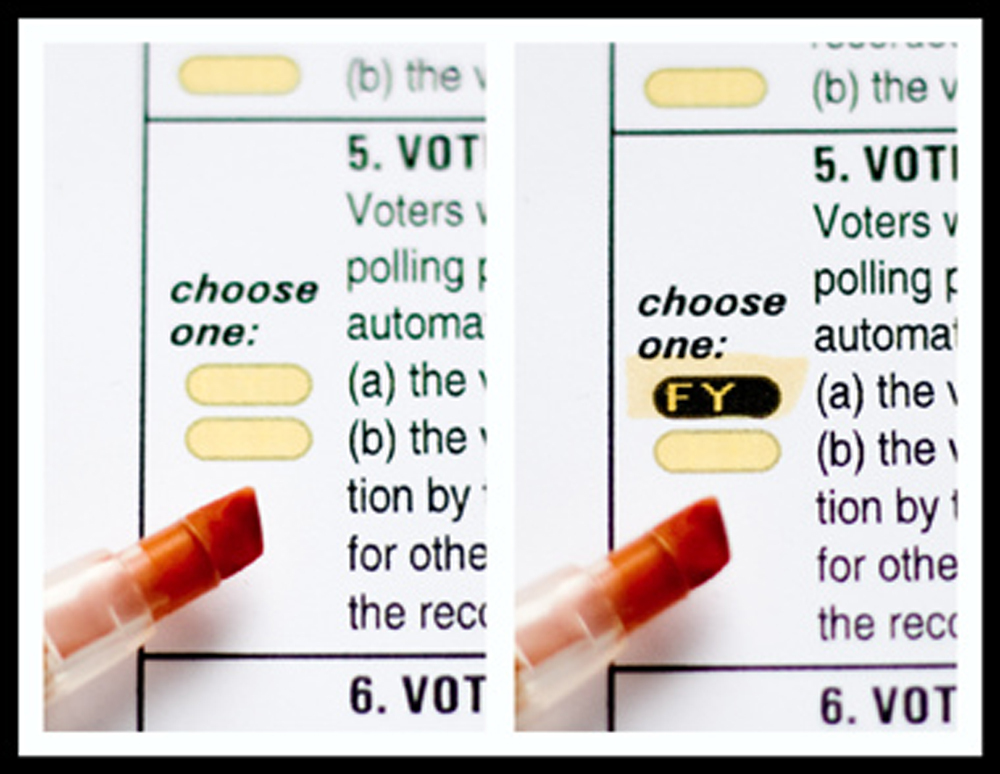 The magic of the decoder pen.

In addition to the Yes & Know books, Collins says this teaching technology has been adopted for an unexpected use: securing voter ballots.

A group led by cryptographer David Chaum, a pioneer of electronic currency, is developing an electronic security system for elections called Scantegrity, Collins says. Conceived at the University of Ottawa, the system involves using decoder pens — the same ones you need to play the Yes & Know games — to fill in bubbles on optical-scan ballots.

"When you do that," Collins says, "not only does it fill in the bubble to indicate your choice, it also shows a unique confirmation code inside the bubble." Voters could then use the codes to confirm their votes were counted.

Collins says Scantegrity and the government of Takoma Park, Md., partnered to conduct a mock election earlier this year, which went relatively smoothly. And though it might sound unusual in the age of so many electronic-voting machines, the city plans to use invisible ink for its municipal elections in November.

"It might have been kind of a hard sell to their board of elections, this new and untested technology," Collins says, "except that everybody actually recognized it from their own childhoods."