Accessibility links
Not All Sunscreens Are Created Equal The SPF numbers on sunscreen bottles only refer to the level of protection against a type of radiation called UVB. But dermatologists say it's important to use a lotion that shields skin from UVA rays, too.

Listen
Not All Sunscreens Are Created Equal 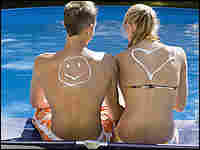 An ounce of sunscreen is enough to cover the whole body – unless you're going for an artistic effect. Birgid Allig/Zefa/Corbis hide caption

Find out how UV rays damage the skin, and get a list of essential sunscreen ingredients.

With the longest days of the year come the most intense rays of sun. Most people have gotten the message that it's important to protect your skin — but not all sunscreens are equal.

Helen Domenici is the mother of two children, ages 2 and 4. An afternoon at the pool takes a lot of coordination for her; she has to schlep all their gear and she needs to make sure her kids are lathered up in sunscreen.

"The most important thing is to do it before you get down to the pool or the destination in the sun," Domenici says.

The sun's much more of a concern now than it was when she was young. "I do worry about it more," she says. "I know I'm wrinkled. I was a sun goddess when I was younger."

Domenici says she ditched the baby oil ages ago and now buys sunscreens with an SPF rating of 30 or higher. SPF stands for "sun protection factor."

The same goes for Robb Carr, father of three. "The higher the SPF, the better," he says.

Dermatologists agree. SPF is important. But it's not the whole story. SPF is an indicator of how well a lotion protects skin from the sun's UVB rays. These are the rays that lead to sunburn.

But there's the catch. Scientists now know it's also important to shield yourself from UVA rays.

"Both sets of rays can cause skin cancer and aging. That's why there's a push for more UVA protection," he says. "Early on in sunscreen, no one really cared about it. They thought that UVB was the culprit."

To make sure you're getting sunscreen with UVA protection, there are a few ingredients to look for. The most common one is a chemical called avobenzone. It shows up on labels under the name Parsol 1789, and products that contain it often say "broad-spectrum protection" on the front of the bottle.

Stanford University dermatologist Anna Bruckner says the problem with these sunscreens is that they just don't hold up on the skin very long.

"They degrade quickly, so the UVA protection is not so robust," she says.

Most sunscreens wear off after two hours, but Bruckner says that some products are better than others. Instead of mere sunscreens, she recommends sunblocks to her patients, particularly ones made with titanium dioxide or zinc oxide.

"The image that many people have is of the lifeguard with the white nose sitting under the umbrella," Bruckner says.

That's the old way of using zinc oxide. But in recent years, the zinc has been broken down into finer particles, so there's no visible glob of white on your skin. Bruckner says these products are gentler on the skin, and they protect against the sun by actually blocking and scattering the light.

According to Bruckner, these new sunblocks "have a fairly broad range of UVA and UVB protection. And they tend to be less irritating," particularly for people with sensitive skin.

Two newer options for longer-lasting protection are sunscreens made with stabilizing technologies that keep the active ingredients from breaking down. One of the products is called "Helioplex." And the other, sold in Europe as Mexoryl, is beginning to make its way to the United States. Dermatologist Darrell Rigel has consulted for Johnson and Johnson, the company that developed Helioplex. He says he likes it that the products last about four hours.

"The advantage of the Helioplex technology, as well as the Mexoryl, is that you don't have to reapply every two hours," says Rigel.

There's a big price difference. Neutrogena's Helioplex sunscreens are about one-third the cost of the Mexoryl products.

Rigel says that perhaps the most important thing when it comes to sunscreens is to put on enough lotion. A full ounce is the recommended amount.

"A shot glass is an ounce," Rigel says. "That is what it takes to cover your body at the pool."

To demonstrate just how much this is, we caught up with 16-year-old Peter Lansworth just as he was about to take a swim at his neighborhood pool in Silver Spring, Md. He admitted that he's not exactly religious about using sunscreen.

So Lansworth agreed to try to apply a full ounce of sunscreen. With lotion spilling out of his palm, Lansworth spread it on his arms first.

"I'm soaking myself with suntan lotion. It's everywhere," he narrated. "Is this how much you think people normally put on? Not in one place, certainly." But once it's spread out all over his body, a shot-glass-full isn't so much.

Here's a trick, if you want to get away with less: crank up the SPF. A half-ounce of an SPF 50 lotion is almost like using a full ounce of SPF 25.

In the near future, there may be an easier way to determine whether a particular sunscreen has UVA and UVB protection. The Food and Drug Administration is drafting a new regulation. Dermatologist Darrell Rigel says it will build on the SPF rating system by adding a pass/fail rating for UVA rays.