Accessibility links
Taming The Wild Beach Plum If you've never seen a beach plum, you're not the only one. They only grow in sandy, coastal areas — and some years, the gnarly, windblown bushes just don't bear fruit at all. Fortunately, there are ways to enjoy them now, and ways to spread them out between years of plenty. 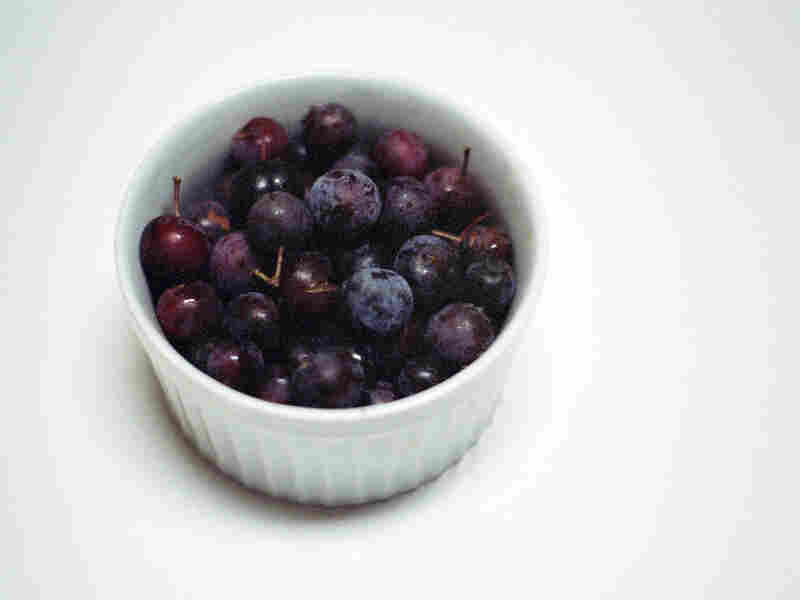 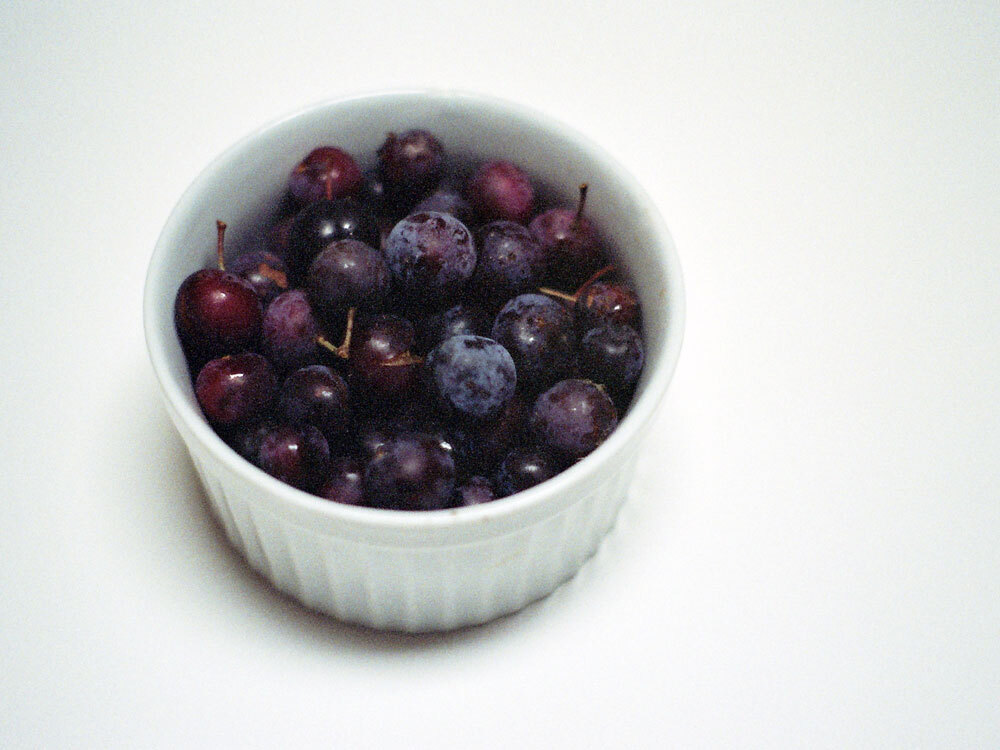 There are certain things you just know. When your boyfriend takes you up to his grandmother's house, sits you down at her kitchen counter and tells you that today you are going to learn how to make the family beach plum jelly, you get the feeling that one day he's going to ask you to be his wife.

Beach plums, on the other hand, are much harder to predict. Some years the fruit shows up, and some years it doesn't. There's really no way of knowing what sort of season it'll be until you grab a bucket and head out to the dunes.

The fall that Alex sat me down in his grandmother's kitchen was a banner year, September 2007. She lives in Truro, Mass., way out toward the tip of Cape Cod, in a squat, square little beach house that she and his grandfather built in the 1950s. I'd never paid much attention to the shrubbery before, but that year, the dunes were absolutely littered with fruit. Twiggy bushes stretched in big, violet waves along the sand — there were gold mine branches along the driveway, plums sneaking out from beneath the deck, and a trail over the dune top where we filled 10-gallon buckets.

Elspeth Pierson is the creator of the Local Food Report, a weekly series on WCAI-FM exploring the local food resources of Cape Cod and the surrounding area. She also writes several columns about eating locally for regional publications, and offers stories and recipes online at diaryofalocavore.com.

During that banner year when the beach plum and I were introduced, Alex and I went picking around his grandmother's house each afternoon. ... We'd pick bucket after bucket and bring the harvest back to his grandmother on her deck, where she'd sit until dark, picking over our haul for twigs and shriveled fruits.

If you've never seen a beach plum, you're not the only one. They only grow in certain places, in sandy, coastal areas with their toes buried near the shore. Growing up along the rocky coast of Maine, I'd had regular plums, of course, but beach plums were something I had never seen. They taste almost exactly like the large plums — only perhaps a bit more tart — but are about the size of a cherry. The bushes are rattled, windblown looking creatures, anywhere from a mere 2 or 3 feet tall to 10, with gnarled, twisting branches stretching out like fingers from their roots. They grow everywhere on Cape Cod, and beach plum jelly is almost as prized a local specialty as fried fish.

During that banner year when the beach plum and I were introduced, Alex and I went picking around his grandmother's house each afternoon. It wasn't easygoing — there was a lot of tromping out across the sand through poison ivy and rough twigs, and always a fair number of leaves catching in my hair — but we must have filled 50 gallons over the course of two weeks. We'd pick bucket after bucket and bring the harvest back to his grandmother on her deck, where she'd sit until dark, picking over our haul for twigs and shriveled fruits.

In the morning, she'd make the jelly. It wasn't a difficult process: Boil the plums with sugar and water, strain the pits, boil the juice with a bit of pectin, and voila — pack it into jars, and that was it. But it was quite a testament to Alex's family line, I thought, that his grandmother at 92 made 250 jars of the stuff.

After watching several mornings in a row, I brought a few buckets home to our own kitchen in Wellfleet, tucked into the woods in the next town over from hers, and tried my hand. I made a batch of beach plum jelly, and then painstakingly picked the pits from the fruit for a few jars of jam. And when I couldn't stand the heat anymore, I threw the rest into a jar with vodka and sugar to make cordial. All winter, we had beach plum jelly on toast, and beach plum jam and peanut butter sandwiches, and we gave away the cordial as Christmas gifts.

It's been two years now since that notable fall. A year later, I became Alex's fiancee, and this November we're getting married. There will be beach plum jam on the cheese plate at the hors d'oeuvres table, perhaps a beach plum chutney alongside a cut of game, and maybe, if we can find enough fruit, beach plum cordial to sweeten the champagne.

It might be hard to predict what the years to come will bring, but it feels awfully good to know I already have a family recipe up my sleeve.

This recipe is adapted from the one Alex's grandmother passed down to me. If you don't have time to make jelly when you pick the fruits, you can make the juice and freeze it until you're ready. This is also a good trick for spreading out the jelly in between years of plenty.* 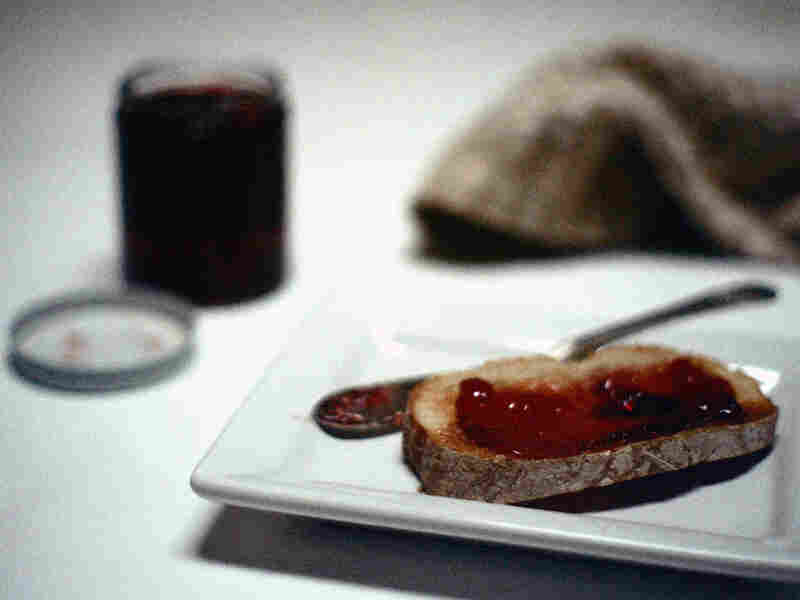 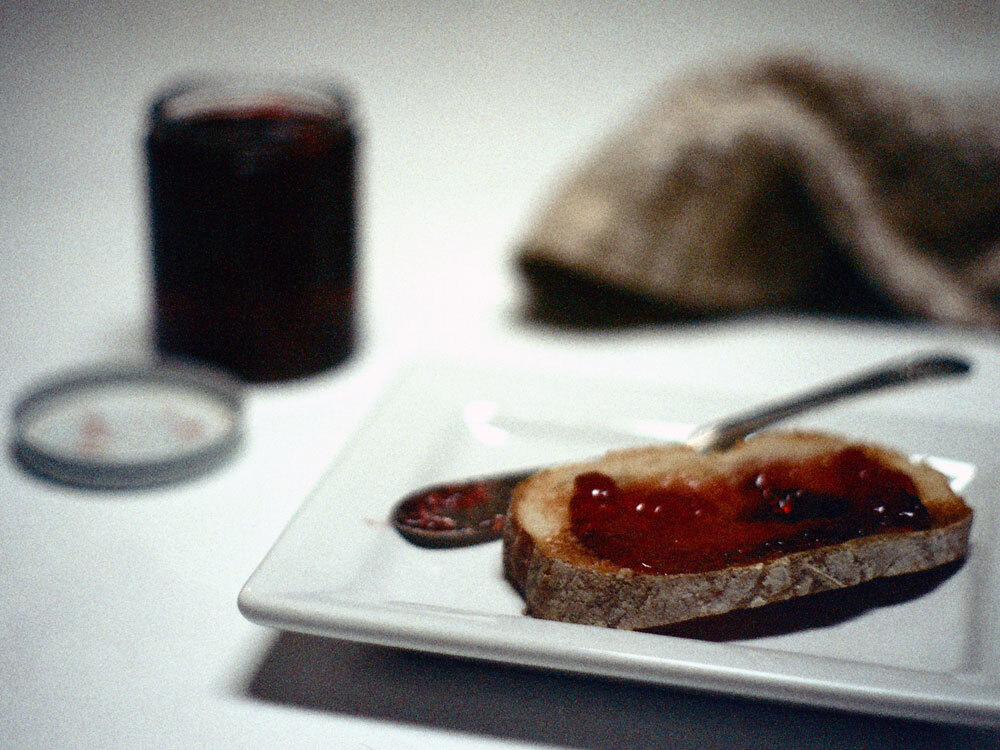 In a large soup pot, cook the beach plums and the water over medium-high heat until the fruit is soft. Set a large mixing bowl underneath a colander and pour the hot juice through, straining out the pits and skins. (Some people say to use cheesecloth, but Alex's grandmother says she never bothers, and her jelly always turns out just fine.)

Measure out 4 cups of beach plum juice. Rinse out the pot and pour in the juice with the sugar. Heat the mixture over medium-high heat, stirring until the sugar is dissolved, and bring it to a rolling boil. Add the pectin and bring the mixture back to a boil for 1 minute. Remove the jelly from the heat and pour it into sterilized jars. Store in a cool, dark place for up to a year.

We made multiple batches of this recipe in September 2007, the big year, once we had exhausted ourselves with making jelly. The cordial not only put the extra fruit to good use, but also made an excellent holiday gift.* 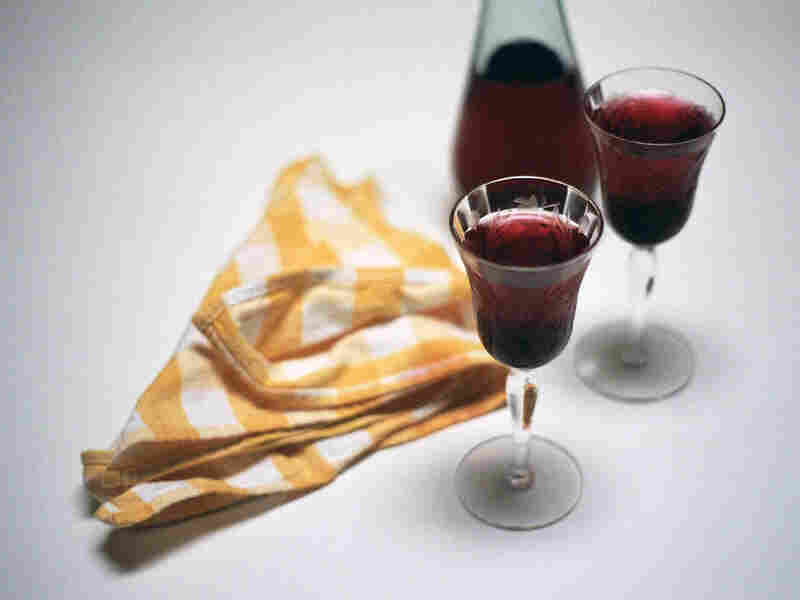 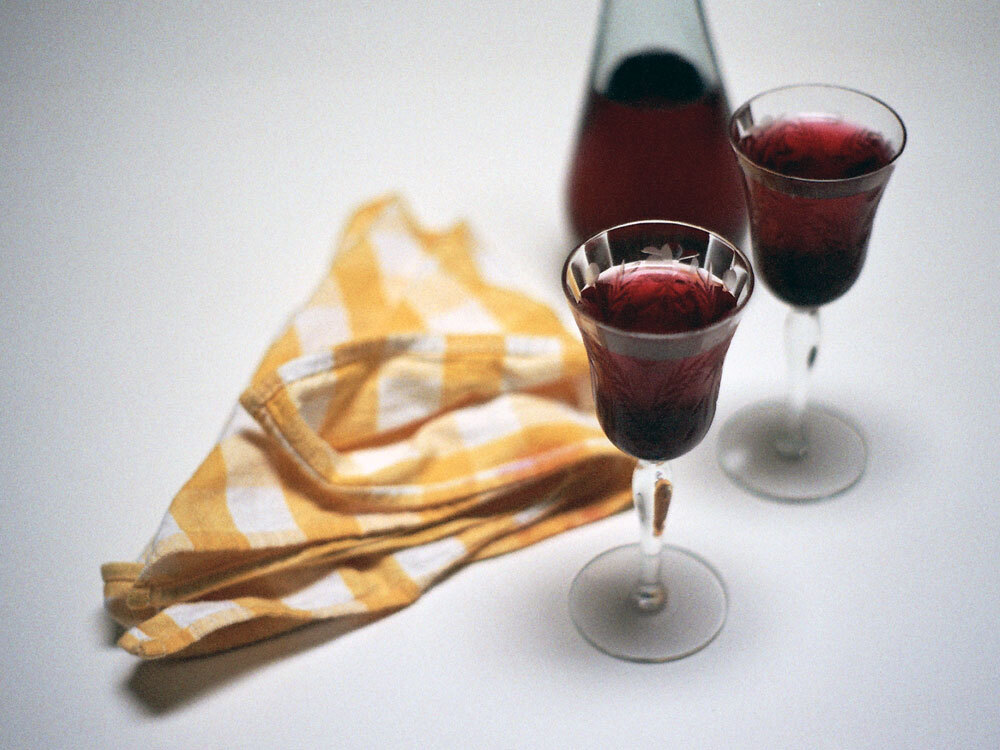 Combine all ingredients in a sterile jar. Set the jar aside in a cool, dark place and give it a good shake every few weeks. Let the cordial stand at least until Christmas — or about 4 months. If you can wait, it will be even better in February or March. When you're ready to drink it, strain the fruit and pits out, and serve it plain or with a splash of champagne.

This cookie recipe is adapted from one I found in a little cookbook devoted entirely to beach plums called Plum Crazy by Elizabeth Post Mirel (Parnassus Imprints Inc., 1973). If you live in an area where the fruit is abundant, this is an excellent book to have on hand. Not only does it have all sorts of creative recipes for beach plums, but it also has a good deal of information on the natural and cultural history of the plant.* 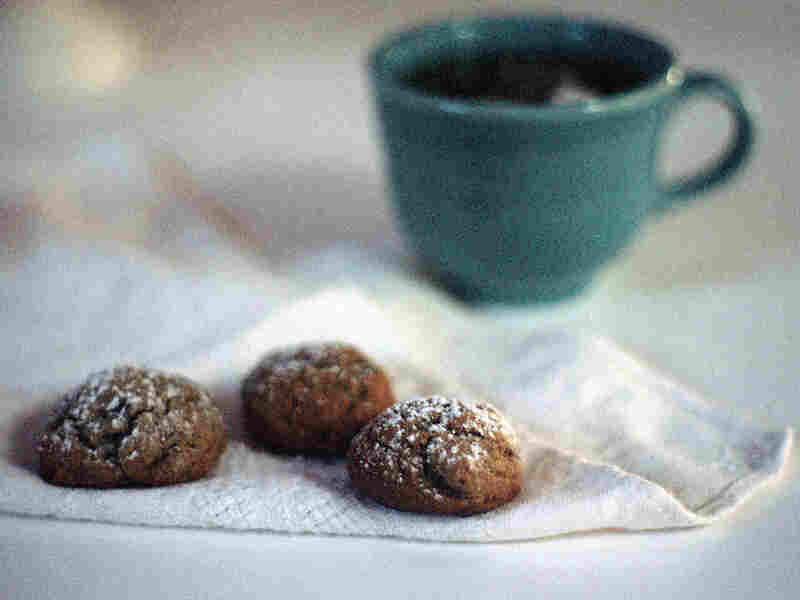 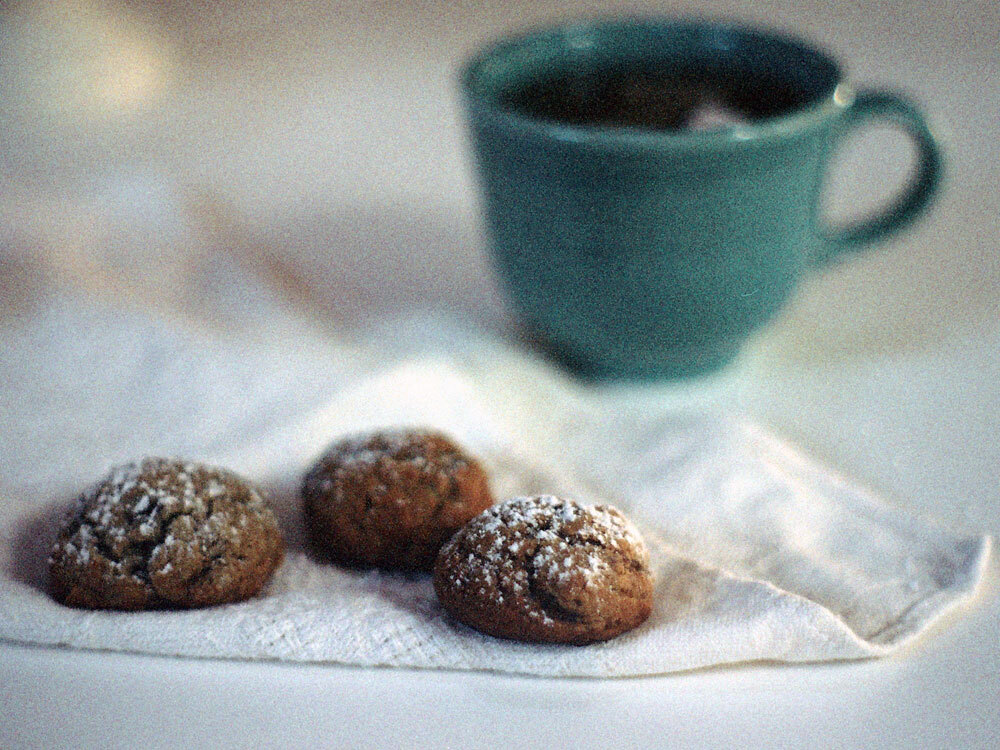 Add the beach plums, 1 cup of the sugar and the water to a small, heavy-bottomed pot. Bring to a vigorous boil for 1 minute, then turn the heat down and let it simmer for about 30 minutes. Every so often, spoon out a little bit of the mixture onto a plate and allow it to cool. When the cooled mixture is the consistency of jam, turn off the heat. (You can also tell it's ready by watching the way the liquid falls from the spoon you are stirring with. When it begins to cascade back into the pot in a thick, constant sheet rather than dripping in individual drops, it is time to turn off the heat.)

In a large mixing bowl, cream the butter and the remaining 1/2 cup sugar. Add the egg and the vanilla and beat until smooth. Beat in 1/2 cup of the beach plum mixture (the rest can be used on toast or saved for a later batch of cookies).

In a separate bowl, whisk together the flour and the baking powder, and stir these dry ingredients into the wet ones. Using roughly 1 teaspoon at a time, form the dough into round cookies and arrange them on a greased cookie sheet. Bake the cookies for 10 minutes or until the edges turn golden brown. Remove the cookies to a rack to cool and dust them with confectioners' sugar before serving.