Accessibility links
How Will More Troops In Afghanistan Affect Obama? There is every indication that Gen. Stanley McChrystal, who this week released his assessment of the war in Afghanistan, will call for more troops. Political commentators E.J. Dionne of The Washington Post and the Brookings Institution and David Brooks of The New York Times discuss what this means for President Obama.

There is every indication that Gen. Stanley McChrystal, who this week released his assessment of the war in Afghanistan, will call for more troops. Political commentators E.J. Dionne of The Washington Post and the Brookings Institution and David Brooks of The New York Times discuss what this means for President Obama.

And joining us now are two political observers: columnist E.J. Dionne of The Washington Post and David Brooks of The New York Times. Welcome back to both of you.

Mr. E. J. DIONNE (Political Analyst, Brookings Institution, The Washington Post): Good to be with you.

SIEGEL: And before we get to some domestic political issues, let's stick with Afghanistan for a moment. How important, E.J., is what the president decides and what's likely to be a recommendation for more troops from General McChrystal?

Mr. DIONNE: This may be more important and it's certainly a lot more difficult than what he's going to tell us on health care this week. This is really very close to an impossible situation. He has no good choices. We started a war in Iraq when we didn't have to and allowed the situation in Afghanistan to get worse and worse. But that doesn't answer the question of what he should do. What you find is his administration is divided. Most - everybody agrees that we have real interest there, but a lot of people wonder if we send more troops, can we achieve our objectives. But he made a promise to say this war in Afghanistan was his priority.

Mr. DIONNE: And so, it's going to be very hard for him to pull away from it.

SIEGEL: David, what do you think?

Mr. BROOKS: Well, he faces a left-right opposition. People on the left have often been suspicious to this war and now there's growing opposition on the right. George Will wrote a column saying we should just get out of Afghanistan.

I - the first thing I think the president needs to do to the country is to explain why we're there. It's not just to prevent Afghanistan from falling apart, it's what would happen if the Taliban destabilize Pakistan, and secondly, to talk about the prospect of success. The Taliban is tremendously unpopular. If you go to Afghanistan, it's not only the U.S. military that is extremely confident that we can win in the long term, it's the NGOs. It's the U.N. people. It's a totally different atmosphere than in Iraq. And so, he needs to somehow communicate that confidence.

SIEGEL: But the challenge seems to be to convince Americans that the war is winnable. Also, to convince Afghans that winning the war is in their interest. And also to convince them that the government that's in the office on the basis of this summer's election is a legitimate government. That's a pretty tall order.

Mr. DIONNE: It is. And I think what's happened around the election is make it - it's going to make it much harder for him to make the case for staying. This feels so much, you know, we make too many Vietnam analogies…

Mr. DIONNE: …but, boy, this feels like a regime that might have stole an election, that might lose legitimacy with the people. The worse news for the president may not be any military news. It's the impact of this controversy over the election.

Mr. BROOKS: The difference with Vietnam is the Taliban is extremely unpopular -has no support in the countryside.

Mr. DIONNE: I agree with that.

SIEGEL: It's building a nation almost from scratch in this case.

Mr. BROOKS: Yeah, but it's easy to get too pessimistic about that. I was there a couple of months ago. I was really shocked at how it's a functioning society. And Kabul looks nothing like it did eight years ago. It's much, much better.

Mr. DIONNE: What's fascinating is that in the reports that Vice President Joe Biden, who is no extreme dove by any means, seemed skeptical of too big a build up and that the administration has either allowed it to come out or it just came out anyway that there's real division inside about what to do. You don't see that very often coming out of the Obama administration.

BROOK: That's absolutely true. There is a lot of division with Joe Biden on the other side. The president though has recently made a pretty strong commitment. It would be stunning if he would turn around now and unmake that commitment.

SIEGEL: Okay. We're going to continue our talk in just a minute. 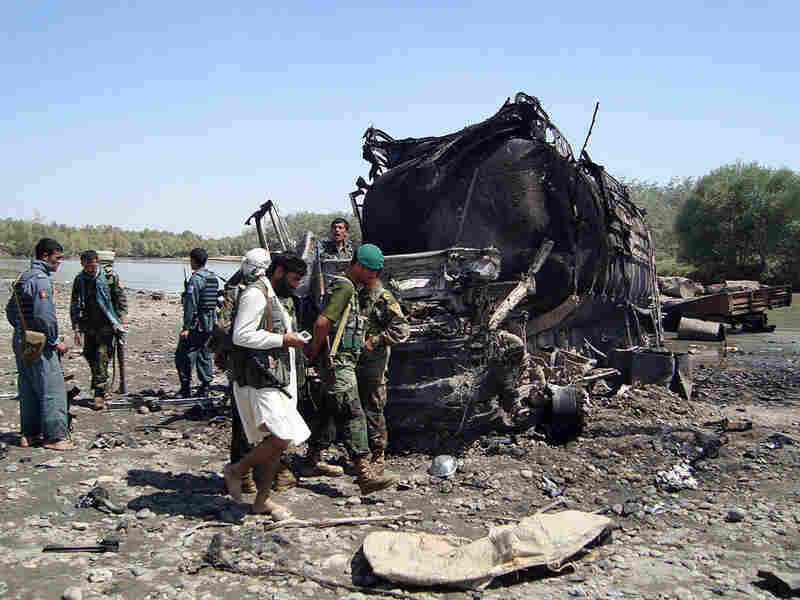 Afghan security forces patrolled the site of a NATO airstrike Friday that destroyed two fuel tankers hijacked by the Taliban near the village of Omar Khel in Kunduz province. AFP/Getty Images hide caption 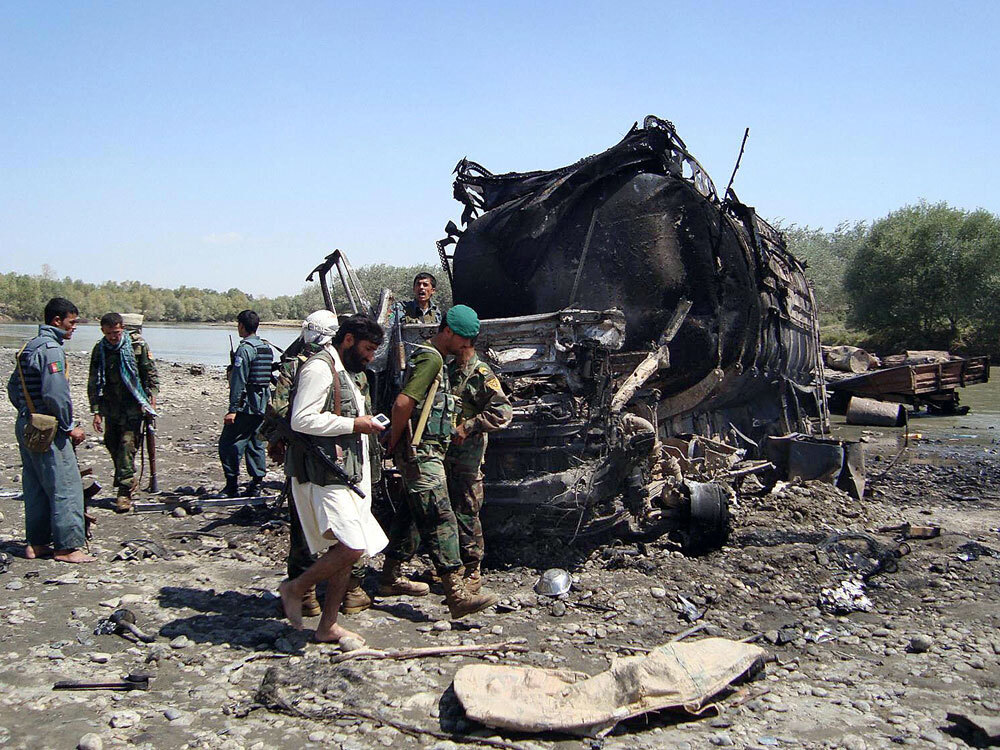 Afghan security forces patrolled the site of a NATO airstrike Friday that destroyed two fuel tankers hijacked by the Taliban near the village of Omar Khel in Kunduz province. 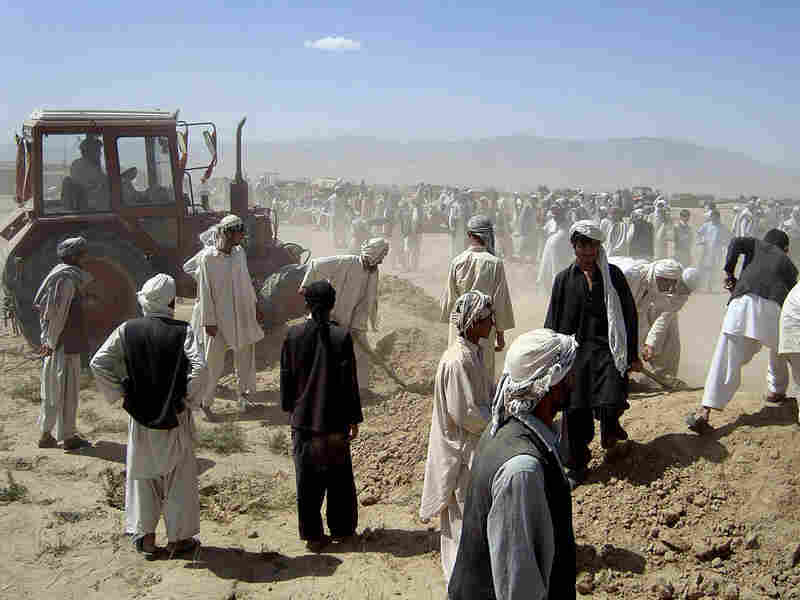 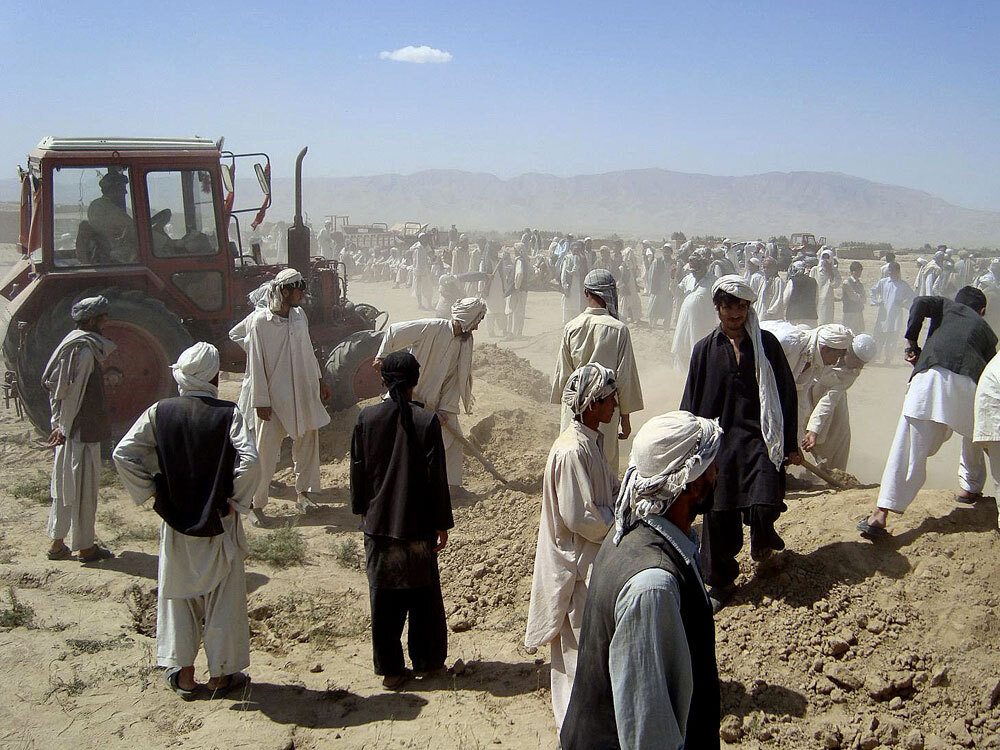 Local Afghans bury villagers killed by the NATO strike in a mass grave. Kunduz Gov. Mohammad Omar said a local Taliban commander and four Chechen fighters were among the dead.

A NATO warplane killed at least 60 people and wounded 30 others — including suspected Taliban fighters and civilians — during an airstrike Friday in northern Afghanistan, local officials said.

The overnight strike targeted two fuel tankers that had been hijacked by Taliban militants in the northern province of Kunduz. The trucks were en route to Kabul from neighboring Tajikistan to deliver fuel to NATO forces when they were commandeered.

The Taliban drove the tankers some three miles off the main highway before getting stuck in a riverbed. Hours later, they enlisted the help of locals to unload the fuel. That's when a U.S. warplane arrived and fired on the tankers, creating a massive fireball.

Local authorities said a senior Taliban commander and four Chechen fighters were among those killed in the airstrike. Reports said an undetermined number of civilians who had rushed to the scene to collect fuel were also killed.

NATO officials maintained that there were no civilians in the area during the attack, which happened at about 2:30 a.m. local time. However, alliance chief Anders Fogh Rasmussen later acknowledged that some civilians may have been killed. NATO officials are investigating.

President Hamid Karzai expressed concern about reports of civilian deaths. He has dispatched a team of police and intelligence agents to the scene to investigate the incident, according to a prepared statement released by his office.

Kunduz province, a former Taliban stronghold, had been generally peaceful until insurgent attacks began increasing earlier this year — possibly because the area lies on a smuggling route from Tajikistan. Most of the fighting in Afghanistan this summer has occurred in the south and east, where U.S. and British forces operate. The German military is responsible for security in Kunduz, and its forces called in the airstrike.

The attack is likely to intensify public anger in Afghanistan over NATO strikes that have killed civilians. Earlier this summer, Gen. Stanley McChrystal, commander of U.S. and NATO troops in Afghanistan, ordered curbs on airstrikes where civilians are at risk.

His order mandated that aircraft are not supposed to fire unless they are sure there is no chance civilians can be hurt or are responding to an immediate threat.

Faced with increasing violence in Afghanistan, Defense Secretary Robert Gates said Thursday that he would consider asking for more troops and resources — despite declining support for the war in the U.S.

President Obama ordered an additional 21,000 U.S. troops to Afghanistan this spring, shifting the focus of the war on Islamist extremism away from Iraq. Last month, 51 U.S. service members were killed in Afghanistan, making August the deadliest month for American forces there since the U.S.-led invasion in late 2001.

Also Friday, a French soldier was killed and nine others were wounded when their convoy was hit by a bomb near Bagram Airfield north of Kabul.