Accessibility links
August Unemployment At 26-Year High The Labor Department said Friday the nation's unemployment rate rose to 9.7 percent in August, the highest since 1983. But the economy shed a net total of 216,000 jobs, the fewest monthly losses in a year.

The Labor Department said Friday the nation's unemployment rate rose to 9.7 percent in August, the highest since 1983. But the economy shed a net total of 216,000 jobs, the fewest monthly losses in a year.

From NPR News, this is ALL THINGS CONSIDERED. I'm Noah Adams.

The economy lost 216,000 jobs in August, according to the Labor Department, and that is the good news. A report out today shows that while the economy continues to shed jobs, those losses are getting smaller with each passing month. But the jobs report also had some sobering news. The unemployment rate in August jumped to 9.7 percent.

And as NPR's Frank Langfitt reports, many economists think it will continue to rise well into next year.

FRANK LANGFITT: In the American labor market, everything is relative. The loss of 216,000 jobs in August may not sound good, unless you compare it to last January. That month, the economy lost nearly three-quarters of a million jobs. Christina Romer, the White House's chief economist, said the August job losses aren't good, but clearly headed in the right direction. Here's how she put it on CNBC.

LANGFITT: Now, the bad news. More and more people are spending more time out of work than ever before. Today's report show that the number of long-term unemployed, people out of a job for more than half a year, has risen to nearly five million. Heidi Shierholz works for the Economic Policy Institute, a labor think tank in Washington, D.C.

Ms. HEIDI SHIERHOLZ (Economic Policy Institute): In this recession, we are shattering all records related to links of unemployment.

LANGFITT: The reason comes down to basic math. Employers continue to lay off workers, but most companies are still too worried about the economy to start hiring again. And today's report suggests a return to hiring is still months away. Employers have slashed worker hours to historic lows. In August, the average work week was just 33.1 hours. Shierholz says most employers will start restoring hours to current workers before hanging out help wanted signs.

Ms. SHIERHOLZ: As the recovery starts to take hold, employers have a lot of wiggle room to expand labor without actually hiring any new people.

LANGFITT: These stark figures are taking an emotional toll on the unemployed. In the past year, the number of discouraged workers, people who aren't looking for work because they don't think there's a job out there for them, has nearly doubled.

LANGFITT: In March, Cheryl Adams lost her job as an accounts payable clerk at a radio network in Maryland. I met her yesterday in the lobby of Montgomery Works, a local employment office. She was wearing a white T-shirt, jeans and greying dreadlocks. Adams says she does get job interviews, but competition is stiff, and she doesn't want to become one of those discouraged workers.

Ms. ADAMS: I just have to, just keep praying every day just to keep my sanity, to keep on - to, out here, look for a job 'cause I know there's one out there somewhere.

LANGFITT: Before the recession, Adams moved in with her daughter so she could spend time hunting for a new apartment. Now, without a job, Adams is trapped there. She says most of her possessions are in storage. And she spends each night on the couch.

Ms. ADAMS: It bothers me a lot because I expected to be 50 and at least be in a stable position in my own condo, townhouse, something.

Ms. ADAMS: Hold on, this might be a job. Hello?

LANGFITT: A glimmer of hope.

LANGFITT: A job in Northern Virginia. A school needs an administrative assistant.

Ms. ADAMS: And you do the same. Bye-bye.

LANGFITT: The interviews are this weekend. Most analysts think the country is pulling out of recession. But Heidi Shierholz, the labor economist, says hiring will lag in economic expansion for months.

Ms. SHIERHOLZ: It's not going to go fast enough that will be generating enough job growth to start bringing that unemployment rate down until probably the third quarter of next year.

LANGFITT: Shierholz predicts the unemployment rate will top out around 10.3 percent towards the end of next summer. 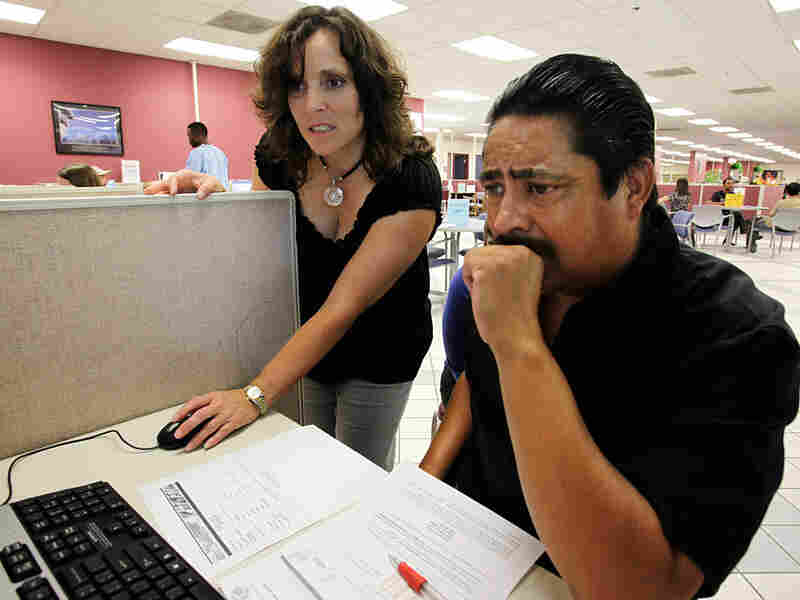 Sergio Fuentes, who is unemployed, gets some help with his job search Tuesday at the California Employment Development Department in San Jose, Calif. Paul Sakuma/AP hide caption 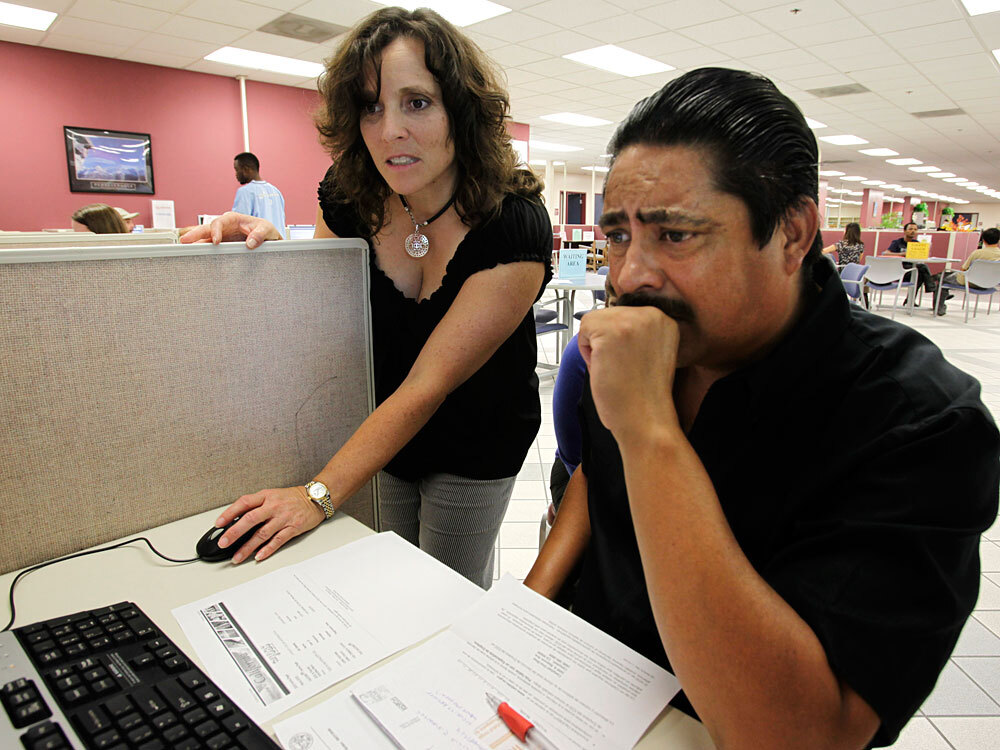 Sergio Fuentes, who is unemployed, gets some help with his job search Tuesday at the California Employment Development Department in San Jose, Calif.

The nation's unemployment rate jumped to 9.7 percent in August, even as employers shed fewer jobs than predicted for the month — a mixed signal for an economy that many believe is on the mend after its worst slump in decades.

The latest data from the Labor Department showed employers eliminated 216,000 jobs last month. That represents the smallest decline in payrolls in a year. That better-than-expected figure was offset by a 73,000-strong increase in the labor pool, an indication that some laid-off workers who had given up looking for work were again in the market.

Analysts had expected the jobless rate — now at its highest level since June 1983 — to tick up to 9.5 percent from 9.4 percent in July. But they also thought payroll reductions would total 225,000.

The number of jobs lost last month is a far cry from the 600,000 or more jobs shed each month during the winter and spring. It's an encouraging sign despite the higher unemployment rate, says Stuart Hoffman, chief economist of PNC Financial Services Group.

"We're at the point where the slowdown in layoffs will lead to some hiring and job gains, not in the next few months but probably by the first part of 2010," Hoffman told NPR.

His assessment echoed what Federal Reserve policymakers said last month when they forecast that the economy would pull out of recession in the second half of the year.

The minutes of that Fed meeting, released Wednesday, said market conditions remained "poor" and that the many companies were likely to be "cautious in hiring" even as the economy picks up. Many private economists, and the Federal Reserve, expect the unemployment rate to top 10 percent by the end of this year.

But "generally speaking ... the report tells us that the economy continues to contract, although it's not contracting at as severe a pace as we saw in the first part of the year," he told NPR.

Some economists credit the Obama administration's $787 billion economic stimulus package of tax cuts and spending increases, along with the Cash for Clunkers program, with contributing to a recovery.

But they worry about what will happen when the impact of the stimulus efforts fades next year.

In remarks at the G-20 meeting of finance ministers Thursday in London, Treasury Secretary Timothy Geithner said fears persist that curtailing government spending and monetary stimulus too soon could result in a "double dip" recession.

"You're seeing the first signs of positive growth now in this country and countries around the world," Geithner said. "We've come a very long way, but I think we have to be realistic. We've got a long way to go still."

Christina Romer, chairwoman of the White House Council of Economic Advisers, told CNBC television Friday that "the trajectory is in the right direction."

The Way We Work: Signs Of Life In the Labor Market

Meanwhile, more job cuts were announced this week. Washington-based industrial technology firm Danaher Corp. said it will lay off about 3,300 of its roughly 50,000 employees, an increase from the 1,700 cuts it announced in the spring. American Airlines said it will cut 921 flight attendant jobs as it deals with an ongoing downturn in traffic and lower revenue.

Health care and educational services was the only bright spot, adding 52,000 jobs.

The Labor Department report said the rate of underemployment — a measure that includes people who have either given up on looking or settled for part-time work — reached 16.8 percent, the highest on records dating from 1994.

The number of weekly hours worked remained at 33.1, above the low of 33 reached in June. Economists think companies will add more hours for current workers before hiring new ones.

Since the start of the recession in December 2007, 6.9 million jobs have been lost. There are now 14.9 million unemployed Americans.