Accessibility links
Movie Review - Capitalism: A Love Story - Michael Moore's Latest Target Is The System Itself Michael Moore is famous for skewering the excesses of American industry — and in his latest film, he goes looking (mostly on Wall Street) for the source of the trouble. Critic Kenneth Turan says that while Capitalism certainly has spirit, the pop-culture polemicist may have taken on more than he could chew. 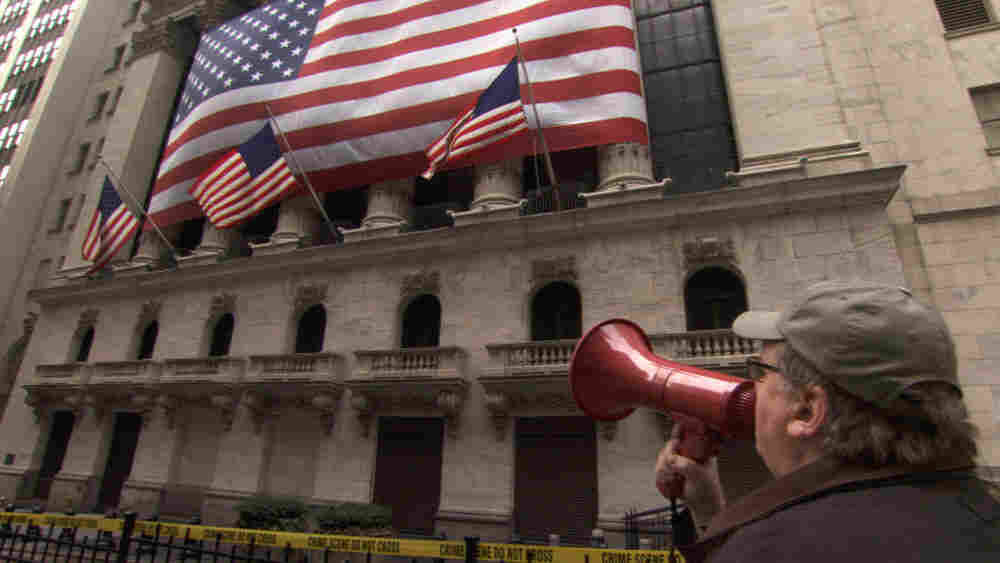 In 'Love' And War: Documentarian Michael Moore pulls one of his (in)famous stunts by declaring all of Wall Street a crime scene. Overture Films hide caption 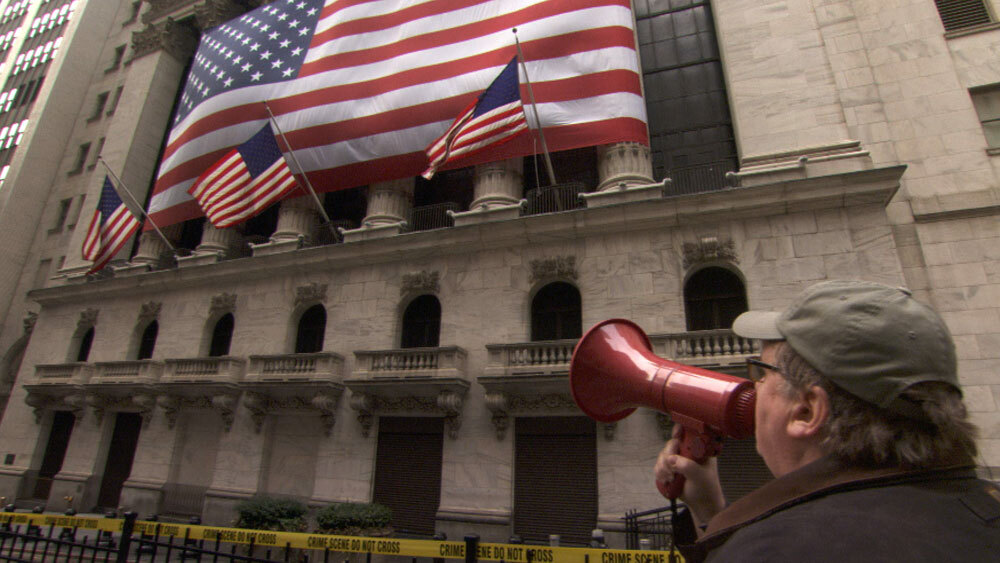 In 'Love' And War: Documentarian Michael Moore pulls one of his (in)famous stunts by declaring all of Wall Street a crime scene.

Not rated, but sure to offend Wall Street, along with a certain percentage of Main Street

Dropping In On GM

Capitalism: A Love Story is more than Michael Moore's latest documentary — it's the summation of the movies he's been making for the past 20 years. He lays all the ills of American society at the feet of an out-of-control free-market system — a system he detests so much that he puts priests on camera to talk about capitalism's moral evils.

Clearly Moore has not lost his provocateur's gift. But not even the director's pot-stirring skills can quell the suspicion that Capitalism would have benefited from the narrower focus that helped give his earlier films such punch. This picture comes by its scattershot approach naturally — just ask Karl Marx, who spent 18 years researching and writing his multi-volume Das Kapital — but it's still distracting.

That said, Moore's scattershot is a lot more interesting than some filmmakers' focus, and many of his individual sequences are classic. The director hasn't lost his zest for confrontational antics: He surrounds all of Wall Street with yellow "crime scene" tape to emphasize his low opinion of the area's activities, and he drives an armored car up to AIG's corporate headquarters, demanding that the company return federal bailout funds.

The main point Moore wants to make — the thing that drives him craziest — is his notion that capitalism, far from being a system that rewards excellence, is a scheme set up to make a profit on absolutely anything, a system that has turned American society into a culture that says money is the only value.

In the end, perhaps the most startling thing about Capitalism is that Moore stands revealed not as some pointy-headed socialist, but as an unreconstructed New Deal Democrat. He admires Franklin D. Roosevelt, believes in increased democracy and opportunity, and feels that the decades-long weakening of unions has fatally weakened America. The fact that this will be a controversial stance says as much about today's political culture as it does about Moore's place in it.