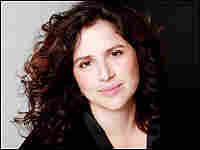 No Moon at All

You Never Told Me That You Care

At 12, Anat Cohen picked up the clarinet.

At 16, she began playing saxophone, suing her talents to play big band music at her school in Tel Aviv.

Her brothers Avishai, who plays trumpet, and Yuval, a sax player, were also smitten by jazz. The siblings played bebop in the family's living room.

Now Cohen lives in New York and has turned her talents to two new CDs — Poetica and Noir — which reflect two of her jazz loves.

On Poetica, she leads a small jazz combo and a string quartet to demonstrate what she has learned on the clarinet.

She uses the clarinet even for "Lonnie's Lament," a 1960s staple by John Coltrane's Classic Quartet. Cohen says to play the song on the saxophone — which Coltrane did — is "almost impossible." But finding the soul and spirit of the song on clarinet gave her a new way to touch on Coltrane.

Noir, on the other hand, is a full-on big band CD, albeit a modified one. Her "Anzic Orchestra" is uniquely orchestrated with a large horn section, a guitar in place of a piano and trio of cellos. The arrangements on Noir are anything but black — they are life-affirming and intriguing.

Anat Cohen and the Anzic Orchestra will make their debut with a run at the legendary Village Vanguard July 2-8, 2007. On the first date, they substitute for the famed Vanguard Orchestra.