Accessibility links
Iraqi Exiles in Syria Look for Ways to Move On Millions of Iraqis have fled the violence at home for neighboring Syria and Jordan. But their welcome is wearing thin, and many are looking for ways to move on to other destinations.

Listen
Iraqi Exiles in Syria Look for Ways to Move On 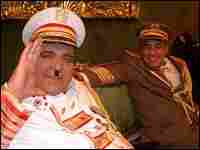 Iraqi actors Rasam al-Jumali (left) and Zuahir Mohammed Rashid are among the cast of a television comedy series being taped in Damascus, Syria, for a channel banned by the Iraqi government. Deborah Amos, NPR hide caption 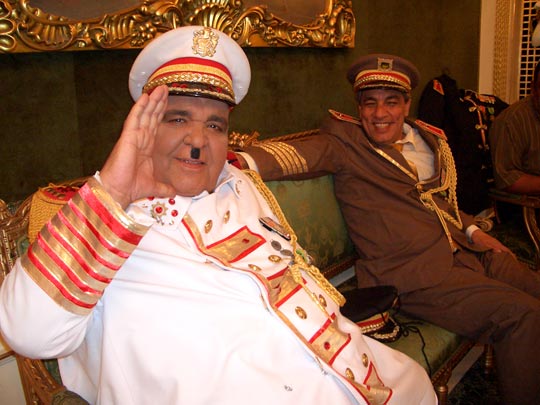 Iraqi actors Rasam al-Jumali (left) and Zuahir Mohammed Rashid are among the cast of a television comedy series being taped in Damascus, Syria, for a channel banned by the Iraqi government.

The Music of Exiles 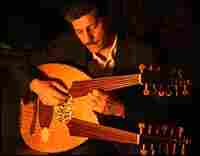 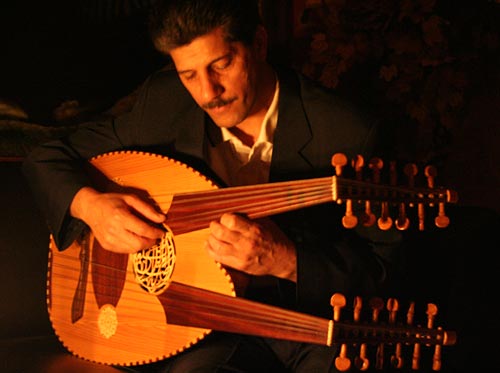 On World Refugee Day this week, the United Nations High Commissioner for Refugees launched a campaign called "Express Yourself." Iraqi artists in exile in Syria were invited to a recording session.

Read More about 'Express Yourself' 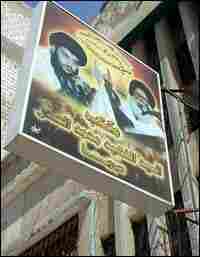 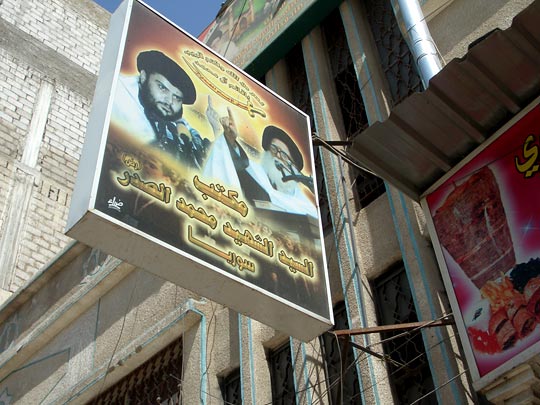 Radical Iraqi Shiite cleric Moqtada al-Sadr has opened an office in the heart of the Iraqi exile community in Damascus.

Human rights organizations say the flow of Iraqi refugees forced out of the country by violence is a silent crisis. There are no posters of starving Iraqi children to spur awareness and fundraising campaigns. Iraqi exiles don't live in refugee camps and most aren't starving — not yet, anyway.

But their numbers are unprecedented — about 2 million are living in neighboring Jordan and Syria and 30,000 more flee every month. But their welcome is wearing thin, and many are looking for ways to move on to other destinations.

The Syrian government requires Iraqis to leave the country every three months — so the exiles are forced to make a hot, dusty and expensive 12-hour roundtrip bus ride to the Syrian-Iraq border to get their passports stamped. The regulation seems designed to address growing Syrian resentments and to demonstrate that Damascus controls the border and those who cross it.

Leith Imad Adeen, who arrived in Damascus a few weeks ago, says Syria is safer than Iraq, but it is a tough place to live.

"Finding a house, we are all here jobless, and it's hard to deal with the Syrian people nowadays," Adeen says.

A few doors down from the bus office, another agency offers aid to Iraqis struggling far from home. But that aid is also an organizing tool for Moqtada al-Sadr, the radical Shiite cleric who plays a powerful role in Baghdad politics. Sadr recently opened an office in Damascus — in the heart of the Iraqi exile community.

Prayer rugs cover the floor, and a creaking fan barely moves the thick air. Sheikh Radi al-Qademi, a cleric in a turban and black robes, is Sadr's representative in Syria. Al-Qademi says his orders come from Sadr — not from the Iraqi government.

"We have no relations at all with governmental work," Qademi says. "We have nothing to do with this."

"We look after the large number of Iraqis, trying to solve their problems, sometimes help them," he says. "We are trying to offer the best we could in relieving their situation."

But many Iraqis say Sadr has another agenda in this large exile community — exporting the sectarian divide that is now tearing Iraq apart. Sunnis are discouraged from living in this predominantly Shiite neighborhood in Damascus, Iraqis say. Shiite businessmen are warned to sever ties with Sunnis.

But Qademi dismisses the accusations.

"Many of our brother Sunnis, they come to here and we help them," he says. "This ethnic split, troubles in Iraq have been created by the occupation."

Sadr isn't the only one organizing in Damascus.

An all-night production in a Damascus ballroom features Iraqi actors in exile. They are taping a television series for a channel banned in Baghdad by the Iraqi government. But the channel is still beamed into the country by satellite.

Actress Maize Gomar, in a very short, very tight military uniform, plays a government minister in the production, called News of the Country. The director, Ahmad Shukry al-Akeedy, describes it as a black comedy.

He explains that the television series is a savage satire designed to increase Iraqi resentment of the government.

The plot, he says, involves ministers who know nothing about politics and everything about corruption. It will be broadcasting during Ramadan, the month of religious fasting that is primetime television viewing — 30 episodes of ridicule, he says.

Al-Akeedy's eyes well up as he recalls the details of how his brother, an Iraqi officer, was killed in front of his wife and child.

Even in this troupe of comic actors, there's enough tragedy for a lifetime.

Every Iraqi exile has a similar story. Many have concluded that they are not going home anytime soon. So another kind of organizing has begun — human smuggling. The preferred destination: Sweden.

It is impossible to confirm the numbers, but many Iraqis in Damascus say that as their desperation grows, so does the smuggling business.

It is a gamble, Adeen says, but one that seems worth taking. It's a way to move on from Syria as the war in Iraq drags on.