Accessibility links
In Kenya, Tea Auction Steeped In Tradition, Gentility Kenya exports more black tea than any country in the world. By tradition, East African tea sells at auction in the port city of Mombasa, where traders and brokers come together at the Mombasa Tea Auction and, ever so politely, move an enormous amount of black tea around the world. 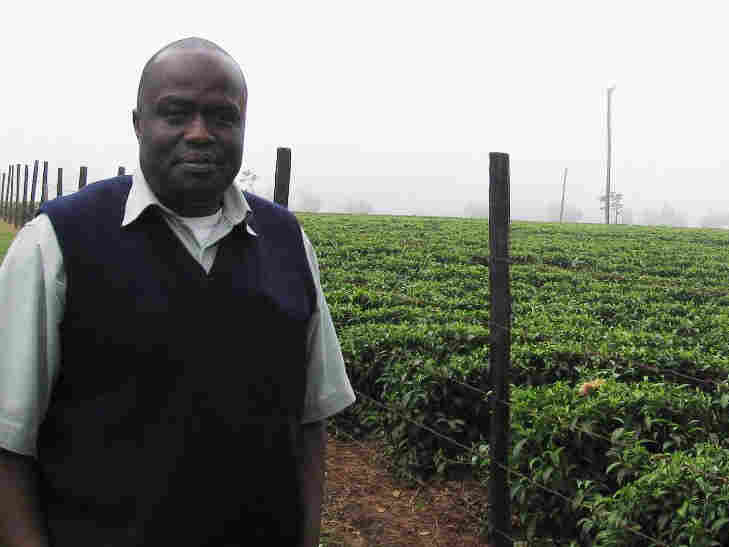 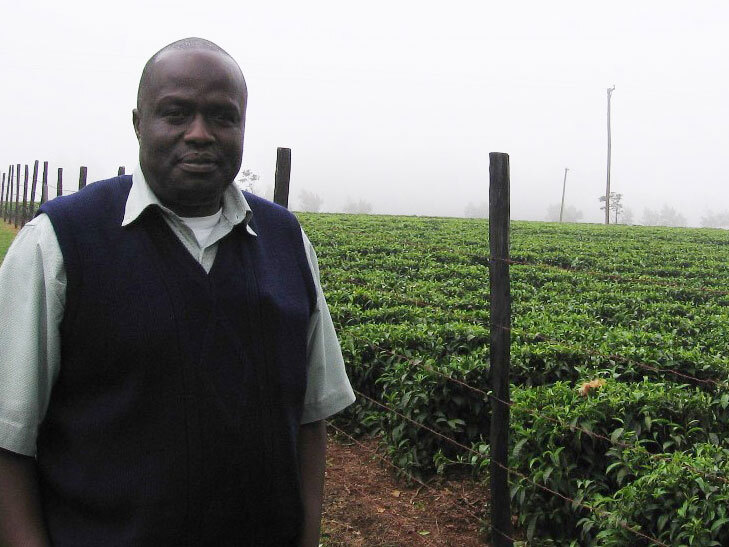 Yusuf Masudi is a manager at Unilever Tea's Mabroukie Estate in Limuru, Kenya. Mabroukie is one of Kenya's oldest commercial tea plantations.

In the cool hills high above Nairobi, where the people live among the clouds, there are giant tea trees more than 100 years old. They are the first tea trees ever planted in Kenya, back when the territory was called British East Africa and Edward VII was king.

Today, modern Kenya exports more black tea than any country in the world. By tradition, East African tea sells at auction in the port city of Mombasa — and the Mombasa Tea Auction may be one of the last places on Earth where Old World manners prevail.

At the Mombasa Tea Center, roughly a hundred traders and nearly a dozen brokers come together on Mondays and Tuesdays and, ever so politely, move an enormous amount of black tea around the world. East Africa sells hundreds of millions of tons of tea every year, and lately, the price has been at an all-time high. As the traders in Mombasa say, "Yes, sir!"

"Yes, sir!" is what traders say when they bid on an offering of tea. It's all part of the tea-trading vernacular in this former British territory, where black, white and Indian traders compete for the best of what's around.

The Etiquette Of Auction

The scene unfolds the same way week after week in this cozy, wood-trimmed amphitheater. Everyone sits in assigned seats, and the auctioneer stands at a lectern below. Brewed tea in glistening white mugs and saucers is served promptly at 10 o'clock. The women wear spectacles and comfortable shoes, while men sport Oxford shirts and ties. It's warm in Mombasa, so jackets are implied.

"The system is well understood by everybody," says Michael Chemweno, a tea broker. "You come in. Your cell phone should be off. The only person allowed to talk when the auction is on is the broker and the buyer who is buying."

Chemweno says all the buyers sample the tea weeks in advance so that by auction day, they already know what's brisk, what's bright and what's bad.

"Like if the tea has a problem, a manufacturing fault. Like if it's burnt, or in the process of transport, it could have some water. Or it mixes with grease," he says. "That tea most likely will be rejected. Nobody would bid it."

The really good stuff hits the block on Tuesdays. A trader who wants to raise a bid can simply say, "Up," or he can back away by saying, "Out." Someone who wants to claim the highest bid tells the auctioneer to "Knock it, sir," and then the gavel falls. Afterward, the traders all go back to their offices and dish to the clients. 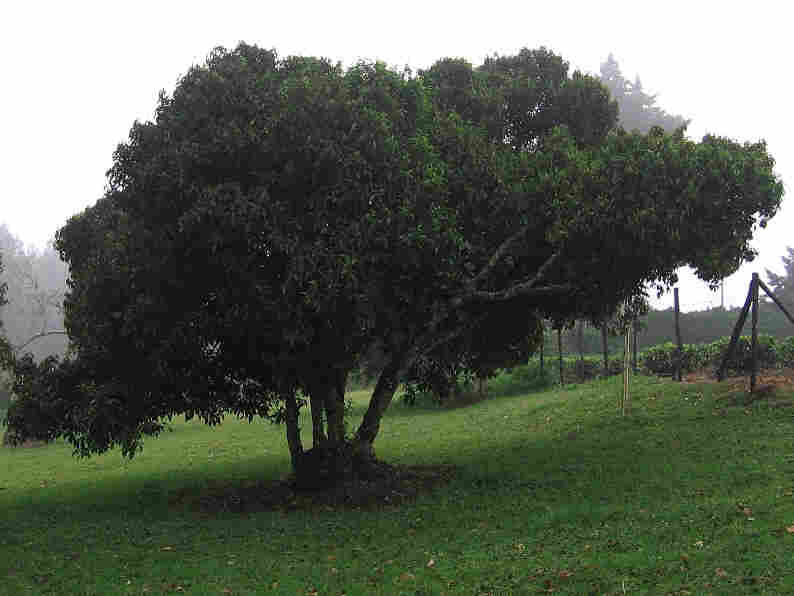 The first tea tree ever planted in Kenya was in 1903. Most commercial tea grows in shrubs or bushes that are pruned to a height between 22 and 48 inches for easy picking. But when left unattended, the plants grow into tea trees. This tree is more than 20 feet tall and stands on the Mabroukie Estate. Gwen Thompkins/NPR hide caption 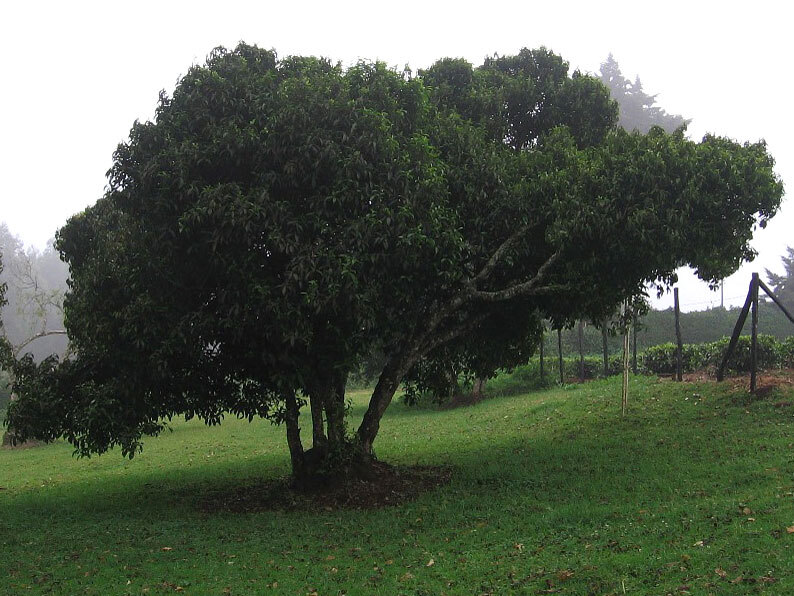 The first tea tree ever planted in Kenya was in 1903. Most commercial tea grows in shrubs or bushes that are pruned to a height between 22 and 48 inches for easy picking. But when left unattended, the plants grow into tea trees. This tree is more than 20 feet tall and stands on the Mabroukie Estate.

Broker Tom Muchura has been at this for nearly 40 years.

"The producer would like to maximize on every production that he makes, but you know the exporter he'll try to buy that tea as cheap as he can," Muchura says. "That competition in the marketplace is what makes the auction interesting. This one is more kinder and a lot more quieter. But there is still competition."

His office is across the street from the auction house. It looks like an old detective agency, someplace where Sam Spade could put his feet up while mulling over the whereabouts of the Maltese Falcon. In the tea business, Muchura says, you've got to keep tabs on anything that can affect sales worldwide: weather, roads, political instability, lifestyle changes.

Once you understand what's happening in the wider world, then the sales at the big auctions in Mombasa, Sri Lanka and India begin to make sense. For instance, Britain has been eclipsed as Mombasa's top buyer by Egypt and Pakistan, where people still take time to brew tea the old-fashioned way.

"These are very much Muslim countries," Muchura says, adding, "Because they stay away from other beverages, I believe that's why they have continued to drink more tea."

Companies blend the teas they buy at auction according to elaborate recipes. Indian teas provide heft, Sri Lankan teas bring flavor, and African teas bring color and strength. But the only way to know that is by tasting manufactured tea in its purest grades — and that means high-volume slurping.

Muchura's taste buds are highly refined. In his tasting room is a line of no fewer than 75 cups of different teas in different grades. Muchura, dressed in a white chef's apron over understated blue trousers and a beautifully laundered Oxford shirt, has the look of Old Money, but he's kicking around the biggest spittoon you ever saw.

"The concept of tasting is you're breathing it in, so you smell it through the mouth by sucking it in," he says. "Then you swirl it around your mouth and then you spit it out. But that exercise is not very attractive."

The Leaf Versus The Bean

Aside from the taste, Muchura also takes note of what the tea looks like in a white cup: an orange hue is good, but a greenish one is not. Then he's ready to price the tea against what the same grade from the same grower fetched the week before.

Overall, the quality of Kenyan tea has consistently remained high. And the combination of higher quality and lower yields due to East Africa's drought has helped push the average price of a kilo to an unheard-of $2.70. But Muchura says consumers could probably pay even more, particularly Americans. He says he traveled to the U.S. last year and couldn't believe the amount of coffee his friends and family consumed — or the prices they paid.

East Africa is also a major coffee producer, but Muchura says he wouldn't know about that.

"I've never liked coffee, so I don't drink coffee. It's bitter, very bitter, and very thick in the mouth," Muchura says. "Tea is light and sweet if it's made properly, and you don't need milk, you don't need sugar."

When it's pointed out that many people like to drink their coffee black, he laughs and says, "Yes, that's when it's even worse."