Accessibility links
In New York City, Poverty Defined In New Terms New York City is one of the first places in the country to take into consideration child and health care costs as well as geographic differences when measuring poverty. Backers of New York's method want the federal formula to reflect these real world costs. 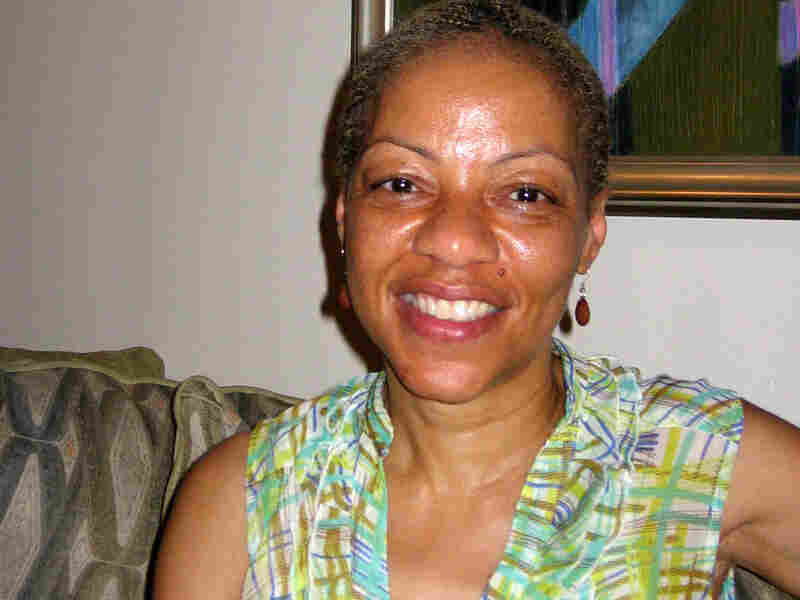 Sandra Killett, who lives in Harlem, earns $29,000 a year — above the poverty line — but she still struggles to make ends meet. She says she isn't doing much better than when she was unemployed and eligible for more government benefits. Pam Fessler/NPR hide caption 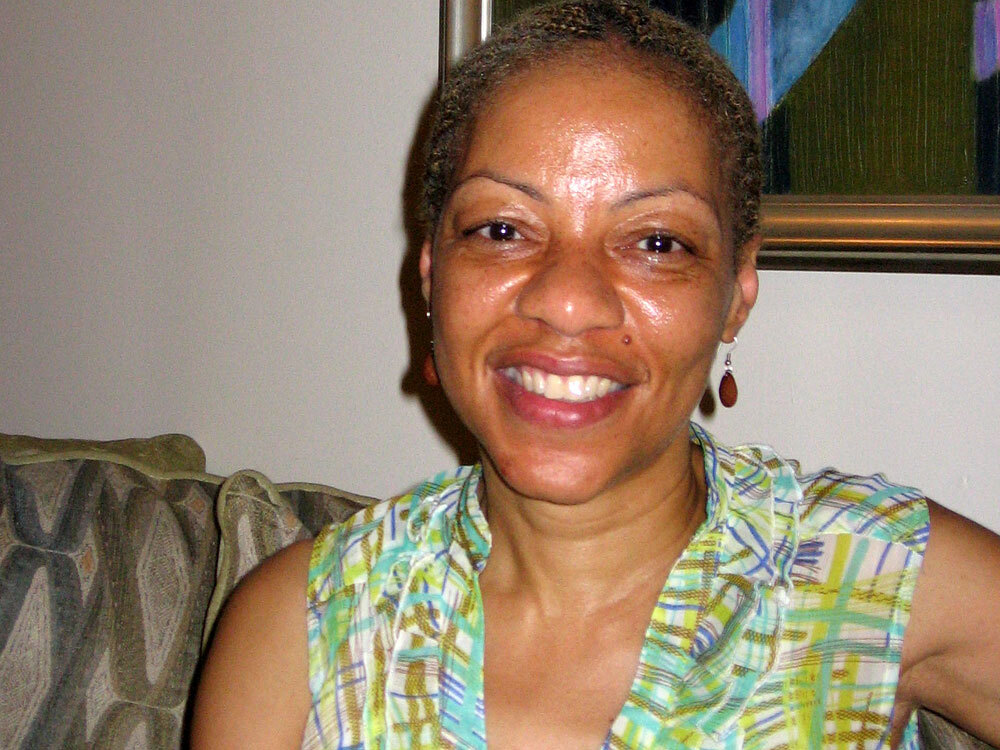 Sandra Killett, who lives in Harlem, earns $29,000 a year — above the poverty line — but she still struggles to make ends meet. She says she isn't doing much better than when she was unemployed and eligible for more government benefits.

New census figures Thursday are expected to show that the poverty rate rose in 2008. But the government still measures poverty the same way it did more than 40 years ago, and many experts think that gives an inaccurate measure of what's going on.

New York City developed a new measure last year based on recommendations by the National Academy of Sciences that takes into account expenses such as child care and health care costs. The result, according to backers of the new formula, is a more realistic picture of today's world. They're pushing the federal government to make a similar change.

Living At The Line

It's not easy to define who is or isn't poor.

Take Sandra Killett, a divorced mother of two, who lives in Harlem. Killett recently got a job at a foster care and adoption agency. It pays $29,000 a year — which puts her well above the federal poverty line. But Killett — a very upbeat New Yorker — is still struggling.

"When you're in a crisis with your family and you don't have the financial means to resolve that, I call that poverty," says Killett.

In fact, she isn't doing all that much better than when she was unemployed and eligible for more government benefits.

Killett lives in one of the most expensive cities in the world, but the federal poverty measure doesn't take that into account. It's the same whether you live in New York or North Dakota.

Killett isn't considered poor by federal standards, in part, because the poverty line was created back in the 1960s. At the time, Americans spent about a third of their income on food. So the government simply took the cost of a basic food plan and multiplied it by three. Since then, the poverty line has been adjusted for inflation, but that's it — even though Americans today spend far less of their income on food, and far more on other things, such as health care.

Gibbs says the "aha" moment came when the city found a new way to help low-income residents take advantage of something called the earned income tax credit — a significant benefit for the poor.

Gibbs says Mayor Michael Bloomberg was excited at the prospect of using the tax credit and asked Gibbs how much the change would reduce poverty in New York.

"And I had to say, well, not at all," says Gibbs. That's because the earned income tax credit is not included as income in the federal poverty measure.

The official poverty rate only looks at income before taxes.

So New York City decided to do what many experts are pushing the federal government to do — change the way it measures poverty to better reflect today's world.

Killett uses her cell phone to keep track of her 16- and 14-year-old sons. For her, a cell phone is a necessity. And New York agrees. It includes the cost of phones, as well as other utilities, in calculating its poverty line. It also includes basic housing, food and clothing costs.

It compares that amount to a family's after-tax income, plus the value of any government benefits such as food stamps or housing. Killett lives in a two-bedroom apartment where her rent is subsidized. She pays $600 a month, but the going rate is more than twice that amount.

Then, the city subtracts medical costs in calculating poverty. Killett checks her records to see how much is taken from her paycheck for premiums: almost $7,000 a year, in addition to other out-of-pocket health expenses.

Killett doesn't pay to commute — she walks to work — but commuting and other work-related costs are also taken into account in New York's poverty measure.

That makes a lot of sense to Antonia Santiago, a single mother of three. Santiago drives between her Manhattan job and her Brooklyn home. The commute takes a slice out of her paycheck.

Santiago drives because her children get free day care right near her job. She used to pay more than $150 a week for child care. And child care is another expense New York looks at in determining poverty. Santiago's $36,000 salary puts her well above the federal poverty line of $22,000 for a family of four. Still, she just filed for bankruptcy, so she doesn't understand why she isn't considered poor. [Story continues after chart]

A Tale Of Two Poverty Measures

New York's formula results in a higher poverty line than the Census Bureau's formula — usually by at least a few thousand dollars.

Because New York's alternative measure is based on 2006 data, it is difficult to compare poverty thresholds for New York City to the latest federal numbers. 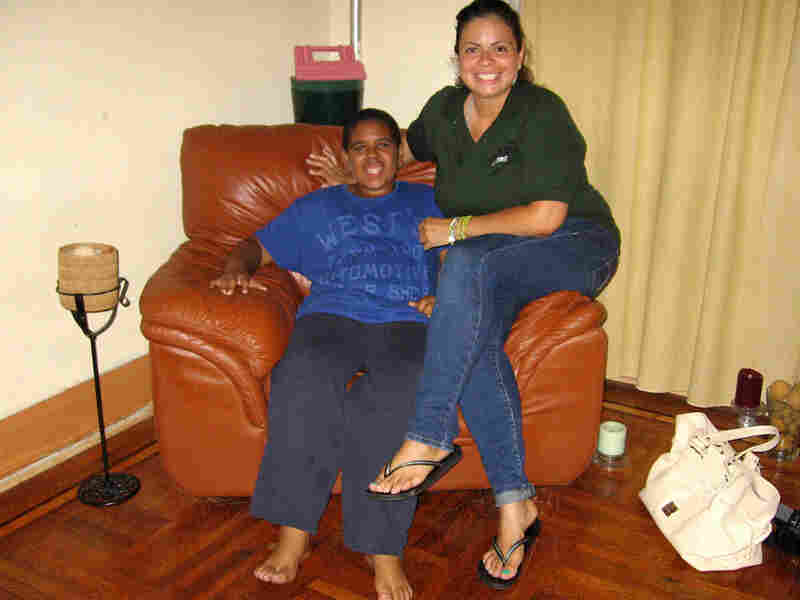 Antonia Santiago and her son, Maddy, in their Brooklyn, N.Y., home. Santiago's $36,000 salary puts her well above the federal poverty line even though she considers herself poor. Pam Fessler/NPR hide caption 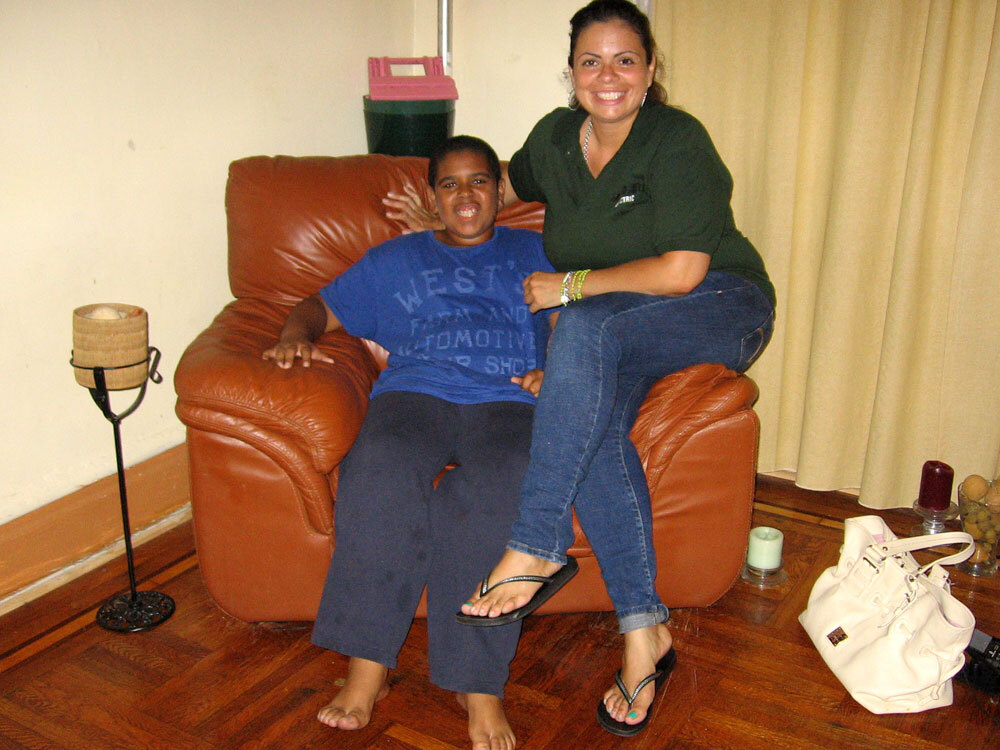 Antonia Santiago and her son, Maddy, in their Brooklyn, N.Y., home. Santiago's $36,000 salary puts her well above the federal poverty line even though she considers herself poor.

Santiago and her children, ages 7, 10 and 16, share a two-bedroom apartment in what she says is not the "nicest area" of Brooklyn.

The building's elevator smells faintly of urine, and her apartment is dark and sparsely furnished. But paying just $800 a month in rent helps Santiago to make ends meet.

"I consider myself to be poor, because once I pay rent, then I come home, I have to pay bills. I mean, I don't have the little luxury amenities, as far as like washer-dryer. Even though it sounds minor, it all adds up," Santiago says.

Rebecca Blank, undersecretary for economic affairs at the Commerce Department, which produces the federal poverty rate, admits that the measure answers only a limited set of questions. For example, she says the figures show how job-related income fluctuates — important in a recession.

"What this won't show you, which is quite important, is the extent to which federal programs might buffer the loss of cash income. So some people who lose their jobs are going to get more food-stamp income. Some of them are going to be able to claim more earned income tax credit income," Blank says.

Blank says her agency is trying to find better ways to analyze how those programs affect poverty, and the Census Bureau does produce some alternative poverty figures used primarily by researchers. But Blank doesn't expect the official measure to go away soon. It's used to determine eligibility for programs, such as Medicaid. And changing it is not only complicated, but political. There are bound to be winners and losers. New York's alternative, for example, produced a lower poverty rate for single-parent families with children, who generally receive more government benefits, and a higher rate for the elderly, who tend to have high medical expenses.

"There's a big constituency now for inertia on this thing," says Nicholas Eberstadt, a researcher at the American Enterprise Institute.

Eberstadt says everyone wants to know how changing the formula affects them. As a result, most of the proposals to update the measure, at least initially, would not affect eligibility for programs but would be used instead — as in New York — to help shape policy. There are bills in Congress calling for an updated poverty measure, and the Obama administration has expressed some interest in making a change. Eberstadt, who says the measure would be more accurate if it focused on consumption rather than income, thinks something needs to be done soon.

"I'm very worried that our existing poverty rate is a broken compass, and it's just going to misguide us — and now, of all times, while we're in the middle of a big global economic crisis. We need to have good instrumentation to inform us about who's in need," Eberstadt says.

"I'm so confused about what's poor and what's not poor," Killett says. "And I have to keep going back and saying, 'If you knew your basics were covered, maybe I wouldn't consider myself to be poor.' "

But she knows that for her, and many others, they're not covered — no matter what the official numbers say.