Accessibility links
He'll Help You Find Your Flight, And God As the full-time chaplain of Hartsfield-Jackson Atlanta International Airport, Chester Cook spends his days assisting stranded travelers, counseling those having emotional meltdowns and calming down stressed-out soldiers. And he often pays travelers' $150 change fee from his chaplain's budget — or his own wallet. 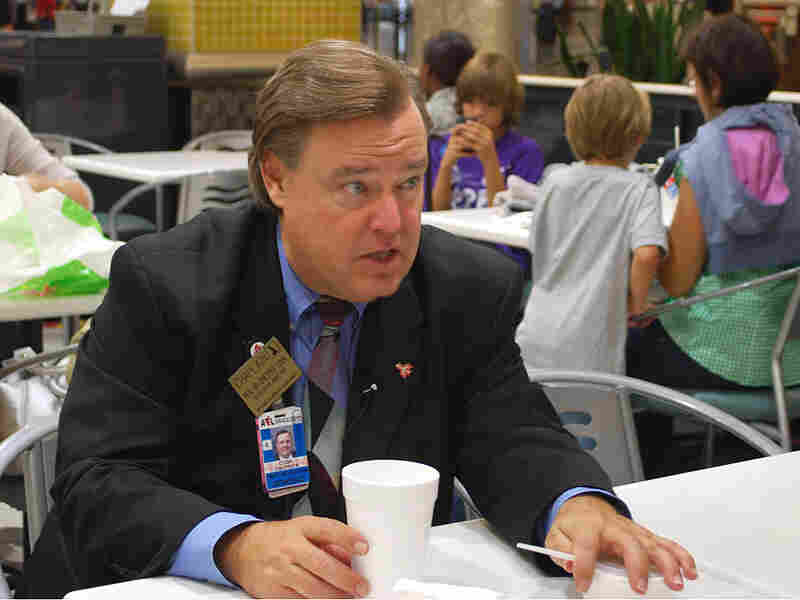 The Rev. Chester Cook, the chaplain at Hartsfield-Jackson Atlanta International Airport, counsels a woman who has been stranded at the airport. Barbara Bradley Hagerty/NPR hide caption 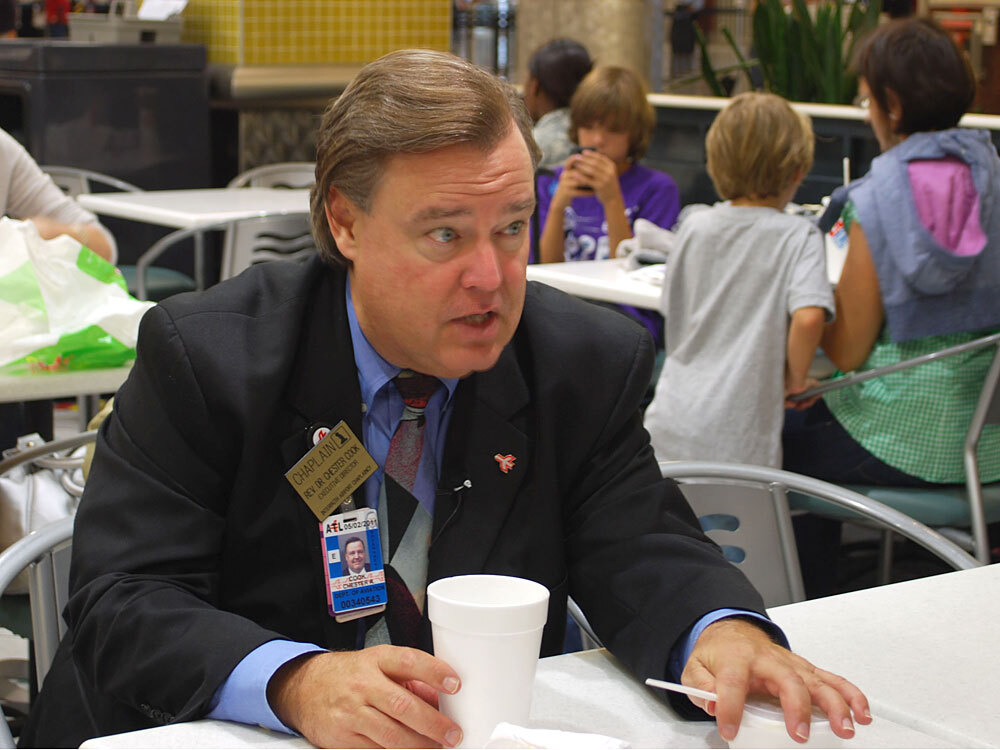 The Rev. Chester Cook, the chaplain at Hartsfield-Jackson Atlanta International Airport, counsels a woman who has been stranded at the airport.

Chester Cook knows he can always find a lost soul at the re-ticketing counter in Terminal A at Hartsfield-Jackson Atlanta International Airport. So he goes there each day, plants himself near the line and scans faces.

"I'm normally looking for someone who's having a meltdown," Cook says.

Soon enough, he spots a woman. She's near tears, looks to be in her 60s and is lugging a heavy bag. Cook approaches her.

"OK, I'm going to go check it out with you," he says as he hails down a motorized cart and helps her on. "I'm going to ride with you back here, OK?"

Largest Church In The Country

By some definitions, Cook has the largest church in the country. As the full-time chaplain of Atlanta's international airport, his flock includes the 56,000 employees and a quarter of a million travelers who pass through each day.

The United Methodist minister models his ministry on the parable of the good Samaritan — a stranger who helps a traveler in crisis and practices kindness, often without mentioning religion. Cook says he gets a lot of practice in these days of inflexible airline rules. He often pays a traveler's $150 change fee from his chaplain's budget or his own wallet. And sometimes he manages to bend the rules.

On a walk back toward the airport's chapel, Cook recalls the time he found an elderly woman stranded in the airport. She wasn't supposed to fly out for three days, and the airline wouldn't change her ticket. So Cook confronted an airline manager.

"I said, 'This is a dilemma, because if that was your 81-year-old grandmother sitting out there, you would be fit to be tied,' " Cook says. "And I said, 'I'm sure the news channels would love this story if I gave them a phone call.' "

The woman was put on the next flight.

'One Emergency After Another'

These are the easy fixes, Cook says. The harder ones involve the runaways, the abused women and the people who end up at the airport with nowhere else to go.

"It's literally the last stop," he says. "And then they end up in the atrium, which is right out front of our chapel. And they don't really know what to do next. They don't know where to turn."

Dale Campbell is one of those people. He and his wife turned up at the chapel three weeks ago. They fled the Virgin Islands after some burglars broke into their hotel room, shot Campbell in the foot and took everything they owned.

"So we hit Atlanta with nada, nothing," Campbell says. "That's when we met Chester, and he saved us."

The chaplain found them shelter, food and spending money. He invited Campbell to use the office phone and computer to look for a job. Campbell says he's had plenty of company.

"You know there are stories every day that walk through the door. I've been there and seen them," Campbell says, laughing. "It's one emergency after another. It's like an ER room."

Cook seems embarrassed by the praise. He changes the subject.

The two men decide on Chinese — Cook is paying — but first the chaplain peeks into the chapel. It's an interfaith chapel: There is an altar with flowers, but no cross or other religious symbol. A Muslim man is on his knees, facing east. A woman sits in the corner. Cook walks over to her.

"Excuse me," he says. "I noticed you were here this morning."

The woman is in her 40s, rail thin and fidgeting anxiously. She whispers that she came from downtown to meet someone who never showed up. She's run out of money and can't leave the airport. Cook says he'll buy her a transit card for a week. At this small gesture, she begins to cry.

"I'm so embarrassed," she whispers.

"Aw, we do this all the time, darling," he says, resting his hand on her shoulder. "I'm sorry you're going through this."

The woman begins to weep. "You're OK here," he says softly. "We're gonna get you something to eat. That'll help you feel better. You won't feel so stressed, OK. OK?"

She nods. In between deep breaths, the woman confesses she often feels like running away from God.

"He doesn't want you to get away from him," Cook says. "He wants to live life with you. God says, like the prodigal son, 'I've been waiting for you with open arms. Come on home.' "

Theology on the run and expedited prayers — that's typically all that Cook has time for. And it's not just for distressed travelers, but also for the tens of thousands of flight attendants, baggage handlers, cashiers and others who work at the airport. Cook has 40 part-time chaplains who help him serve this huge operation, and they often specialize: Former pilots minister to pilots, retired military tend to the soldiers.

Each day, hundreds of soldiers and Marines pass through this airport going to or from Afghanistan and Iraq. It's a sea of tan and green. These people have a very different set of spiritual needs. Cook says he's seen a sharp surge in anxiety in the past year — not about fighting, but about the toll that repeated deployments take on their families.

"It's tough to have a newborn and then have to leave," he says. "Or to have a boy just starting T-ball and you have leave. And the wives, who said, 'I married you to have a life with you, and now I've had 10 years of separation.' There's no answer."

Just a week ago, Cook says, a soldier walked into the chapel, which is only a few yards from the USO.

"And he said he was on the third floor and he was going to throw himself off. And I talked to him, and he said, 'Everything I live for is gone now. My wife has left me, I can't be with my children, I'm on my third deployment, and I've only got two years left — so I don't have a lot of options,' " Cook says.

For a few moments, Cook talked to the soldier about what he had to live for. He thinks the man left with a bit more hope, but he'll never know.

When Cook chats with the military personnel at the ticketing line on this day, the stories he hears are happier.

"Are these guys going back?" he asks a man in fatigues.

At the end of his day, the Rev. Cook stands in front of the chapel, looking down at the people swarming in the atrium below. He admits that at times their problems seem overwhelming.

"Your heart goes out, and sometimes you can't do anything," he says, adding that it's tough leaving people at the end of the day, knowing their problems will still be there tomorrow. "It's not always a quick fix. It's not always a little solution."

But Cook will go home and recharge. And the next morning, he'll return ready to help one or two or 10 souls of the thousands who pass through the airport each day.