Accessibility links
Supreme Court Hears Campaign Finance Case The Supreme Court heard a second round of arguments Wednesday in a case that could transform American politics. The court could reverse decades of its own decisions that have blocked corporate spending on federal candidate elections.

The Supreme Court heard a second round of arguments Wednesday in a case that could transform American politics. The court could reverse decades of its own decisions that have blocked corporate spending on federal candidate elections.

And we're going to hear responses from the public and members of Congress throughout the rest of this morning's program. Now, some of the same lawmakers who watched the president also took time for another show yesterday. Across the street from the U.S. capital, the nine justices of the Supreme Court heard arguments. The case drew lawmaker's interest because it could transform American politics.

Yesterday, there appeared to be five conservative justices on the verge of saying the ban is unconstitutional. If so, that would dramatically change campaign finance law as practiced since 1907 when Congress, for all practical purposes, first outlawed corporate spending in candidate elections.

Leading the challenge to the ban yesterday was former Solicitor General Ted Olson. He faced immediate questions from Justice Ruth Bader Ginsburg, who asked whether corporations have this same constitutional protections as individuals. After all, she observed, corporations are not endowed by their creator with inalienable rights. Ted Olson.

Mr. TED OLSON (Former Solicitor General): What the court has said in the first amendment context is that corporations are persons entitled to protection under the First Amendment. Now it…

Justice RUTH BADER GINSBERG (U.S. Supreme Court): Does that - would that include today's mega-corporations, where many of the investors may be foreign individuals or entities?

Mr. OLSON: The court in the past has made no distinction…

New Justice Sonia Sotomayor seemed to search for a way to rule narrowly and to defer to Congress. Congress and the state, she noted, have worked for more than a century to achieve a balance between free speech and the need to prevent corporate and union campaign spending from corrupting government decision making.

Justice ANTONIN SCALIA (U.S. Supreme Court): …think that Congress has a self-interest. I doubt that one can expect a body of incumbents to draw election restrictions that do not favor incumbents. Now is that excessively cynical of me? I don't think so.

Ms. ELENA KAGAN (Solicitor General): I think Justice Scalia is wrong. In fact, corporate and union money go overwhelming to incumbents. This may be the single-most self-denying thing that Congress has ever done.

TOTENBERG: Prodded by Chief Justice John Roberts, Kagan said repeatedly that Congress was justified in banning corporate spending in candidate elections because corporate money is other people's money. It is the shareholders' money, and they have no say in how it's being spent in campaigns.

Justice JOHN ROBERTS (U.S. Supreme Court Chief): The idea - and as I understand, the rationale is we the government, Big Brother, has to protect shareholders from themselves. They might give money, they might buy shares in a corporation, and they don't know that the corporation is taking out radio ads.

TOTENBERG: A decision in the case is expected before the end of the year. 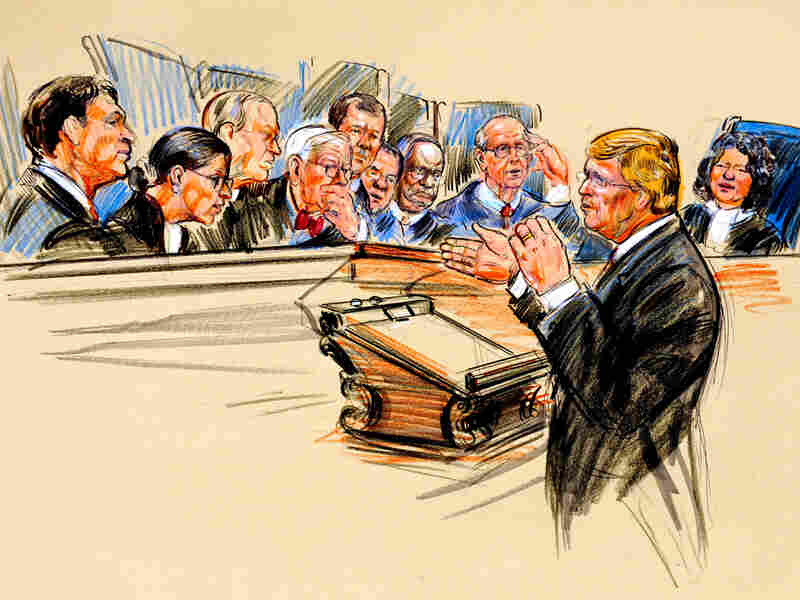 This artist rendering shows Ted Olson, the attorney representing the group behind a movie critique of Hillary Clinton, arguing a campaign finance case before the Supreme Court in Washington on Wednesday. The court's newest member, Justice Sonia Sotomayor, is depicted on the far right. Dana Verkouteran/AP hide caption 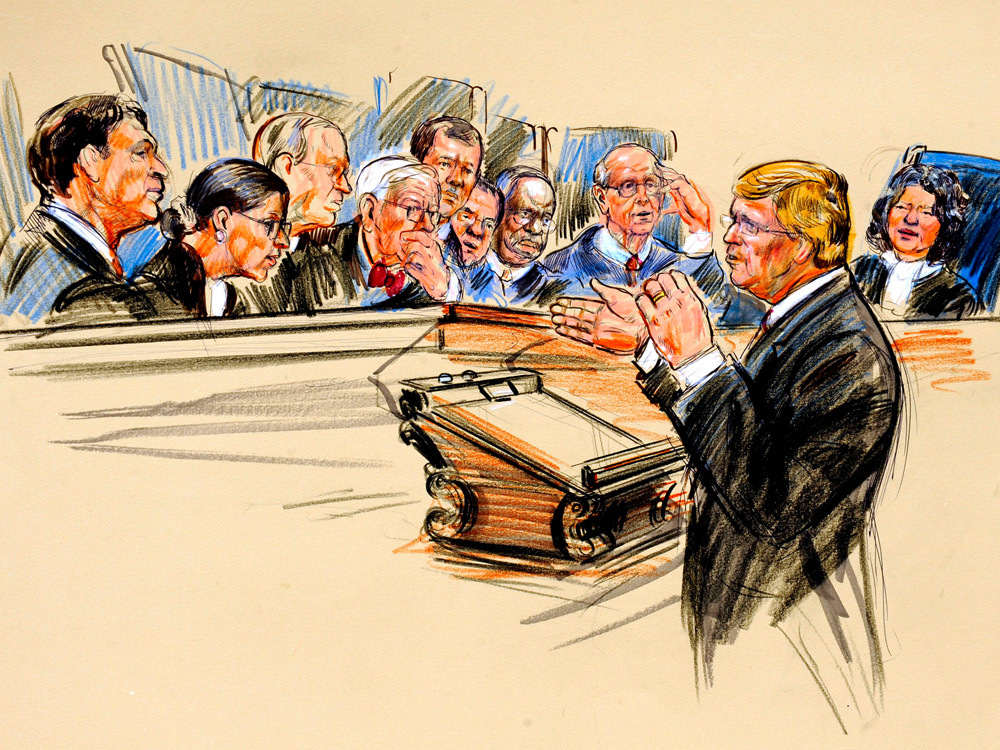 This artist rendering shows Ted Olson, the attorney representing the group behind a movie critique of Hillary Clinton, arguing a campaign finance case before the Supreme Court in Washington on Wednesday. The court's newest member, Justice Sonia Sotomayor, is depicted on the far right.

Not waiting for the first Monday in October, the Supreme Court returned Wednesday for arguments in a case that could transform American politics. In its ruling, the court could reverse decades of its own decisions that have blocked corporate spending on federal candidate elections.

Wednesday's case involves a scorching 90-minute movie critique of Hillary Clinton, produced by a group that wanted to run it on cable TV during the 2008 presidential primary season. The film portrayed Clinton as intolerant, vindictive and sneaky.

The Federal Election Commission and a lower court ruled that the movie would amount to a political ad, and because it was paid for in part with corporate money, federal law banned it from broadcast just before the primary elections.

The court first heard arguments in the case on narrow grounds during the last term, but then ordered a second round of arguments focused on whether Congress may strictly limit corporate money in federal elections, as it has for more than 100 years.

Leading off the argument was former Solicitor General Ted Olson, who said corporations have the right to free speech during elections, just as individuals do.

He faced a skeptical Justice Ruth Bader Ginsburg, who asked whether corporate rights aren't different from those of an individual. "A corporation," she said, "is not endowed by its creator with inalienable rights."

Ginsburg noted that corporations are free to spend money on elections through political action committees that collect individual contributions for campaigns. Olson rejected that as a solution, saying it turns corporations into ventriloquists.

When Olson argued that Congress must have a compelling reason to limit corporate speech, Justice Stephen Breyer said the compelling argument is that "people think representatives are being bought."

Breyer got Olson to concede that if corporations win the right to spend unlimited and undisclosed amounts in campaigns, they will be able to spend far more than the political parties are allowed to under federal law. In short, Breyer said, the court will have made a hash of the McCain-Feingold campaign reform law passed in 2002 and upheld by the Supreme Court a year later.

New Justice Sonia Sotomayor focused her questions on congressional versus court power, noting that Congress and the states have sought to achieve a balance between allowing free speech and curbing the potential for corruption in campaign spending.

Also making her Supreme Court debut Wednesday was new Solicitor General Elena Kagan. She said for more than 100 years, Congress has judged that corporations have to be covered by special rules in federal campaign spending. She said the Supreme Court never questioned that judgment.

"We never questioned it, but we never approved it, either," protested Justice Antonin Scalia.

Kagan replied that "faced with many opportunities to do so ... [this court] left standing the legislation that is at issue in this case."

But the court's most conservative members seemed to give her cause for pessimism. She offered a narrow ground on which they could rule against her, saying that's how the government would prefer to lose "if it has to lose."

Justice Anthony Kennedy said Congress is seeking to silence corporate expertise. Justice Samuel Alito observed that half the states allow corporate spending in candidate elections, and they have not been overwhelmed by corporate corruption. And Scalia contended that Congress wrote the law to benefit its own incumbents.

A decision in the case is expected later in the court term.