Accessibility links
Patrols On Porous Iraqi Borders Yield Limited Success Iraq's security forces are trying to expand their presence along the desert borders with neighboring states. Caches of weapons and explosives are being unearthed, and military officials believe a few favorite smuggling routes have been disrupted. But significant challenges remain. 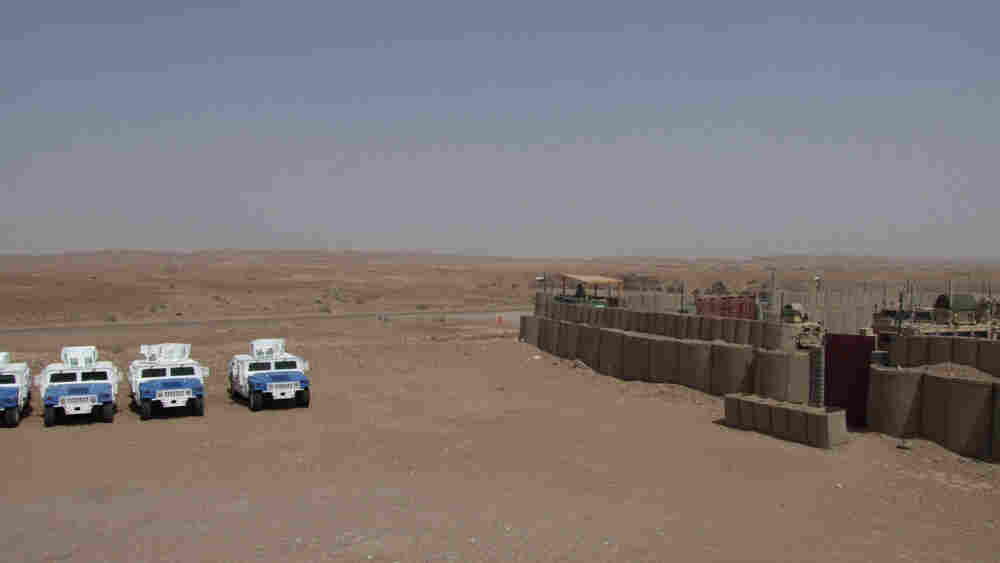 Iraqi Humvees ready for patrol sit next to a U.S. military base where advisers and trainers live roughly 400 yards from Iraq's border with Iran, northeast of the city of Amara in Maysan province. Peter Kenyon/NPR hide caption 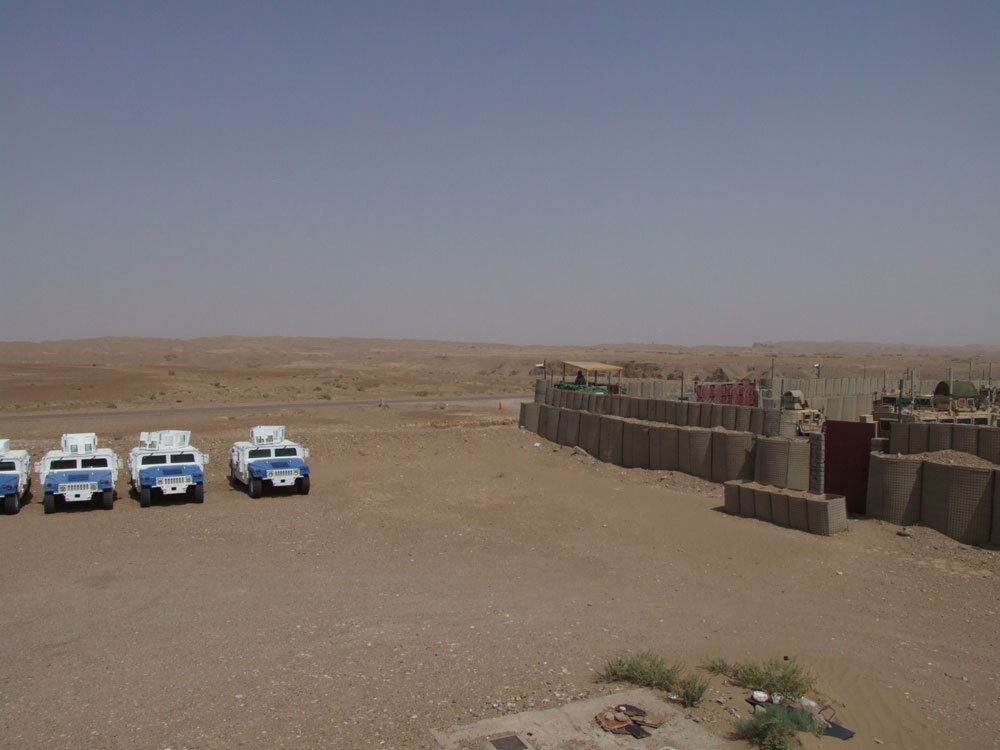 Iraqi Humvees ready for patrol sit next to a U.S. military base where advisers and trainers live roughly 400 yards from Iraq's border with Iran, northeast of the city of Amara in Maysan province.

Amid a recent rash of bombings and attacks throughout Iraq, the country's security forces are trying to expand their presence along the vast porous desert borders with Syria, Iran and other neighboring states.

Caches of weapons and explosives are being unearthed, and military officials believe a few favorite smuggling routes have been disrupted. But significant challenges remain.

Under the new U.S.-Iraqi security arrangements, border enforcement is now primarily the job of Iraqi forces — with training and support provided by American troops. It's a new approach to an effort that began five years ago. And the first thing a visitor to the desert near the Iranian border in southeastern Iraq's Maysan province notices is that this time, things actually seem to be working.

In the fall of 2004, the U.S. military invited NPR and other media in Baghdad on a border tour. The Marine colonel who led the trip was surprised and irritated to find reporters along, and it soon became clear why. The border forts visited on the trip were severely under-equipped, and manned by depressed and frustrated Iraqi soldiers.

One border guard, who didn't give his name for fear of retribution, waited until the officers were out of earshot before explaining that he and his colleagues had been dumped out in this isolated post without even the most basic tools to carry out their mission.

"A border fort was blown up. How could they fight? They didn't have the weapons they needed. How can they stay there? Shouldn't they be given weapons? A police colonel goes to the front to protect the border, and he has only five bullets in his gun. He has to buy the gas for his truck out of his own pocket. The vehicles have no spare tires," the guard said.

Five years later, border security is still a work in progress. But now the Iraqis have weapons, their own Humvees and, perhaps most important, a track record of successes to boost their morale.

Conditions are still brutal. On a recent morning, the searing summer wind was inescapable as it whipped across the open desert, sanding everything with a fine brown grit. 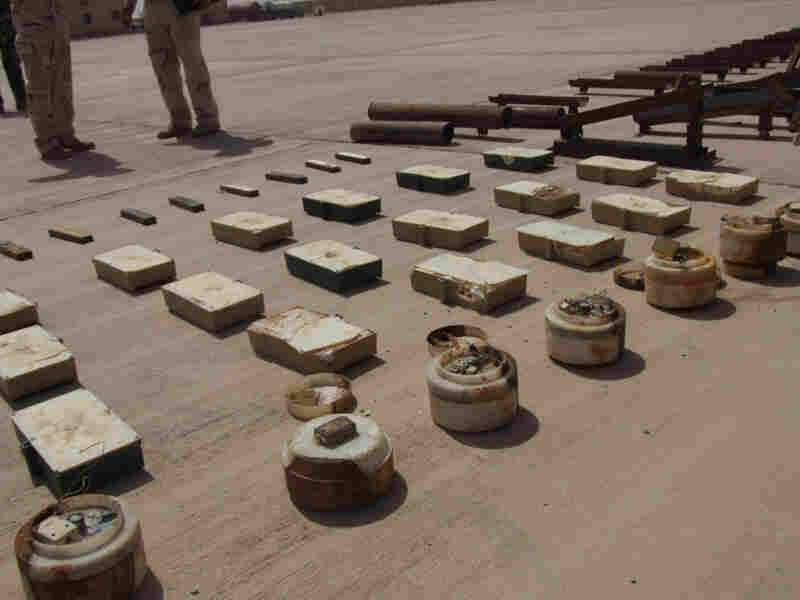 U.S. and Iraqi soldiers display "sticky IEDs" — magnetic bombs that militants attach to vehicles — found during a raid at a checkpoint near the Iraq-Iran border. Peter Kenyon/NPR hide caption 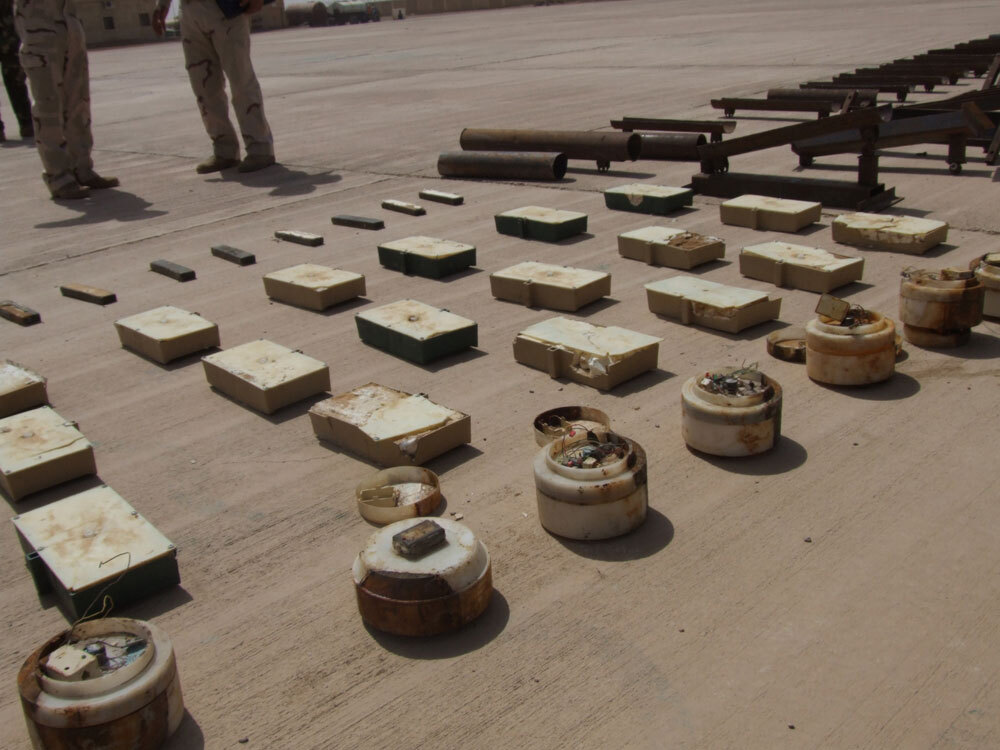 U.S. and Iraqi soldiers display "sticky IEDs" — magnetic bombs that militants attach to vehicles — found during a raid at a checkpoint near the Iraq-Iran border.

At a camp in Maysan province outside the city of Amara, Iraqi Maj. Gen. Habib Moussa presided over a display of weapons discovered in recent raids.

There are machine guns, "sticky IEDs" — the magnetic bombs that continue to do so much damage to Iraqi soldiers and civilians across the country — a huge 240-millimeter rocket, and a large number of car jacks with Iranian Farsi script on the side. The general explains that a local tip the previous day led them to a small factory where these jacks were cleverly welded into rails for launching rockets.

"These jacks look like a simple tool for raising up your car, but they are easily turned into something useful in an attack. They take two pieces of metal ... and they just weld it together and add a base, and it becomes a rail to fire a rocket from," Moussa explains.

At another military base — an Iraqi fort, some 400 yards from the border with Iran — soldiers have a clear view of a dry riverbed that they believe has been a favorite smuggling route.

Col. Peter Newell, commander of the U.S. Army's 1st Armored Division's 4th Brigade, says that once the Iraqi team at this fort was trained and operating, it immediately began uncovering sizeable and deadly caches — recently made bombs and weapons that he says were clearly destined for use in Baghdad or other cities. But in recent weeks, those finds have dried up, suggesting that the smugglers have shifted to another route.

"What [the Iraqis] think and what we think is that most of the guys who were importing [explosives and weapons] here have either gone to ground or have moved. The Iraqi army and Iraqi police have reduced so many of these things and detained so many guys that it's just not a popular place to smuggle right now," Newell says.

But keeping the smugglers away is another matter.

As with many Iraqi bases, there are still shortages of gasoline and supplies, and these men are being asked to cover huge chunks of territory. Newell says they are still struggling to come to grips with the massive Arab marshes just to the south.

"The border forts are still too far apart. The border enforcement brigade is still at 60 percent capacity, under-equipped," he says. "There's a huge swamp out here, and until you've flown over it and seen it, you just can't appreciate the magnitude."

Newell says the Iraqis need what he calls a "swamp cop" unit dedicated to the marshes, which are a world unto themselves where smuggling has long been a way of life. And with a severe drought forcing marsh fishermen and farmers out of business these days, smuggling is becoming more and more attractive. Making a new, more comprehensive attempt to tackle smuggling in the marshes may be the next phase of Iraq's effort to gain a semblance of control over its borders.