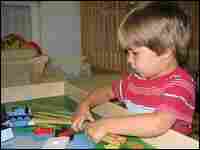 James Davern, 3, plays with his Thomas the Tank Engine toys. He says his favorite is the little engine named James, one of the recalled items. David Schaper, NPR hide caption 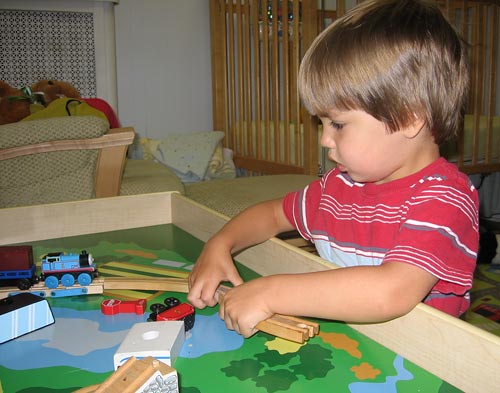 James Davern, 3, plays with his Thomas the Tank Engine toys. He says his favorite is the little engine named James, one of the recalled items.

More on the Recall 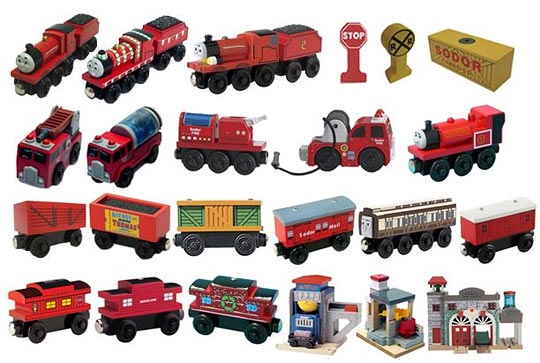 Thomas the Tank Engine toys affected by the recall.

A suburban Chicago-based toy company is reeling from the recall of one of its most popular products — Thomas the Tank Engine. The company, RC2, voluntarily began recalling some of the popular wooden railway toys because the Chinese factory that makes them used lead paints on the toys.

Parents are outraged, not just about the possibility of lead poisoning, but many are frustrated with the way the company has been handling the problem.

To say that 3-year-old James Davern loves his Thomas the Tank Engine toys is an understatement.

"For his first two years, he didn't play with anything but trains," says his mother, Heather Davern. "These are the kinds of things he takes to bed with him. He puts them in his pocket and he takes them to the store, he takes them in the car — everywhere."

As he rifles through his toy box in search of his favorite "Thomas and Friends" toys, James describes each one he pulls out.

"Oooh, this is so cool, see this? That's an octopus in that train."

He says his favorite isn't Thomas, or Percy, or any of the more popular characters, but his namesake.

The Chicago family's home is full of Thomas trains, track and other products. Heather Davern says they've "spent hundreds of dollars on this stuff" since 5-year-old Addie was 1, and some will soon be passed onto the baby, 1-year-old, Ian; but not all the toys. Big sister Addie explains:

"We have to get rid of this one," she says holding a James coal car she pulled out of the toy box," because it has dangerous paint on it."

The Oak Brook, Ill.-based toy company RC2 last week issued a voluntary recall of some 1.5 million "Thomas and Friends" wooden toys because the factory in China that the company contracts with to manufacture the toys used lead in some of the red and yellow paints coating the toys between January 2005 and April 2007.

That upsets Heather Davern because she says her kids play with these toys constantly.

James was just tested for lead in March as part of a preschool screening and the results came back normal. Addie has been tested before and will be tested again this summer before entering kindergarten, but even good results don't quell Davern's concerns.

"You think that when you're buying a high-end toy like a Thomas the Tank Engine train, that you're getting something that has gone through all the proper channels to make sure it's a safe toy," she says.

If lead paint can get into Thomas trains, Davern says, it can happen with any toy.

"That's the scariest thing, because now it makes me want to go out and test all their toys because ... I don't trust any of them," she adds.

Davern calls it archaic to have to worry about lead paint in toys nowadays, but the Consumer Product Safety Commission says that is just one of several problems tied to the booming increase of manufactured products coming into the United States from China.

And just as troubling to some is the response of the corporations involved. Toy company RC2 issued a press release explaining the recall last week and since then, has refused all interview requests and this week, only issued a brief statement that says the company's own thorough investigation identified the lead paint, and that it "has implemented a corrective action plan."

No one from RC2 was available to answer why it took nearly two and a half years to discover the lead paint, and what the corrective action plan entails.

HIT Entertainment, the British media company that owns the Thomas name and licensed it to RC2 to make its toys, at first only referred the media to RC2. But late Thursday HIT Entertainment added its own brief statement saying, "We appreciate and understand the concerns of our customers who are affected by RC2's voluntary recall of select items from the Thomas Wooden Railway system. We are working closely with them to ensure that consumers are informed and advised, and that all the affected products are recalled swiftly."

"That's probably the most shocking thing about this story to date," says Tim Calkins, professor of marketing at Northwestern University's Kellogg School of Management. He says a sluggish response goes against the conventional wisdom in crisis management.

"Historically, if you are straight with consumers and you say, 'Yes, we've had a slip-up and here's what we're doing to fix it,' often the brands get through crises," he says.

Calkins says that to not communicate more could be dangerous because consumers will now be linking a brand that had a purity about it and was associated with learning and positive child development with something very harmful to child development.