Accessibility links
Wilson's Outburst A Boost For Obama, For Now GOP Rep. Joe Wilson's "you lie!" outburst has provided President Obama an unexpected boost in his push for a health care overhaul — and sent the GOP scrambling to get back on message. Some hope it will lead to more restraint in the health care debate, at least for a little while.

Wilson's Outburst A Boost For Obama, For Now

Wilson's Outburst A Boost For Obama, For Now 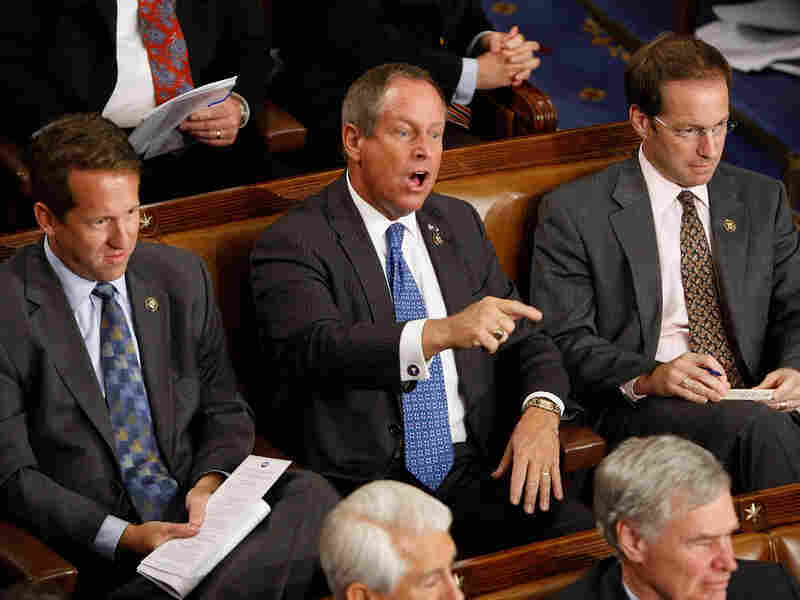 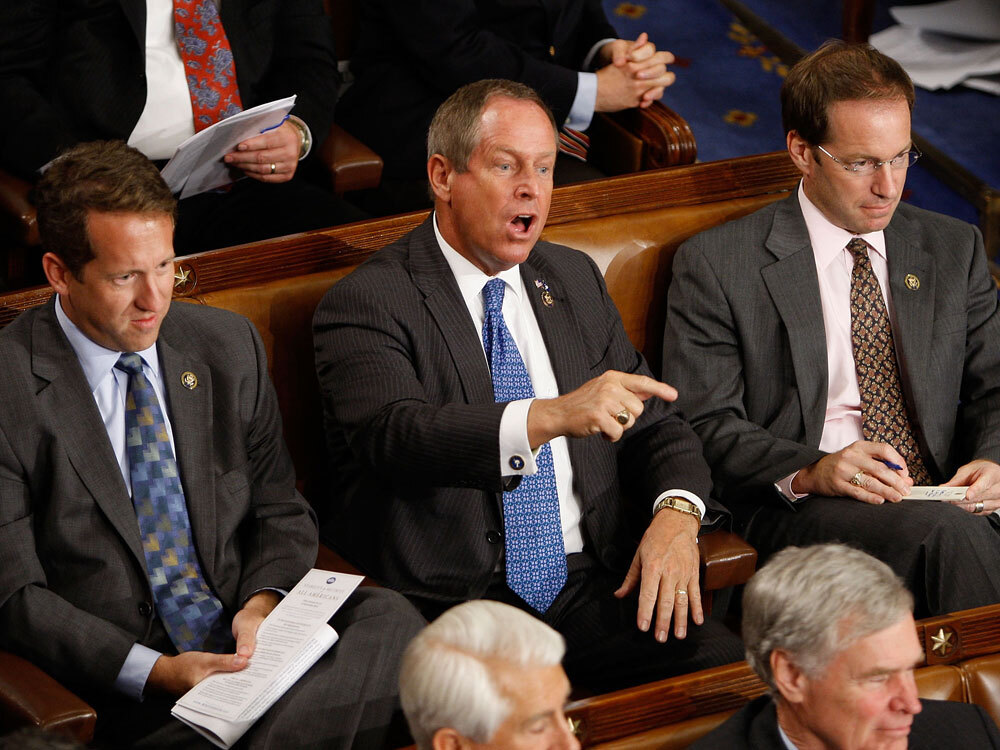 Republican Rep. Joe Wilson of South Carolina has apologized for yelling "you lie!" at President Obama during his health care speech to a joint session of Congress Wednesday night.

And House Speaker Nancy Pelosi, whose face was a study in shock after Wilson's singular outburst, has resisted calls for Wilson to be censured, though she pointedly called his shout out an example of his party's "bankruptcy" of ideas.

So, case closed on Wilson's "I let my emotions get the best of me" incident?

Hardly. Especially not after a summer during which many of Congress' members saw their town hall meetings on health care dominated by louder and coarser versions of Wednesday night's eruption.

Wilson's outburst, in fact, has provided Obama and supporters of his health care overhaul an unexpected boost and prompted some scrambling on the GOP side of the aisle.

Wilson is a four-term congressman who started his political career as an aide to the late Sen. Strom Thurmond.

He won his House seat in a special election in 2001, succeeding the late Rep. Floyd Spence (R-SC).

He is a reliably conservative Republican who, like his predecessor, is deeply involved in defense issues.

Wilson has been accustomed to winning re-election handily in this mostly conservative district. But last year, he was held to just 54 percent of the vote against Rob Miller (D), an Iraq war veteran. Miller is back for a 2010 rematch.

But it has also spurred a round of soul-searching among Capitol Hill watchers and others distressed that the deterioration of political discourse has apparently reached a new low.

"It's one of the unfortunate byproducts of modern politics that even the respect that the president would traditionally receive in an address to Congress has dissipated," says Dan Schnur, a former GOP strategist who directs the Jesse N. Unruh Institute of Politics at the University of Southern California.

"It may be the first time we've reached this particular threshold," he said.

A Nadir In Discourse?

Recently retired Senate Historian Richard Baker, who watched the president's address on television, said he finds the situation "heartbreaking" but not surprising.

Baker served as historian for more than three decades. And he says Wilson's actions — as well as the booing and handmade signs offered up by his Republican colleagues during Obama's speech — were just "a culmination of a very regrettable trend."

Fred Beuttler, deputy historian of the House, said he found Wednesday's development less dramatic than it's been portrayed. "It's not unusual for members of the opposing party to express disagreement audibly," he says.

Members of Congress have booed and jeered recent presidents including Bush and Clinton and have often grumbled loudly with displeasure during joint session speeches, Beuttler says.

So what was different about Wednesday night?

"Usually you have 20 or 30 people expressing similar displeasure" during a president's speech, he says. "The uniqueness of last night was that it was just one person who was identifiable."

Wilson's protocol crime, it seems, may have been that he went it alone — and maybe unwittingly. Beuttler surmises that perhaps the congressman thought he would be joined in his vocal protest, and wasn't.

Briefly Chastened, But Back On Message

Republicans were rallying to get back on message Thursday after a news cycle dominated by Wilson's televised, YouTubed, tweeted and pundit-pondered protocol breach.

Party leaders, having gotten their expressions of regret out of the way, were again taking aim at the cost of Obama's health care overhaul proposals, warning insured Americans that they could lose plans they like and simply calling for the whole thing to be scrapped.

Wilson called his retort "spontaneous" and "regrettable." It could turn out regrettable indeed: Between Wednesday night and Thursday afternoon, more than $405,680 had poured into the campaign coffers of Rob Miller, a Democrat who is expected to challenge Wilson next year, according to the Web site for ActBlue, a political action fund that raises money for Democrats. Helping drive donations to Miller is the liberal Web site Daily Kos, which is featuring a link called, "Don't get mad, get even," which directs readers to ActBlue.

Even thus chastened, Wilson on Thursday returned to the point of his confrontation with the president: whether or not illegal immigrants would be covered under proposed health care plans.

Well, I last night heard from the leadership that they wanted me to contact the White House and state that my statements were inappropriate. I did. I'm very grateful that the White House, in talking with them, they indicated that they appreciated the call and that we needed to have a civil discussion about the health care issues. And I certainly agree with that.

Emerging from a vote, Wilson told reporters that he still believes that bills before Congress include immigrants in the country illegally — a claim that has been repeatedly debunked — and that "we should not be providing full health care services" to undocumented immigrants.

Strategists were puzzling out just how much of an effect Wilson's comments would have, long term, on the health care debate.

"I think the outburst was the single most helpful thing to the president," says Vin Weber, a former six-term Republican congressman from Minnesota. "He made the president look good, as he should have, and Wilson's paying the price, as he should."

But Weber, now a Washington political strategist, predicted that unless Wilson mishandles the situation in coming days, the effect will be short term. "Some positives for the president, and then we'll get back to where we were," he says.

David Winston, a former aide to then-House Speaker Newt Gingrich, insisted Thursday that the president bears some blame for Wilson's anger. "The tenor of the speech, where Obama stood up and accused Republicans of lying, is equally objectionable," Winston says. "Last night was, from both sides, an example of uncivil discourse."

Though, he added, that Wilson's behavior in the chamber was "not what you want to have."

A Bit More Restraint Ahead?

At a time when polls have been showing that passion lies with opponents of Obama's overhaul proposal, L'Affaire Wilson, now nationally known for better or worse, helped the president in his move to regain traction in the health care debate.

That effect will most likely dissipate in coming days, as Congress bears down on the details of health care legislation. (One bipartisan moment Wednesday night: laughter in the chamber writ large when the president suggested there were still some details to be worked out on the plan.)

I'm a big believer that we all make mistakes. He apologized quickly and without equivocation and I'm appreciative of that.

But the Hill historians were predicting that a more lasting effect may be a resetting not of the policy debate, but of the tenor of the debate on the Hill.

Beuttler recalls that in 2005, new House member Rep. Jean Schmidt, a Republican from Ohio, caused a firestorm when she obliquely referred to Democratic Rep. John Murtha of Pennsylvania as a coward. Her remarks were stricken from the record — or "taken down," in House parlance.

"After that," Beuttler says, "everyone was much more civil in their words on the floor."

One inappropriate outburst, however, won't change the political culture that has developed in the age of cable television and the Internet, says Schnur.

And it very likely won't change the trajectory of legislation that was destined to be very difficult to pass, no matter the political climate. "But maybe we'll see just a little bit more restraint in the days ahead," Schnur says.

The retired Baker welcomes anything that will ease what he finds the distressing anger toward the president, and the partisanship that has infected Congress.

"This is the one place where they all come together to listen to each other, to reason, to think and maybe to change some hard-wired opinions," he said. "If they can't do that, there's not much hope for the republic."