Accessibility links
Freddie Hubbard: A Jazz Icon Remembered Jazz trumpeter Freddie Hubbard was on top of the jazz world during the '60s and '70s. But personal setbacks left him unable to play and took him out of the limelight and off the stage. Hubbard died on Dec. 29, but in this story from 2001, he talked about attempting a comeback with an album called New Colors.

Hear An Interview From 2001

Hear An Interview From 2001 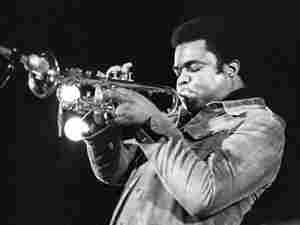 Jazz trumpeter Freddie Hubbard died Dec. 29, 2008, at the age of 70 (hear the story on 'Morning Edition'). In this story from 2001, he talks about attempting a comeback after a series of personal setbacks.

Freddie Hubbard is a legendary name in jazz. In the 1960s, he was a popular and critically acclaimed trumpeter and bandleader. But by the 1980s, he had all but disappeared from the jazz scene. Now, he's attempting a comeback.

Hubbard says that the low point in his career came in the early 1990s. After he split his lip and lost the ability to play, he started drinking, suffered an ulcer and almost died.

"I started drinking Jack Daniel's to feel good, you know? Jack Daniel's and Coca-Cola," Hubbard says. "And I had an ulcer. I went over in London and I fell out. I've never passed out, but I lost four pints of blood. And the doctor said, 'You're going to clean up your body, because otherwise you're looking to go.' So I said, 'Well, I'm not ready to go, so let me cool out.'"

Hubbard's decline is more startling when you consider the heights from which he fell. In the early 1970s, Hubbard supplanted Miles Davis as the top jazz trumpeter in polls of fans and critics. Then he won a Grammy for his album First Light.

Critic Stanley Crouch calls Hubbard one of the most important and original jazz trumpeters of the last 40 years.

"From the moment he played one note," Crouch says, "you knew that was Freddie Hubbard. So he had a sound that was distinctive as Miles Davis, as Louis Armstrong, as Clifford Brown. I mean, he's one of those trumpet players.

"He's also an extraordinary powerful player — great stamina, great range," Crouch says. "He swung very hard, was a beautiful ballad player and seemed to have very few limitations in terms of getting through material, whether the material was very simple material or very complex material. He was quite a musician."

Trumpeter Wynton Marsalis says that Hubbard was one of his main influences.

"All the trumpet players in the '70s, you can hear Freddie Hubbard's sound and everything worth playing," Marsalis says. "He's such a phenomenal trumpet player — just the largeness of his sound, the velocity and the swing."

Hubbard was a little-known bebop player imitating Miles Davis solos when he dropped out of college in Indianapolis and moved to New York. In the late 1950s, the 20-year-old trumpeter shared an apartment with saxophonist and flutist Eric Dolphy, and he quickly established himself at jam sessions across the city. Hubbard says he was playing with John Coltrane at Birdland one night when Davis dropped by.

"Miles was sitting in the front of the stage," Hubbard says, "so I was copying his solo off of one of his records. And so when I saw him, I said, 'Oh my God. I've got to make up something else very quick.' So I came up with something pretty good. So when I got off the stage, he said, 'Come here, man. I want to talk to you.' So I talked to him, and then he introduced me to Alfred Lion. And he told Alfred, 'Sign him up.'"

And that's just what Alfred Lion did, signing Hubbard to a four-record deal with his legendary Blue Note label. Hubbard's reputation burned even brighter as the horn player of choice among leaders of more adventurous jazz.

In addition to turning up on Eric Dolphy's Out to Lunch, Hubbard appeared as a side man on John Coltrane's Ascension, East Broadway Rundown by Sonny Rollins, Herbie Hancock's Maiden Voyage and Oliver Nelson's Blues and the Abstract Truth.

"I don't know how I met all these people," Hubbard says, "but a lot of them came to get me, too. They sought me out because they saw I wanted to experiment, and during that period, I was changing the style of the trumpet. I was trying to play the trumpet like a saxophone. Instead of saying, 'Dah, dah, du, du, di, di, di, do,' I was saying, 'Diddly, do, du, do, dah, do, wham, bam, be,' playing more intervals. And I was trying to make those as long glissando runs, like 'trun, da, dun, dun, da, lun, da, da, da, da, da,' and trumpet players don't do that."

"You know, lifestyle out there is different from mine than in New York," Hubbard says. "I mean, I was in the Hollywood Hills, above the Bowl. I could look at the ocean on this side. I can hear the concerts free at the Bowl. And I had a big swimming pool. I had parties all the time, and the trumpet just was in the corner a lot of the time, when it should have been on my lips."

When he did pick up his trumpet, Hubbard played pop and R&B.

Ten years ago, Hubbard split his lip in Philadelphia by playing without warming up. He continued to perform until the lip got infected and he had to stop. In the 1990s, he says he managed to make a living on royalties when rap musicians sampled his music. Sometimes, he was even asked to play a few notes.

"I guess they'd call me up," Hubbard says, "and like I said, do 16 bars and the money was good, so I didn't feel the need to go out on the road and hustle and bustle."

After some soul searching, Hubbard says he decided to try to play real jazz again. This spring, he released his first record in six years. But the 63-year-old trumpeter says that he'll never have the chops he once had.

"It's mind-boggling to me," Hubbard says, "but I come to the conclusion that I'm not going to play that way again. And as far as giving up all the 30 choruses I used to play — and I used to play with such intensity, trying to play like Coltrane and play, you know, hard and long. I think now I have to dig down and play from my soul."

Hubbard says that he plans to continue working with his current band, The New Jazz Composers Octet, and he wants to visit schools, in part to encourage a new generation of composers.

"We've got to wind this music back to the real deal," Hubbard says. "If you've noticed, nobody's written any good songs lately. What song can you name me that's famous that they've written in the last 10 years? Like a 'Sidewinder.' You remember that? You remember 'Red Clay'? You remember Herbie [Hancock]'s 'Maiden Voyage'? You remember Miles' 'All Blues'? You see what I'm saying? But when we came along behind Coltrane and Miles, then you had to come up with some songs."

Freddie Hubbard revisits some of his best-known songs with new arrangements on his latest CD, New Colors.