Accessibility links
Brain Scientists Misled By Squid For years scientists have used squid data to estimate how human brains use energy. Squid brains are easy to study, as some of their nerve signals are big enough to be seen by the naked eye. Now German scientists say these data are misleading, and they are working to set the record straight. 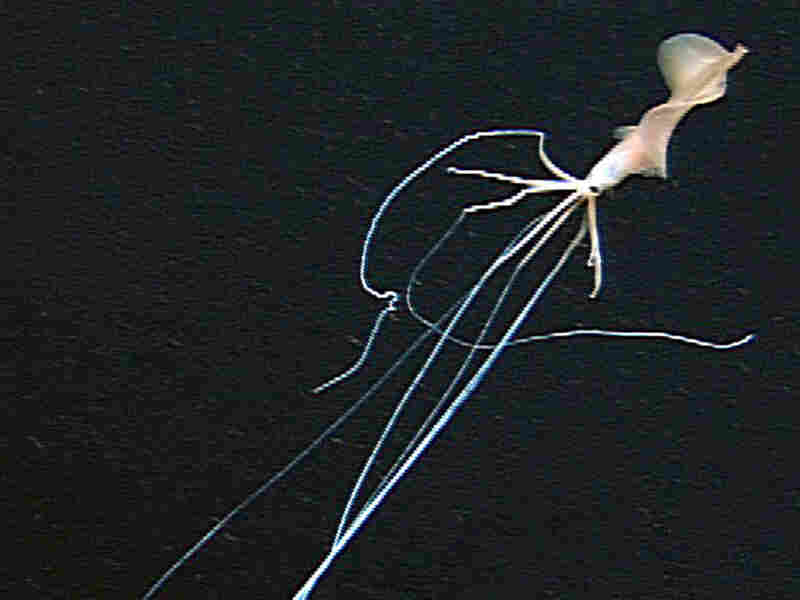 A 17-foot-long deep sea squid swimming off the island of Oahu. For more than 50 years scientists experimented on squid nerve cells, believing they were good models for the human nervous system. MBARI/Getty Images hide caption 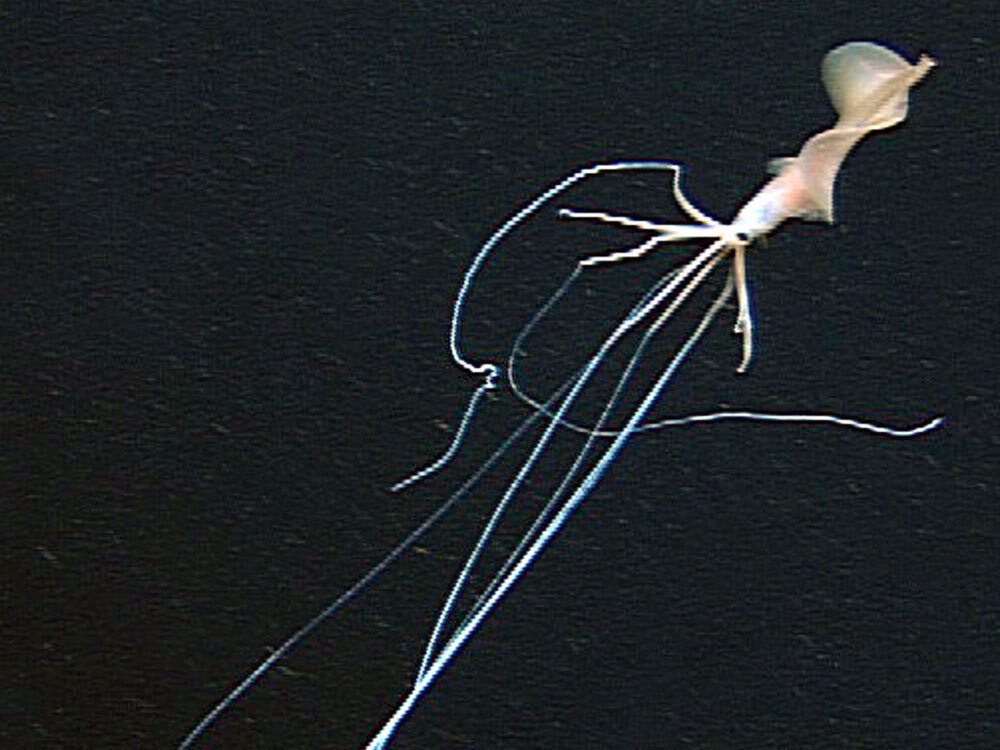 A 17-foot-long deep sea squid swimming off the island of Oahu. For more than 50 years scientists experimented on squid nerve cells, believing they were good models for the human nervous system.

For more than 50 years, scientists who study the brain have been misled by squid. They did experiments on squid nerve cells thinking that those cells were good models for the human nervous system. Now a team of scientists in Germany says the squid may not be such a good model after all.

Squid were long favorites of neuroscientists because their brains send messages along nerve fibers, called axons, that are so big you can see them with the naked eye.

One conclusion they drew from early squid experiments is that it takes a lot of energy for a nerve cell to send out a message, and scientists assumed the same was true of people.

But researcher Henrik Alle at the Max-Planck Institute in Frankfurt doesn't buy that.

"I saw this old work," says Alle. "I thought I cannot believe personally that nature would waste such energy."

Alle figured that nature would have made the process more efficient in mammals, whose brains send a huge number of messages.

When Alle and his team measured precisely how much energy was consumed by the axons in rats, they found that rat axons use only a third as much energy as squid axons. That probably means humans are equally efficient. They report their results in the journal Science.

But does the finding really matter?

Pierre Magistretti, from the Brain Mind Institute in Lausanne, Switzerland, says it does. One reason has to do with our use of fMRI and PET scans, which show the brain at work.

"What you see with an fMRI or PET scan is the amount of energy that a given brain region is consuming to carry out a certain function," says Magistretti.

To fully understand what those scans mean, you have to know precisely where the energy is going. And scientists were misled by the squid model, which assumes most of the energy for brain communication is consumed by the brain cell sending a message.

The new research suggests the real energy drain occurs somewhere else — probably where the message gets transferred to another cell. And Magistretti says that can be a long way from the place where the message originated.

"Imagine if you take a neuron that is in the spinal cord and controls the contraction of your feet muscle," he says. "You can imagine that this axon will be almost 1 meter long."

Now, this doesn't mean fMRI studies are all wrong. In the brain, the distance traveled by most messages is microscopic, so the margin for error may not be significant.

But Marcus Raichle, who does brain imaging studies at Washington University in St. Louis, says the new research has given him something to think about.

Raichle says, "There is always this tendency that if you're working in an area and your experiments are working well and you're getting good data, to not think of the larger context in which this is occurring."

Raichle says the study is a reminder that although we know 20 percent of a human's energy consumption goes to power the brain, we still have a lot to learn about what processes are consuming all that energy.