Accessibility links
Open Your Mind (And Your Mouth) To Okra If you're intimidated by this sometimes-slimy Southern favorite, take baby steps: Try it stewed in a flavorful casserole or gumbo, or fried crisp in a cornmeal coating.

Open Your Mind (And Your Mouth) To Okra

Open Your Mind (And Your Mouth) To Okra 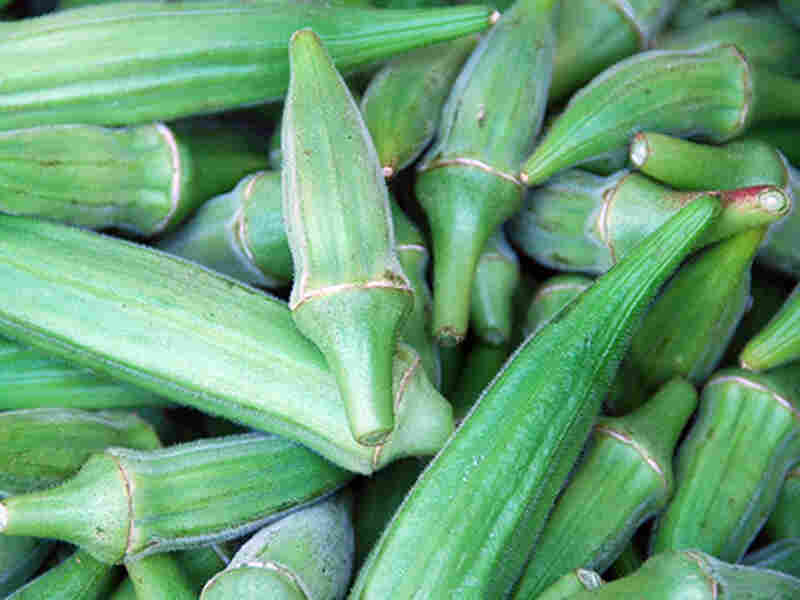 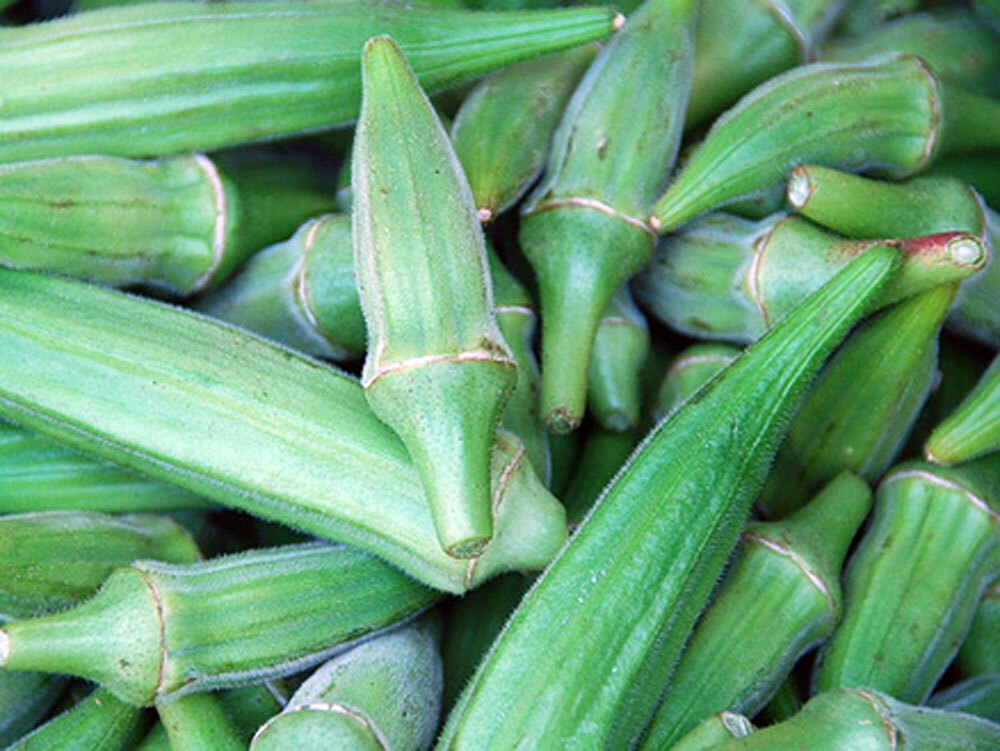 I have a wonderful relationship with okra, but it didn't start out that way.

Having grown up in Rhode Island, I had never even seen okra until I moved to North Carolina in my mid-20s. The meeting took place one warm September afternoon in the teachers' lunchroom. A co-worker had a Tupperware container full of boiled white rice and a mound of some dingy green, soggy vegetable that I could not identify. When I asked her what she was eating, she laughed good-naturedly and said, "Honey, you really are a Yankee, aren't ya? It's okra."

She stabbed a few pieces onto her fork. As she raised it to her mouth, a long, white, elastic piece of — there is no other word for it — slime stretched from the container to her lips. It was like a string of melted green mozzarella suspended in midair.

I felt queasy. "What is that?" I thought. Had the okra gone bad? Was it just a string of saliva? I was too polite to ask, so for the next three months, I averted my eyes each time she ate it. When the spring semester started, I was assigned a new lunch period and, thankfully, this one was okra-free. We would, however, meet again.

A co-worker had a Tupperware container full of boiled white rice and a mound of some dingy green, soggy vegetable that I could not identify. When I asked her what she was eating, she laughed good-naturedly and said, 'Honey, you really are a Yankee, aren't ya? It's okra.'

That summer, I attended a potluck dinner featuring an array of Southern favorites, including a huge basket overflowing with fried okra. I winced when I saw them. Then I thought, what better way to overcome my fear of okra? After all, everything tastes good fried. I closed my eyes and popped a warm, crispy nugget in my mouth. It was a revelation. There was no slimy, slippery texture. There was just a pleasingly salty, crunchy cornmeal coating that gave way to a piece of sweet okra tucked inside. I ate several more.

Susan Russo is a food writer in San Diego. She publishes stories, recipes and photos on her cooking blog, Food Blogga. She is working on two cookbooks (Quirk Books), which will be released in the fall of 2010. When she isn't writing about her Italian family back in Rhode Island or life with her husband in Southern California, she can be found milling around a local farmers market buying a lot more food than two people could possibly eat.

From that day forward, okra became a regular in my kitchen, especially from late summer through early fall, when it is at its tender best. If you can find it, locally grown and freshly picked okra is best. However, frozen and canned okra are available year-round in most major supermarkets.

The name "okra" derives from West African nkru ma, which suggests that it was brought to the Americas by African slaves who commonly used it in stews and soups. When okra is cooked in liquid, it releases a clear gelatinous fluid that acts as a natural thickening agent. Because African slaves grew okra on many Southern plantations, the vegetable became associated with Southern American cookery and later with soul food. Although okra has become mainstream over the past few decades, it remains most dearly beloved in the South.

Okra has a singular appearance. In many parts of the world it is known as "lady's fingers" because of its shape, which resembles a delicate, tapered finger.

When selecting okra, look for brightly colored green pods that are 2 to 4 inches long. Smaller pods are prized for their tenderness, while larger pods are often considered too fibrous. The okra should be firm and sport a soft, peach-like fuzz. Avoid okra that is bruised, darkened or limp. Place whole, unwashed okra in a plastic bag, or wrap in a paper towel, and store in the crisper drawer of the refrigerator for up to three days. When you're ready to cook the okra, rinse it well and pat dry. Cut off tops and tails, and discard.

Although okra can be eaten raw in salads, most people prefer it cooked. Cooked okra tastes similar to green bell peppers, but earthier. Okra can be sauteed, boiled, roasted, baked, steamed and even grilled. To reduce its viscous quality, many home cooks add something acidic such as vinegar or tomatoes to the okra while it's cooking.

Perhaps okra's most prominent role is in gumbo, the classic New Orleans Creole stew. The name "gumbo" is an African name for okra; in fact, in New Orleans, the word "gumbo" used to refer to both the vegetable and the stew. Today gumbo refers primarily to the stew, which usually includes okra, as well as cooked meats or shellfish, and spicy Creole seasonings.

Though there is much to love about fried okra and okra gumbo, there are many more delicious possibilities. Because okra gets along so well with corn, it makes a flavorful addition to succotash, corn chowder or creamy baked corn casseroles. It also works well in vegetable soups, meat stews and stir-fries, especially when paired with onions, red bell peppers and zucchini. And don't forget about pickled okra — a sour, salty and tangy concoction of okra, vinegar and pickling spices.

I live in California now, but I still have a wonderful long-distance relationship with okra. Not a summer goes by without us getting together, and this year has been no exception.

Even the most okra-averse can't resist these fried nuggets. Enjoy them plain or splash them with hot sauce for a bit of heat. Do not substitute frozen okra, which will be too watery. 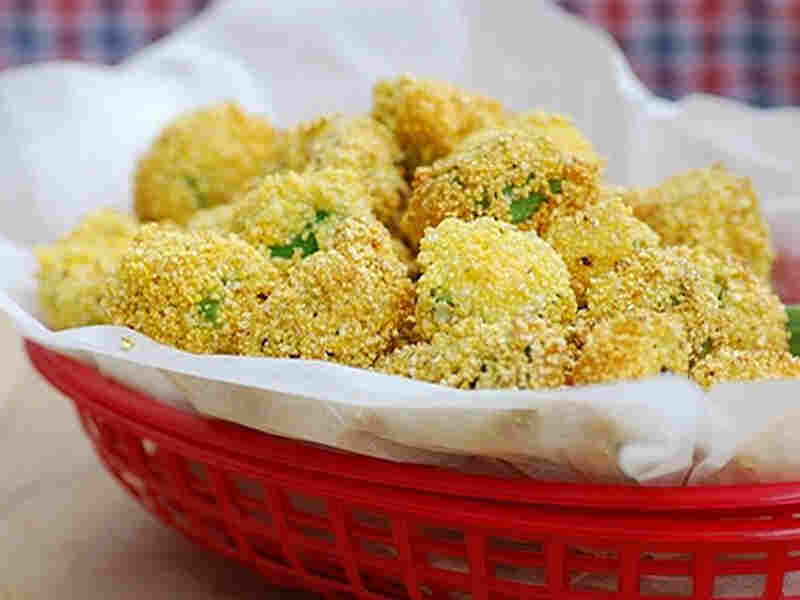 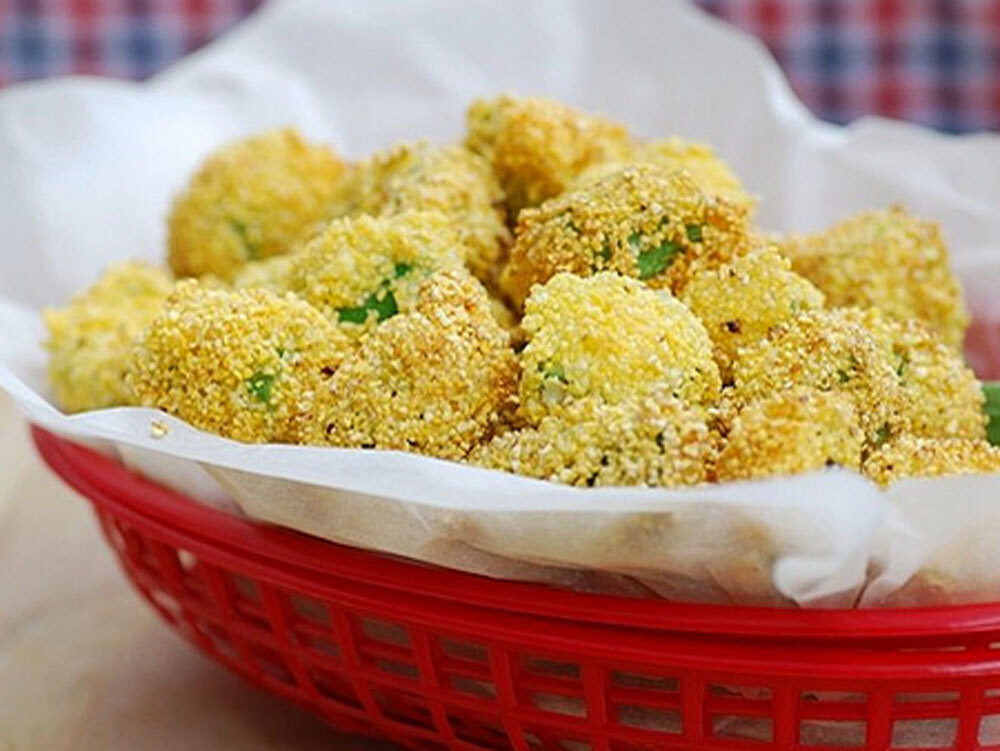 Canola or vegetable oil for frying

Fill a small, deep, heavy-bottomed pan with 2 inches of canola oil. Heat to 350 degrees (if using a thermometer). Otherwise, test the oil by dropping a bit of cornmeal in it. If it sizzles and rises quickly to the top, then the oil is ready.

Fry a few pieces of okra at a time. Fry until just golden brown and floating to the surface. Remove with a slotted spoon. Place okra on a paper-towel lined baking sheet. Serve immediately.

This humble casserole is pure comfort food. Underneath the buttery, golden crumb topping is a medley of fresh vegetables baked in a rich, creamy cheese sauce. Pair it with a biscuit or slab of cornbread for a vegetarian meal, or serve it alongside grilled chicken, steak or pork. Frozen, unthawed okra may be substituted. 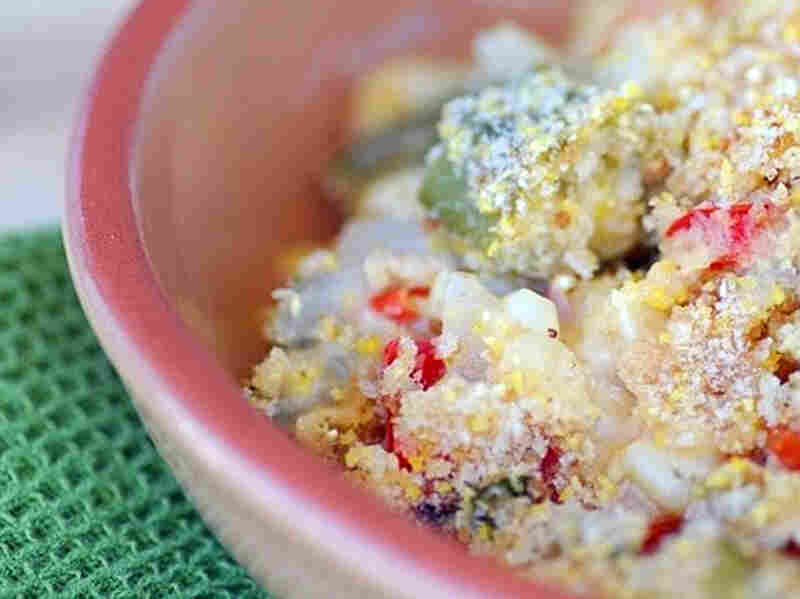 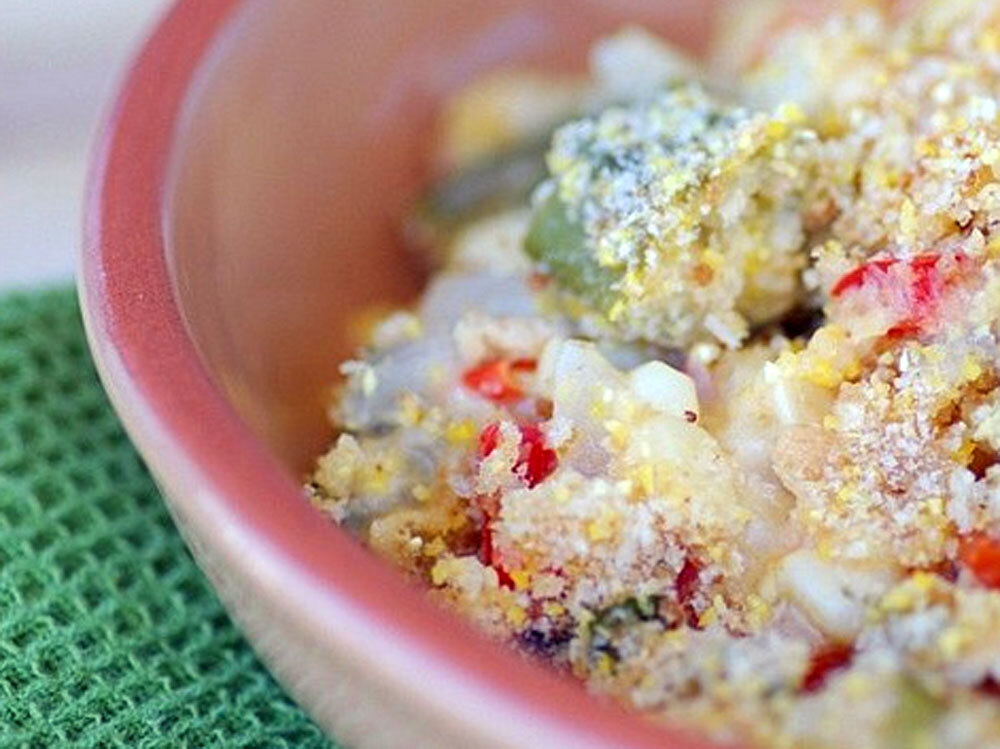 A generous sprinkling of salt

Position a rack in the middle of the oven, and preheat to 350 degrees. Coat a 9-inch round ceramic or glass baking dish with cooking spray.

In a large skillet over medium-high heat, melt 1 tablespoon butter. Add onion, and saute until soft and translucent, 3 to 5 minutes. Add okra, red bell pepper, corn and jalapeno. Saute until vegetables are lightly browned, about 5 minutes. Stir in cherry tomatoes.

In a small bowl, whisk milk, flour, baking powder, parsley and salt. Pour over the vegetables and stir. Add the cheese, and stir until just melted and mixture begins to bubble, 2 to 3 minutes. Pour into the prepared baking dish.

In a small bowl, melt remaining 1 tablespoon butter. Add bread crumbs and cornmeal, and toss until butter is absorbed. Sprinkle evenly over the top of the casserole.

Bake for 30 minutes, or until the crumbs are golden brown and the sauce is bubbling around the edges of the dish. Cool for 5 minutes before serving. Serve hot.

Earthy okra has an affinity for acidic stewed tomatoes, which may explain why the pairing is popular in many world cuisines, including American, African and Indian. This spicy okra and stewed tomatoes dish pairs well with chicken, beef or pork and makes a hearty vegetarian meal when served atop grits, white rice or cornbread. Frozen, unthawed okra may be substituted. 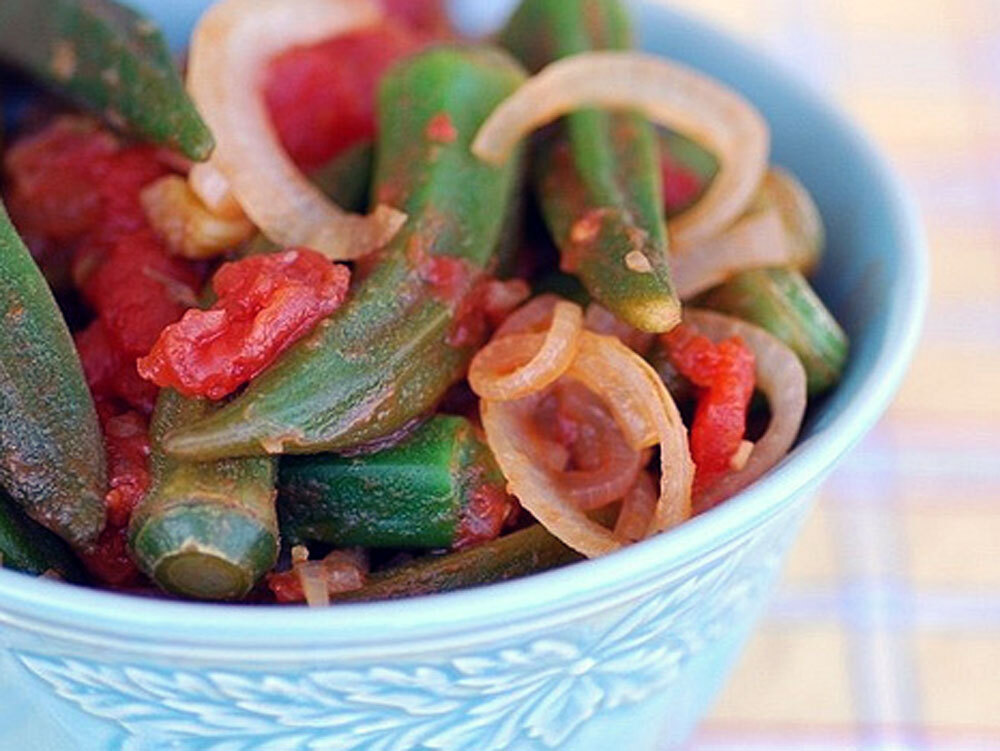 1 (14-ounce) can stewed tomatoes with juice

Wash okra and pat dry. Remove stems. Either leave whole or, if you prefer, cut into 1/2-inch slices.

Bring to a boil, then simmer, partially covered, for 10 to 15 minutes, or until okra is tender but not mushy. Serve hot.

Traditionally, New Orleans' gumbo is thickened with okra, file powder (a powder made from dried sassafras leaves) or roux (a paste of flour and fat). Because file powder isn't widely available, many gumbo recipes call for a mixture of okra and roux. This Cajun gumbo recipe is based on several gumbo recipes by Emeril Lagasse. Frozen, unthawed okra may be substituted. 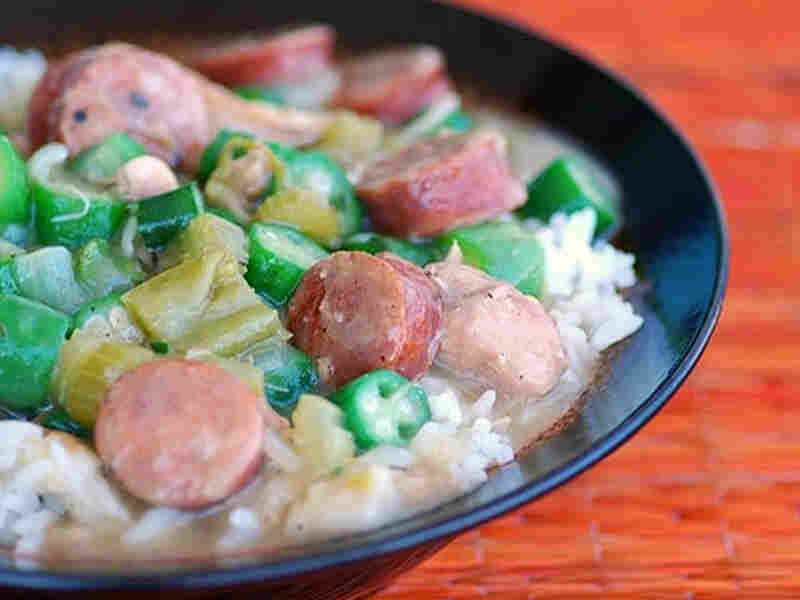 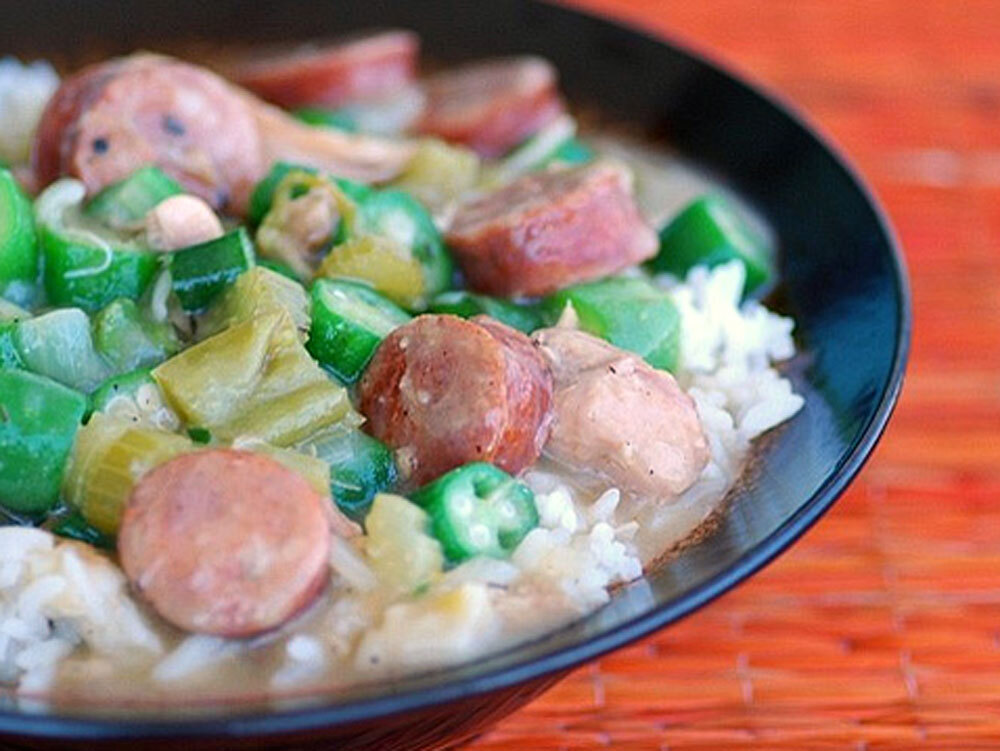 1 pound smoked sausage, such as andouille or kielbasa, cut into 1/2-inch-thick slices

In a medium, heavy-bottomed pot, over medium heat, combine 1/2 cup vegetable oil and the flour. Cook, stirring slowly and constantly for 15 to 20 minutes, to make a medium brown roux. Set aside.

In a large, deep, heavy-bottomed pot, heat 1 tablespoon oil over medium-high heat. Add the sausage and cook until well browned, about 8 minutes. Remove the sausage with a slotted spoon, and drain on a paper towel-lined plate. Set aside.

Season the chicken with 1/2 tablespoon Creole seasoning. Add it to the pot and cook until well browned, 5 to 6 minutes. Remove the chicken and set aside.

Add the onions, celery and peppers and cook, stirring until just wilted, 4 to 5 minutes. Add okra, and cook for 5-7 minutes, or until it releases its "slime." Add the reserved sausage, chicken, salt, cayenne and remaining 1/2 tablespoon Creole seasoning, and cook for 2 minutes. Stirring, slowly add the chicken broth, until well combined. Bring to a boil. Add the roux, a little at a time, whisking to incorporate. When all of the roux has been added, bring gumbo to a boil. Reduce heat to medium-low and simmer uncovered for 1 1/2 hours, stirring occasionally. When finished, stir in fresh parsley.