Accessibility links
Federal Reserve Mulls Its Role One Year After Crisis As the global financial system teetered on the edge of collapse a year ago this week, the Federal Reserve stepped in with unprecedented actions. Yet some lawmakers say the Fed should have done more to prevent the crisis. 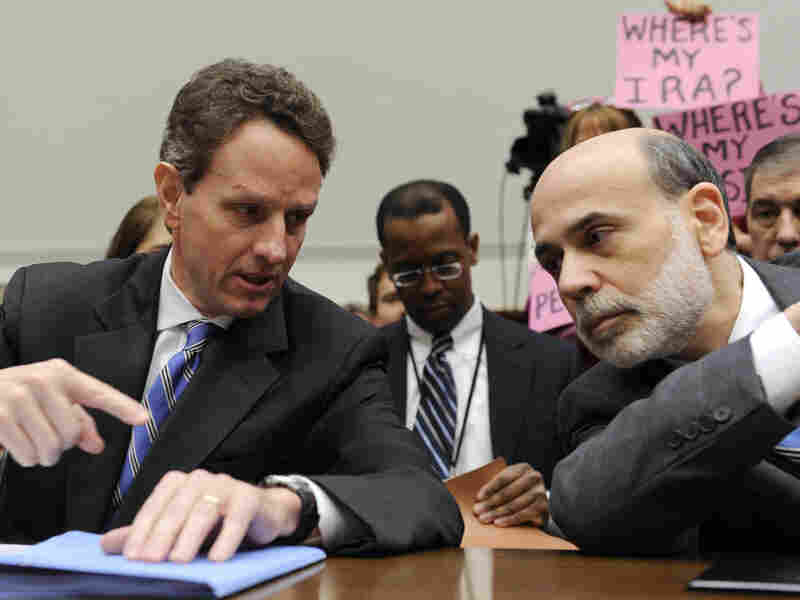 A year ago this week, the global financial system teetered on the edge of collapse. Large financial institutions were sinking, swamped by losses linked to subprime mortgages. In the early stages of the financial crisis, it was the Federal Reserve that did the heavy lifting.

That's because only it could commit billions to the rescue, quickly. After all, the Fed can create money out of thin air, something the Treasury, and even Congress, can't do.

And speed was of the essence, says Mohamed El-Erian, CEO of the giant investment firm PIMCO. Erian says he remembers vividly the fear and uncertainty in the financial markets one year ago this week.

"And I also remember I called my wife up and said, 'Jaime, go to the bank, go to ATM and pull out as much cash as you can, because I'm not sure whether the banks will open tomorrow,' " he says.

What triggered the panic was the government's decision to let the Wall Street firm Lehman Brothers fail. Investors had expected a rescue: Just days before, the Fed and Treasury had saved Fannie Mae and Freddie Mac, and the investment bank Bear Stearns had also been bailed out six months earlier.

When Lehman collapsed, trust evaporated, and lending between banks seized up, says Erian. "Had the Fed not stepped in at that point, using unconventional policies, we would be facing Depression 2.0, which would have made the '30s seem less bad than they actually were."

Just two days after the fall of Lehman, the government changed course and rescued insurance giant AIG, with the Fed providing an $85 billion loan. That surprised former Fed Vice Chairman Alan Blinder. "If you think about this, this was an insurance company, never regulated by the Fed. And the Fed sort of quasi-nationalized it, just like that. It was stunning," he says.

Surprises From The Fed

The Fed had always been the "lender of last resort" to depository institutions like commercial banks. But it hadn't lent to investment banks in more than 60 years, and never to insurance companies. As the crisis developed, the Bernanke Fed continued to surprise:

At its peak, Fed lending to fight the financial crisis totaled nearly $1.5 trillion.

Blinder says the Fed stepped up in a big way. "It looked at this situation — I mean, this is to Bernanke's everlasting credit — and said, 'You know, one of the things the financial markets are short on right now is the willingness to take risk.' And it said to itself, 'Well, we can take risk,' and that's what they started doing."

So how much will those risks cost taxpayers? Blinder thinks the Fed won't lose more than $30 billion on its emergency lending. That's because for the most part, the loans are backed by strong collateral. And, says Blinder, the Fed is charging interest and fees and could actually end up making money.

Of course, taxpayers could still take big losses in other rescue efforts like the Troubled Assets Relief Program, but that's not a Fed program.

Vincent Reinhart, a former Fed official now at the American Enterprise Institute, also thinks the Fed could end up making money. But he believes the Fed's intervention has been damaging in other ways. He says the popular, but mistaken, version of events was that the global financial system was hit by a perfect storm and the Fed came to the rescue.

Reinhart says that left the public with the vision of "Ben Bernanke in the yellow slicker, fighting the elements to keep the ship of the economy afloat." But the metaphor has a problem, he says: The government actually did things that made the financial crisis worse.

Specifically, Reinhart argues that Bernanke — along with Treasury Secretary Henry Paulson and Timothy Geithner, then president of the New York Fed — made a big mistake in rescuing Bear Stearns in March 2008.

"Policymakers didn't seem to explore enough alternatives before they arrived at the conclusion that they should lend to an investment bank for the first time in 60 years," Reinhardt says.

He says that set up the panic of last September, because when Lehman Brothers faltered, Wall Street expected the government would rescue it, too. In a 60 Minutes interview last March, Bernanke suggested that he had argued against letting Lehman fail, but was powerless to stop it.

"There were many people who said, 'Let them fail, you know. It's not a problem. The markets will take care of it,' " Bernanke said. "And Lehman proved that you cannot let a large, internationally active firm fail in the middle of a financial crisis." As to whether it was a mistake to let it fail, Bernanke said, "We did not have the option; we didn't have the tools."

Bernanke pointed out that the Fed can only lend to firms that can put up solid collateral, and Lehman couldn't.

Blinder, now a professor at Princeton, says that nevertheless, letting Lehman collapse was a huge mistake. But, he says, since then, the Bernanke Fed has been creative and effective in attacking the credit crisis.

"The irony is, I think, in some sense the period from late September of last year to now has been the Fed's finest hour," Blinder says. "But the Fed is struggling now to maintain its independence, and there's a lot of objection to giving it more authority, which the Treasury has proposed in the financial reform."

The Obama administration wants to make the Fed a superregulator that would monitor risks to the whole financial system. Some lawmakers are skeptical, though. They believe the Fed should have done more to prevent the crisis by restraining reckless mortgage lending.

In addition, Reinhart says, its rescue of big financial firms has given the Fed an image problem. "The general public sees it more as an institution to help the big guy and one that is willing to tilt the playing field in the advantage of Wall Street," he says.

To fight that perception, Bernanke is taking his case directly to the public. In another break with precedent, the chairman has granted television interviews and even answered questions from regular folks in a televised town hall meeting. He hopes to convince Americans that the extraordinary actions the Fed has taken during this financial crisis make it deserving of the public trust.