Accessibility links
King Sunny Ade: True Juju Royalty For King Sunny Ade, it's all about bringing people to the dance floor. Now 63, the African juju king was back on U.S. stages this summer and recorded what could be his first music outside of Nigeria in a decade. 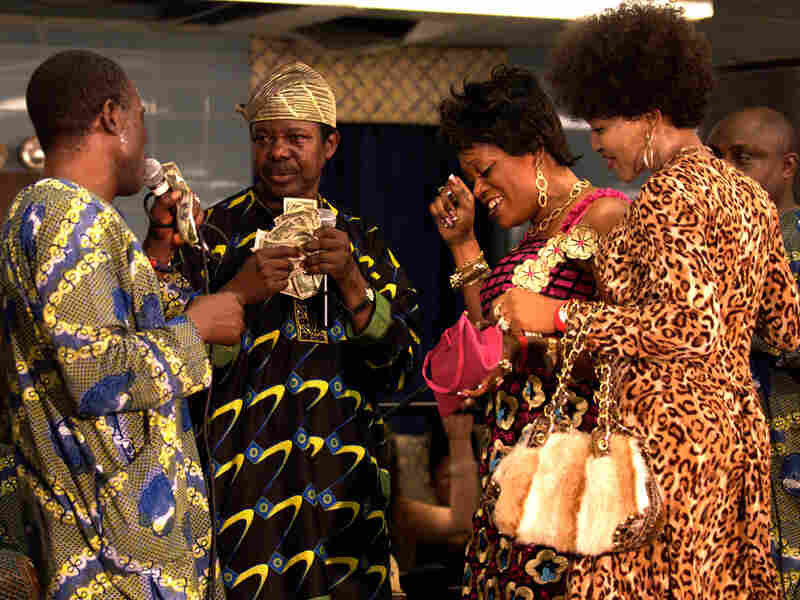 In a fluorescent-lit, basement auditorium at a Brooklyn high school, King Sunny Ade holds an African party in which the audience "sprays" the musician. That's when you go onstage and make an offering to the singer, generally in the form of cold cash pressed on the forehead. Banning Eyre hide caption 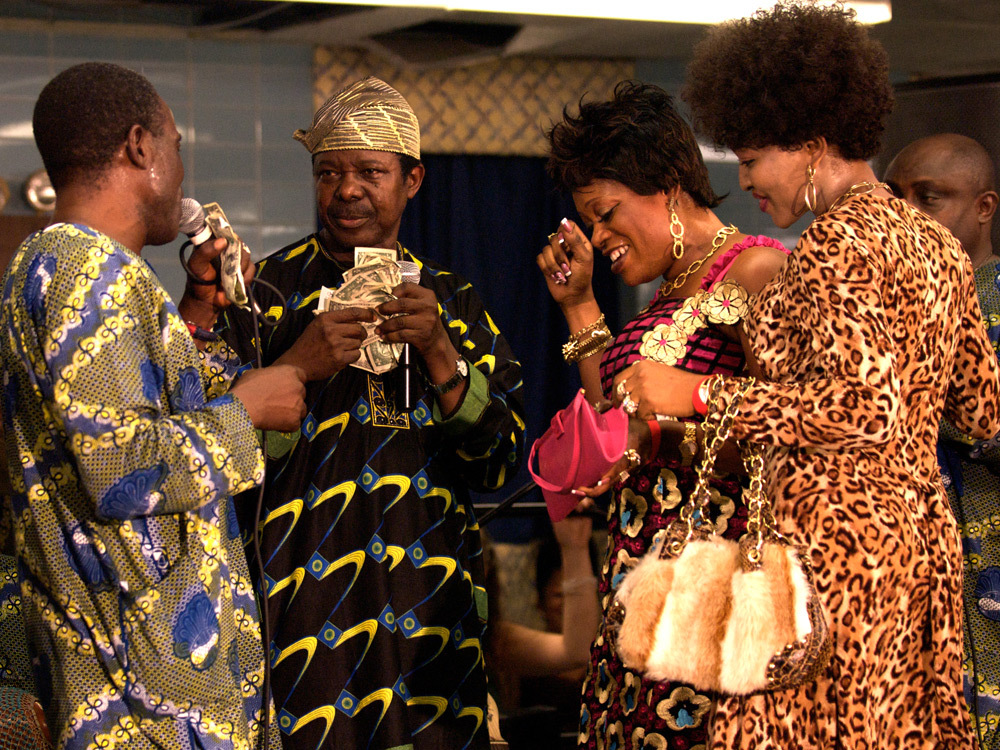 In a fluorescent-lit, basement auditorium at a Brooklyn high school, King Sunny Ade holds an African party in which the audience "sprays" the musician. That's when you go onstage and make an offering to the singer, generally in the form of cold cash pressed on the forehead. 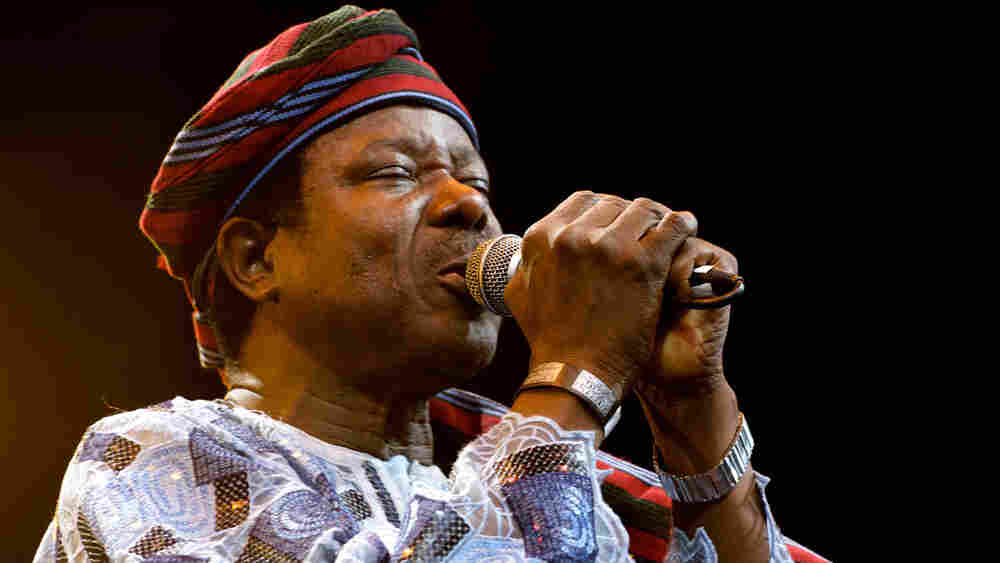 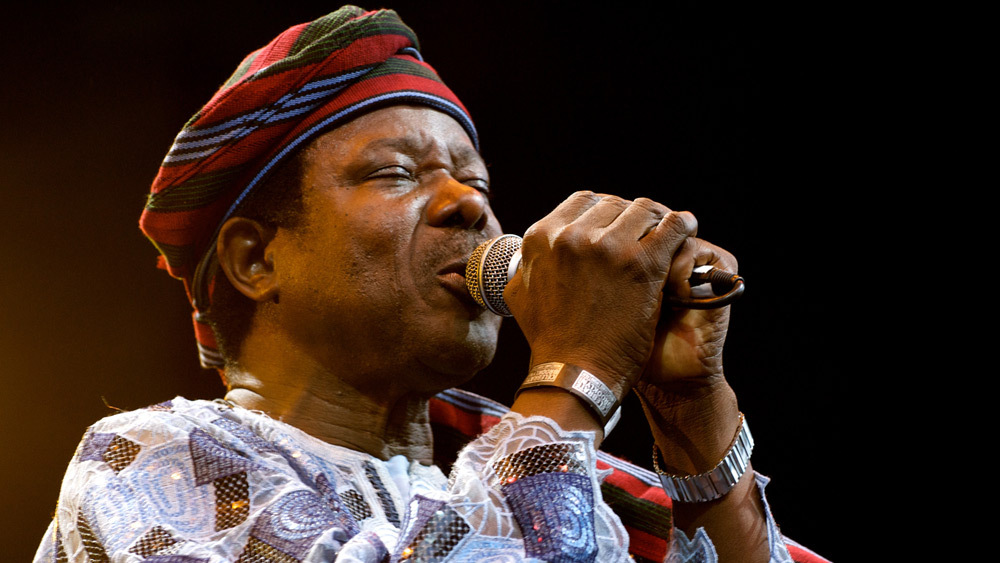 Nigeria's King Sunny Ade plays juju music, a vocal-rich blend of percussion, guitars, keyboards and choreographed dance. In the early '80s, Ade and his band heralded a coming wave of African pop music in America. Now 63, the juju king was back on the U.S. stage this summer. He wound up his tour in a studio outside Philadelphia to record a new CD.

It's been nearly a decade since King Sunny Ade released new music outside Nigeria. His touring band is a little smaller and younger. But the music hasn't changed. Something else that hasn't changed is Ade's playful commitment to musical ecstasy. Asked what he's up to with his new recording, he didn't miss a beat.

"First of all, it's for the people to come to the dance floor," Ade says. "Let's do it together. Let's dance together. When you hear me, it's for you to draw your baby closer to you and then dance along with me, because the whole world is full of stress. Let's blow it out. Let's allow the stress to go, at least for a while."

After decades working the music scene in Lagos, one of Africa's biggest and toughest cities, Ade knows a thing or two about stress. One of his biggest headaches is Nigeria's music pirates, who've perfected the art of flooding the market with cheap, inferior CD copies within days after a big release. Ade says he's given up fighting the pirates and now seeks to woo them to his side.

"You know, nowadays, it's more or less that they are not even hiding it anymore," Ade says. "They even have a union or an association. They confronted all of us and said, 'If you want to take us to court, we have enough money to fight it in the court.' So instead of fighting each other, sit down at a round table: 'Why do you do this?' Actually, we don't call them pirates to their face. We call them 'special distributors.' "

Whether it counts as tact, diplomacy or making the best of a hopeless situation, Ade's approach to piracy echoes his music — what he calls his "synchro system." It's all about cooperation, harmony and working together to create something beautiful.

Ade formed his first band in 1967. He's made dozens of recordings since, but the real heart of his artistry lies in the way he connects with a live audience. His band can electrify a festival stage with deep grooves and graceful moves, but to really understand Ade's connection with Nigerians, you've got to experience one of his African parties, like the one he hosted this summer in a fluorescent-lit basement auditorium at a Brooklyn high school. The audience mostly consisted of well-heeled Nigerians who came to listen and dance, but also to spray. That's when you go on stage and make an offering to the singer, generally in the form of cold cash pressed on the forehead.

"I've been given flowers, been given handshakes, standing ovations. Those things, even money cannot buy it. It's love," Ade says. "And when it comes to African style or Nigerian style or pressing money on my forehead ... It's an appreciation for what I've done, or what I am doing. They will come close to you, shower some money on you. And if they have a gift, they will tell you there is a gift. Some people can give cars, refrigerators, whatever, whatever."

Songs To Get Happy

At this Brooklyn party, Ade and his band didn't take the stage until 2 a.m. And when I left almost two hours later, they had been playing non-stop, without so much as a pause between songs. No cars or fridges were offered that night, but loads of dollar bills, and a few 20s and even 50s in the mix. Giving money to a musician is a way of showing off in a social setting. But Ade doesn't like it when things get competitive.

"Those who are doing a competition, I don't belong to that, simply because the end of it can cause a row or a fight. And I don't want that. I want everybody to be my friend," Ade says. "That's why I don't sing political songs. I don't use my songs to abuse. I sing free songs that we are all going to be happy. Sometime I can be singing funny things. Everybody will be laughing, you know."

Ade knows his audience, but he doesn't pander. Other African singers have changed their style to please foreigners and ended up losing the home crowd. Ade made his mark on juju music early on, but since then, he's resisted the fads and fashions of four tumultuous decades. That confidence and fidelity is what makes him a king, not a mere politician.