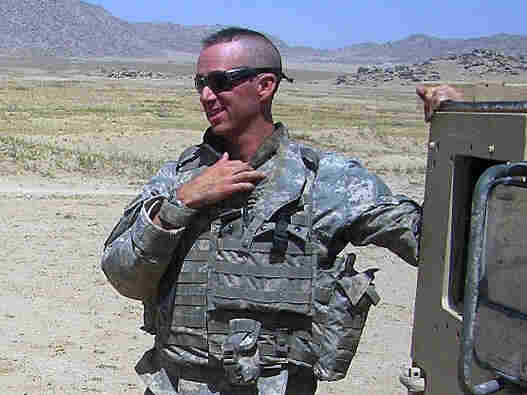 Capt. Benjamin Tupper has some stories to tell about his work with new Afghan soldiers. His new book, Welcome to Afghanistan: Send More Ammo, details his time as an embedded trainer in the Afghan National Army.

Tupper, a member of the Army National Guard, calls the troops he worked with "The Flip-Flop Army."

"Afghan soldiers — it's a new army. It's a young army," Tupper tells NPR's Renee Montagne. "And there's really no uniformity, per se.

"It wouldn't be uncommon to have some Afghan soldiers jump out of a pickup truck in pursuit of Taliban wearing flip-flops or basketball sneakers, Speedo swim goggles, baseball caps, New York Yankee T-shirts — the gamut."

But, Tupper said, that doesn't keep the soldiers from staying in "fighting form."

"They come from a tradition of individual fighters," Tupper says. "That is how you make your reputation. Individual acts of bravery and courage."

Some of the funniest things happen when your life is on the line and you do something stupid.

In fact, Tupper says he heard many American soldiers say of the Afghan soldiers: "These guys are braver than anybody I've ever seen."

Tupper calls his book a tragicomedy, although he's aware of the danger in calling a book about war a comedy. But Tupper thinks some of the most dangerous moments on the battlefield can also be the most amusing.

"Some of the funniest things happen when your life is on the line and you do something stupid," Tupper says. "And you go back that night, and you sit around the base, and you retell the stories, and you'll never laugh harder."

Tupper maintained a blog during his work with the Afghan National Army. "I found it very therapeutic," he says of the blog.

"And I didn't spare any details. I had to be open and honest about what was going on and what it was doing to me and how difficult it was," Tupper said.

"You know, the Army gave me pills for sleeping, and pills for anxiety and depression — but for me, writing is what worked the most."