Accessibility links
What U.S. Automakers Might Do to Curb Costs Domestic car companies will come together next month for hotly debated contract talks. One option for the automakers to consider is copying heavy-duty equipment maker Caterpillar's successful two-tier labor contract that pays new employees far less than before.

Listen
What U.S. Automakers Might Do to Curb Costs 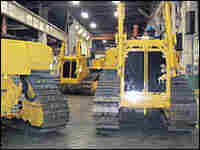 The Caterpillar plant in Peoria, Ill., builds some of the biggest bulldozers in the world. After a union battle in the 1990s, Caterpillar now has a two-tier wage system. Jack Speer hide caption

When representatives from the big three domestic car companies sit down next month with the UAW autoworkers union to kick off contract talks, the discussions are expected to be among the most contentious in years.

General Motors, Ford and Chrysler have all piled up enormous losses in recent years and are expected to demand big concessions. At the same time, soaring costs for current and former employee benefits have resulted in a huge cost advantage for foreign automakers building cars in the U.S. That gap will not be easy to close.

The UAW, officially know as the United Automobile, Aerospace and Agricultural Implement Workers of America, will be looking to protect both its current workers and its retirees from taking any big hits. One thing the UAW might consider is the contract reached several years ago with another big manufacturer: Caterpillar.

The key to the U.S. auto industry's future might be inside a bustling plant in Peoria, Ill., home to the heavy-equipment maker that builds some of the biggest bulldozers in the world. Like Detroit, Caterpillar has assembly lines of employees represented by UAW.

After a bitter battle with the union during the 1990s and several strikes, one of which lasted 17 months, Caterpillar emerged with a two-tier wage system that has allowed it to grow and prosper. The agreement pays new employees far less: about $22 an hour, as opposed to the $40 an hour plus benefits that starting workers used to make.

Caterpillar CEO Jim Owens has been with the company for 34 years, four as the chief officer. Sitting in his office with a view of the Illinois River, he said it was a difficult time for the company but that the old system was not working.

In the end, the UAW agreed to a six-year deal with Caterpillar. Along with the lower wage structure, the deal requires employees to pay some of their own health care costs.

"The United Autoworkers has forced them to benchmark against each other in terms of their total labor costs," Owens said. "Their wages are, in many cases, ... twice as much ... as the national level for similar work."

When benefits are taken into account, U.S. automakers pay workers an average $70 an hour. Japanese automaker Toyota pays workers doing the same jobs in its U.S. plants $40 to $45 an hour.

Some of that discrepancy can be attributed to retiree benefits. For every active U.S. autoworker, there are three retirees receiving health and pension benefits – expenses that foreign automakers with U.S. plants do not face.

Speaking on Capitol Hill this month, UAW President Ron Gettlefinger said the union will not turn its back on hundreds of thousands of retired auto workers.

"The UAW believes it would be immoral and irresponsible to abandon the hundreds of thousands of retirees who helped build General Motors, Ford and Chrysler," Gettlefinger said. "We simply cannot do that."

No one expects the UAW to accept a two-tier wage structure in the upcoming negotiations. But it's not possible to get the cost reductions the automakers are looking for just by cutting benefits. Friday, the UAW accused the domestic automakers of "posturing" when they say they need to reduce labor costs by $30 an hour.

But the union no longer wields the clout it once did. In just the past year, UAW membership has declined by 70,000 because of buyouts and attrition.

Though the agreement reached with Caterpillar might seem like a negative for the UAW, there could be benefits. The year after the two-tier labor agreement went into effect at Caterpillar, the company added more than 4,000 U.S. jobs. The jobs pay less than previous positions, but the deal has helped boost union ranks.

Over the past several years, employment at Caterpillar is up 25 percent to around 95,000 people. Owens said that without the two-tier wage system, his company would have had to move more of its operations overseas.

The threat of moving jobs offshore is a big stick that the Detroit automakers might wield as contract talks heat up, along with retiree benefits.

"We were on a path to be not competitive in the world market had we not changed," Owens said. "We will pay good, at or above market compensation, to employees at every level throughout the company. But we can't pay substantially greater than the market will bear — it just doesn't work."