Accessibility links
Exploring A Moon By Boat Scientists are designing a "lake lander" that would set sail on one of Saturn's moons. Titan is the only place in our solar system other than Earth known to have bodies of liquid on its surface, making this the first spaceship that lives up to the name. 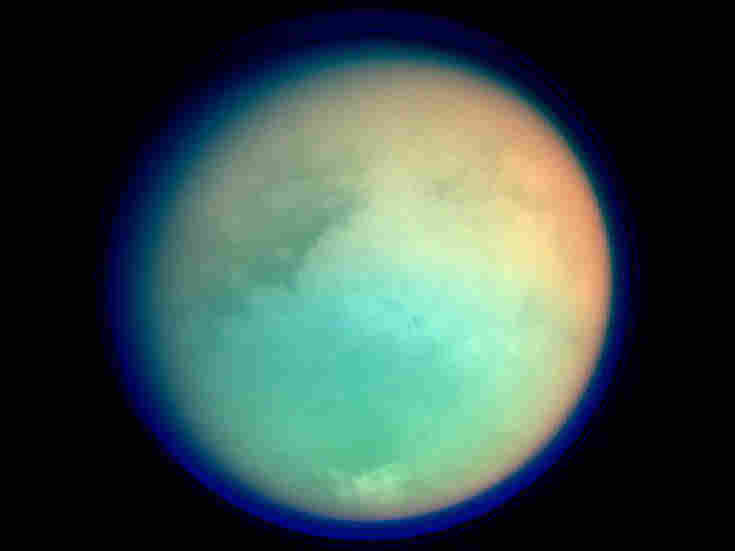 Titan has a very large atmosphere that extends hundreds of kilometers above its surface. Cassini's imaging science subsystem captured this image of Titan's atmosphere through ultraviolet and infrared filters on Oct. 26, 2004. NASA/JPL/Space Science Institute hide caption 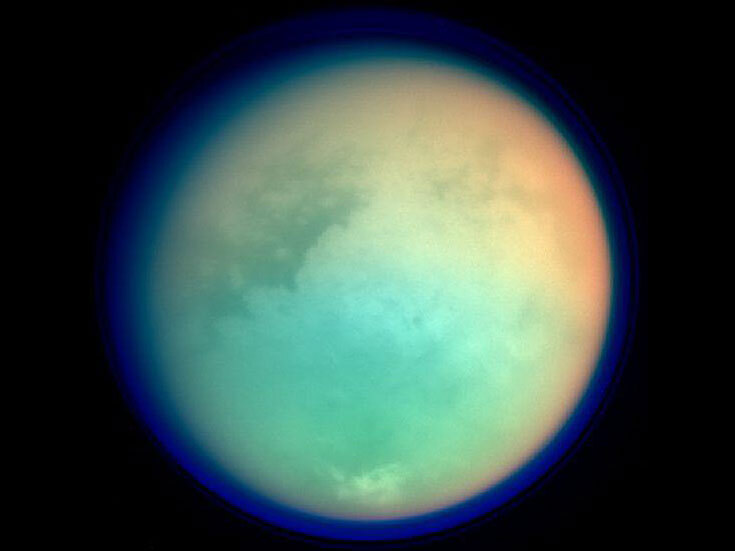 Titan has a very large atmosphere that extends hundreds of kilometers above its surface. Cassini's imaging science subsystem captured this image of Titan's atmosphere through ultraviolet and infrared filters on Oct. 26, 2004.

The first nautical exploration of an extraterrestrial sea could come as soon as 2022, if a team of researchers can convince NASA to try sailing a boat on an alien world.

"The overwhelming reaction I get from scientists and engineers is, 'Oh, that's really cool.' I mean, people are just instantly kind of excited and intrigued to say, 'Could we really go do this?' " says Ellen Stofan, a planetary geologist at Proxemy Research in Maryland and an honorary professor at University College London.

Stofan is leading an effort to design and propose a relatively low-cost mission to Titan, one of Saturn's moons.

Sailing — But Not In Water

Titan is the only place in our solar system other than Earth known to have bodies of liquid on its surface, Stofan says.

The liquid isn't water, of course. Temperatures on icy Titan reach minus 290 degrees Fahrenheit. The lakes are actually liquid methane and ethane.

Here on Earth, methane is a gas, says Stofan. But on Titan, "methane acts just like water acts here on Earth. Methane forms clouds in the atmosphere. It rains down on to the surface and forms rivers, lakes and seas." 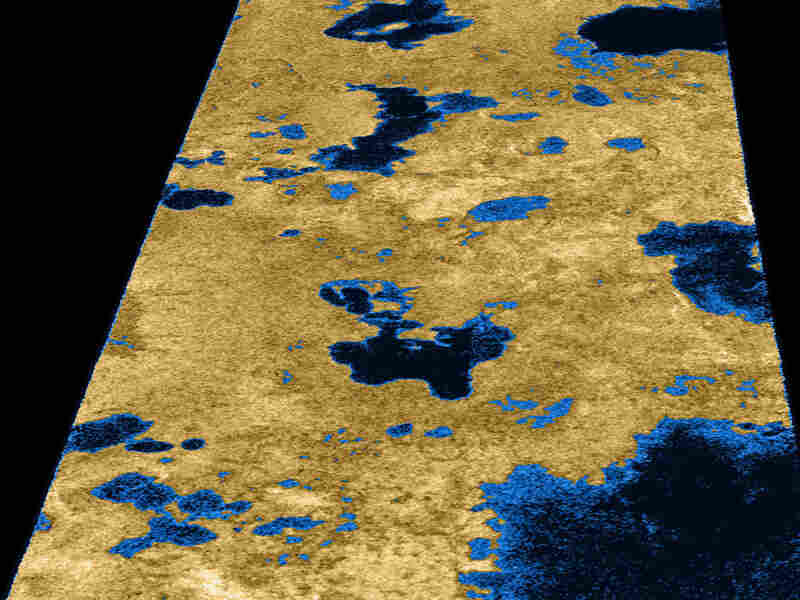 This radar image taken by Cassini in July 2006 of Titan, one of Saturn's moons, provides convincing evidence that it is covered by large bodies of liquid. NASA/JPL/Space Science Institute hide caption 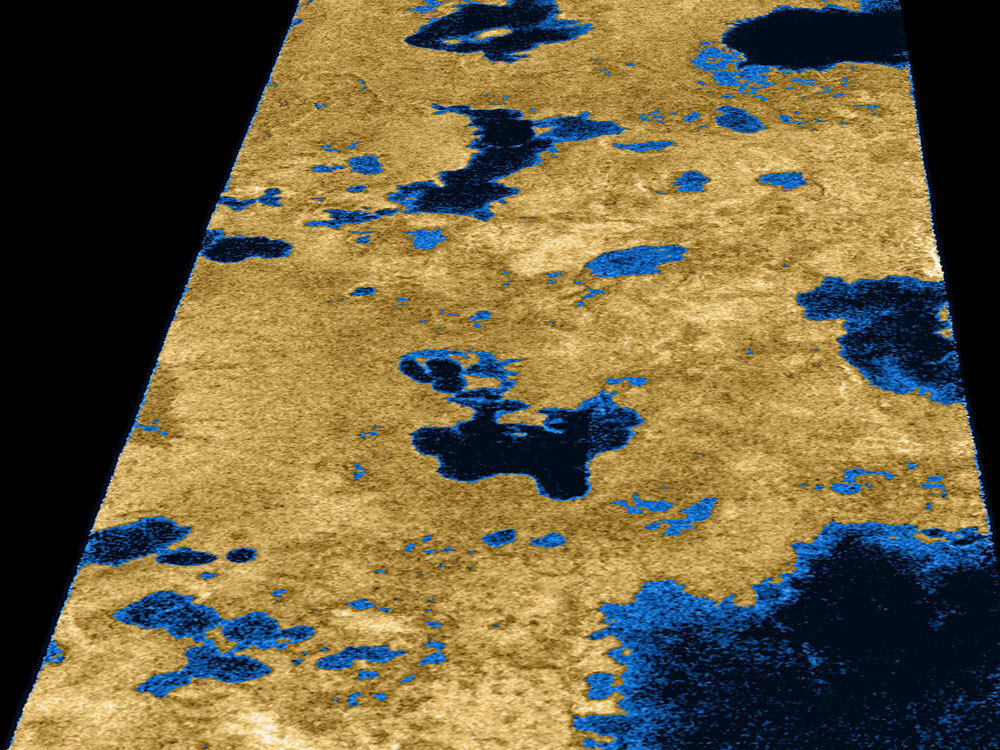 This radar image taken by Cassini in July 2006 of Titan, one of Saturn's moons, provides convincing evidence that it is covered by large bodies of liquid.

A few years ago, the Cassini spacecraft orbiting Saturn sent back radar images of the northern polar region of Titan, and those images showed evidence of hundreds of lakes. Some of them are large — the size of North America's Great Lakes.

One of the large lakes — either Ligeia Mare or one called Kraken Mare — would be the target for a probe that would splash down and float around, according to a proposal that Stofan is working on with some other Titan experts.

And that would be something new. In the past, space exploration has been done with spaceships that orbit planets or fly by them, or with probes that land on a planet's surface and maybe drive around, like the Mars rovers.

The "boat" or "lake lander" that Stofan is designing with her colleagues would not look anything like the ships used to explore Earth back in the days of Christopher Columbus or Ferdinand Magellan.

"It's certainly not going to look like what most people conceive of a boat looking like," says Stofan. "It'll look more like a little capsule that floats."

She says that like the bell-shaped capsules the Apollo astronauts rode home, it will drop straight into the target sea.

The vessel will have a mast, "but that's just to hold a camera. We don't have a sail," she says.

But the wind would still be expected to push this buoyant craft around the lake. The probe could drift for months. It would have a small, nuclear-powered engine. And it could shout its data directly back to Earth.

There's no danger of a shipwreck, according to Stofan. Titan's lakes have waves, but probably just gentle ones — unless there's a storm. Still, even that doesn't worry her. "In fact, we'd love for that to happen, to be able to return an image showing a rainy day on Titan and to see those methane raindrops falling down into the lake," she says. "The wind might kick up a little, but nothing as violent as sort of the tropical storms and hurricanes we get here on Earth."

Eventually, she says, the ship might just run aground in a muddy beach and get stuck.

The mission could launch around 2016 and be sailing on Titan around 2022 — if this team gets through a highly competitive selection process to get funding from NASA. Stofan and her colleagues are busy working up their proposal for when NASA begins to accept ideas for future Discovery-class missions.

Still, Stofan is going to take some time off to go on vacation this month. But she doubts it will be a totally relaxing escape from work, because she'll be sailing with friends in Thailand.

"Every time we turn the sailboat or anchor, I'm going to be thinking about our probe and saying, 'Huh? How does what we're doing right now apply to how the probe's going to behave on Titan?' " she says. "And I'm never going to be able to get it completely out of my head, and in some ways I don't want to. Working on this mission has been incredibly exciting and fun and intriguing."