Accessibility links
Shoe-Throwing Reporter Tells Tale Of Torture Muntadhar al-Zeidi was released from prison Tuesday. The Iraqi journalist, who served only nine months of a three-year sentence, was imprisoned for hurling his shoes at then-President Bush at a news conference last December. 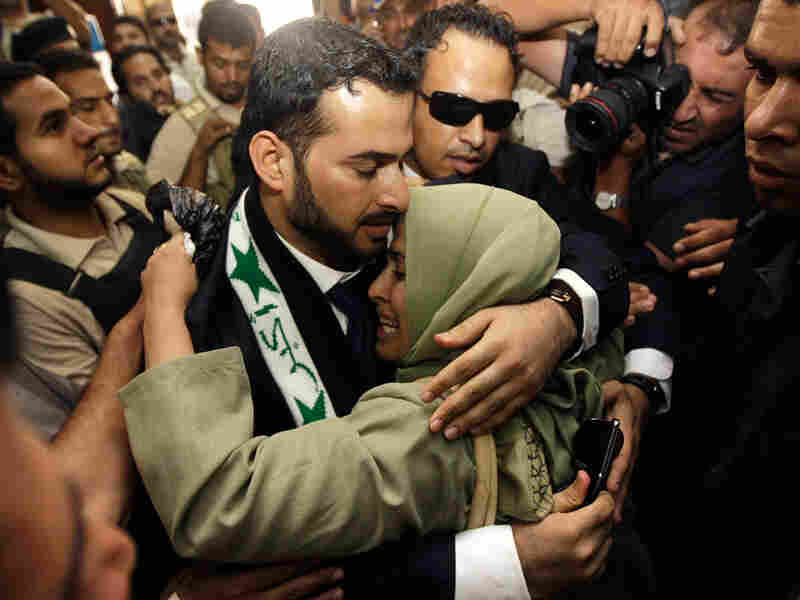 Iraqi reporter Muntadhar al-Zeidi embraces his sister upon arrival at the Al-Baghdadya television station after his release from prison in Baghdad on Tuesday. The reporter who hurled his shoes at then-U.S. President George W. Bush was released from prison on Tuesday, his brother said. Mohammed Ameen/Reuters via Landov hide caption 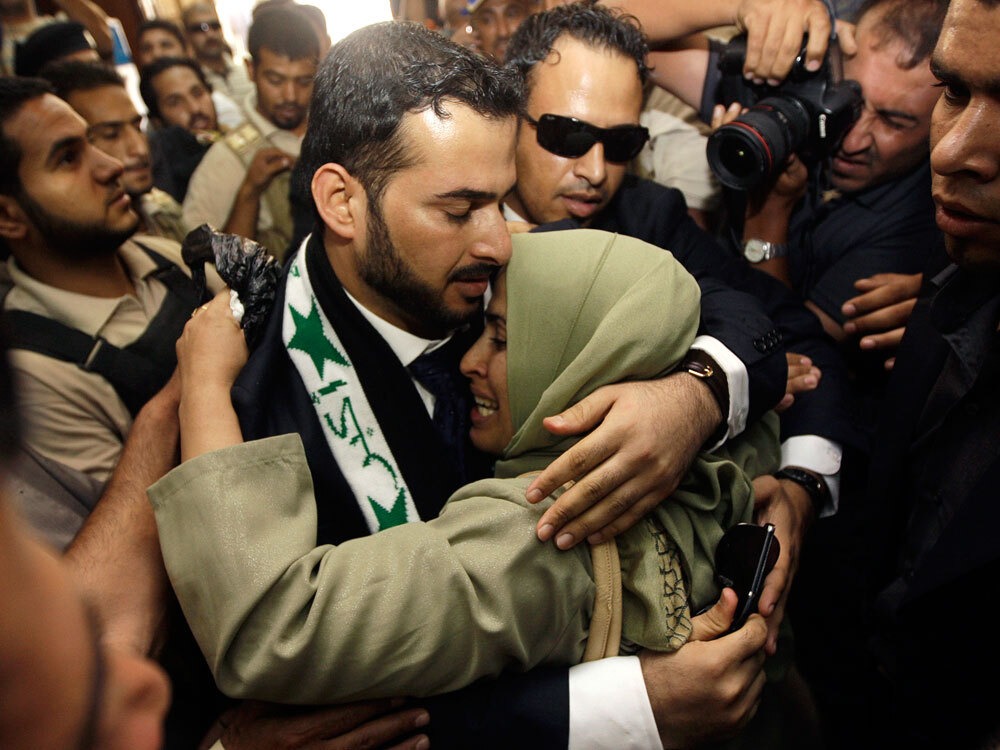 Iraqi reporter Muntadhar al-Zeidi embraces his sister upon arrival at the Al-Baghdadya television station after his release from prison in Baghdad on Tuesday. The reporter who hurled his shoes at then-U.S. President George W. Bush was released from prison on Tuesday, his brother said.

The journalist who threw his shoes at George W. Bush during the president's final visit to Iraq last December was released from prison Tuesday and says he was tortured by Iraqi officials during his incarceration.

Muntadhar al-Zeidi, who served only nine months of a three-year sentence for assault, returned to a hero's welcome at the Baghdad television station where he was working last year.

He claimed that both Iraqi and American forces are still after him and "will spare no efforts to track me as an insurgent revolutionary in a bid to kill me," he told a news conference. His family said he would spend the night in an undisclosed location and then leave the country as soon as possible.

Zeidi was covering President Bush's final news conference alongside Iraqi Prime Minister Nouri al-Maliki. Zeidi grabbed worldwide attention for throwing his shoes at Bush, calling him a dog who was responsible for death and destruction in Iraq.

In his news conference, Zeidi apologized for breaking journalistic rules, but he had no apology for the American president.

"I saw the chance and I took it," Zeidi said, adding that he had walked through so much destruction and innocent blood with those shoes that he felt it was appropriate to throw them at Bush, whom he blamed for thousands of innocent deaths since the 2003 invasion.

Bush ducked to avoid the shoes and was unharmed in the incident, which embarrassed the Maliki government but was cheered by many in the Arab world.

Zeidi charged that he had been beaten in prison by high-ranking Iraqi government officials even as Maliki claimed to be concerned about the prisoner's well-being. Zeidi claimed he was doused with water in a freezing cold cell during winter and tortured with electric shocks. He said that at a later date he would announce the names of those who abused him.

At his Baghdad home, family members watched Zeidi's press conference on television, singing with joy when they saw him appear, looking clean and healthy, though lacking one of his front teeth.

Like many in Iraq, Zeidi's family members consider him a hero who spoke for the entire country in condemning the U.S military presence. But some in Baghdad said they found Zeidi's conduct reprehensible.

"I want the Americans to stay, to keep security here, and at the same time I want them to leave, and to live our lives normally like other countries."