Accessibility links
Houses Of Worship Open Doors To Swine Flu The opportunity to spread the virus abounds in churches, synagogues and mosques. Religious leaders question whether rituals such as drinking wine from the same chalice, passing the Torah and cleansing before prayer need to be altered. 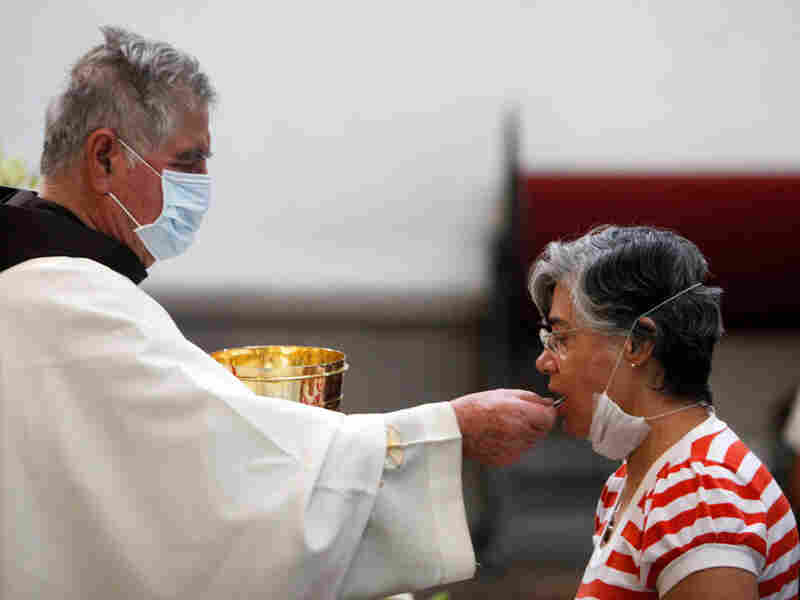 A priest, wearing a mask as a precaution against the swine flu, gives Holy Communion to a parishioner in Mexico City in May. Eduardo Verdugo/AP hide caption 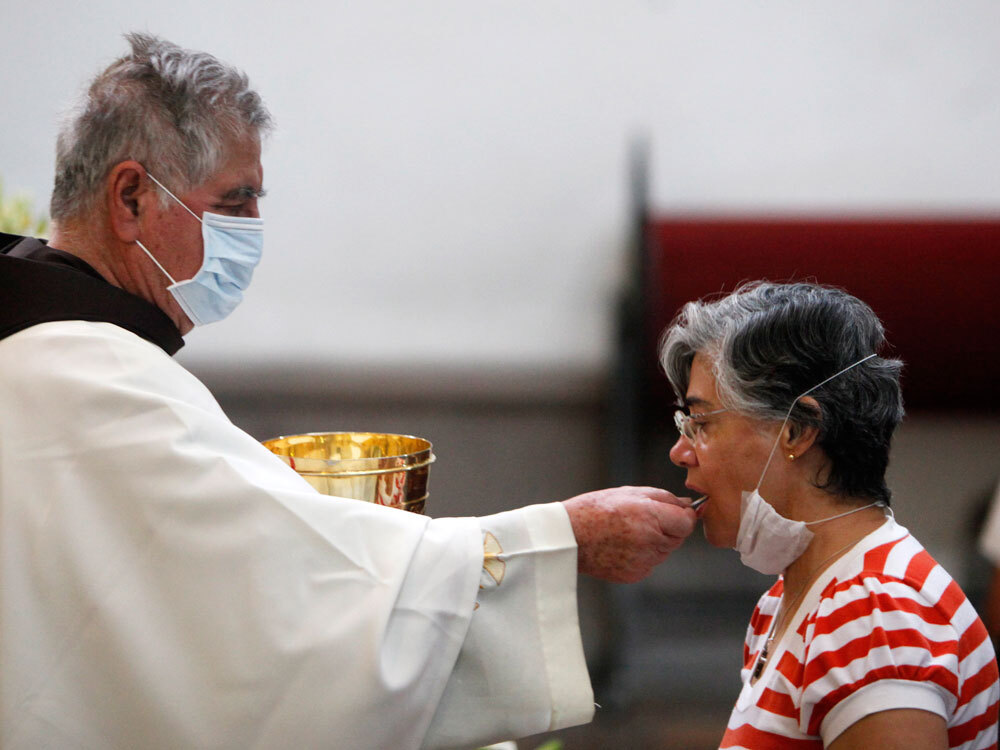 A priest, wearing a mask as a precaution against the swine flu, gives Holy Communion to a parishioner in Mexico City in May.

Through the eyes of the H1N1 virus, a Catholic church is a playground. The font of holy water near the church entrance is a great place for the virus to leap from one person to another.

The passing of the peace, during which parishioners shake hands, is yet another favorite place for the virus.

And then there's Communion: The priest puts the host, or wafer, on a parishioner's tongue or into the person's hand, and then does the same for the next person. Often, he then serves wine from a common cup. It's wiped clean each time, but that's no guarantee it's virus-free.

Bishop Mitchell Rozanski of Baltimore said these rituals have prompted a flood of questions.

"How should we deal with the distribution of Holy Communion?" he said. "Should we stop shaking hands at the sign of peace? Should we take [out] the holy water fonts as soon as the flu season begins?"

Rozanski is asking priests to use lots of hand sanitizer. But the bishop said a word from health officials that a pandemic has started could lead him to shut down churches.

Want to stay safe from the flu, without being a grinch? Check out our slide show for tips

Like Rozanski, Rabbi Moshe Waldoks at Temple Beth Zion in Brookline, Mass., has been thinking about swine flu a lot lately. The High Holy Days begin Friday, and he expects about 900 people at services. He'll ask his congregants to greet each other a little differently this year.

"I'm suggesting bowing to each other with a little Buddhist bow," he said, "or the Obama fist bump could really be very good."

And what about passing the Torah around the congregation? Some people kiss it, while others touch their prayer shawls to it.

"I might say before we walk around with it, 'If you've any concerns about stuff, this year maybe offer a wave instead of a kiss,' " Waldoks said. "I'm sure the Torah will understand."

For Muslims, Friday prayers are the centerpiece of the faith and a potential viral hotbed. Imam Johari Abdul-Malik of Dar Al Hijrah Islamic Center in Falls Church, Va., says 3,000 people come to worship there each week.

If you've any concerns about stuff, this year maybe offer a wave instead of a kiss. I'm sure the Torah will understand.

"They stand shoulder to shoulder. They put their faces on the carpet and remember someone's going to come behind them and prostrate with their face on the carpet," he says.

Malik says that if flu breaks out, the leaders may ask people to bring in their own prayer rugs. The mosque may tell people to spread out more when they pray and amend the ritual cleansing before prayer, in which people visit a special washroom to gargle and wash their feet.

The imam said believers are loath to change these rituals because they're so deeply rooted in the Quran. "How do you now convince them that what they used to do is now not permissible?" he asked.

For example, Malik says, the Quran says that when two believers shake hands in greeting, their sins fall away. Some people may feel cheated of blessing if they have to stop that practice.

"You come to the mosque, and nobody wants to shake your hand, no one's going to embrace you. You're like, 'What's going on? What's kind of place is this? Where are the blessings?' " he said. "And you have to say, 'Today the blessing is in resisting shaking hands.' "