Accessibility links
Mystery Still Swirls Around Alcatraz Escape Three inmates dug a hole in their cells, crawled three stories to the roof, and escaped from the maximum security prison almost 50 years ago. The FBI says the men drowned. But given that they had a raft, life jackets, favorable winds and a big head start, did they survive? U.S. marshals are still chasing down leads. 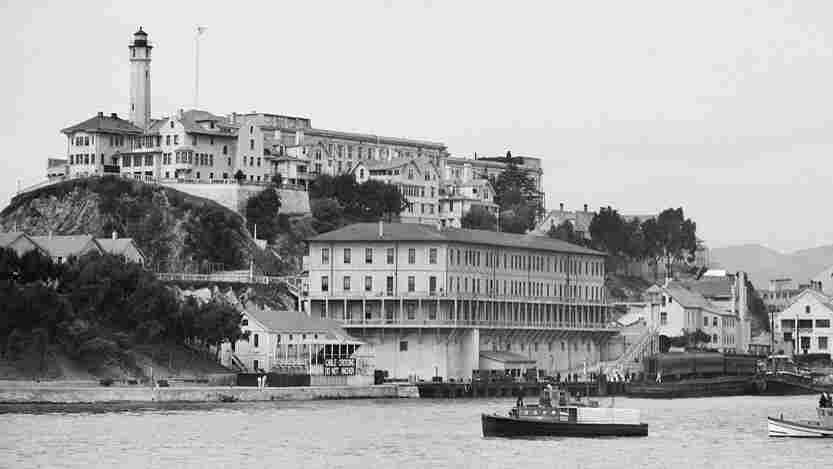 Armored railroad cars delivered prisoners to to the New Federal Penitentiary on Alcatraz Island in the San Francisco Bay in 1934. During Alcatraz prison's 29 years of operation, a motley crew of escape artists attempted to flee the island. Most were drowned or caught swiftly; a few remain missing. AP hide caption

In the corner of a dark bar just up the street from the docks of the San Francisco Bay, Darwin Coon sips a vodka 7 on a bar stool named after him. He's a half-century older than most people in the place, but everyone knows him.

He's a former Alcatraz inmate, and these days, one of only a handful of men still alive who were there the morning in 1962 that Frank Morris and brothers John and Clarence Anglin made their daring escape from the maximum security prison.

Coon was on the early breakfast shift when an officer burst in and hauled him back to his cell.

He wasn't at all surprised. For almost six months, he had helped John Anglin steal tools — screwdrivers, pliers, a pair of scissors. Coon worked in the kitchen, and he says Anglin asked him to break things so a friend of his on the maintenance crew could come "fix" them, and then accidentally leave tools behind. Coon then slipped the tools to Anglin in his cell.

"He was a friend of mine," Coon explains. "Yeah, them two brothers were nice people."

Coon never heard from his friends again. But he has no doubt: They got away.

A lot of people seem to want to believe that, and with some reason: The inmates' plan was painstaking and meticulous.

No one knows that better than U.S. Marshal Michael Dyke, who is still looking for the men. Even a half-century after their disappearance, the marshals still have an active case file because, Dyke says, no one can prove they're dead.

From his office in Oakland, Calif., Dyke spends many afternoons following leads and poring over old evidence photos.

"This is one of the vests that was recovered, and as you can see, it's a decent-sized vest," Dyke says, examining a photo of a green life vest made out of prison-issue raincoats.

Dyke believes Morris was the brains behind the operation. The onetime foster child had been locked up for the most part since he was 14 years old. It was Morris who figured out how to give the homemade raft and life vests an airtight seal.

"You can see there's glue around here, and there's like a wooden mouthpiece," Dyke says, pointing to the lining on a photo of one of the vests. He says they used something similar to shoe repair glue and then sealed the seams with heat from steam pipes.

The vests and raft were only part of the plan. The men made lifelike dummy heads that they put on their cots to fool the guards, chiseled their way out of a hole in the back of their cells and squeezed through a utility corridor until they reached the roof. They then slid down a water pipe and ran down to the shore.

In the days after their disappearance, officials found several of the vests — one in the bay, one in the ocean and one left behind on the roof with a spare raft. The FBI tested all of them. All appeared able to float for many hours — plenty of time to make it to Angel Island, their destination two miles north, according to an inmate who stayed behind.

Dyke also ran his own tests. He asked the Coast Guard to run a simulation. It showed the men could have survived the cold bay water for at least 2 1/2 hours if the boat failed.

Dyke says a paddle was recovered near Angel Island. There was also an unconfirmed report of a raft on the island. And the wind was blowing in that direction. Plus, Dyke says, there are a few other things the men had in their favor, including an 8- to 10-hour head start.

"If they were able to steal a car, even though there was a nationwide manhunt, there's all kinds of roads they could be on where they would never have been seen," Dyke says. "The other possibility is they could have went out of the country, too."

The FBI has long held that the men drowned, consumed by the frigid temperatures of the San Francisco Bay. They point to a Norwegian shipping freighter whose crew spotted a body in the Pacific Ocean six weeks after the escape. Despite having two phones on board, the crew never called it in. They didn't even report the alleged sighting for months.

Regardless, the assistant director of the Bureau of Prisons told the press at the time: "The tides and winds that night were strong. Only a trained athlete could make such a swim."

That may not necessarily be true.

Devon Mecham, 14, was one of about 600 people to swim to San Francisco from Alcatraz in July as part of a race called the Alcatraz Challenge.

"Anyone can do this," Mecham said. "It's just scary to get in. A guy in a wheelchair did it."

Some of the swimmers wore wetsuits; some, just swimsuits. Some swam it for the third time, like Devon's father, James Mecham.

"I think it's highly likely that people could swim that," James Mecham said, his lips chattering from the cold. "That was just for fun. If I was swimming for [my] life? If this was my life on the line? Doesn't seem like it would be that tough."

With so much in the inmates' favor then, it's not hard for Dyke to come up with leads to follow.

He recently fingerprinted a man in Delaware who matched Clarence Anglin's description. He chased down a story about a tavern owner in Florida who allegedly sent a boat to Alcatraz the night of the escape. And he has interviewed dozens of people in Georgia, where the Anglins were from; some family members say the men are alive, and sightings seem to be frequent.

But, after all these years, all of it has come to nothing.

The strongest lead may be this: In half a century, there has not been one single, credible piece of evidence that Morris and the Anglin brothers ever set foot on dry land — even for an hour.

"To this date, [there's] nothing concrete that they're alive or that they even made it," Dyke says.

Which brings Dyke back to the one question he started with: Could three career criminals with no money or resources, who could never stay out of trouble for more than a month, really have spent the past 50 years in hiding, without even being suspected of a single crime?

And all the lab tests and water simulations in the world are not the San Francisco Bay. On a recent afternoon on Alcatraz, just above the prison courtyard where Morris and the Anglins surely stood and studied their route to freedom, you can see the tides moving so swiftly they look like a river in an ocean.

The water temperature was 54 degrees on June 11, 1962, when the men escaped. With the spring snow melt and strong nighttime tides, water would have been barreling out of the bay as fast as 6 knots.

"Sometimes I hope they did escape because then I can catch them," Dyke says with a little chuckle.

But he says what he really wants is an answer. Any answer.

"I'd be pretty relieved because I can go on to other things if I can prove it," he says, looking at the stacks of files and photos piling up on his desk. "Whether that ever happens or not is more and more doubtful as years go by."

Frank Morris would be 83 this year. John Anglin would be 79; his brother, Clarence, 78.

Eventually, Dyke will be sure they are dead — as they may have been all along — having taken with them any chance of finding out what happened the night three men escaped from the country's only escape-proof prison.