Accessibility links
Damon And Soderbergh Team Up And Inform After working together on the films Ocean's 11, 12 and 13, actor Matt Damon and director Steven Soderbergh teamed up together again on the new film The Informant!, a dark comedy about a rising corporate executive at Archer Daniels Midland who blows the whistle on price fixing. 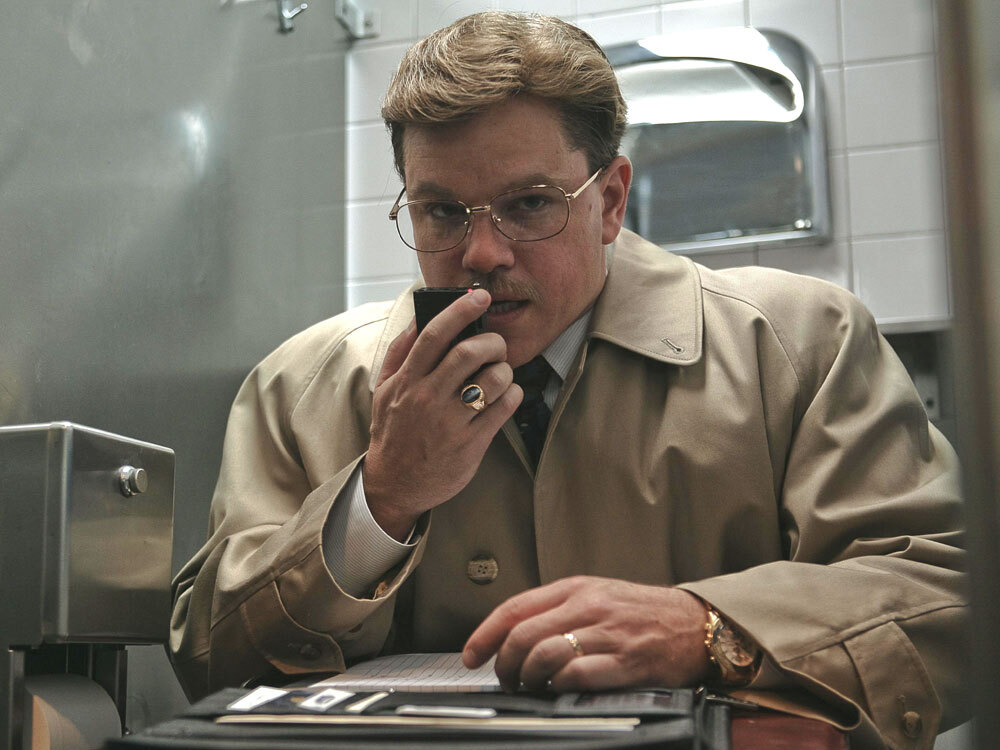 Matt Damon funnels secret information to the FBI in The Informant!, a black comedy directed by Steven Soderbergh.

'I Can't Provide You With Immunity'

After working together on the films Ocean's 11, 12 and 13, actor Matt Damon and director Steven Soderbergh teamed up again on the new film The Informant!, a dark comedy about a rising corporate executive at Archer Daniels Midland who blows the whistle on price fixing.

Damon stars as Mark Whitacre, a not-always-reliable whistleblower who is intoxicated by the idea of being a corporate spy — even though he sometimes unknowingly bungles the job. The actor says the role was a definite shift from some of the more debonair characters he has played in the past.

"It was a lot of fun. It was the opposite of doing the Bourne movies," Damon tells Terry Gross.

Based on a true story, the film was adapted from Kurt Eichenwald's nonfiction book, also called The Informant. But unlike the book, which is a straightforward piece of investigative journalism, the film takes a lighter, more ironic tone.

Soderbergh says the shift in tone was a deliberate choice:

"When the book reached us in 2001, I'd recently finished Erin Brockovich, and Michael Mann's The Insider had come out in 1999. I think our sense was we needed to do something different, that just taking the standard approach wasn't really going to be exciting or fresh," he says.

Soderbergh decided to make the film as a black comedy — a choice that ultimately affected the way Damon prepared for the role. For one thing, he decided not to meet Whitacre, the man he plays in The Informant! .

"Once Steven made the decision to shift the tone, it became unnecessary to meet Mark, and kind of inappropriate to meet him," Damon says. "I actually have another movie coming out in a few months where I play a real person, and I prepared for the role completely differently and spent a lot of time with the guy. ... It was more about the tone of this movie that kind of determined how I'd prepare for it."

Playing Whitacre required Damon to transform himself physically. He gained about 30 pounds, wore a wig and mustache, and was fitted for devices that transformed his nose and cheeks — all of which helped him step into the character.

"When your body changes, and you feel clothes hitting certain parts of your body they don't normally hit, and it just affects everything. It's like a kind of a way to immerse yourself into that other guy," he says.

Damon says he typically "geeks out" preparing for roles, but tries to remain in the moment once the cameras start filming. Soderbergh agrees with that approach.

"This sounds terrible — I don't want [actors] thinking. I want them just behaving the way the character would," says the director. "It's been my experience that when you can give an actor practical things to do, physical things to do, that that really helps them lock into the character. I really don't like to engage in philosophical conversations while we're shooting, because I feel like it puts them in their head, and I don't want them in their head."

Damon says he loves working with Soderbergh. He adds that the best directors don't give any more instruction than an actor needs: "I have such trust in somebody who can give me a perfect piece of direction that doesn't bog me down, that doesn't take me out of it but just basically is utterly helpful."

In The Informant!, there's a scene where his character apologizes to the community. Damon first played the scene in a deeply heartfelt manner, but Soderbergh suggested he re-tape it as if he were accepting an award.

"I knew that part of [the character] liked standing up and having everyone look at him and listen to him," says the director. "So I wanted to have a sense of that, of the pleasure of that, and it contributes to the fact that he's often disconnected from the context in which he's operating."

For his part, Damon says it was "brilliant direction."