Accessibility links
Wizard Wannabes: 'Potter' Park To Open In Spring "Harry Potter and the Forbidden Journey" isn't a new J.K. Rowling book or film. It's a ride — or, rather, it will be when the "Wizarding World of Harry Potter," a section of Universal's Islands of Adventure theme park, opens in Orlando, Fla., next spring. 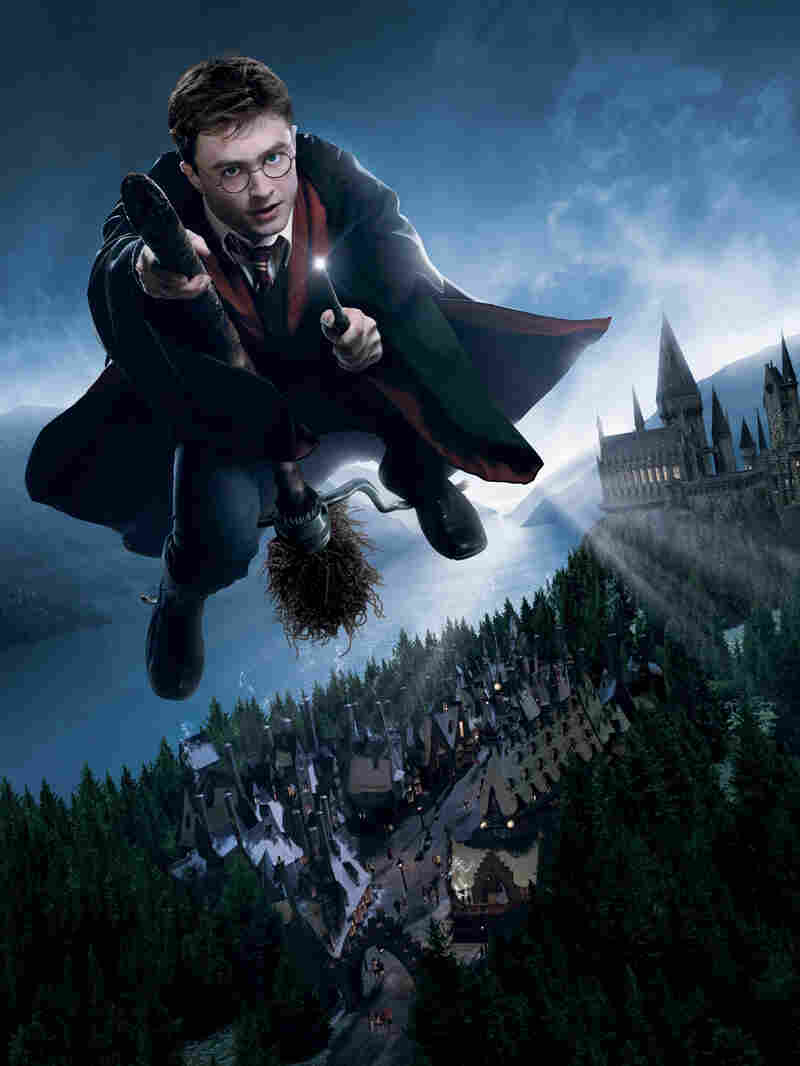 Universal Studios says the Wizarding World of Harry Potter will bring the wonder and magic of the books to life. Courtesy Universal Orlando Resort hide caption 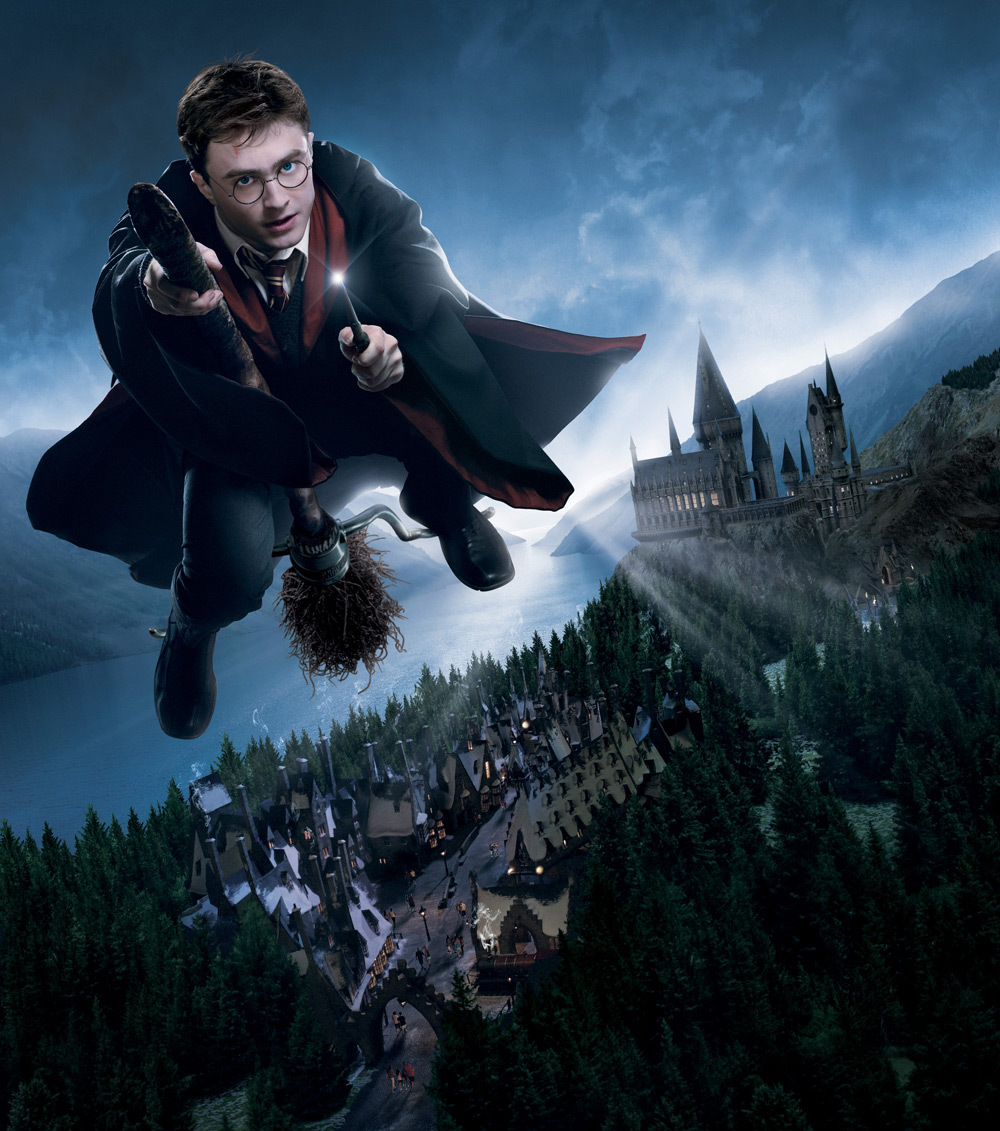 Universal Studios says the Wizarding World of Harry Potter will bring the wonder and magic of the books to life.

It's called "Harry Potter and the Forbidden Journey." But it's not a new J.K. Rowling book or film.

It's a ride — or, rather, it will be when the "Wizarding World of Harry Potter," a section of Universal's Islands of Adventure theme park, opens in Orlando next spring.

On Tuesday, Universal unveiled new details about the Harry Potter park — which comes as the theme-park industry is looking for ways to lure back visitors.

"I've never heard or seen anything like this before. I think it's going to be completely unprecedented," said Emma Watson, who plays Hermione Granger in the Harry Potter films.

Watson only appeared on tape, although Tom Felton, who portrays Draco Malfoy, did turn up in person at Tuesday's news conference — which was more of a promotional webcast aimed at building interest in the world's first Harry Potter theme park attractions.

Using a specially designed version of Harry Potter's "Marauder's Map," producer Paul Daurio described what visitors will see when they arrive: "As you enter the Wizarding World, you first come upon Hogsmeade station. To your left, you pass Zonko's, the joke shop, and Honeydukes, the sweet shop, where you can purchase an array of jokes and gags and sweets, including chocolate frogs and Bertie Bott's."

Universal's news was that the Wizarding World will open in Orlando next spring — although that's a pretty vague timetable for families trying to make travel plans. It's reported to be a $200 million-plus project that covers 20 acres and that will feature three main rides — or "attractions," as they call them in the theme-park business. 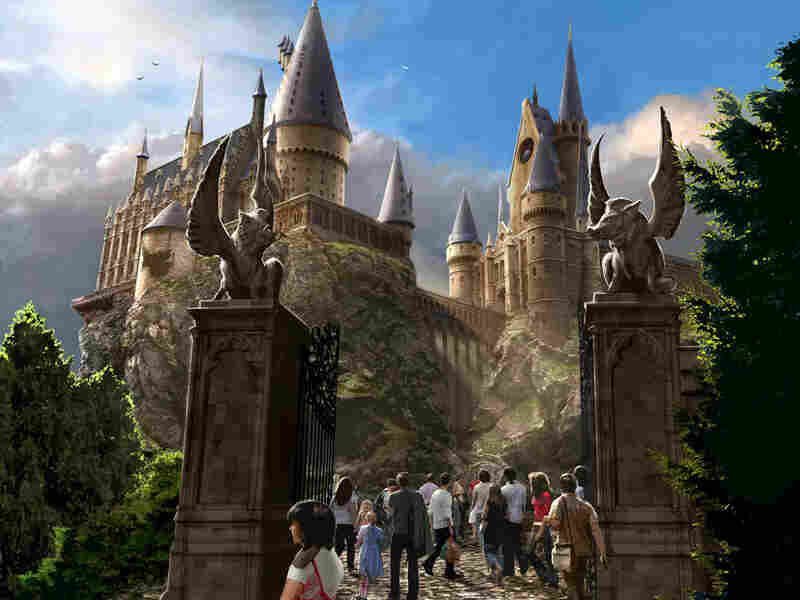 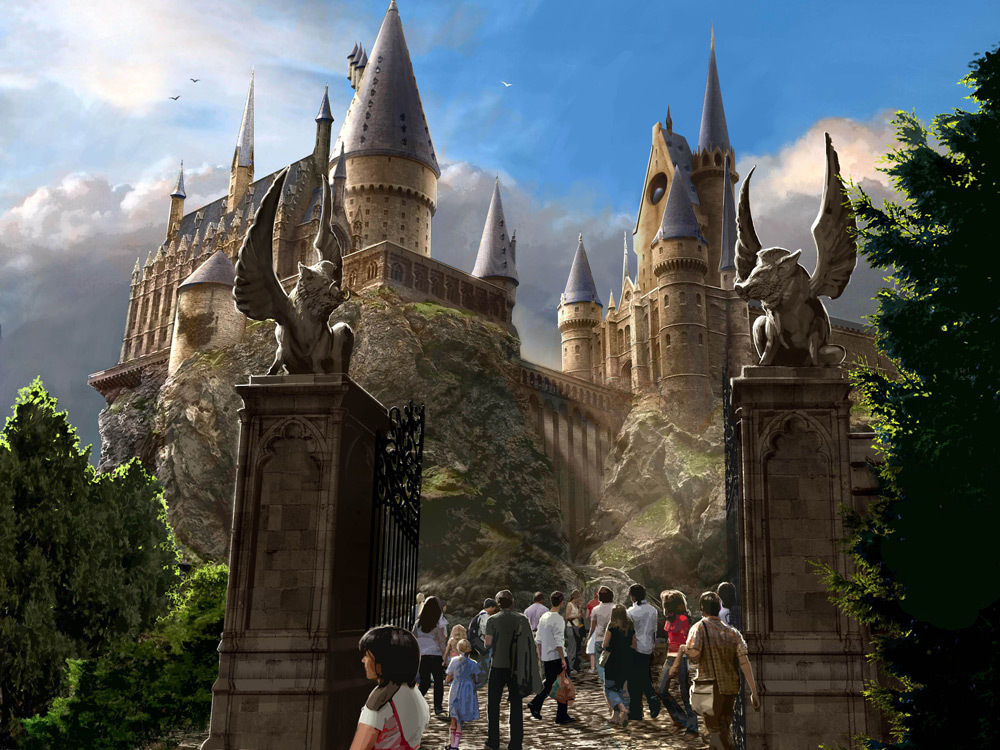 A rendering of Hogwarts Castle.

Universal Creative President Mark Woodbury said that, for fans of the boy wizard, much of the appeal will be in the place itself — the shops, streets and scenes created by Rowling and made iconic in the Harry Potter movies. He calls it an authentic "immersive environment."

"That extends all the way through Hogsmeade with the Three Broomsticks, and Ollivanders and the Hog's Head Pub. You know, really go into these iconographic moments in the movie and turn them into real experiences," he said. "That's really, you know, the great challenge for us."

Gilmore says the challenge is very different from building a movie set. Instead of plywood and Styrofoam, he's working with stone and steel, creating structures that not only look authentic, but that also can stand up to thousands of visitors each day.

He says the most impressive part of the Wizarding World will be Harry's school, Hogwarts.

"It's going to be the Parthenon of Orlando, I think," he said. "It'll be the great big temple which people will want to come and visit. It's going to be a real edifice, aged to look like it's been there a thousand years."

Gilmore said the castle will be an "extremely different kind of castle from the Disney castle. It'll be a much more European, very real, based in fact." 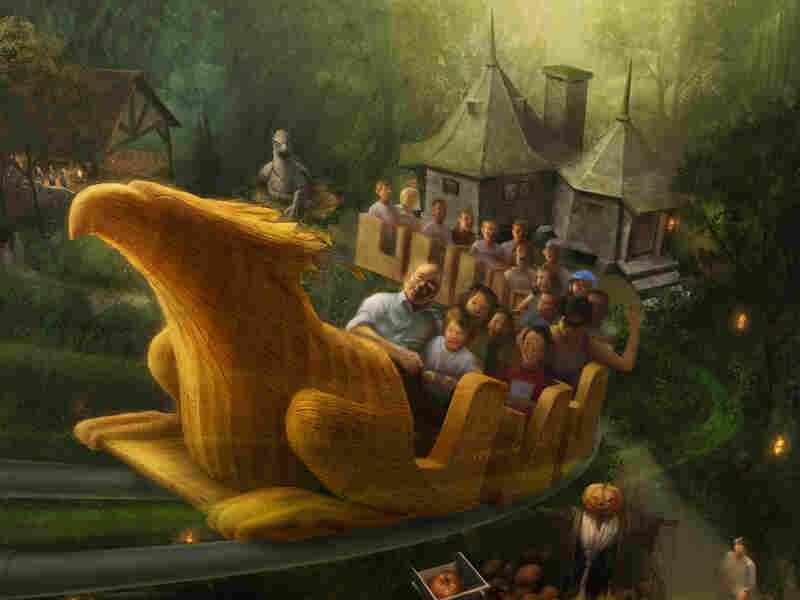 An early conceptual rendering of Flight of the Hippogriff — a family coaster simulating a Hippogriff training flight over the grounds of Hogwarts Castle. Courtesy Universal Orlando Resort hide caption 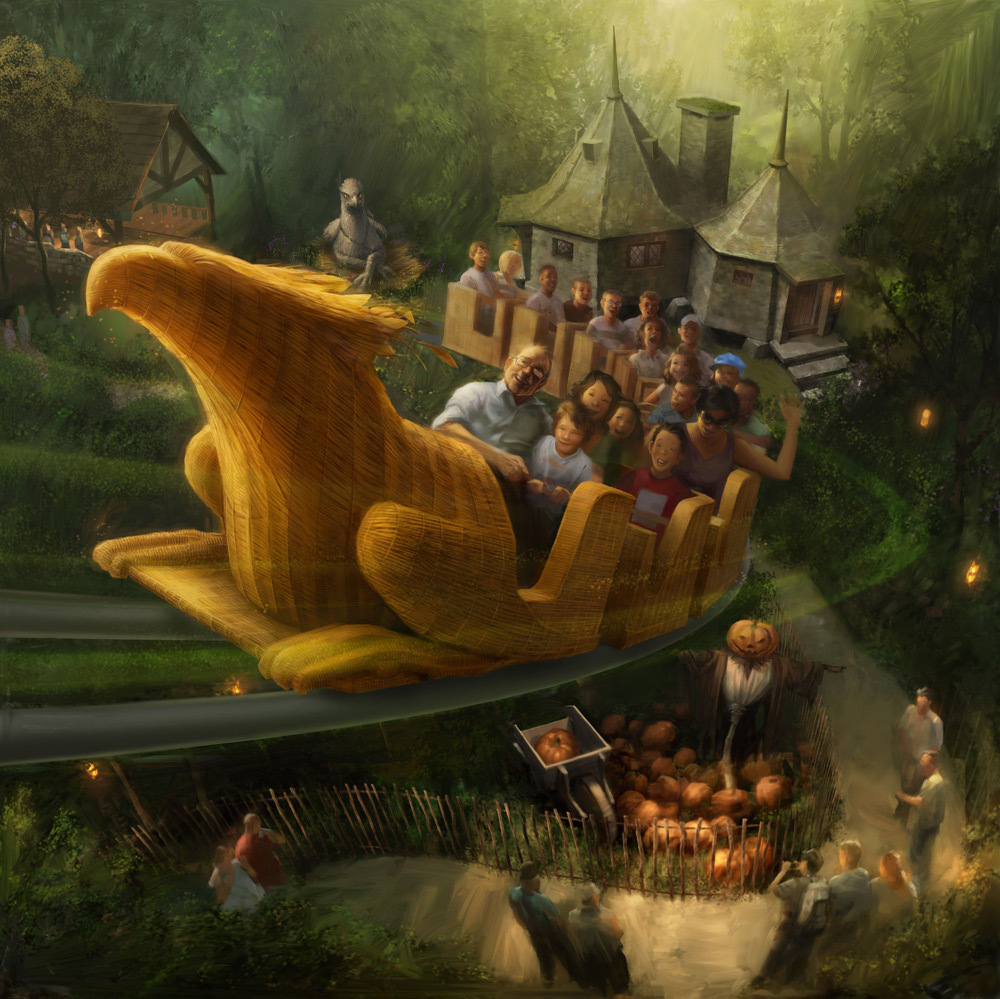 An early conceptual rendering of Flight of the Hippogriff — a family coaster simulating a Hippogriff training flight over the grounds of Hogwarts Castle.

Keeping up with Universal, Disney just announced plans to rework the Magic Kingdom in Orlando. Disney is adding a Little Mermaid attraction and building areas that will focus on heroines like Cinderella and Sleeping Beauty.

Robert Niles, founder and editor of the Web site, Theme Park Insider, says, "It doesn't have quite the cross-generational appeal Harry Potter does. But, Disney princesses are an extremely powerful franchise [that has] a lot of fans. And Disney connects with a lot of people. And I think it's going to be quite successful for them, once it's open."

That won't be until 2013, which means in Orlando, next year could belong to Universal and its main attraction, "Harry Potter and the Forbidden Journey." The company won't say much about the ride, except that it will sweep visitors along a journey that captures experiences from the books and films.

Niles says it's expected to be an innovative ride that's already created a fair amount of industry buzz.

"It is code-named within the developing community as 'Project Strongarm' because they are using robot arms," he said. "If you've ever seen pictures of an assembly line when they have those robot arms coming in and fixing the cars — well, just bolt a row of four seats to the edge of one of those. And, you've got these robot arms which are going to be placed on an elevated track going through the Hogwarts Castle."

For Universal, the opening of the Harry Potter section next spring comes at a good time: The recession has been tough on theme parks and Harry Potter is expected to help boost attendance.