Accessibility links
Talk Radio Hosts Demand Immigration Enforcement A two-day conservative talk radio marathon is wrapping up in the nation's capital taking on the topic of illegal immigration. The "Hold Their Feet to the Fire" radio-thon is featuring more than 40 conservative talkers. Two of the event's presenters, Armstrong Williams of XM Radio and Roger Hedgecock of KOGO in San Diego, discuss and their strategy. 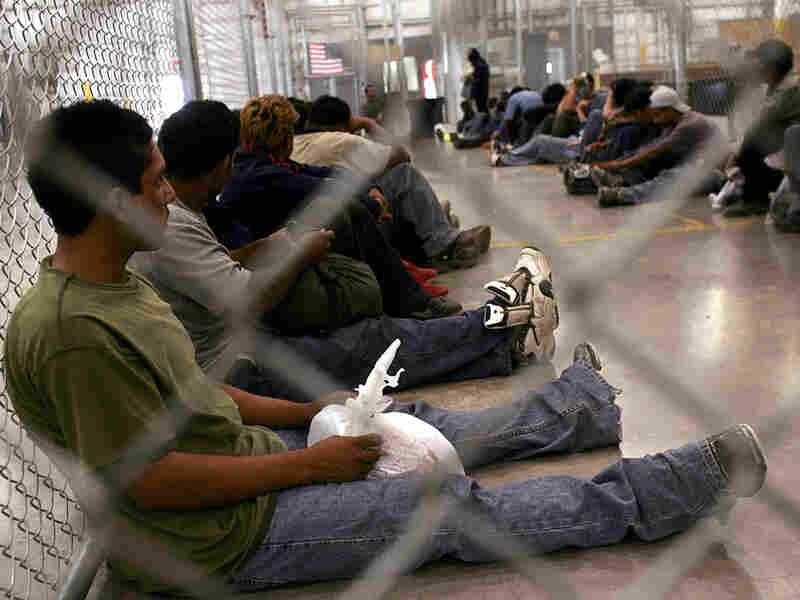 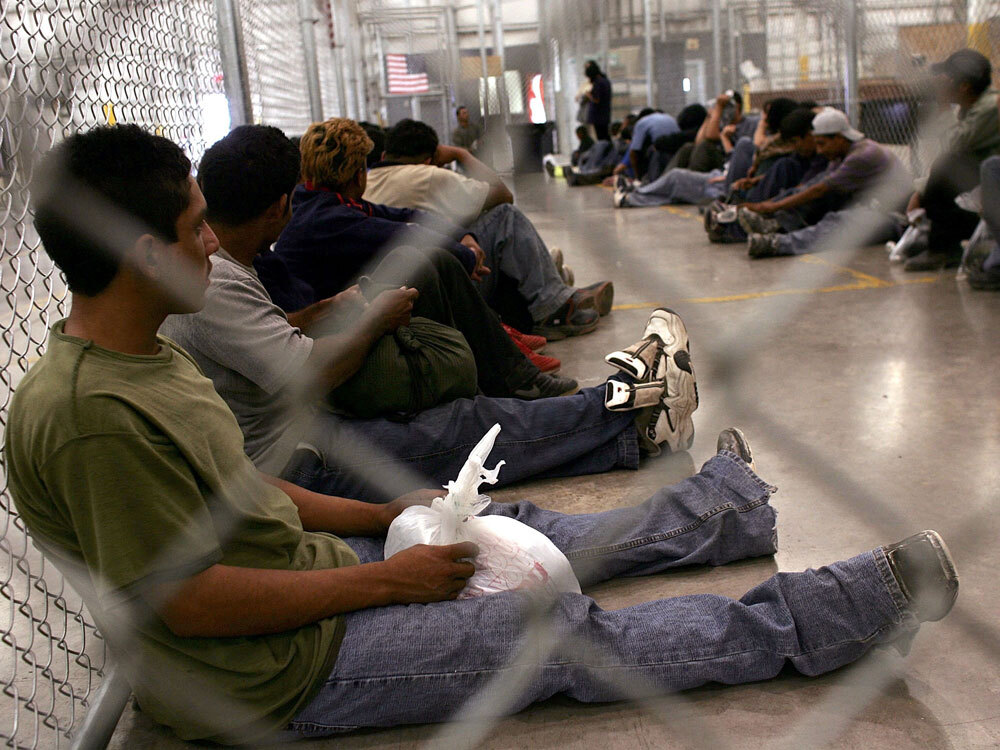 Men caught crossing the US-Mexico border illegally are detained in a holding cell in Arizona.

More than 40 conservative talk radio hosts from across the country are gathered in the nation's capital to pressure Congress and the Obama administration to slam the door on illegal immigrants.

The annual two-day radio-thon, titled, "Hold Their Feet to the Fire," includes popular conservative hosts like Lou Dobbs. The broadcast focuses on the larger issue of illegal immigration, but will specifically address the recent debate over whether this population will benefit from President Barack Obama's health care plan.

Conservative talk show host Roger Hedgecock is a sponsor of the conference.

"The illegal immigration issue has caused our schools to be in a death spiral, our prisons to be overcrowded," Hedgecock told NPR host Michel Martin in a recent interview. "Making nine or 10 or 12 million people eligible for subsidized health insurance at a time when we're having difficulty extending that to American citizens and legal immigrants ... just compounds the problem."

On The Heels Of Rep. Wilson's Outburst

In an address to a joint-session of Congress on Sept. 9, Obama said his plans for health care reform would not extend coverage to illegal immigrants. This was immediately decried by Rep. Joe Wilson, a Republican from South Carolina, who shouted from the chamber "you lie" to the president. The outburst continues to stoke a fierce debate about Wilson's conduct, but also about whether any reform plan will actually benefit those in the country illegally.

"[To] have a total disregard for the rule of law in this country and still be rewarded for it, especially by getting benefits, is just utterly not who we are as Americans," Williams said.

Conversation with President of La Raza

Some denounce such attitudes against illegal immigrants, including the outburst by Joe Wilson, as racist. The Federation for American Immigration Reform (FAIR) is one of the event's sponsors. According to the Southern Poverty Law Center, FAIR has known ties to white supremacists and a long history of race-based conspiracy theories.

Hedgecock denies such claims, arguing that the true racists are civil rights organizations like The National Council of La Raza that advocate for Latino rights. Comparing the group to the Ku Klux Klan, Hedgecock says one group is not entitled to a set of rights — like health insurance — just on the merits of their race or ethnicity.

"You can cry racism," said Williams, who is African-American. "But it cannot take away from the legitimacy of this issue that these illegals will eventually devastate this economy."

Senate Finance Committee Chairman Max Baucus, a Democrat from Montana, put forward a health care bill on Wednesday. That committee could vote on the bill as early as next week.