Accessibility links
'Chance Of Meatballs' Puts Fun In The Forecast The animated 3-D adaptation of the 1978 children's book Cloudy With a Chance of Meatballs serves up a lot of laughs, as well as some food for thought. Critic Bob Mondello says the script is chock-full of wit, with some real-world crunch to boot. 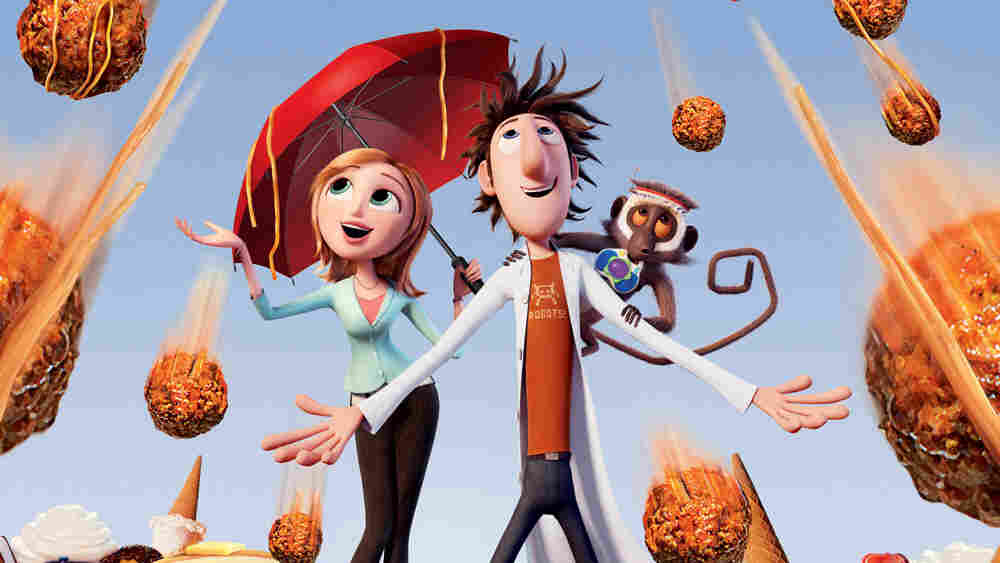 A Delectable 3-D Downpour: After countless failed experiments, a scientist seeking to solve world hunger gets a little more success than he bargained for when he figures out how to turn water into food. Sony Pictures Animation hide caption

Cloudy With a Chance of Meatballs

Rated PG: Brief mild language ... of the sort you'd expect to hear if you saw a meatball fall from the sky

Wondering how the town of Swallow Falls got to be a place where it rains soup and snows mashed potatoes? Well, Judi and Ron Barrett didn't tell you in their 1978 children's book, Cloudy With a Chance of Meatballs. But it turns out, in a 3-D film that's more or less an animated "origins" story, that a teen inventor named Flint Lockwood is responsible.

When Flint (voiced by a very funny Bill Hader) was an adolescent, he invented lots of things that didn't work quite the way he'd hoped: spray-on shoes that he couldn't take off, or a remote-controlled TV with legs that came to you when you wanted to change the channel, except that it often wandered out the door instead. By the time he was in his teens, he'd come up with a monkey thought-translator for his pet monkey, Steve (Neil Patrick Harris), which would've proved more useful if monkeys had more complicated thoughts. Then there were the rat-birds, which... well, rat-birds just aren't a very good idea.

Still, his latest invention — a machine that turns water into food — seems to have possibilities, even if Flint's unibrowed dad (James Caan) can't see them. Alas, an extra jolt of electricity sends the machine rocketing past Sam (Anna Faris), a cute weather forecaster on her very first broadcast, and into the stratosphere before Flint can figure out whether it actually works.

He gets his answer when a pickle falls from the sky, followed by cheese, followed by a storm of cheeseburgers.

The machine not only works, but once Flint learns to control it, he can take special requests, from soup to nuts. Which makes him pretty popular — and doesn't hurt the weather forecaster's career, either; she's fond of puns and starts talking about "meatier showers."

That's just a taste — sorry, puns are all but unavoidable with this picture — of the script's wit. Filmmakers Phil Lord and Chris Miller also make amusingly sharp visual jokes, from the child-inflected lab in Flint's backyard (its airlock is a painted shower curtain, its instruments repurposed toys) to a veritable feast of food metaphors: Jell-O as trampoline, a twisting tornado of spaghetti, an avalanche of sherbet. (The animators have the good sense to realize that if it were ever to snow ice cream, kids would almost certainly make snow angels lying face down.) 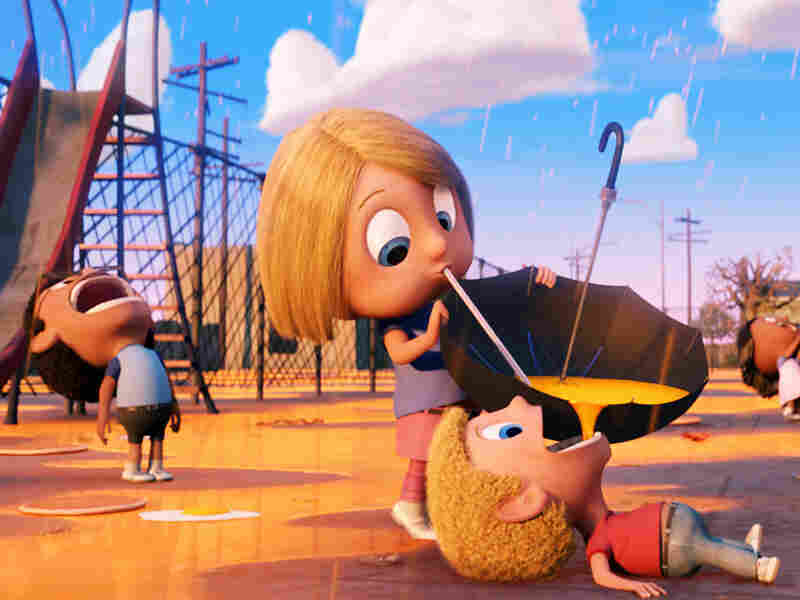 Better Than A Snow Day: There's plenty of high-fructose sweetness as orange juice and ice cream fall from the sky. But the filmmakers also hint at the serious real-world issue of overabundance in a society that loves to consume. Sony Pictures Animation hide caption 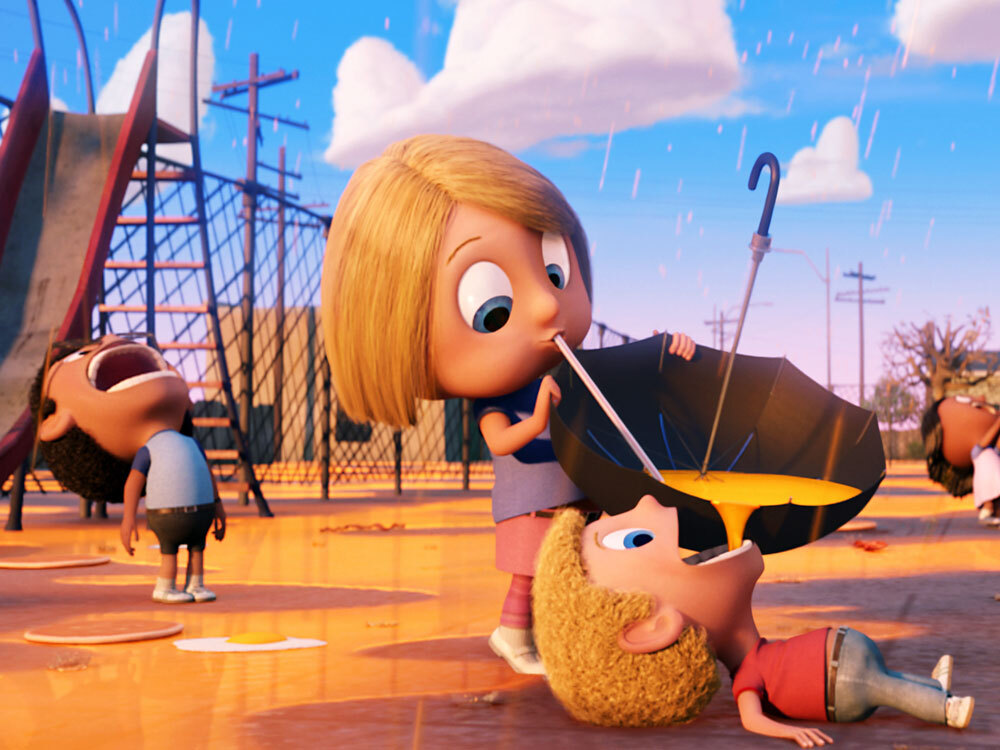 Better Than A Snow Day: There's plenty of high-fructose sweetness as orange juice and ice cream fall from the sky. But the filmmakers also hint at the serious real-world issue of overabundance in a society that loves to consume.

All of which could easily turn sickly sweet, so it's nice that the film brings some real-world crunch to the story — ethnic characters whose presence make a social point, a weathergirl smart enough to bridle at being dismissed as eye candy, and a clear message about the downside of a society where food is overabundant.

Like most mainstream pictures these days, Cloudy With a Chance of Meatballs ends with a big action sequence, turning into Raiders of the Lost Arby's when you wish it would serve up something less conventional. But by that time, the filmmakers have also served up a little food for thought, along with a lot of laughs.