Accessibility links
To Casket Or Not To Casket? : Krulwich Wonders... Bernd Heinrich, one of America's great field biologists, talks with NPR's Robert Krulwich about what to do with our bodies after we're dead. Is it better to be buried, "beetlized," or frozen solid and shattered into a million pieces?

One Of America's Great Field Biologists Thinks About Burial

Bernd Heinrich knows his way around the woods. He has been studying beetles, caterpillars, moths, ravens, beetles, geese, bees, trees, beetles, and crows for years (and yes, I know I've mentioned beetles more than once, but so does Bernd and so does anybody who looks closely at living things in the forest).

In his most recent book, Summer World, he tells the story of a letter he received that involves this beetle, the one you see tucked next to the dead shrew, below: 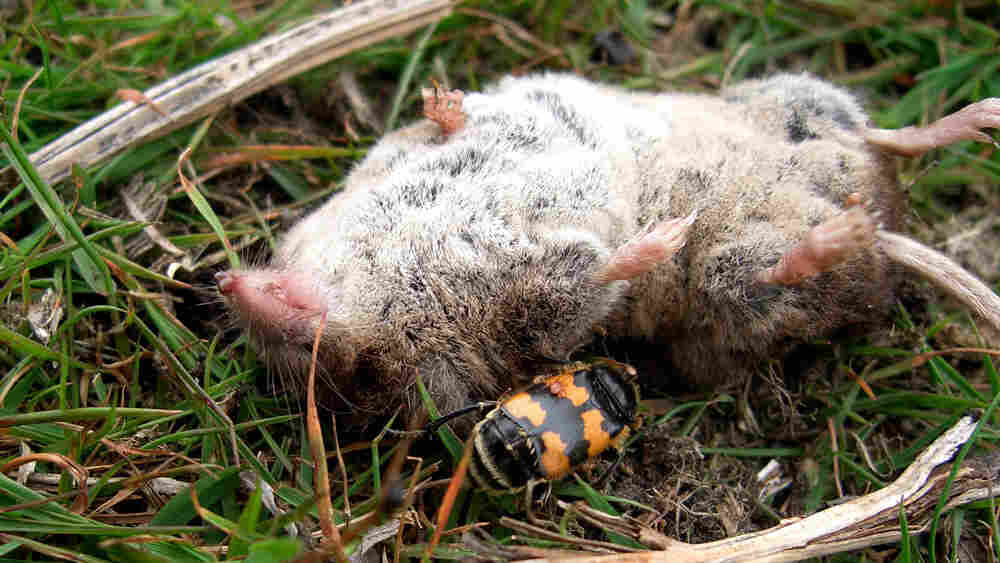 This is a sexton, or burying beetle. It's a little critter, about the size of a bumblebee, and it can (and will, with the help of a mate) take that much bigger and very dead shrew and get it very quickly underground.

Heinrich explains how these beetles (they work in mom and pop teams) manage to find, lug and inter corpses many times their weight and size. Burial beetles are, says professor Heinrich (who for years taught at the University of Vermont), "the undertakers of the small animals in the forest." And thereby hangs a tale.

A few years ago, Heinrich got a letter from a friend, a former student in California. The young man wrote this:

"I've been diagnosed with a severe illness and am trying get my final disposition arranged in case I drop sooner than I hoped ... Like any good ecologist, I regard death as changing into other kinds of life. Death is, among other things, also a wild celebration of renewal, with our substance hosting the party." 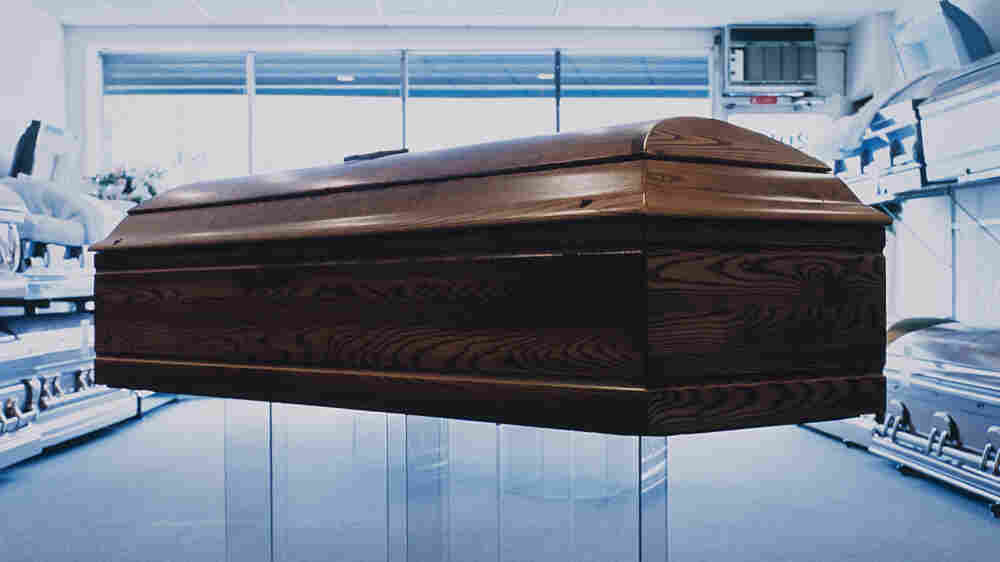 A coffin on display in a showroom. Amy Eckert/Getty Images hide caption

But, wrote the student, if you put yourself in a casket that "seals you in a hole," you're cut off from all the creatures that nourished you when you were alive, the plants, the worms, the fruits, the animals. That, to the student, seemed a little selfish.

And so the student decided instead of a casket burial or cremation, he asked if it would be OK to be shipped to Heinrich's beautiful mountainside property in Maine (where he had done fieldwork) and be given a shallow burial where he could be recycled by nature's most commonplace undertakers. He wanted to be "beetleized."

"I Shall Be Borne, Beetle By Flying Beetle..." 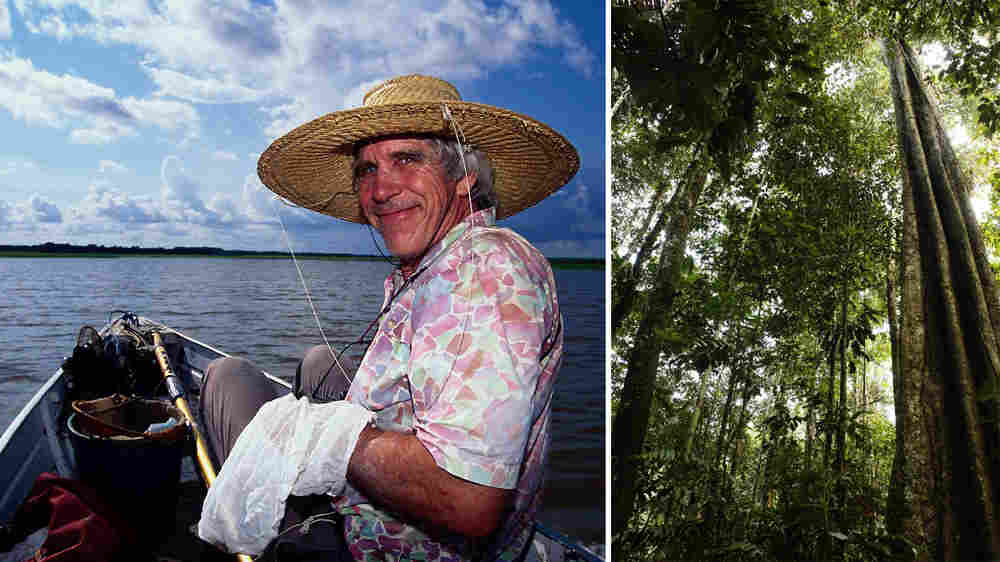 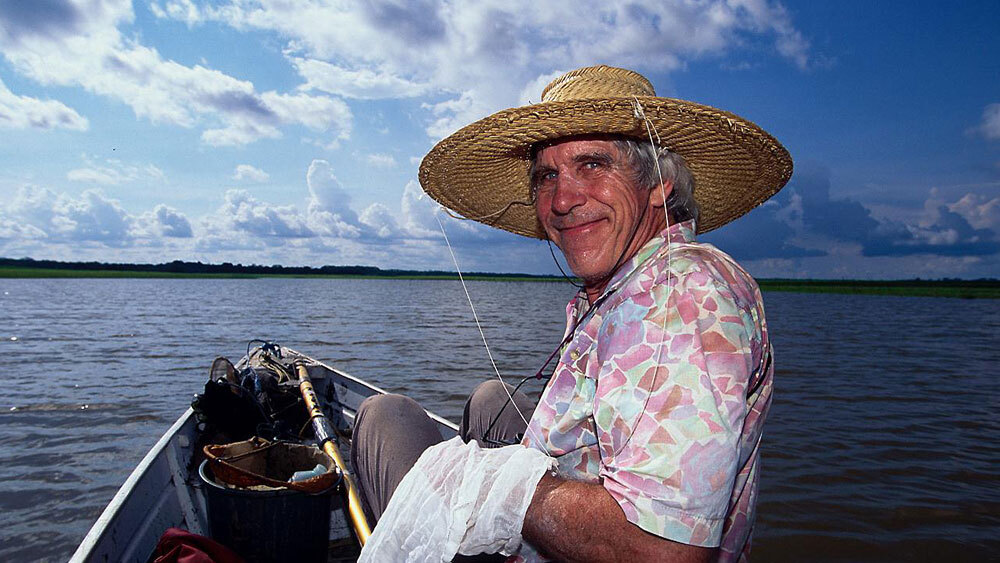 Biologist William D. Hamilton and the Amazon forest that he loved.

This wasn't a crazy notion. Ecology-minded scientists often discuss how they want to be buried.

William D. Hamilton, perhaps one of the greatest biologists in the 20th century, famously wrote an open letter saying that when he died he wanted to be laid out on the forest floor in the Amazon jungle.

He said he hoped to be buried by burial beetles so that:

"... later, in their children, reared with care by the horned parents out of fist sized balls moulded from my flesh, I will escape. No worm for me, or sordid fly; rearranged and multiple, I will at last buzz from the soil like bees out of a nest -- indeed, buzz louder than bees, almost like a swarm of motor bikes. I shall be borne, beetle by flying beetle, out into the Brazilian wilderness beneath the stars."

An Excerpt Of Pete Seeger Singing "In Dead Earnest"

Hamilton did not get his wish. His partner buried him in Britain in a patch of forest called the Wytham Woods. And Heinrich's student -- who is still very much alive -- was told that his wish was a touch impractical and quite possibly illegal.

I asked Heinrich whether he has any plans for his own burial, and for fun I played him the Lee Hays poem "In Dead Earnest," performed by Pete Seeger, that jokes:

All that I am will feed the trees

And little fishies in the seas.

When radishes and corn you munch,

You may be having me for lunch ...

Heinrich giggled and admitted that when his time comes he might avoid a casket, or at least a solidly sealed up one, and hopes to be "recomposed" -- he doesn't like the word "decompose," preferring to think of himself as rejoining the world rather than falling out of it.

"I try to connect," he writes in his book. "The coffin is a last attempt to place a boundary between ourselves and nature." He rejects those boundaries. He wants the connection. 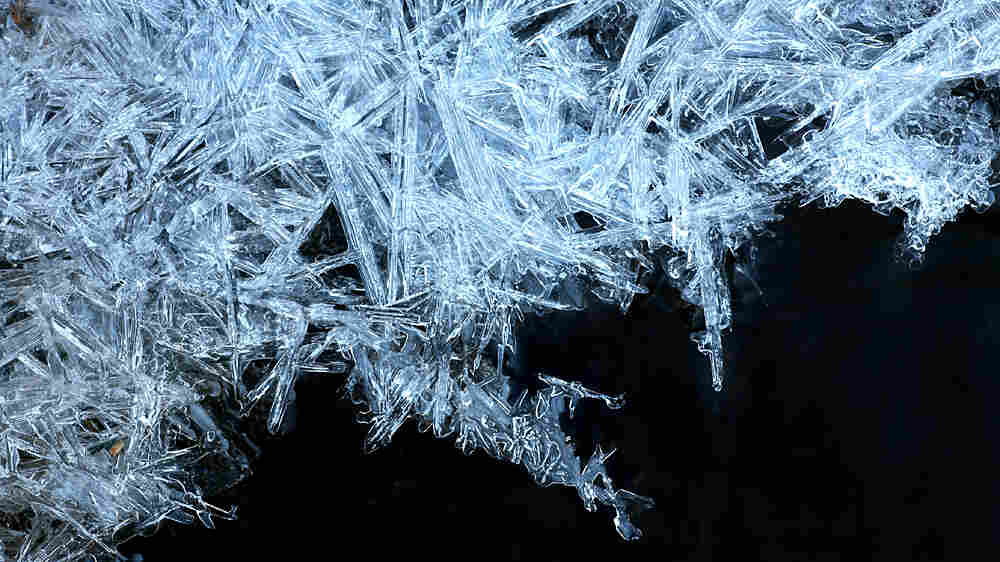 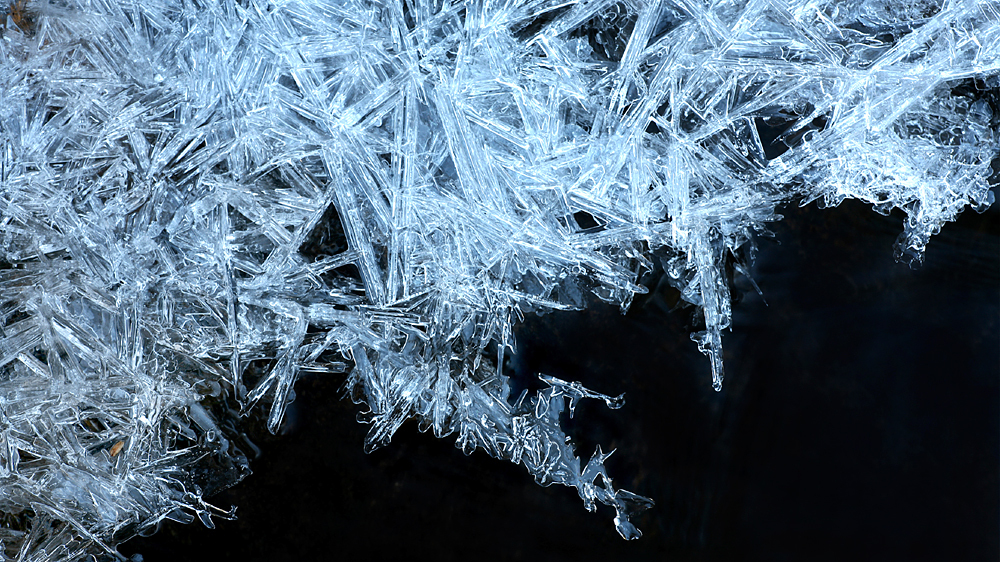 A close-up of ice crystals.

Freeze Me, Blast Me, Shatter Me

Before we finish, I just wanted to mention that when a reporter encounters a new idea -- and for me "beetleizing" was a startling notion that I am only just beginning to understand -- what we do is we ask lots of questions. To lots of people. And along the way I had a startling conversation with Krishna Andavolu, the managing editor of Obit Magazine, an online 'zine and podcast about the funeral/mortuary business.

He says that there are already companies trying to serve the Get-Me-In-The-Ground-Where-I-Can-Be-Recycled market, including a service called "promession." I'd never heard of promession. I bet you haven't either. It's a new service, where they flash-freeze you when you die and then hit you with an ultrasound wave that shatters you into little pieces -- like broken pellets of glass from a crushed auto window -- so you can be scattered wherever your family pleases.

Here's Krishna explaining how it would work -- and you really need to listen to it to hear all the provocative and jaw-dropping details.

I don't know if I'm ready for this Greener-Than-Thou world, but certainly the conversation with Bernd Heinrich has me thinking.