Accessibility links
Obama's Missile Plan Decision: What It Means Reversing a major Bush administration initiative, President Obama abandoned plans Thursday to deploy a controversial U.S. missile defense system in Poland and the Czech Republic. A look at the system, the decision and what it could mean for U.S. relations and national security.

Defense Secretary Robert Gates (center) and other officials inspect missiles housed underground at Fort Greely in Alaska on June 1. The missile defense system in the works in Alaska is similar to the plan that the Bush administration had proposed for Europe — which President Obama reversed on Thursday. John Wagner/Fairbanks Daily News-Miner via AP hide caption 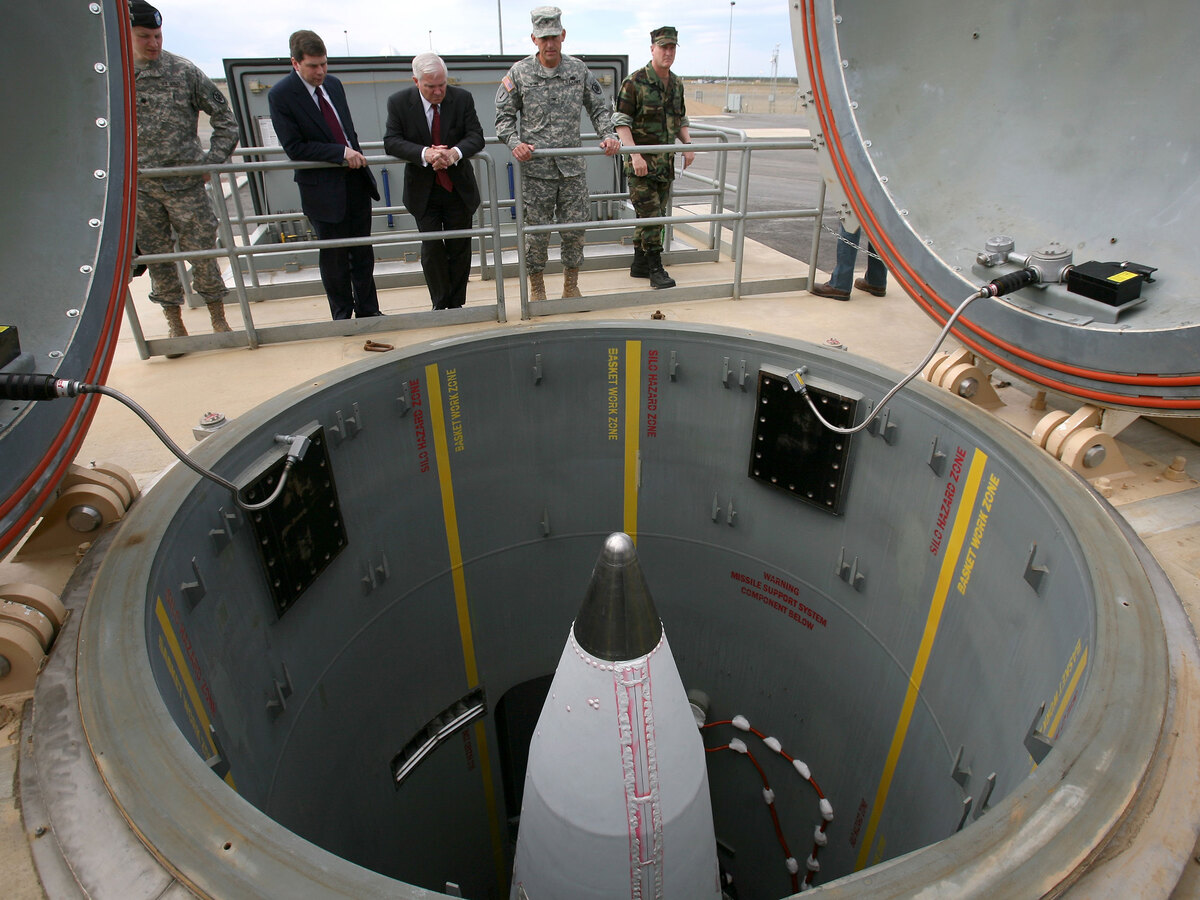 Defense Secretary Robert Gates (center) and other officials inspect missiles housed underground at Fort Greely in Alaska on June 1. The missile defense system in the works in Alaska is similar to the plan that the Bush administration had proposed for Europe — which President Obama reversed on Thursday.

President Obama's decision to abandon plans to deploy a controversial U.S. missile defense system in Europe reverses a major Bush administration initiative and sheds new light on how Washington plans to address global security against nuclear threats and on U.S. foreign relations in the Obama era.

Here's a look at the old system, what Obama is proposing to do instead, and what the decision could mean:

What was the goal of the missile-defense plan?

The system was aimed at defending Europe and the United States against the potential threat of long-range missiles being fired by Iran or North Korea.

The Bush administration wanted to deploy up to 10 ground-based missile launchers at a former military base in Poland. The interceptor missiles were still undergoing testing, and there were lingering question about their effectiveness.

The Czech Republic was going to host a radar site for the system, and U.S. officials were planning to put another radar system in a third, unnamed European country.

And there was a problem with that?

The Bush-era plan created a severe diplomatic rift with Russia. Other critics charged the system — with a price tag estimated at $4 billion — was too expensive, faced daunting technological challenges and was aimed against a threat that is still years away from materializing.

What's the Obama administration proposing instead?

In its place, Obama approved a new missile defense plan that he said would be "smarter, stronger, and swifter." It would focus first on the threat from shorter-range missiles, a capability that Iran is developing more actively.

Secretary of Defense Robert Gates said that the new plan also relies more on existing technology. "We can now field initial elements of the system to protect our forces in Europe and our allies roughly six to seven years earlier than the original plan," Gates told reporters.

But would the Bush plan have worked?

It is hard to say. The technological challenges of trying to hit a missile in midair are daunting, but it becomes even harder when trying to intercept a fast-moving, long-range missile from thousands of miles away.

A series of Pentagon test flights in recent years produced mixed results. While the interceptor missiles did destroy their targets in some tests, others failed. Critics were also concerned that the Pentagon's testing was not rigorous enough, particularly when it came to potential countermeasures that adversaries could have used.

The EastWest Institute, a global think tank, assembled a group of leading U.S. and Russian technical experts to evaluate missile defense. Their report, issued in May, found that the U.S. plan had "serious weaknesses and would not be able to provide a dependable defense against [long-range missiles] launched from Iran, if such a threat were to emerge."

So if the technology was so challenging, what made Bush officials feel so strongly about the need for European missile defense?

The short answer is Iran. Under the Bush administration, U.S. officials frequently said Iran was driving hard on its missile program, particularly with its efforts to develop missiles capable of carrying nuclear weapons.

And something has changed?

When it came to Iran's nuclear program, U.S. intelligence agencies were forced to revise their estimates of how fast Iran was moving. In particular, by early 2008, top U.S. officials were saying that Iran had apparently halted its weapons design activities in the fall of 2003 and had not resumed them as of mid-2007.

So, is there still a threat?

Maybe. The more important question is how immediate the threat could be.

On the missile side, U.S. intelligence assessments have long focused more on the threat from short- and medium-range missiles, noting that Iran's arsenal posed a growing threat to U.S. forces operating in the Persian Gulf region. As Director of National Intelligence Dennis Blair told Congress earlier this year, Iran has the largest inventory of ballistic missiles in the Middle East.

In announcing his new missile defense plan on Thursday, Obama cited new U.S. intelligence assessments, which find that the threat from Iran's short- and medium-range missiles is developing more rapidly than previously projected. But U.S. spy agencies have always had little evidence that Iran is dedicating significant resources to the kind of long-range missiles that could reach central Europe.

In its assessment earlier this year, the EastWest Institute concluded, "Without a significant influx of additional technology, it does not appear that Iran would be able to build a modern, silo-based, rapid-launch [intercontinental ballistic missile] for at least 10 to 15 years, even if it decided now to do so. There is no evidence that Iran has taken such a decision."

What about the potential threat from North Korea or elsewhere?

Other parts of the U.S. missile defense plan are continuing, including the deployment of interceptor sites in Alaska and California, which are aimed primarily at containing the threat from North Korea.

In recent years, the Pentagon has also placed a growing emphasis on sea-based missile defense systems, which can be operated from Navy ships operating anywhere in the world.

Gates said that in the short term, Aegis ships equipped with interceptors would be used to defend European allies, while a land-based system could still be fielded starting in about 2015.

"I believe this new approach provides a better missile defense capability for our forces in Europe, for our European allies and eventually for our homeland than the program I recommended almost three years ago," Gates said. "It is more adapted to the threat we see developing and takes advantage of new technical capabilities available to us today."

But the Polish and Czech governments were eager to have the missile defense sites. Are they angry now?

It depends on whom you ask. Official reaction in the two countries was muted, in part because the move has long been expected.

The move is embarrassing for the Polish and Czech leaders who negotiated the missile defense agreements, but the systems were never that popular among the public in those countries. Both the Poles and the Czechs were also worried about Russia's angry opposition to the plan, and many feared retaliation.

For officials in Poland in particular, the missile defense system had been less about a threat from Iran than it was a mechanism to secure a permanent deployment of U.S. soldiers on its territory.

Does Obama's move provide a new opening with Russia?

Probably. Russian President Dmitry Medvedev welcomed Obama's decision, but he made no mention of any return gestures. "We appreciate this responsible move by the U.S. president toward realizing our agreement," he said. "I am prepared to continue the dialogue."

Many in Moscow believed that missile defense was secretly aimed at containing Russia.

When Obama took office, he said that wanted to "reset" U.S. relations with Russia, and by ending the European component of the missile defense program, he removed one of the biggest stumbling blocks to that goal.

Relations between Washington and Moscow have been under severe strain since midway through the Bush administration.

There was additional resentment that former Soviet bloc states like Poland and the Czech Republic would be hosting the U.S. facilities. Russian Prime Minister Vladimir Putin once likened it the 1962 Cuban missile crisis, when Soviet officials tried to station missiles in Cuba.

And at home, how did Republicans react to the news?

Republicans say they are worried about sending the wrong message to Eastern Europe.

"Scrapping our missile defense effort in Europe has severe consequences for our diplomatic relations and weakens our national security," Rep. Eric Cantor, the second-ranking Republican in the House, said in a statement. "Our allies, especially Poland and the Czech Republic, deserve better and our people deserve smarter and safer."