In 1941, Walt Disney headed south of the border. It was the eve of America's entry into World War II, and President Franklin Roosevelt enlisted the creator of Mickey Mouse.

The president sent Disney to Latin America, where the influence of Nazis and fascists was growing. So Disney went with 16 of his artists on an extended trip to Brazil, Argentina and Chile. One of the artists was Frank Thomas, the legendary animator who made the seven dwarfs cry and Pinocchio sing. His son Ted has written and produced a new documentary about that adventure. It's called "Walt & El Grupo." He joins us from our studios at NPR West. Thank you so much for joining us.

DEL BARCO: In your documentary, we see Walt Disney and El Grupo, the group, dancing with the locals and riding horses and sightseeing and going to an awful lot of parties. I know that they met with local artists, and they learned about the folklore of the regions. It was actually, frankly, an adventure I would have loved to have been on myself.

DEL BARCO: Well, you included this comment from Walt Disney in your documentary.

Mr. WALT DISNEY (Animator): These are souvenirs of a memorable occasion, a time a group of us, artists, writers and musicians, toured South America. It was our first expedition of that kind, a sort of a search for new songs, dances, plots and personalities for our cartoons.

DEL BARCO: I know that at the time, there were other cultural emissaries who traveled on behalf of the Good Neighbor Policy, like Errol Flynn and Douglas Fairbanks, Jr., and even filmmaker Orson Welles, who captured Brazil brilliantly, I thought, but I wanted to find out from you how much diplomacy actually got done by Walt Disney and El Grupo at the time.

Mr. THOMAS: People-to-people diplomacy - I think an awful lot. In terms of being de facto diplomats, less, of course. He did meet Getulio Vargas, who was the president of Brazil at that time, and he also met the president and vice president of Argentina. This was a year before Peron came to power.

By the time he got to Chile, he made it clear that he only wanted to meet with fellow artists. He had had enough of the handshaking with elected officials.

DEL BARCO: And at the time, they didn't just shake hands, but they did a lot of illustrations of the people and the scenery during that trip, and I know that it inspired at least one cartoon of El Pato Donald, Donald Duck, who meets up with a Brazilian parrot.

Unidentified Man #1 (Actor): (As Ze Carioca) I will show you the land of the samba.

Mr. THOMAS: Well, you know, and of course, some of the artists on this trip who could imitate Donald - I can't, you know, I can't…

DEL BARCO: That was pretty good.

Mr. THOMAS: But the people who can, you know, were immediate celebrities. The fact that they could draw quick sketches, that was good, but if they could talk like Donald Duck, wow, it was over the moon.

DEL BARCO: But at that time, Disney animators in Burbank back at home were on strike, and I'm wondering how that impacted the group's reception in Latin America.

Mr. THOMAS: Some of the fascist newspapers, particularly in Argentina, were sort of laying in wait for the Disney party to show up because they wanted to show that Disney was an insensitive, capitalist boss because his workers back in California were on strike. But time and again throughout their tour of South America, whenever the Disney party showed up, it just swept aside the fascist demonstrators who, you know, tried to make a big deal out of it.

The popularity of the Disney films of that time in Latin America was really phenomenal. From the very beginning, the Disney studio did a great job of finding a comparative voice in another culture, in another language that fit the character of whoever it was in the film, and I think that contributed an awful lot to the success of the pictures.

DEL BARCO: You, yourself, are a jazz musician, I hear.

DEL BARCO: I love Brazilian music in particular, and I know it was also a very important part of that trip. Can you talk about some of the music that they discovered in South America?

Mr. THOMAS: Sure. Well, you know, the first stop, and I think the one that made the biggest impression on them, was Brazil, and it was different and colorful and a riot of sound. I really think it knocked their socks off. And at that time, no one back in the States had heard the samba. It really wasn't known across the country yet, and when the Disney group heard the samba, they knew right away that that was something that they wanted to integrate into one of the stories that they were going to do.

By the time they got to Argentina, they knew that their focus would be a folkloric one rather than a contemporary one. So they were very interested in gaucho lore and folkloric music and dances.

DEL BARCO: I wish we had more time to talk about your film, but you know, we'll have to have people watch it themselves. I just wanted to go out of this segment with some of the music that is just so great. I mean, some of the classics like (foreign language spoken) and of course, "Brazil."

DEL BARCO: Well, thank you so much Ted Thomas. He wrote and produced the documentary "Walt & El Grupo." The film is playing in New York and Los Angeles, and it will open in different parts of the country. You can check out the movie release schedule just by turning to TELL ME MORE at npr.org. Ted Thomas, thank you so much.

Mr. THOMAS: It's so great to talk with you.

DEL BARCO: Coming up, a plan to improve Latino health by watching television. We'll hear about telenovelas that feature health tips. This is TELL ME MORE from NPR News. I'm Mandalit Del Barco. 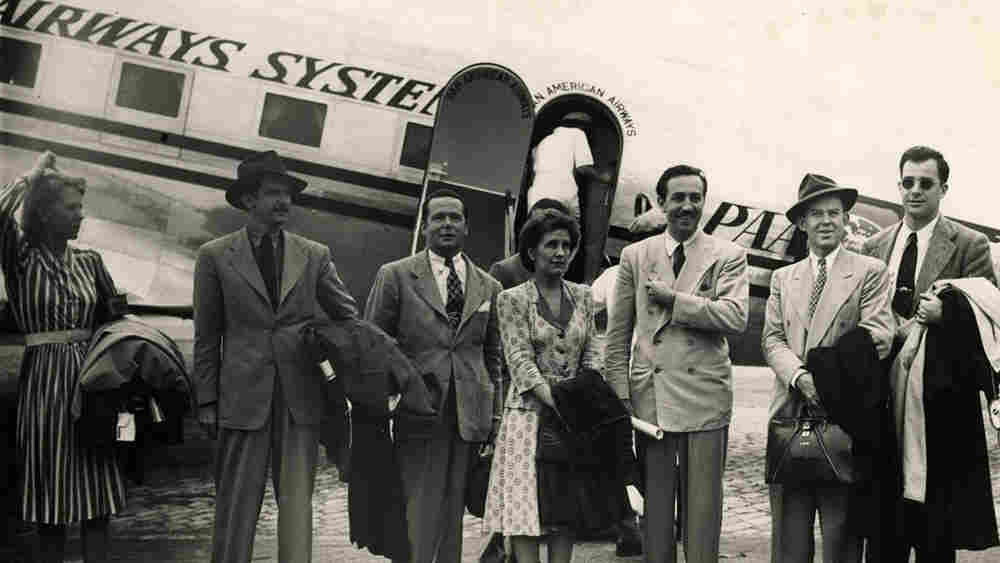 You'd think the Disney studio would have been riding high in 1941. Snow White and Pinocchio had been huge hits; Dumbo and Bambi were in pre-production. But world affairs were cramping Walt Disney's style — especially a war in Europe that was drying up foreign markets and capital.

Then an animator's strike at the House the Mouse Built left the filmmaker seriously depressed. By the time the Roosevelt administration came calling, urging him to make a goodwill tour of Latin America to help counter the diplomatic inroads Nazi Germany was making there, he was eager to get away.

He wasn't eager to just shake a lot of hands, though, so Disney got the government to send his top animators with him, and made it a working tour. The idea was to research future films by soaking up the sights and sounds of Latin America. And, as the entertainingly hagiographic documentary Walt & El Grupo establishes, soak they did.

'In His Own Voice'

Filmmaker Ted Thomas is the son of famed Disney animator Frank Thomas, who made the trip. With the cooperation of the Disney studio, as well as the families of the other animators, he was granted access to a mother lode of documentary material. There were letters these working tourists wrote home, sketchbooks they filled and, more to the documentary's point, photos of them filling them — staring, say, at a live parrot and sketching away in the early stages of creating their cigar-smoking animated parrot, Joe Carioca.

Perhaps more than the colorful foliage and animals they discovered, it was the rhythms captured on this trip that were a revelation to the Disney group — "el Grupo," as they began calling themselves. They went to nightclubs and more formal functions, heard the samba and the tango, watched black dancers at candombe and witnessed how the songs fit with Latin American life.

This was an era when international travel was not yet common, and in 16mm home movies from the trip, you can see the excitement as 1940s cities burst into gaudy state welcomes for the creator of El Raton Mickey.

The state department evidently got it right. More than a decade before Walt Disney became a familiar face on American TV, the crowds that surged to greet him in Rio de Janeiro, Montevideo, Buenos Aires and other cities suggest that this was one goodwill tour that actually generated goodwill. 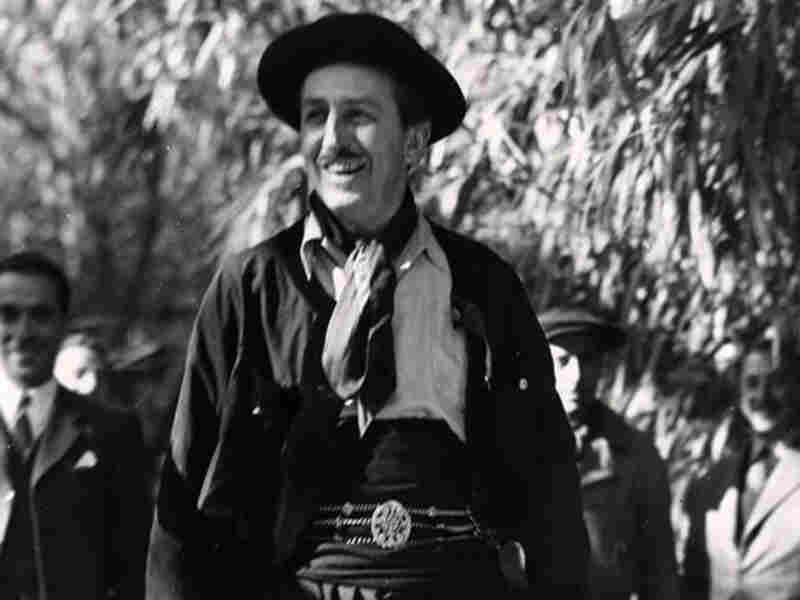 In Character: Cartoonists in Argentina hosted a barbecue during Disney's visit. He showed up in full gaucho dress, and many joked that he looked more authentic than his hosts. courtesy of Brian Lansburgh hide caption 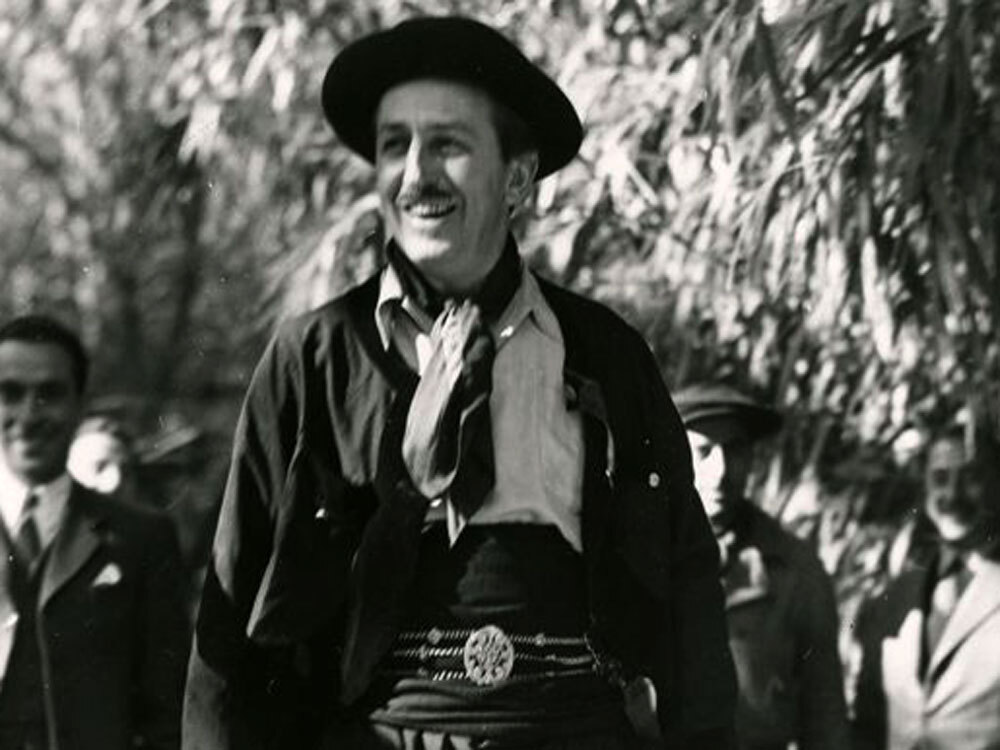 In Character: Cartoonists in Argentina hosted a barbecue during Disney's visit. He showed up in full gaucho dress, and many joked that he looked more authentic than his hosts.

Happily, the documentary doesn't settle for showing that. The filmmakers went to the hotels Disney stayed at, visited the same rooms and then mixed new footage with the old, so that the onscreen image can fade from a sketch of Donald Duck sitting on a balcony with a mountain in the background to a shot that is clearly that same balcony, with Rio's Sugarloaf Mountain in the background.

The filmmakers also found some of the folks who performed for Disney, including an ancient, almost toothless dancer who narrates footage of his 20-year-old self stomping and twirling as Disney looked on, all those years ago.

In his later life, Walt Disney would develop a reputation as a control freak with a dark side. But on this trip, he was not yet 40 and still willing to wear a gaucho costume and twirl a lasso, just as Goofy would in a cartoon that emerged from the trip.

The Oscar-nominated movies Saludos Amigos and Three Caballeros were the immediate result of the trip — filled with stereotypes, yes, but comparatively friendly ones. The state department was pushing a good-neighbor policy, remember.

And, in return for a guarantee in case the films didn't earn their money back at the box office (which they did), Walt Disney and el Grupo were happy to promote the idea that it's a small world, after all.