Accessibility links
Palestinian TV Show Satirizes Life, Leaders Country on a String is unusual in the Arab world — a comedy sketch show that takes aim at Palestinian leaders on the TV channel they control. The popular show debuted during the Muslim holy month of Ramadan. 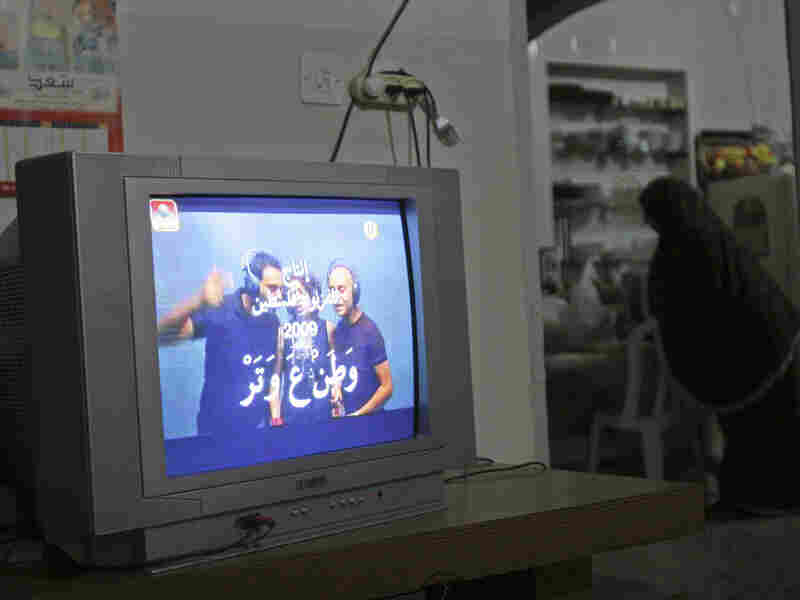 A Palestinian woman works in the kitchen while listening to the TV program Country on a String in the West Bank city of Nablus. The irreverent comedy show mocks and often bites the hand that feeds it: the government. Majdi Mohammed/AP hide caption 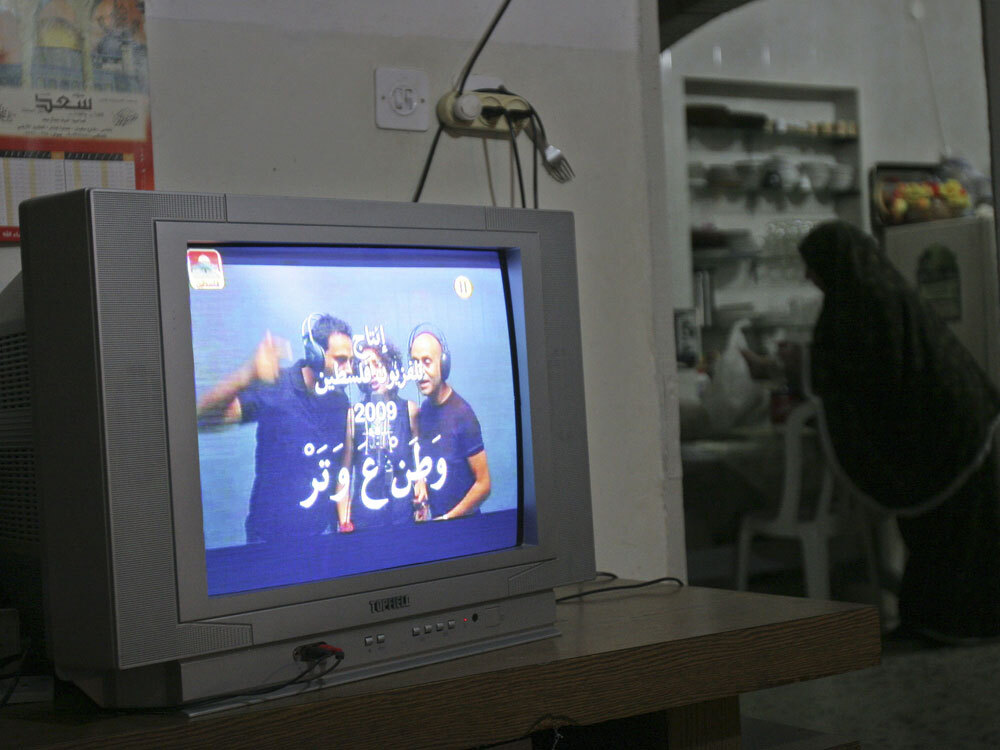 A Palestinian woman works in the kitchen while listening to the TV program Country on a String in the West Bank city of Nablus. The irreverent comedy show mocks and often bites the hand that feeds it: the government.

Packed into a tiny editing booth in the West Bank city of Ramallah, the cast and crew of a new TV comedy show watch as a 10-minute comedy sketch is put together.

In it, the show's three actors play President Obama, his press secretary and a hapless journalist.

Earlier episodes have lampooned Hamas in Gaza and the Palestinian leadership in the West Bank. One memorable skit takes place 500 years in the future and shows Palestinian President Mahmoud Abbas still trying to negotiate a Middle East peace deal with Israel.

Watan ala Watar, or Country on a String, is unusual in the Arab world — it's a satirical comedy sketch show that takes aim not only at the absurdity of life under Israeli occupation, but also at Palestinian leaders on the TV channel they control. The show's popularity has grown rapidly since its debut during the Muslim holy month of Ramadan.

Actress Manal Awad says the comedy trio at the heart of the show relishes taking aim at the high and mighty.

"We didn't imagine it would be such a popular show. Every day, [its] audience is increasing. We're happy for that," she says.

Awad says the secret of the show's success is its humor.

"Palestinians are really good at complaining, and now we turn it into criticizing, but we do it in a funny way. We are from the people, we are from the street, and we feel the only tool that we have is our art to say our opinion about what happens," she says.

The creative force behind the show is Imad Farajin, who writes, acts and sometimes directs the segments.

"I get my inspiration from listening to my mother, my father, to the taxi driver," he says.

The plight of Palestinians living under occupation is another inspiration. The absurdity of Palestinian life, Farajin says, is often a theme.

"We have created a certain kind of democracy. It shows our people — they can speak out, but there is also a message to the region. We are telling Lebanon to speak out, Jordan to speak out, all the actors of the region should speak out," he says.

Yasser Abed Rabbo, a close adviser to Abbas, is the head of the government-run Palestine TV and was instrumental in getting the show on the air.

Abed Rabbo says it has been a hit with viewers because it is real.

And that's what Abed Rabbo says he is hoping to achieve. This show is only a first step.

"We will turn the official TV channel into a very independent TV that will deal with all issues that our society suffers from. We blame the occupation for so many of our problems, and we are right to do so, but there are also other problems that we should blame ourselves for," he says.

In one Ramallah home on a recent night, a family sits down for the traditional iftar meal after a long day of Ramadan fasting. Promptly at 7:35 p.m., many diners get up from the table and move to the TV room: It's time for Country on a String to begin. Children and parents crowd around the TV set.

The scene opens with "President Obama" arriving in the Palestinian territories after just passing through an Israeli checkpoint. On this night, Abed Rabbo is a guest star. Playing himself, he greets "Obama."

In the sketch, the U.S. president is portrayed as clueless about the reality of life in the territories.

"Mr. Erekat didn't tell me about the checkpoints here in Palestine," the Obama character says in the skit.

Saeb Erekat is the veteran Palestinian negotiator. Abed Rabbo responds, "There are many things Saeb Erekat doesn't tell us, either."

The line gets a laugh from the group.

One of the viewers, Sami Batrawi, says this is the first Palestinian-produced series that he has wanted to watch.

"It's a good show, and it touches a lot of political things," he says, adding that his enjoyment is bittersweet.

"It's black humor. Sometimes it hurts to laugh, because you are laughing at yourself," he says.