Accessibility links
High School Football And Ramadan Some high school Muslim football players are fasting during the holy month of Ramadan, even as they practice several hours a day each week. 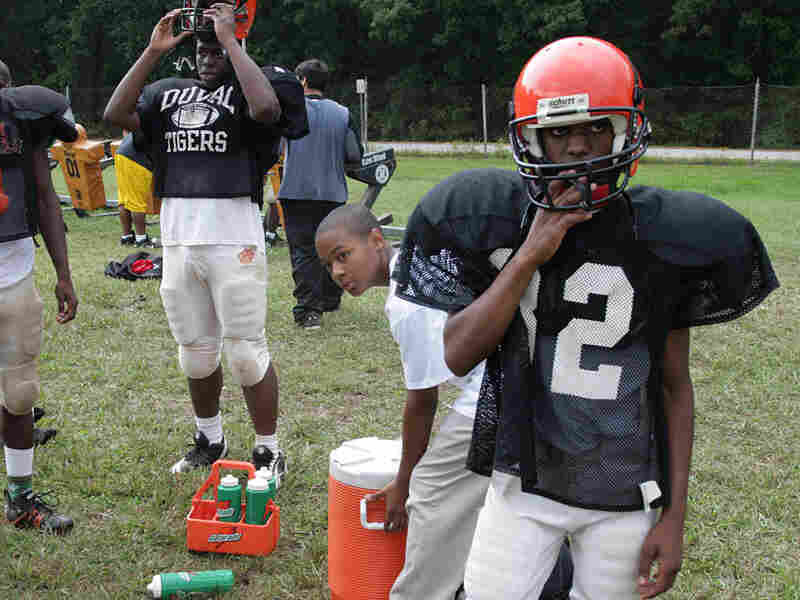 Thierno Diallo (14) number 32 stands to the side as his teammates take a water break on the field at a football practice at Duval High School in Lanham, MD. Diallo has been keeping up with his teammates during the football season without food or water during the day. Habiba Nosheen/NPR hide caption 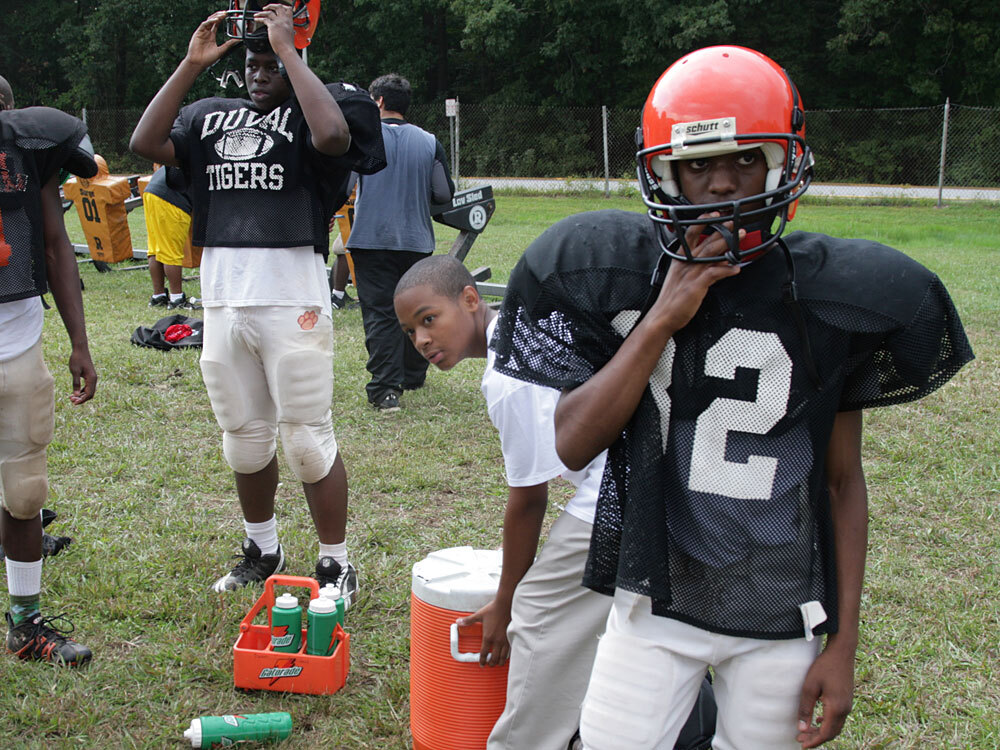 Thierno Diallo (14) number 32 stands to the side as his teammates take a water break on the field at a football practice at Duval High School in Lanham, MD. Diallo has been keeping up with his teammates during the football season without food or water during the day.

Football practice is a grueling rite of passage for many high school boys, but for some Muslim students, thirst and hunger are added to the physical exertion if they decide to fast during the holy month of Ramadan.

Thierno Diallo, 14, plays cornerback for the DuVal High Tigers in Lanham, Md. He's one of a few Muslims on the team, but the only one fasting. He watches the rest of the players take off their helmets and chug on ice cold water bottles between practice sets, but doesn't take a drink himself.

As the smallest member of the team at just 5 feet 3 inches tall and 107 pounds, he's nicknamed "Squirt." Diallo is anxious to show that he has the right stuff. Ramadan or not, it's important that he doesn't show any weakness. "No problem, it doesn't bother me at all," he says, shrugging his shoulders like it's no big deal.

Coach Chuck Pope keeps a close eye on him, watching to make sure he doesn't become dehydrated during practice.

"A few weeks ago was rough for him, real rough, because we were up in 85-degree weather," Pope says. "Now, you can see the difference because he's coming to the end of his fast, now he's more accustomed to it." He's talking about the "two a days" twice-daily practice sessions that kick off football training — and coincided with the beginning of Ramadan.

There's a lot of debate on whether Muslim athletes should adhere to the dawn-to-dusk fast during Ramadan. There are even Web sites in which Muslim players exchange advice on whether to hide the fact that they're fasting from their coaches. As in Diallo's case, most advise being up front about it.

Many professional Muslim athletes do not fast because their training is so intense. According to the Quran, anyone who is traveling is exempt. That also applies for children, the sick, elderly and pregnant women. For Diallo, this is both the first year for football and the first year of fasting for the entire month.

"I always wanted to play football, but my parents said I had to fast this year because I was getting more mature," he says.

Diallo's ability to fast while keeping up with the intense workouts has impressed his teammates, many of whom eat and drink copiously to maintain the calories and hydration they need for practice.

Helmet in one hand, 15-year-old wide receiver Joshua Jack lists his so far today: breakfast cereal, chips, a burrito for lunch, along with milk, juice and applesauce. He can't imagine being in Diallo's shoes.

"With this training, I don't think I could do that," he says. "I can't go without water — [not] with training like this."